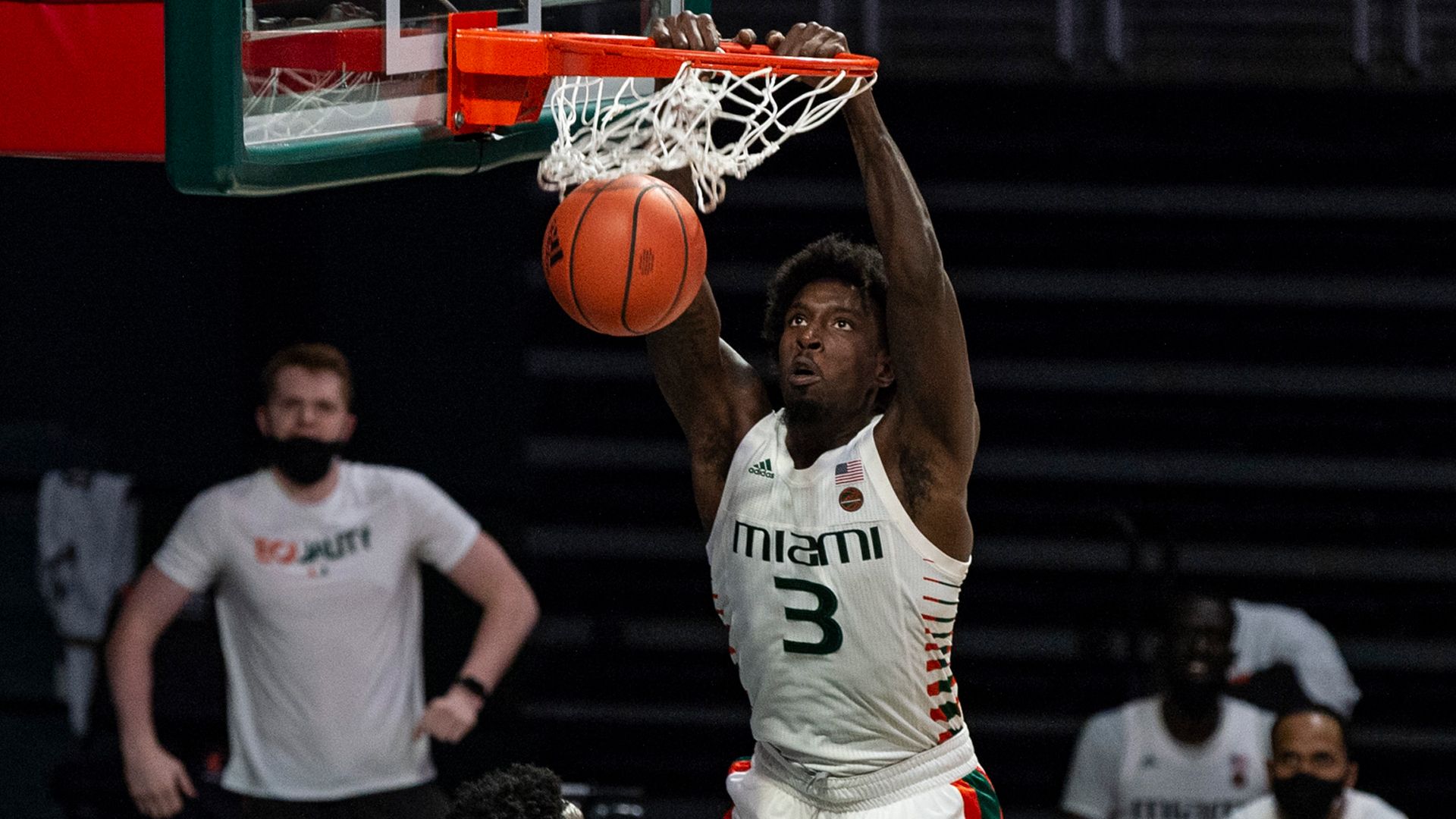 Redshirt senior guard Kameron McGusty scored a season- and game-high 27 points to lead the Hurricanes, who again had only six available scholarship players, on Senior Night at the Watsco Center.

“To me, Senior Night is very, very special and you want your seniors to go out on a positive note,” Miami head coach Jim Larrañaga said after becoming the 16th coach to log 100 ACC wins (regular season or tournament). “It’s their last home game and we’ve always put a lot of emphasis on honoring our seniors by playing really, really hard and really well on their behalf.”

Redshirt senior center Nysier Brooks scored 16 points—already a season best and one shy of a career high—in the opening 20 minutes. McGusty added 12 first-half points for the Hurricanes, as the veterans stepped up with leading scorer Isaiah Wong, a sophomore guard, limited to zero points in just seven first-half minutes because of early foul trouble.

The Hurricanes extended their edge to a game-high nine points, 66-57, with exactly 8:00 on the clock, after making five consecutive field goals. They then, though, went scoreless for four-plus minutes with seven straight misses, while Boston College posted an 11-0 run, featuring a trio of 3-pointers, to take a 68-66 advantage with 3:40 to play.

McGusty countered with seven straight points, beginning a 9-0 run that gave Miami a 75-68 edge with 1:49 to go. The Eagled eventually sliced their deficit to three, 79-76, on a 3-pointer with 6.4 ticks left, but Wong iced the game with a free throw at the other end.

McGusty’s 27 points, one shy of his career high, came on 9-of-12 shooting from the floor, as he tied a career best in in makes. The Katy, Texas, native, who had nine of Miami’s final 14 points, shot 4-of-7 beyond the arc, good for a season high in made 3-pointers, and hit all five of his free throws. He added a co-team-high five assists in the victory.

Brooks finished with a career-best 21 points, logging an 8-of-11 mark from the field and a 5-of-8 tally at the line. His eight made field goals set a career high, while his team-best three blocks set a season high.

“To have two of [our seniors] have career nights, Nysier Brooks and Kam McGusty, was really special,” Larrañaga said. “I’m very, very happy for them. I’m happy for the team. I’m happy that we’re going into the ACC Tournament on a win.”

Sophomore forward Anthony Walker tallied 17 points, one off his career best, pulled down seven rebounds and dished out a career-high four assists. Wong finished with nine points and five assists, while senior guard Elijah Olaniyi, who sat for just 15 seconds, co-led all players with eight rebounds.

Sophomore forward CJ Felder notched 10 points and six blocked shots, the latter mark the most by a Miami opponent all season. Sophomore guard Jay Heath, the Eagles’ leading scorer, chipped in 10 points, but the Hurricanes limited him to 4-of-16 shooting, including 2-of-10 from deep. Boston College became the first team to have six double-digit scorers against Miami since Florida State on Jan. 27, 2018.

MIAMI HURRICANES POSTGAME NOTES
– The Hurricanes moved to 26-27 all-time against Boston College, their fourth-most wins against any Division I opponent, including 15-11 at home and 13-3 in Larrañaga’s tenure.
– Larrañaga, who entered the game with the 11th-most victories of any active Division I coach, is now 668-463 in 37 years as a head coach, including 198-129 in 10 seasons at Miami.
– Larrañaga is not only the 16th coach all-time to record 100 ACC wins (regular season or tournament), but just the fifth active coach to do so.
– In addition, Larrañaga tied Gary Williams for No. 36 on the all-time Division I wins list with his 668 triumphs.
– The Hurricanes are now 9-1 on Senior Day under Larrañaga, with five consecutive victories dating back to 2015-16.
– In addition, Miami is now 9-1 in its final home game of a season—including the postseason NIT—under Larrañaga, with nine straight wins going back to 2012-13.
– For the first time this season, Miami used a starting lineup of Brooks, McGusty, Olaniyi, redshirt junior forward Deng Gak and senior guard Willie Herenton.
– With Herenton making his first collegiate start and Gak notching his third, the Hurricanes have now used 12 different opening lineups in 2020-21.
– Friday snapped a 36-game streak of starting nods for Wong, whose last game off the bench was 1/21/20 at eighth-ranked Duke.
– For the fifth straight game, Miami played without five scholarship players, all of whom are out for the season, due to injury: sophomore guard Harlond Beverly (back), senior guard Chris Lykes (left ankle), redshirt senior center Rodney Miller Jr. (right knee), freshman guard Earl Timberlake (left shoulder) and redshirt senior forward Sam Waardenburg (left foot).
– Prior to the game, the Hurricanes honored eight senior student-athletes—Brooks, Gak, Herenton, Olaniyi, Lykes, McGusty, Miller, Waardenburg—and one manager, Eric Winn.
– Miami finished the regular season as the lone team in the ACC to play 19 conference games and the one of only two to face every other team at least once.
– The Hurricanes’ 80 points marked their second-most in 2020-21, trailing only the 82 they logged on 12/4/20 against Stetson in the second game of the season.
– The aforementioned last game in which six opposing players had 10-plus points versus Miami, 1/27/18 against Florida State, was an overtime contest in Tallahassee, Fla.
– The last time multiple Hurricanes scored 20-plus points in a game was 2/19/20 in a triple-overtime contest at Virginia Tech when McGusty (21), Lykes (23) and Wong (27) did so.
– Miami held Boston College without a point for multiple stretches of three-plus minutes during the first half.
– Felder is the only player to block at least five shots against Miami this season and he did so in both of the Hurricanes’ matchups with Boston College.
– The last time a Miami opponent had six blocked shots in a game was 11/24/19 when UConn’s Akok Akok did so in Charleston, S.C.
– The 16 points Brooks scored in the first half not only eclipsed his full game high in all his prior outings as a Hurricane, but also his combined point total (10) from the last three games.
– Brooks shot 6-of-8 from the floor and 4-of-5 at the line in the first half, with the six makes already setting a season high and matching a career best.
– Before Friday, Brooks’ career-high point total was 17, logged twice while at Cincinnati, on both 12/22/18 against South Carolina State and 1/12/19 versus UConn
– Brooks’ prior top mark in made field goals was six, recorded thrice while at Cincinnati, on 1/5/19 at East Carolina, 1/12/19 against UConn and 2/10/19 at Houston.
– Brooks, who surpassed 600 points as a collegian, scored in double figures for the 21st time, including the seventh this season, and notched 20 points for the first time.
– Gak moved past 500 minutes played at Miami.
– Walker, who eclipsed 150 rebounds and reached 300 points as a Hurricane, scored in double digits for the 13th time, including the 12th in 2020-21.
– Additionally, Walker logged his highest point total in an ACC game, passing the mark of 16 he notched twice previously, as well as and set a career high for made free throws in an ACC contest.
– McGusty, who surpassed 1,150 points and 300 rebounds in his career, tallied double-digit points for the 60th time, including the 11th this year, and reached 20-plus points for the 12th time, including the second this year.
– McGusty posted his third five-assist performance, including his second of 2020-21, with both coming in the last three games.
– The other time McGusty recorded nine made field goals was on 12/21/19 against Coppin State, when he scored a career-best 28 points.
– Wong, who reached 650 points and surpassed 1,500 minutes played as a collegian, registered his third five-assist outing, all of which have come this season.
– Herenton played 14 minutes Friday night, good for the third-most by a Miami non-scholarship walk-on since the program joined the ACC in 2004-05, trailing only two previous marks he logged this year.