CORAL GABLES, Fla. – There are, as Jess Simpson has noted, just 32 places where one can coach defensive linemen in the National Football League.

But there’s only one University of Miami – which is why Simpson is back in Coral Gables after a two-year stint coaching the defensive line with his hometown Atlanta Falcons.

“It’s the Miami Hurricanes. I’m a defensive line coach. There’s not a lot of spots in the world better to coach than at Miami if you’re a d-line guy,” said Simpson, who coached Miami’s defensive line in 2018 and returned to join head coach Manny Diaz’s staff in January. “We’ve got such a strong tradition of how this defensive line has played throughout the years as a unit and all the great individual players that have come through here.

“That tradition … I think that’s so important.”

With the start of spring practice now just two weeks away, Simpson is the newest coach entrusted with carrying on that tradition. It’s a responsibility he doesn’t take lightly.

He understands the defensive end position, where the Hurricanes have excelled in recent seasons, is in transition after the departures of veteran leaders Jaelan Phillips and Quincy Roche, both of whom stepped up after Greg Rousseau opted out of the 2020 season.

But he has high hopes – and expectations – for what he believes is a promising group that features a high-profile graduate transfer, a veteran leader lining up at a new position and a number of young players eager to prove they’re ready for the opportunity to start.

One factor working for both Simpson and those players? Familiarity.

BEHIND THE U PODCAST: Jess Simpson

The coach returned to Miami already knowing most of the players he’ll be coaching. He’s already worked closely with his new boss, who was the Hurricanes’ defensive coordinator when Simpson was at Miami previously. And Simpson already knows Miami’s defensive scheme, where he believes linemen can thrive.

“The style of play, the way we coach, it’s a fun system,” Simpson explained. “We’re not asking guys to play on the line and eat blocks. We’re getting guys to play the game the way it’s supposed to be played. It’s vertical and penetrating and it’s just a fun style of ball.”

"We’re getting guys to play the game the way it’s supposed to be played. It’s vertical and penetrating and it’s just a fun style of ball.”

And after two years with the Falcons, Simpson brings with him plenty of NFL knowledge that can only help Miami’s linemen as they strive to help the Hurricanes win games while raising their eventual draft stock in the process.

Acquiring that knowledge and coaching in the NFL was the latest step in a five-year journey that Simpson says has helped him grow after a 22-year career at Georgia’s Buford High School.

In late 2016, Simpson moved to the college ranks, where he spent time as the defensive line coach and assistant head coach at Georgia State. He later he joined the Falcons’ staff as a defensive assistant in 2017 before former Hurricanes coach Mark Richt brought him to Miami in 2018.

Each stop pushed Simpson further out of his comfort zone and taught him something new about his craft.

“I think my journey as a coach the last five years has helped me,” Simpson said. “I went to Atlanta as the assistant d-line coach in ’17 and that was a huge growth experience, something totally new. Being at Buford for 20-something years, being the head coach the last 12, you don’t want to say you’ve gotten comfortable but when everything is the way you want it and it’s yours, you’re doing the teaching. You’re not doing the learning and I threw myself into a new learning environment.

“Then coming here in ’18, same thing. I’m learning new people, learning a new system and you’re doing all that on the fly … Part of coming back here in the role that I was when I left has helped make it such a smooth, fun transition for me that it’s been invigorating. … I tell players all the time, ‘You’re either getting better or getting worse’ and that’s true for us coaches, too. I just feel like I’ve had a lot of growth, not only the last two years, but really the last five years as a coach. It’s exciting to be able to share that.”

That experience – and Simpson’s past success at Miami – made him a natural choice for Diaz, who intends to call plays for Miami’s defense this season. 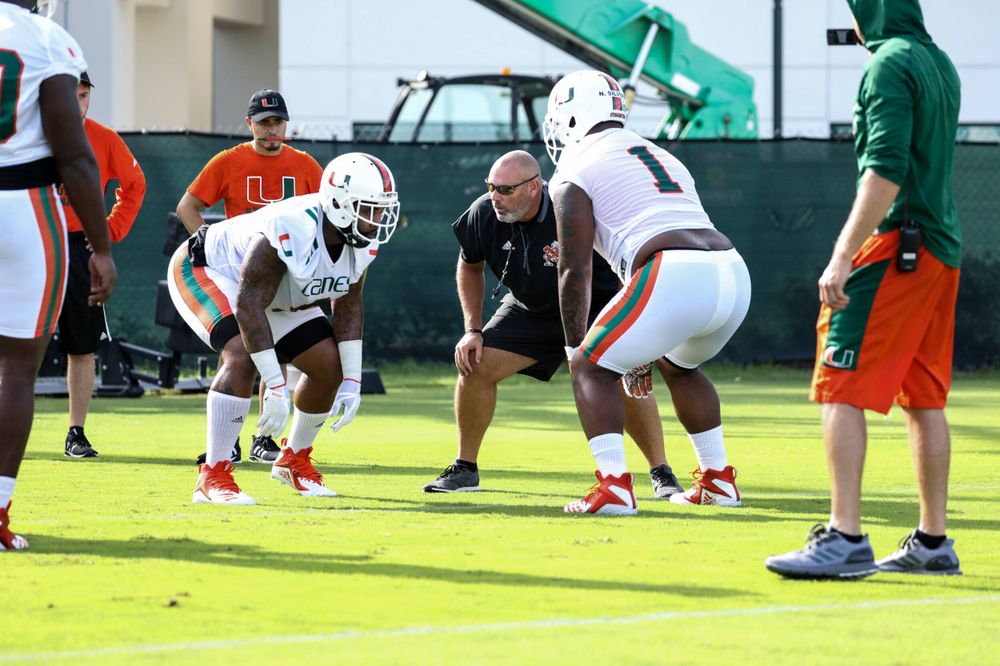 In 2018, with Diaz leading the defense and Simpson coaching the line, the Hurricanes finished the season ranked No. 4 in the nation in total defense (278.9 yards per game). They led the nation in several statistical categories including tackles for loss (10.46 per game), third down conversion percentage (25.27) and passing yards allowed (135.6 per game).

That, Diaz said, made a difference.

“I just felt that with me getting more involved defensively that having someone like [former defensive line coach] Todd Stroud help me with a lot of the administrative pulls on my time would be really valuable. Todd is outstanding at that, whether it’s compliance, the trainer, the weight room,” Diaz said. “And then, you think about restructuring the defensive line … it just felt like Jess Simpson, his experience coming from the NFL and the way we worked together when he was here in ’18 and what he did for our front that year … his attention to detail, the level of training for those guys really had a lot to do with our best year defensively in the five years since I’ve been here at Miami.

“When you already have that type of experience, having been in the foxhole with somebody and you know what they’re about, who they are as a person and how the teach, it made it very easy to bring Jess back.”

Now, it’s time for the Hurricanes to try and replicate that success.

Simpson is confident it can be done and the work to get there has already begun.

“Knowing what the standard is, knowing the excellence that’s happened here before, knowing the things we’re capable of doing and what we have to do, we’re in this thing together,” Simpson said. “We have to get there. There’s no other option but getting this done. Having that ‘U’ on the side of your helmet and being a part of something that’s bigger than you and has been special for so long, I just treat it as a great opportunity.”