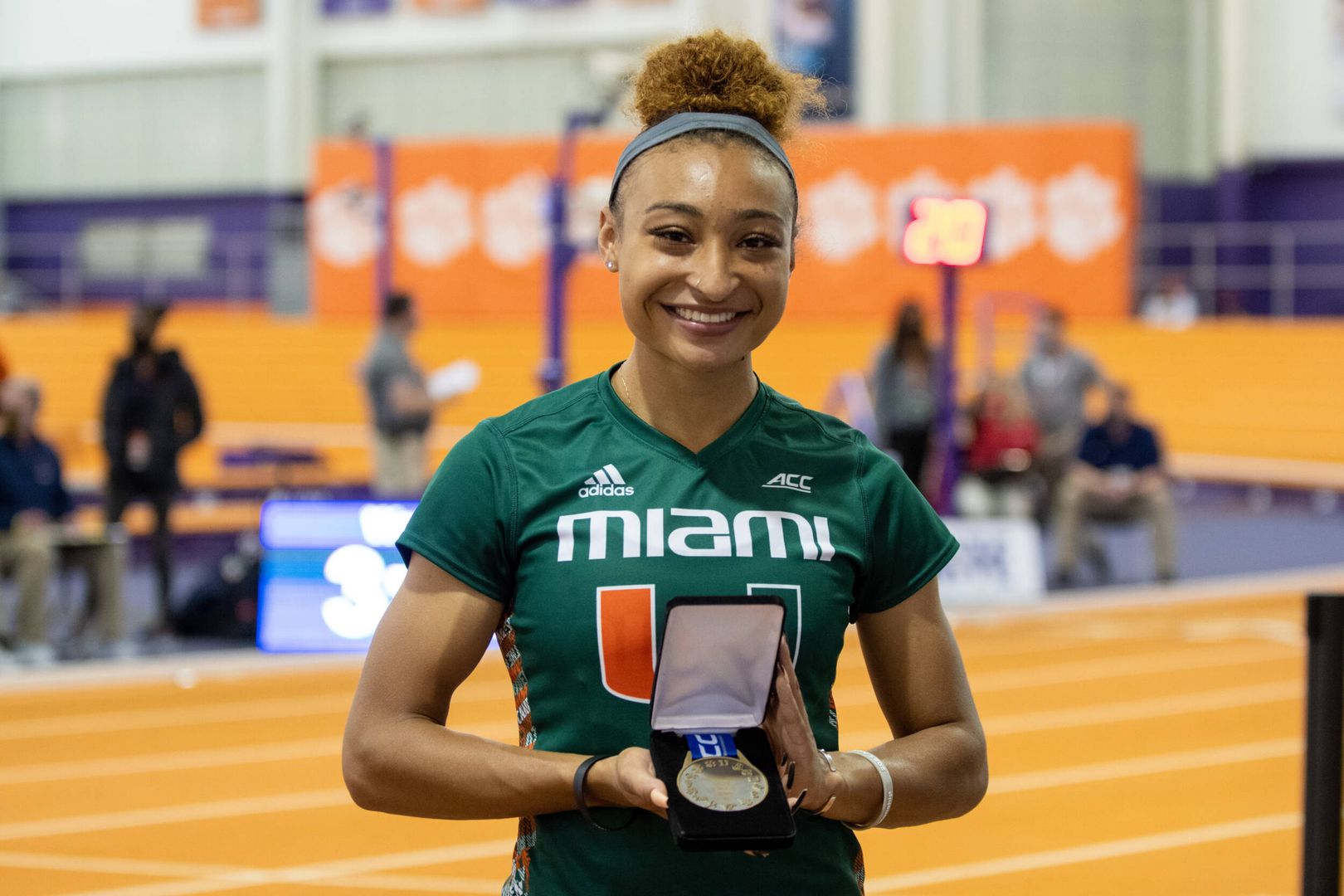 CLEMSON, S.C. – Lauryn Harris made her debut in the long jump for the Canes and earned a bronze medal in her first ACC Championship event.

The sophomore transfer earned six teams points for the Canes after recording a personal best mark of 6.18m. Harris held the top mark after flight one and entered the finals with the third-best mark at 6.07m. It took just one jump in the finals to earn the bronze medal.

Meanwhile on the track, five Miami women advanced to a final on the closing day of competition.

“I was really excited about the performances today and I thought we did some really good things,” director of track and field Amy Deem said. “We went and needed to advance and for the most part, we did what we needed to do.”

Graduate student Alfreda Steele tied a personal best time in the 60m dash and the fastest qualifying time at 7.25 seconds. Sophomore Jacious Sears also qualified for the finals with her fourth-place finish at 7.40 seconds.

Senior Tiara McMinn also had the top qualifying time in the 60m hurdles, posting a season-best time of 8.02 seconds, which ranks as the fastest time posted in the ACC this season. Harris qualified for the finals with her personal-best time of 8.28 seconds.

“I’m really excited for Lauryn and a big PB in the hurdles and in the middle of the long jump and getting third place,” Deem said.

Freshman Moriah Oliveira ran the third-fastest time in the women’s 400m dash at 54.52 seconds, making her way to her first ever ACC Championship finals.

On the men’s side, sophomore Russell Robinson finished seventh in the men’s long jump with his season-best mark of 7.35m.

Five men competed in the 400m dash with Khamal Stewart-Baynes finishing with the fastest time at 47.70 to finish 12th. Freshmen Ramy Berberena and Solomon Strader finished with top-20 times at 47.75 and 48.01, respectively. Ryler Gould and Jalen Gordon closed out the times at 49.16 and 49.39.

“I’m excited for the whole day tomorrow. We have two girls in the 60, two girls in the hurdles, two in the 800 and I think we can run a good 4×400,” Deem said. “I think our men’s 4×4 are really hungry after today and I’m looking forward to seeing them step up and put everything they’ve got into it.”