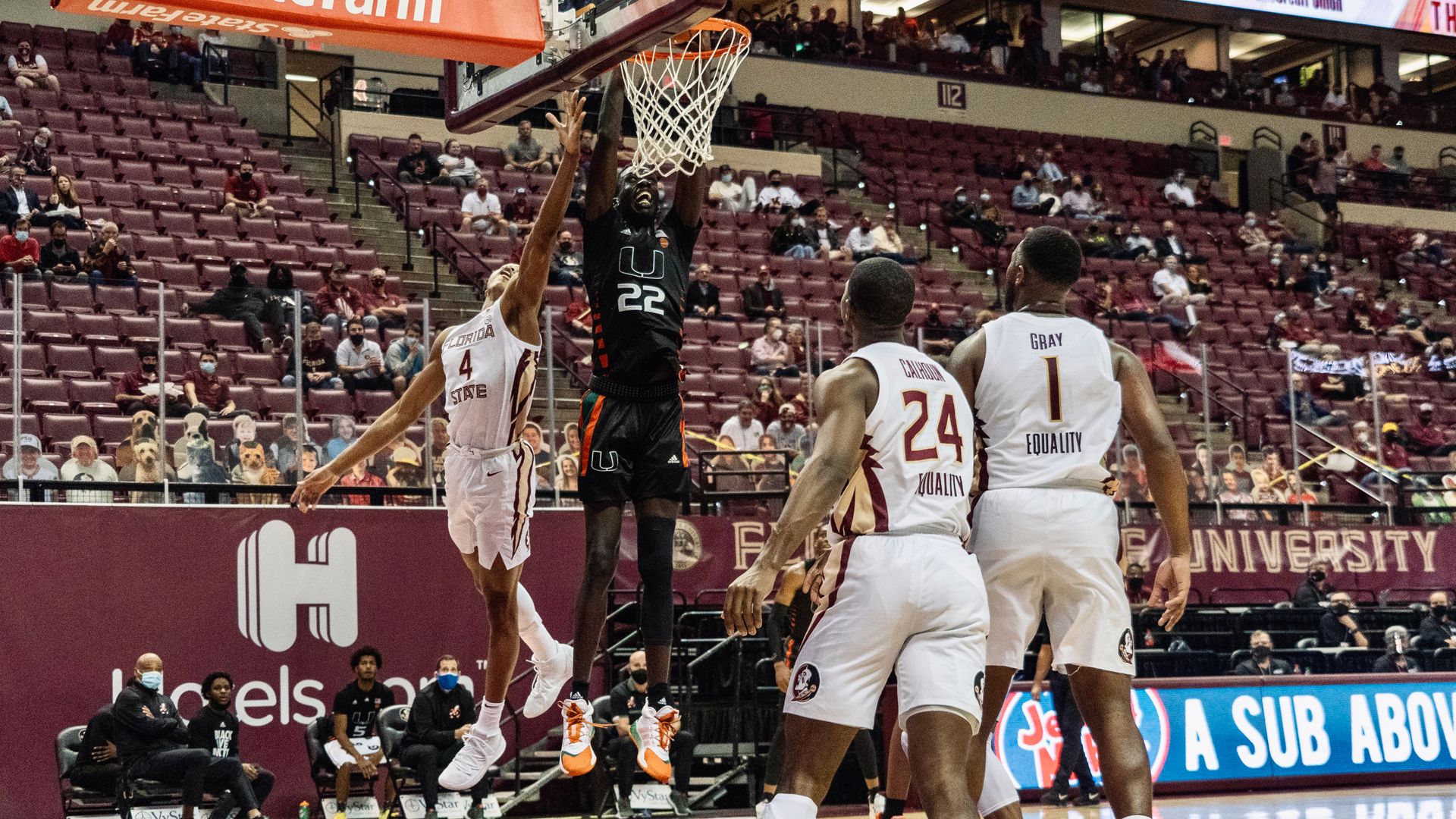 MBB Falls at No. 16 Florida State

Sophomore guard Isaiah Wong scored a game-high 21 points for the Hurricanes, who cut a 22-point first-half deficit down to nine after the break before the Seminoles pulled away at the Donald L. Tucker Civic Center.

“Florida State is really an outstanding team. They’re very deep, very talented. We were not able to stay with them in the first half until the very closing minutes,” Miami head coach Jim Larrañaga said. “…I thought we did a really good job to start the second half. We got it within [nine] and then we had a couple of easy shots that didn’t go down for us and they ran off [12] straight points … and we were never able to recover from that.”

Wong, who made all six of his free throws and went 3-of-7 from deep, added three assists and a career-high-tying three steals to his 21-point total.

Redshirt senior guard Kameron McGusty scored 13 points on 5-of-11 shooting, including a 3-of-6 mark from 3-point range, and set a season best with three steals. Sophomore forward Anthony Walker also logged 13 points and finished with a career-high 36 minutes of action.

The Hurricanes now play a second consecutive road game, as they head to Winston-Salem, N.C., to square off with Wake Forest Saturday at 2 p.m., live on ACC Network from Lawrence Joel Veterans Memorial Coliseum.

MIAMI HURRICANES POSTGAME NOTES
– The Hurricanes moved to 36-50 all-time against Florida State, including 8-33 on the road and 8-12 in Larrañaga’s tenure.
– Larrañaga, who entered the game with the 11th-most victories of any active Division I coach, is now 666-456 in 37 years as a head coach, including 196-122 in 10 seasons at Miami.
– For the first time this season, Miami used a starting lineup of McGusty, Walker, Wong, sophomore guard Harlond Beverly and redshirt senior center Nysier Brooks, the team’s seventh opening five of the year.
– Miami once again played without three of its four returning starters: senior guard Chris Lykes (left ankle), redshirt senior center Rodney Miller Jr. (right knee, season) and redshirt senior forward Sam Waardenburg (left foot, season).
– In addition, the Hurricanes were without freshman guard Earl Timberlake (left shoulder) and senior guard Elijah Olaniyi (left shoulder), with the former out indefinitely and the latter day-to-day.
– Brooks, one of two Hurricanes to start all 15 games this year, committed three fouls in the first 10:46 of the game.
– Wednesday marked the first time this season the Hurricanes have played in front of a crowd of over 250 fans, as 2,825 attended the game.
– Miami finished with 10 steals, its fourth time reaching double figures this season, including the second in a row.
– This is the third straight game the Hurricanes’ opponent has shot over 50 percent from the floor after none of the first 12 did so.
– Gray and Osborne are the first teammates to tally double-doubles against the Hurricanes since Notre Dame’s Prentiss Hubb and John Mooney did so on 2/23/20.
– The Hurricanes’ worst rebounding margin previously minus-14, set 12/16/20 against Pittsburgh (43-29).
– Miami committed seven turnovers in the first 6:05, all in a span of 3:19, but then gave the ball away just once the rest of the half and only six times total in the remainder of the game.
– After scoring 11 points in the game’s first 17:21 of action, the Hurricanes registered 12 points in the next 1:46.
– After Miami pulled within nine in the second half, Florida State extended its lead as high as 24 down the stretch.
– Walker scored in double figures for the sixth time, including the fifth this season.
– Entering the game 2-of-25 from 3-point range this season and having never made multiple 3-pointers in a game in his career, Walker hit his first two shots from beyond the arc and finished 2-of-3 against the Seminoles.
– Wong recorded his 23rd double-digit point total and 10th 20-point showing, including his 13th and seventh, respectively, in 2020-21.
– Wong surpassed 500 points and reached 150 free-throw attempts as a collegian.
– McGusty scored double digits for the 54th time, including the fifth this year.
– Senior guard Willie Herenton set career highs in minutes (17), rebounds (three) and field-goal attempts (six), eclipsing his prior top marks of 10, three and two, respectively, all set 1/25/20 at North Carolina.
– The 17 minutes are the most by a Miami non-scholarship walk-on since the Hurricanes joined the ACC in 2004-05, passing the mark of 10 Herenton set against the Tar Heels last year.
– Herenton, who scored three points, also set career bests in 3-point attempts (three) and free-throw attempts (three), besting his prior top marks of two in each, the former of which he has done multiple times and the latter of which came 11/22/18 against La Salle in Fullerton, Calif.
– Brooks surpassed 450 rebounds in his career.
– Sophomore guard Filippos Gkogkos made his season debut for the Hurricanes, playing the final 2:17.
– Redshirt junior forward Deng Gak played a career-high 25 minutes and tied a season best with two blocks.