“We played tough and it was a heck of an environment,” head coach Katie Meier said. “I could tell before the game that [the team] was really dialed in. I thought we were very focused for 40 minutes.”

Senior Kelsey Marshall led the Canes in scoring, pouring in 19 points on 6-of-13 shooting, while junior Naomi Mbandu hauled in a career-high 11 rebounds to pace the Canes on the boards. Mbandu added a career-best 17 points to her stat line for her first-career double-double. 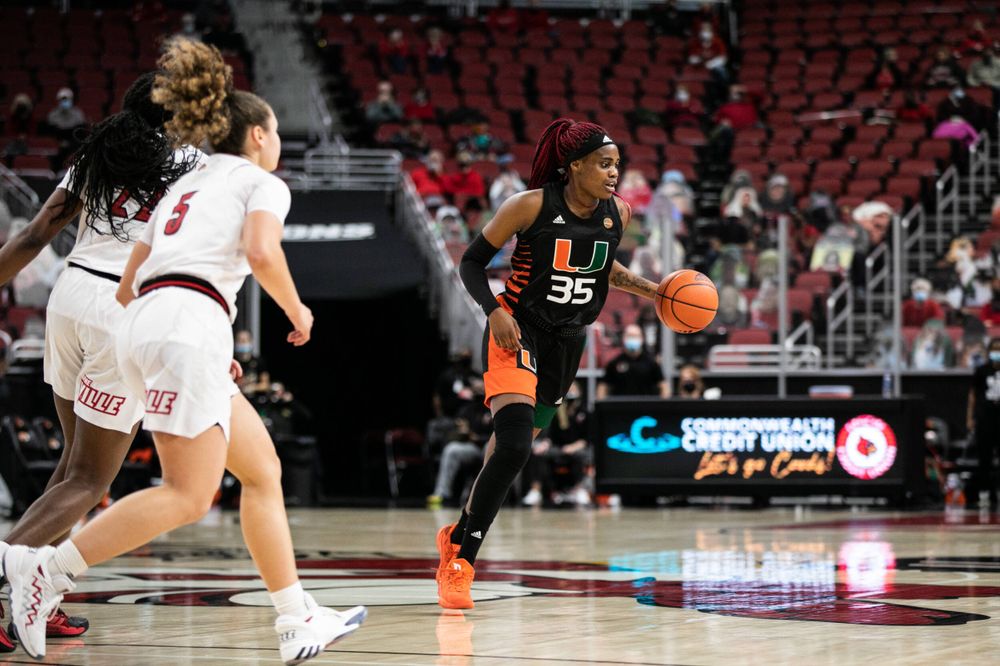 “Naomi is a great mismatch for us,” Meier said. “It’s really awesome to be able to score against Louisville because they are a great defensive team. You need to have a unique player like Naomi to do that.”

Senior guard Endia Banks rounded out the double-digit trio for Miami, totaling 13 points, seven rebounds and four assists in the game. Banks has now scored in double figures in six of the last seven games.

As a team, Miami shot a season-best 47.5 percent (28-of-59) from the field, marking the fourth time this year the Canes have shot over 45 percent. The Canes knocked down eight 3-pointers in the contest, with Marshall accounting for four of them.

Eight different Canes tallied a basket in the first half of action, led by Marshall, who tallied eight of her 19 points in the first 20 minutes. Four Canes shot better than 50 percent before the break, including a perfect 2-of-2 effort from sophomore Sydnee Roby.

Louisville used a 50 percent shooting effort in the first quarter to take a 22-13 lead at the end of the first quarter, but Miami responded with an 8-0 run in the second to make it a one-point game. The Cardinals opened the third quarter on a 9-3 run to stretch their lead to 14 points, but the Canes battled back behind a seven-point quarter from Banks. Miami knocked down 8-of-15 shots in the third to trail, 65-56, with 10 minutes remaining.

The Canes continued to fight in the fourth, outscoring the Cardinals, 20-14, to pull to within three. Down six with 13 seconds to play, Marshall knocked down her fourth 3-pointer of the game to make it a one-possession game.

Needing the ball back, Miami fouled and sent Louisville’s Dana Evans to the line and the reigning ACC Player of the Year knocked down a pair to stretch the lead back to five. Senior Taylor Mason hauled in an offensive rebound at the other end and dumped in the putback as time expired to make the final score 79-76.