This is the 14th consecutive ranking release in which Perez-Somarriba holds a top-three spot, dating back to March 5, 2019.

A redshirt senior from Madrid, Perez-Somarriba won the 2019 NCAA singles title and remains the reigning champion after the 2020 campaign was cut short due to the COVID-19 pandemic. She has claimed each of the last two ACC Player of the Year awards and owns a career singles record of 141-23, good for the most wins in school history.

Two other Hurricanes also earned a spot in the year-opening ITA rankings, with junior Daevenia Achong placing No. 87 and sophomore Selma Cadar coming in at No. 102. 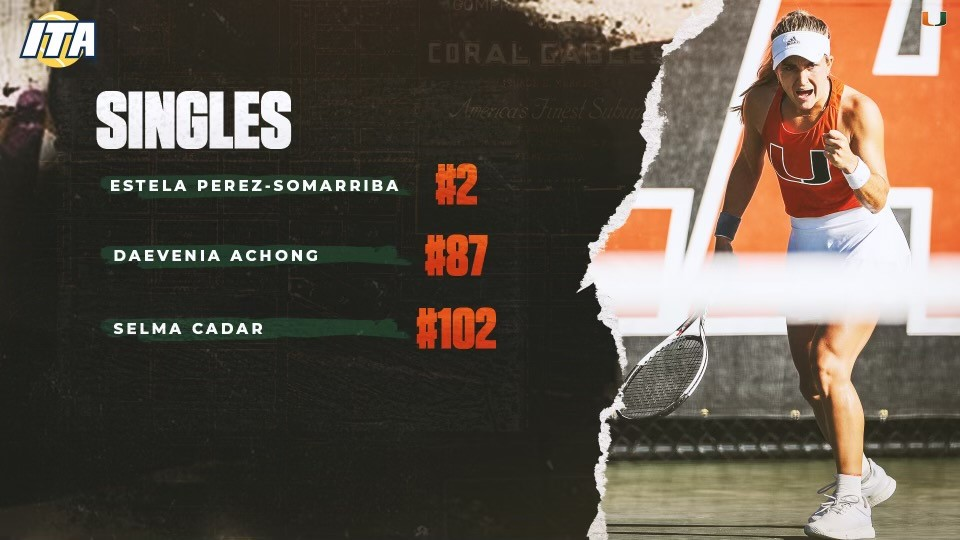 This is the first time Achong’s sports a singles ranking entering a spring season, but she did peak at No. 72 on the list last year. A native of Geleen, Netherlands, Achong is a two-time ACC Player of the Week who owns a 38-20 career singles record with eight victories over ranked opponents.

The No. 102 ranking for Cadar matches the position she held to end the abbreviated 2020 campaign. The Bucharest, Romania, native tallied a 14-11 singles mark in her opening collegiate season, including four triumphs versus ranked foes and a 6-2 ledger in dual matches.

Miami is one of 19 teams in the country with at least three players in the preseason ITA rankings. Seven of those 19 programs are in the ACC, while no other league has even five schools with a trio of ranked players.

The complete preseason ITA top 125 can be found HERE. Team rankings will be released Thursday.