Canes Take Momentum on the Road

CORAL GABLES, Fla. – The Miami women’s basketball team hits the road for just the second time this season on Thursday to play Wake Forest, before heading down the road to Chapel Hill, N.C., to take on the North Carolina Tar Heels.

The Canes carry momentum with them to The Tar Heel State after defeating Clemson, 80-71, to start the new year. Not only did Miami gain confidence from the victory, but also several key players found their rhythm once more, among them being Kelsey Marshall and Sydnee Roby.

“We really challenged some players this week, including Sydnee Roby,” head coach Katie Meier said. “Sydnee put in the work and, when she got her opportunity, she was amazing.”

Meier emphasized how proud she was of the work that the team put in following the loss to Notre Dame, a game that the team feels it should have come away with the victory.

“The entire team stepped into it, showed up and worked really hard,” Meier said. “Before [Clemson], I told them I was already proud and then they went out and chose courage over comfort during the game. We played bravely and did what we needed to do.”

One of the especially brave players was Marshall who, after a quiet performance against Notre Dame, came out and poured in 19 points against the Tigers. Even more impressive is that the senior stayed resilient when the first 20 minutes didn’t go her way, tallying 14 of her 19 points in the second half.

The Miami guards continue to dominate this season on both the offensive and defensive side of the ball.

“Our guards have been playing really hard minutes,” Meier said. “Endia [Banks] and Taylor [Mason] have both been playing point guard and getting 14 rebounds between them. They are playing so hard right now.”

Banks has led the Canes in scoring the last two games and looks to continue her double-digit streak on Thursday against Wake Forest.

“I want to go out there and play hard and give it my all for my teammates so they can have somebody to follow and lead them to wins,” Banks said.

Ultimately, Meier asked her team to just fall back in love with the game of basketball. And through hard work and dedication after the Notre Dame loss, the team did. 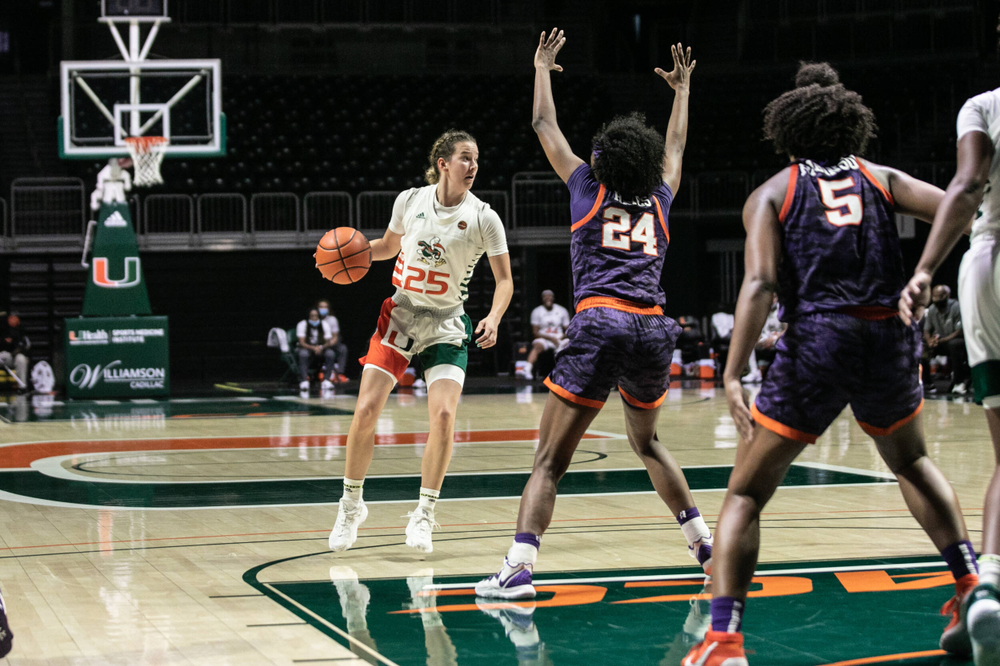 Miami will be put to the test on Thursday when it meets the Wake Forest Demon Deacons for the first time this season. The Demond Deacons have not played a game since Dec. 20 due to postponements and cancellations, while the Canes are fresh off a victory over Clemson.

The Canes hold the all-time series advantage coming out on top in 14 of the 23 meetings between the programs. Miami won both games in the series in 2019-20 and has won eight of the last 10 meetings.

Thursday’s game will air on ACC Network with Pam Ward and LaChina Robinson on the call. Fans can also listen to the game on WVUM 90.5.