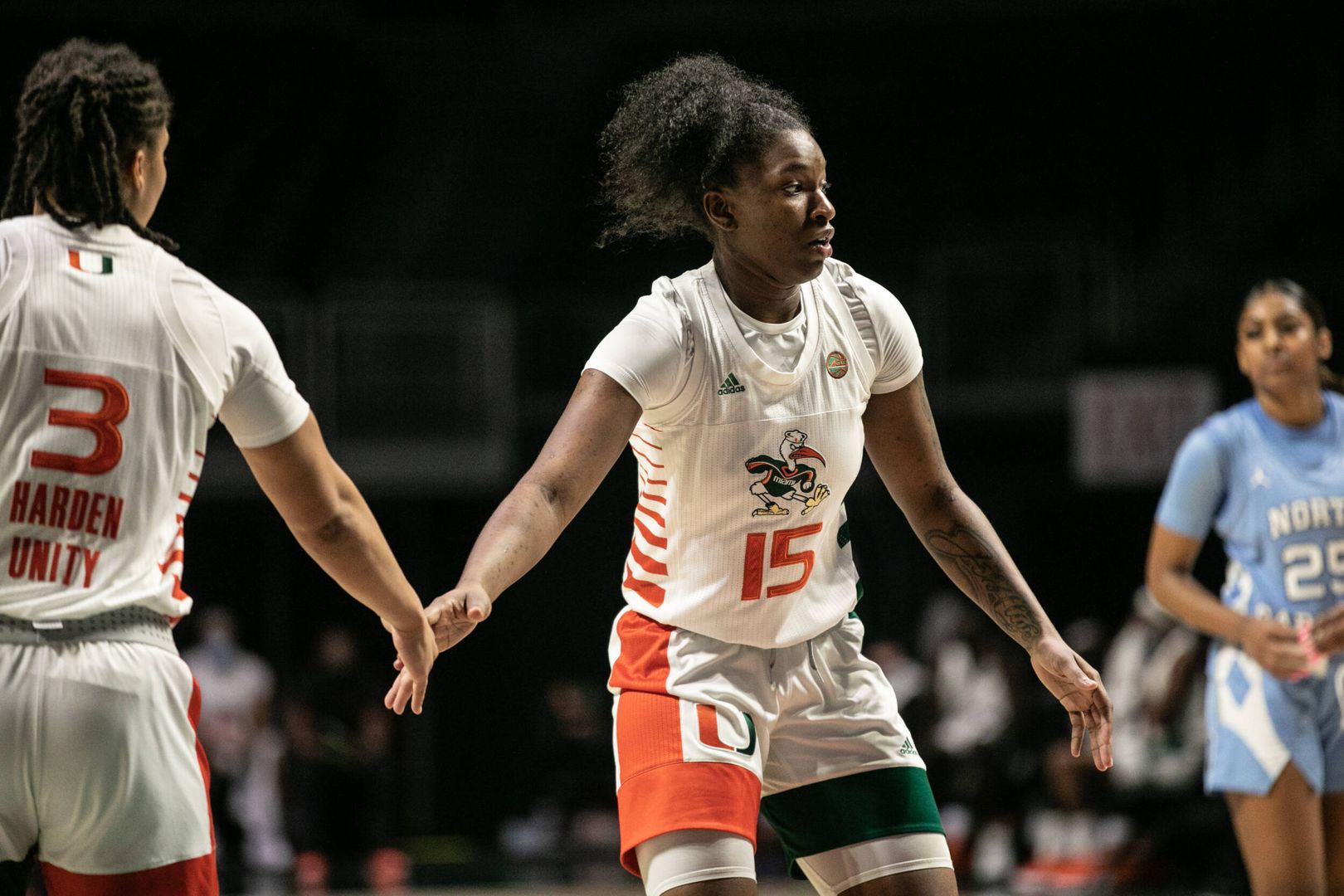 Those were the words spoken by head coach Katie Meier just moments after a 67-63 victory over conference foe North Carolina on Monday.

Despite shooting just 31.8 percent in the contest, Miami was tough on the glass and disruptive in the open court to contain a high-scoring North Carolina offense. The Canes forced 15 turnovers in the contest, turning defense into offense with 17 points off turnovers.

With posts Sydnee Roby and Brianna Jackson in foul trouble early, Meier had to put a smaller lineup on the court, but the guards and small forwards showed their fight on the boards.

“When we went small, Destiny [Harden] was a hero,” Meier said. “But then you have Endia Banks rebounding her tail off and you have Jamir Huston who was also a hero tonight. We played hard and gave it our best effort.”

Harden has been a revelation for the Canes this season, averaging 13.2 points and 6.8 rebounds per game, good for second and first on the team, respectively. The forward tallied her second double-double of the season on Monday (20 points, 13 rebounds) and is one of seven ACC players to post two-plus double-doubles this season.

“Destiny is a special player,” Meier said. “I love her shot chart and I love what she can do. I thought she was heroic on the glass and had huge offensive rebounds when we were on the ropes.”

Miami posted 14 offensive rebounds in the contest, including five from Harden, and tallied 13 second-chance points.

“As a player, I think getting offensive rebounds is fun,” Harden said. “Having a second-chance opportunity to score the ball is even more fun. I think getting those rebounds and putting points up is going to help us win more games.”

The Canes next opportunity comes on Sunday when they travel to Raleigh for their first road game of the season against NC State. The Canes were originally scheduled to play Louisville, but positive tests and subsequent contact tracing and quarantining within the Cardinals’ program forced a change in plans.

“We’ve done a lot of prepping for games that have unfortunately got moved, so we are just focusing on Miami as much as we possibly can,” Meier said. “NC State is a very complicated team that is very difficult to defend and score against. As a staff, we are going to focus on the things that we’ve be doing well and translate that to Sunday’s game.”

The reigning ACC Champions, NC State returns center Elissa Cunane, who paces the team in both scoring (15.6) and rebounding (8.0). The Wolfpack is the fourth-ranked team in the nation according to the Associated Press and enters Sunday’s game at 7-0.

This will be the 24th all-time meeting between the Canes and the Wolfpack, with NC State holding the 12-11 edge in the series. It will take a gritty effort from Miami to take down one of two remaining undefeated ACC teams.

“We’re going to go in focused and prepared to win,” Harden said. “We need to play strong, play physical and stay focused throughout the whole game.”