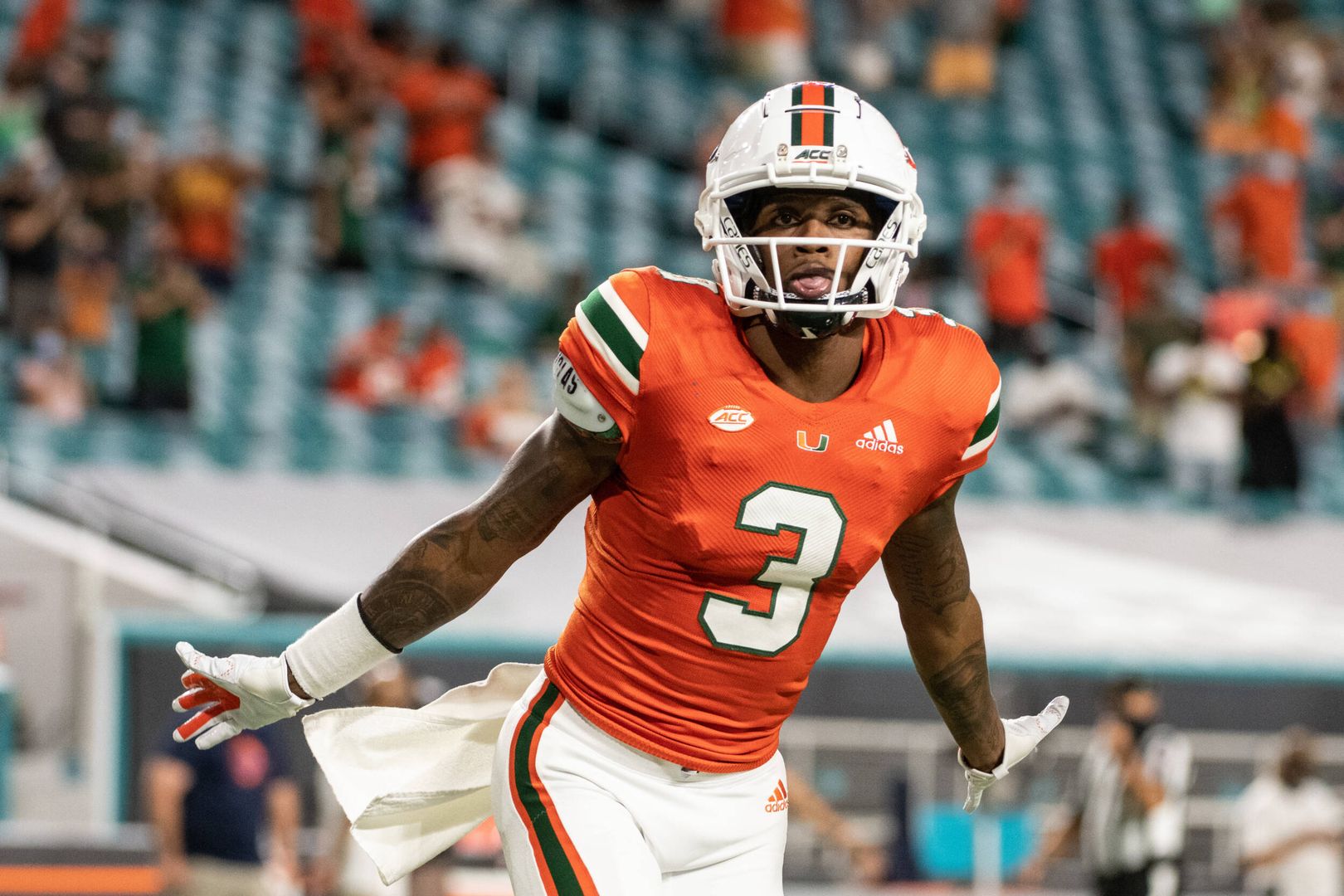 CORAL GABLES, Fla. – When her son became a Hurricane, Timico Slaughter made a promise.

No matter the challenges, no matter how tough it might be, she’d watch every single moment of every single game, even if she couldn’t be there in person.

In that sense, last Friday night was no different than any other game day. Slaughter was tuned in from start to finish, cheering from her Fort Lauderdale home as Miami rallied from a 10-point, fourth-quarter deficit to pick up a crucial conference win over NC State.

But it was what happened in the game’s final minutes that left Slaughter at a loss.

When her son was overtaken by emotion minutes after scoring the game-winning touchdown on a 54-yard catch-and-run play, Slaughter broke down, too.

There was no more fitting birthday gift Mike Harley could have given her, not after all the twists and turns his football journey at Miami have taken. 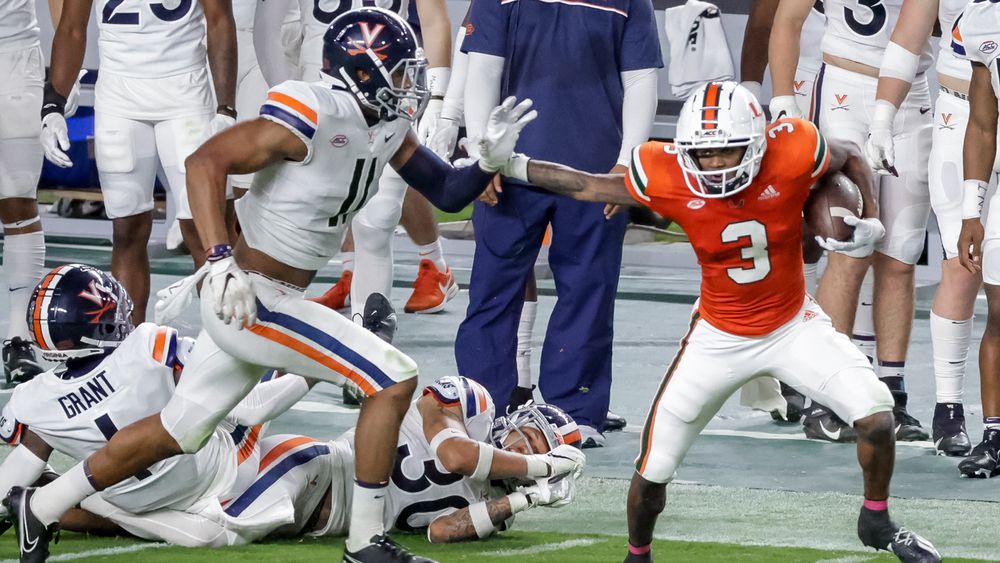 “Me and his father just cried because no one, no one but the good Lord upstairs, knows deeply how much this all means to Mike,” Slaughter said. “After the Louisville game when he dropped four or five balls, he called me and said, ‘Oh, mom. I didn’t have a good game. This is it for me’ and I said, ‘Mike, don’t you come to me with that.’ …  We just keep instilling in him to remember you never know who’s watching. Remain humble through it all. No matter how hard things get, remain humble. We know the talent. The talent’s been there since he was a little boy, four years old, playing quarterback. It just takes time for some people to get where they need to get to…”

“Seeing him pouring down in tears, that was truly amazing,” she continued, getting emotional herself. “It was such a blessing. I told him that was the best gift I’d ever gotten in my 42 years of living. I will always remember that. It meant a lot.”

For Slaughter and Harley, Friday was one more memorable moment in what has been a pretty remarkable stretch of late for the senior receiver.

Two weeks earlier, against Virginia, Harley put together a career night, catching 10 passes for 170 yards – the most a Miami receiver has had against an ACC opponent since Allen Hurns had 173 yards against Pittsburgh in 2013.

That performance earned Harley ACC Receiver of the Week honors. He nearly matched those numbers against NC State, finishing with a game-high eight catches for a game-high 153 yards, with two touchdowns, including the game winner. 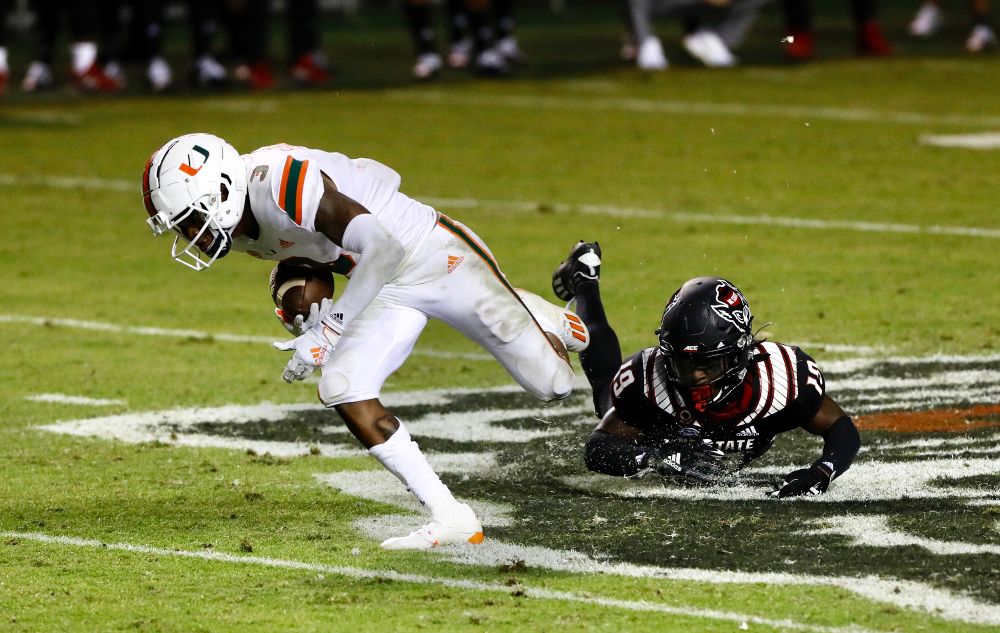 His efforts against the Wolfpack earned him another ACC Receiver of the Week distinction – and more importantly, has Harley feeling like after a tough start to his senior season, he has finally found his stride.

“Honestly, yes, it feels like I’m playing my best football right now,” said Harley, who enters Saturday’s game at Virginia Tech as Miami’s leading receiver with 35 catches for 497 yards and four touchdowns. “The craziest part about it is I feel like I’m having more fun. I’m really relaxed, really having fun and doing what I’ve loved to do since literally day one.”

That Harley is feeling as confident as he has in a long time comes as no surprise to those around him, including his teammates and coaches, who have seen his approach and mentality change in recent weeks.

The sight of Harley catching passes on his own long after practice is over has become a regular occurrence. And on Mondays, when the Hurricanes typically enjoy an off day, Harley is often reaching out to quarterback D’Eriq King to see when the two will get together for their weekly joint training-room visits and film study sessions.

Harley has been, undoubtedly, been doing the work to improve.

Now, he’s enjoying the process, too.

“Mike’s goofy. He’s a goofy dude. He’s funny, super funny. Always talking. But he keeps me in check and I keep him in check,” King said. “Every Monday, that’s our off day. I come up here and run and he’s texting me to see what time I’m coming in. … We both get a workout in and we watch tape, every single Monday since the season started. I think it’s starting to pay off, just to have that relationship. He knows what I’m seeing, I know what he’s seeing and we talk about what [offensive coordinator Rhett] Lashlee has put in the game plan. How we can attack this, how we can attack that. Everything works hand in hand.”

Said Lashlee, “I know since we’ve gotten here, Mike – along with that whole group – has worked really hard. … And when you know you’re working really hard and you’re doing everything you’re supposed to do to have the production you want and it’s not coming, that’s tough. I credit Mike and all those guys [Mark] Pope, [Dee] Wiggins, [Jeremiah] Payton, the young receivers, D’Eriq with just kind of pushing through all that and continuing to work, trusting the process and knowing that if you keep doing the right things over and over again, you have a chance to be successful. Success breeds confidence and you’ve seen that the last few weeks. … The tears, I can’t speak for Mike, but knowing myself, when you’re in those situations, sometimes it’s tears of relief that all that hard work is paying off and it wasn’t for nothing.”

"I have to attack this week with everything that I have and just take it like every game is my last game."

As well as Harley has played in recent weeks, though, the senior knows there is still plenty more to accomplish.

With a 6-1 record, Miami stands behind just Notre Dame and Clemson in the ACC standings. The Hurricanes are pushing for a potential berth in the conference championship game and Harley is determined to finish strong.

His family expects nothing less.

“Mike has battled. You can see it. He didn’t know what he was going to do, but we’ve tried to be steady. We’ve tried to lift him up and right now, he’s doing what he’s been doing his whole life: he’s catching the ball,’” said his father, Mike Harley Sr. “Right now, I’m so happy for him. ACC Receiver of the Week to weeks straight. That’s who he is. He’s just so happy and emotional because of the journey he went through. It’s in his heart to show everybody who he is.”