Wing Unit a Mix of Old and New

CORAL GABLES, Fla. – Expectations are high for the Miami wings this season.

The group is a mix of old and new, with returning Canes Destiny Harden and Moulayna Johnson Sidi Baba leading the way for newcomers Nyayongah Gony and Naomi Mbandu. The new Canes bring added height to the group, as both stand at 6-foot-2.

But what makes the wing unit so unique is the diversity in each of the player’s game.

The group is led by Harden, who started 15 of 25 games played in 2019-20. Throughout last season, the Canes looked to Harden to make big plays in big moments, hauling in a key rebound or knocking down a critical jumper.

The forward is looking to build on last year’s campaign and, according to head coach Katie Meier, is the player that made the most strides in her game during the offseason.

“She was hungry and was frustrated with not having anywhere to work out during the pandemic,” Meier said. “When the university made the facilities available in July, Destiny was the first person there. She’s really active and she’s playing really well.” 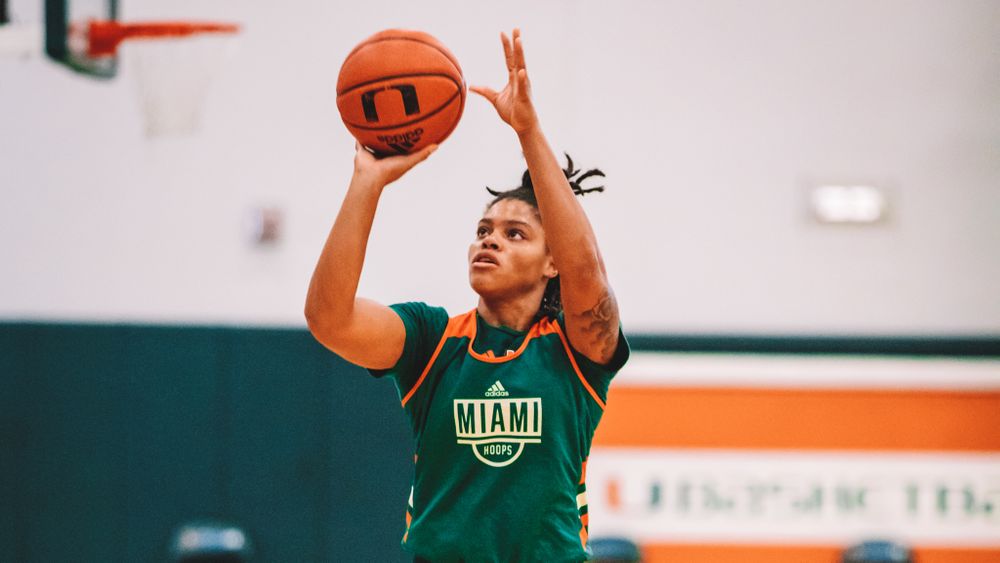 For Harden, the hard work was just part of the grind.

“I just wanted to keep on pushing myself knowing that I am a redshirt junior and that I can play a big role this year,” Harden said. “I know that I have to come in and be competitive and stay hungry throughout the entire season.”

Harden also emphasized how much teaching the younger players has helped her “grow her own game.”

One of those younger players is Gony, one of two freshmen on the 2020-21 Miami roster.

The No. 56 overall player in the class of 2020, Gony hit the ground running upon arriving in Coral Gables in July.

“She has caught on so quickly to our concepts and our plays,” associate head coach Octavia Blue said. “She’s a very cerebral player for a freshman. She’s so courageous, too. She’s not afraid to step up and take a shot when the shot clock is winding down and, even more than that, she’s hitting them.”

Gony is the definition of a position-less basketball player, able to play inside and along the perimeter. Her length and ability to shoot the basketball forces defenses to take notice, reminiscent of the Connecticut Sun’s DeWanna Bonner, according to Meier.

Mbandu joins Gony as the other new face among the wings, coming to Miami after two seasons at Gulf Coast State College, where she helped her team to the NJCAA Division I national championship in 2019.

The France native is ready to compete in one of the best basketball conferences in the country and will have no problem transitioning to the big stage, as she has represented France at numerous FIBA events in her basketball career.

Mbandu brings an international style of play to the Canes, providing elevated court vision to an athletic Miami team.

“The international players provide higher vision, passing and time per touch, which keeps us playing really fast,” Meier said. “I’ve really fallen in love with the mix of Americans and international talent.”

Sidi Baba makes up the other international part of the wing unit, adding to the versatility of the team. The sophomore appeared in 25 games for the Canes in 2019-20, making three starts and averaging 15.9 minutes per game.

Like Mbandu, Sidi Baba brings a high level of basketball IQ to the court, serving as an exceptional facilitator on the perimeter. Add in her ability to catch and shoot in the paint and on the wing, Sidi Baba will be a key factor in the Canes success this season.

Come opening day, the Miami wings will be ready to show up and show out.

“We have been working hard over the summer and we brought in a couple more pieces, so I think we are going to be very competitive,” Harden said.

Harden and the rest of the wing unit will take the court in just a few short weeks to tipoff the 2020-21 season.