There are moments that Andy Kershaw can only laugh off. Expired I-20s resulting in brief airport detainments, language barriers at international meets where neither instructor nor student-athlete can get the translation of a word just right.

But make no mistake about it – the value of Miami’s brand on an international level has paid dividends for the swimming coach, now in his eighth year at the helm.

“It has that hit right off the bat when people hear Miami, they’re like, ‘Yeah, I’m interested.’ We definitely have that advantage,” he said. “Being such a global city, such an amazing city, so many things to offer, and then you throw on top of that a tremendous university with a great academic reputation, and the brand of The U…it’s a great combination to attract people.”

Miami’s roster is as diverse as ever this fall, and Kershaw said the global appeal of the Hurricanes has played a key role in helping guide the program’s trajectory.

Two of Miami’s four captains for the swimming & diving program hail from outside of the United States – diver Millie Haffety, who arrived in Miami from the United Kingdom, and swimmer Carmen San Nicolas, who came from Spain.

Three of the school’s record holders are swimmers recruited by Kershaw who hail from outside of the United States – including France native Manon Viguier, who graduated this past spring and set the Miami record in the 100-yard freestyle in 2018.

One of Kershaw’s favorite memories was driving around with Viguier before a day of competition at a French national swimming meet.

“Everyone is speaking French, of course, and it’s a language I had taken as a student, so I knew just enough to get around,” Kershaw said. “Driving down the street with her, I was asking her, ‘What does this word mean?’ or ‘What does that word mean?’ and she would get the translation wrong.

While he laughs about individual memories, Kershaw said the overarching importance of recruiting the right people to the program has become paramount – and not just on an international level. 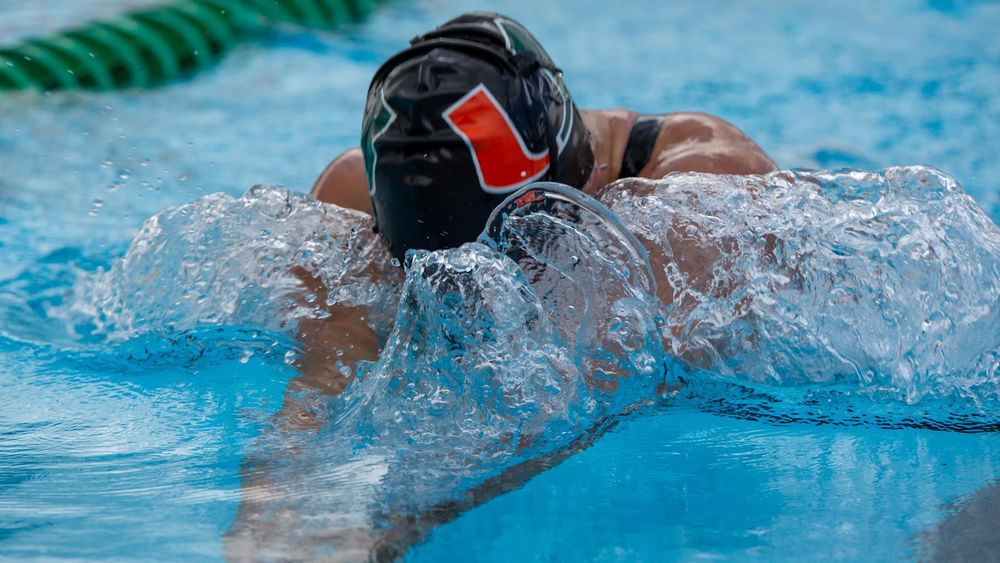 “Another piece I have had to figure out is making sure we’re attracting people that want to be great students, great swimmers and obviously great people, and not just people who want to be in Miami,” Kershaw said. “That has been a bit of a learning curve and a process, but now I think we’ve got that part down.”

Now in her third season as assistant swimming coach, Tanja Kyllainen said the international appeal of The U – and the development of the program’s swimmers at both an NCAA and international level – played a big role in her decision to join Kershaw on the coaching staff.

“I think that really speaks to the growth of our program,” she said. “Getting girls to come in that have goals outside of the short course season, and being able to share that with them. From an experience standpoint, a lot of our swimmers ask, ‘Should I go to European championships? Does it fit into our schedule?’ Andy and I are both big proponents of, if you have the opportunity to represent your country, it’s one of the greatest honors you can possibly earn.”

Similarly, Kershaw said a key factor in the hiring of Kyllainen was based on her experience as a Finnish Olympian, NCAA All-American and ACC champion.

“I truly believe [Kyllainen] is one of the best young coaches in the industry,” Kershaw said. “The fact that she’s here speaks volumes to the attraction of Miami to people who want to be international. That’s her. She grew up with it as a reference. I grew up landlocked in Ohio. Whereas I’ve come to learn it, she’s always known it, and that’s part of her family, it’s part of who she is.”

On a more personal level, Kershaw has lost track of the amount of unexpected interactions during his time on the recruiting trail.

“The places that I have been where people have thrown up The U to me, whether that’s at a meet, at an airport, running down the street... it’s mindboggling how global the brand is."

And that’s not to say that Kershaw and Kyllainen have shifted focus entirely. Recognizing the important balance in recruiting has been key, and just last year, four of Miami’s top five point-getters in the lanes were native to the United States.

But just this year, freshmen Korlan Amirkhanova (Almaty, Kazakhstan) and Savannah Barr (Sarasota, Fla.) will call themselves teammates for the first time – and the value of that mix is not lost on Kershaw.

For Kershaw, playing a role in help shaping the lives of the women in the program is just as important as the success at ACC Championships, NCAA Championships and international competition. Watching the members of his team – all from countless different backgrounds, countries and experiences – interact and become lifelong friends outside of the lanes has evolved into a defining job responsibility.

“It’s such a pleasure to watch unfold,” he said. “I’m so lucky to be in a position where I can sit back and watch it happen. Obviously we play a role in facilitating it, but there are moments when there are conversations going on amongst our team where it’s super special to sit back and watch.

“It’s exciting to know that we’ve got it going in a direction where people understand that if you’re coming here, it’s not just to be in Miami – it’s do the whole package. That’s the best part of it all.”