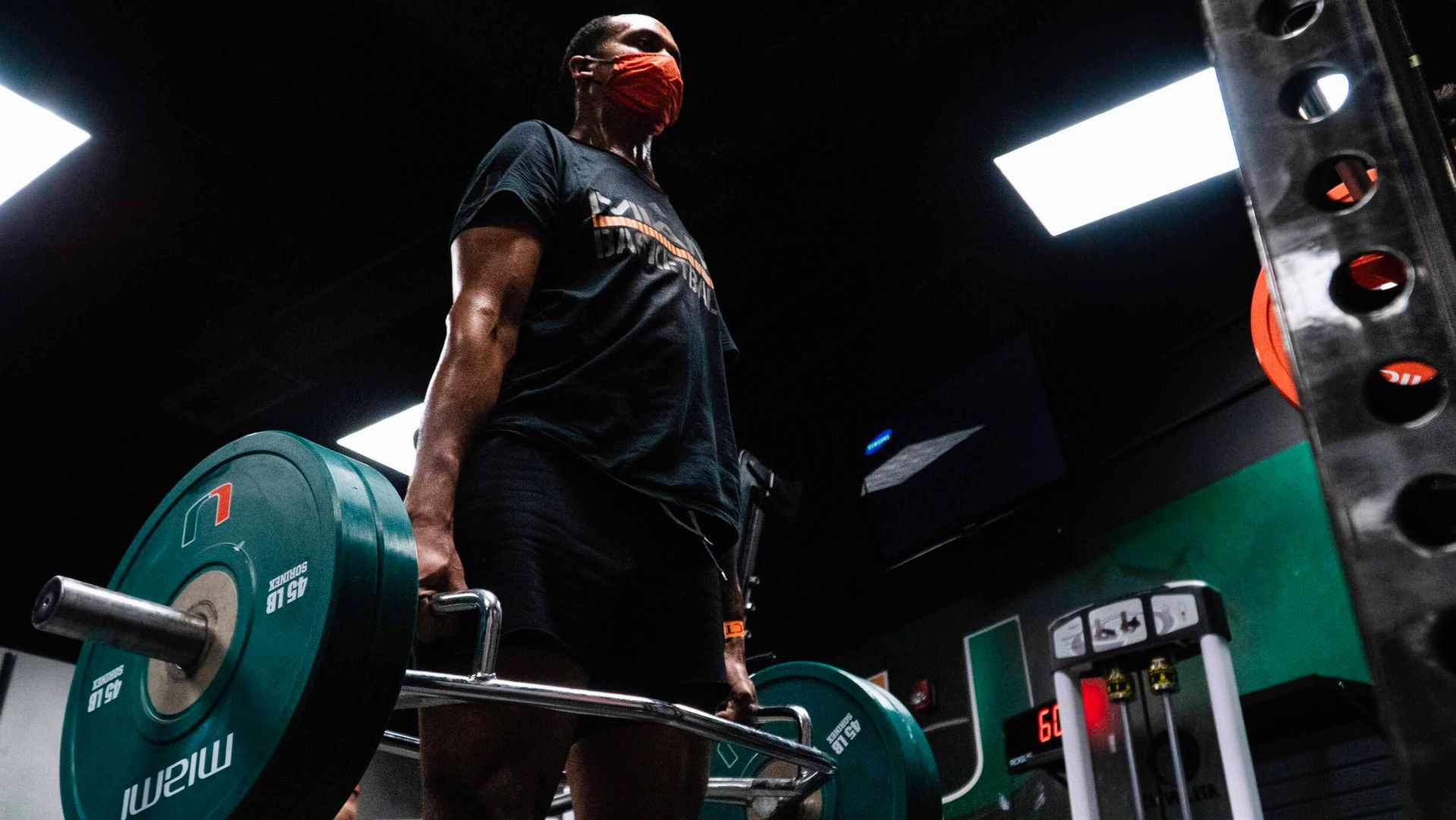 Working Their Way Back

But each offseason, college athletic programs across the country have a similar plan in how they approach their strength and conditioning.

The COVID-19 pandemic altered everything. From spring work to summer work to fall work, it has all been different.

“Hands down, this has been one of the more unique coaching experiences of my career,” Miami men’s basketball strength & conditioning coach Phil Baier said.

For months, Baier could not work directly with his players, who were spread across the world during quarantine.

Some had grassy patches to go for a run. Some had to take to the streets to run. Some preferred, initially, to stay in their homes.

Baier, in his first full offseason with the Hurricanes after joining the staff in September 2019, sent video examples of at-home workouts to his players. A common theme for those without the ability to use actual weights was loading up a backpack.

Everyone is looking for different ways to get their exercise and lift in right now.

Courtesy of our strength coach, @CoachPhil_Miami, in just two minutes he’ll give you five at-home exercises to help you build some strength while we’re social distancing. pic.twitter.com/C4E0EbEfio

All of the workouts, though, were at the players’ discretion.

“I tried to make sure I got in contact with everybody in one way, shape or form like twice a week,” Baier said. “It was all voluntary, just kind of checking in, making sure they’re healthy, making sure they’re eating. If they wanted to talk about lifting, great. If they didn’t, I didn’t make a huge stress about it because it was an extremely strange time.”

The Hurricanes returned to campus in waves, beginning in early July. Even then, the offseason plan remained irregular.

With different players handling the quarantine in different ways—and all doing so without Baier’s supervision—the normal routine simply was not possible.

“Having to treat everyone when they came back the same way was very different for me. I’m used to having a little more of an individualized plan for each guy, or at least groups of them … whereas here, from a safety perspective, that wouldn’t have been a good approach,” Baier explained. “We had to make sure these guys [were able to] move, relearned how to kind of get reacclimated to the weight room, reacclimated to running for some of them, reacclimated to court work … So, we really treated everybody almost as if they were freshmen right when they got back.” 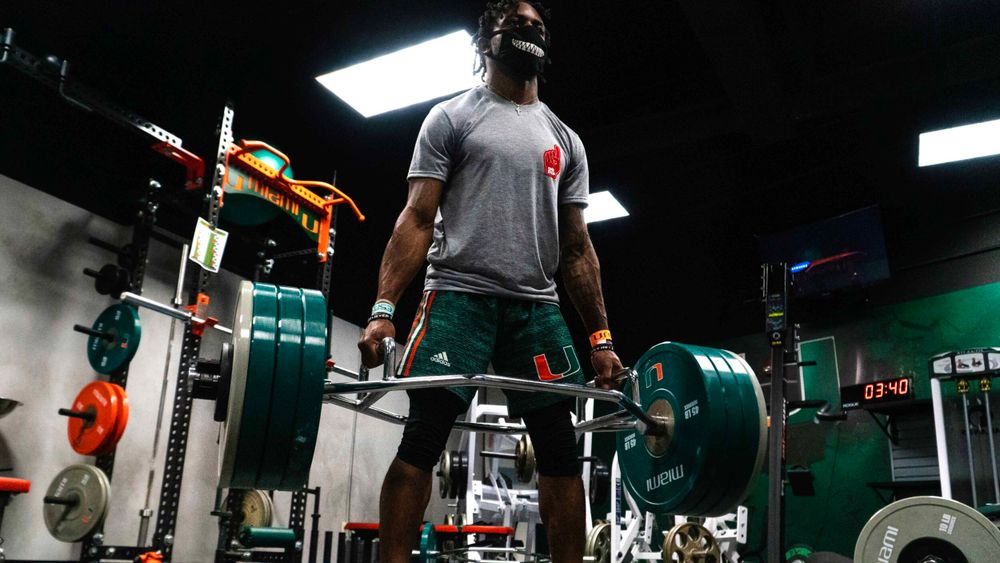 Another oddity for Baier was the staggered arrival of Miami’s players, meaning that the freshman-like approach took place at different times for different players.

However, to players such as Anthony Walker, just being back on campus in a more familiar situation was positive, even if it included some simple workouts.

The route took longer than usual, but the team did eventually get to a point where it could do some more common activities. 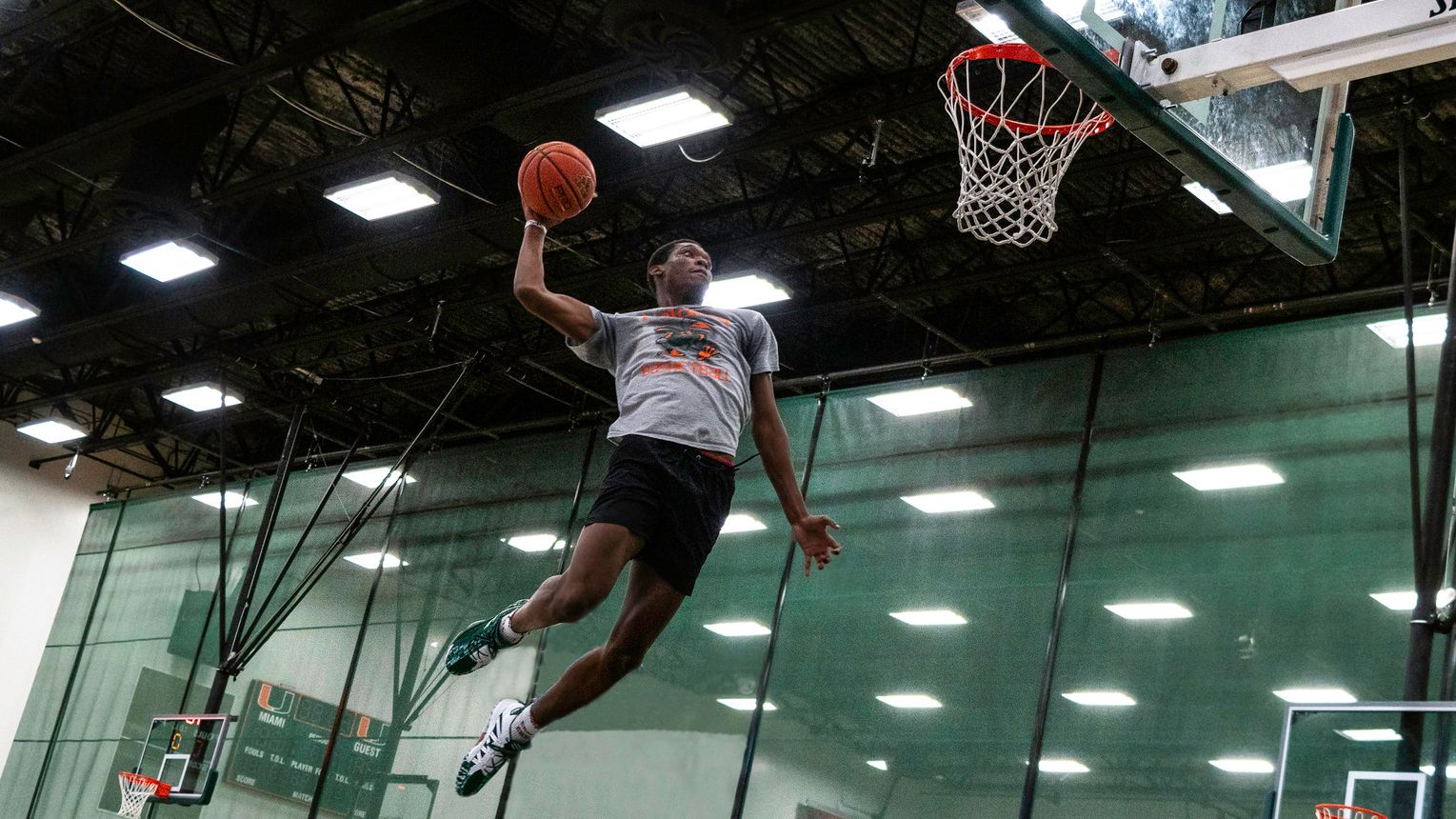 That return has also come progressively over the past few months.

“It’s a step-by-step process,” Miami head coach Jim Larrañaga said. “We ran the mile on the track, but we didn’t do it the first day. It took us, I think, three weeks to get to that part. And then for the next three weeks, we were on the track running twice a week. And then once we got them in decent shape, then we took the conditioning to the court and [in mid-September], for the first time, we scrimmaged. It was the first time since March we did anything full-court. We’re just getting ourselves into the kind of shape that you feel is being game ready.”

Baier had his players “keep doing the basics viciously well for about three weeks” before they continued that step-by-step process Larrañaga mentioned. The ramp-up included additional weights, as well as more sprinting and jumping to go along with plyometric drills and usage of individualized data analytics.

Even through all the differences to the offseason routine, Baier is encouraged by what he has seen from the 2020-21 Hurricanes. 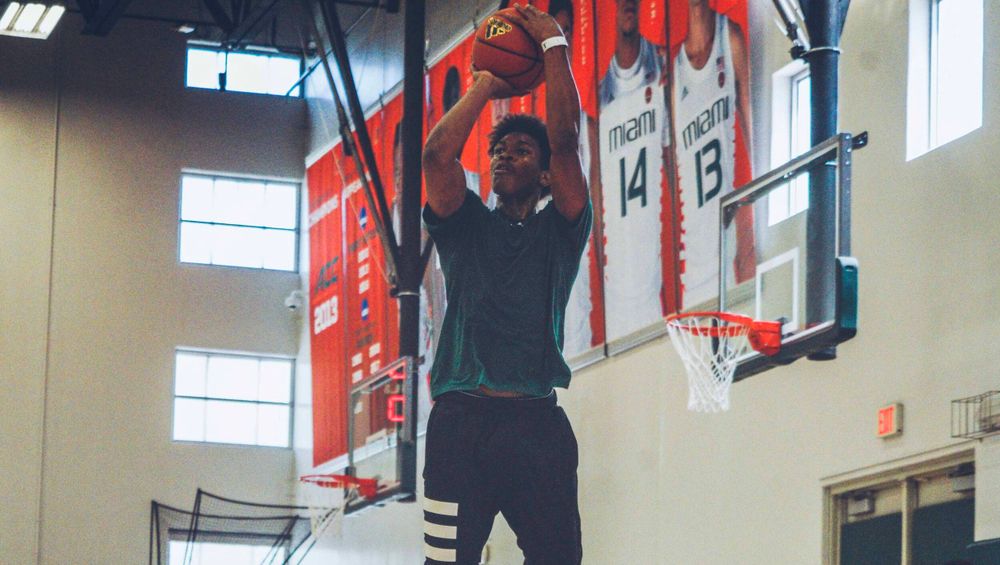 “I want to compliment our guys. Their level of attention to detail, their level of patience, their level of caring for keeping the facility clean and sticking to the program has been awesome,” Baier shared. “Like I said, kind of taking a very simple approach with some of these more advanced guys, they could’ve easily brushed it off and been like, ‘Man, I just want to lift big weights’ or ‘I just want to do this or that.’ But they have really done a great job of executing the plan really hard.”

Larrañaga, heading into his 10th season at the helm of the Hurricanes, agrees with the assessments of his second-year strength coach.

The two-time ACC Coach of the Year is happy with his team’s current situation, even if getting there was different than usual.

“I think our guys have done an amazing job. They have a lot of energy, a lot of enthusiasm,” Larrañaga said. “They’re following instructions very well and working hard at things that we’ve asked them to work on. Whether it be in the weight room or on the track or on the court, they’re getting in better and better shape. They’re working on their skills, they’re improving that part of their game. So, I really like where we are.”

While Larrañaga is pleased with his team as a whole, a few players in particular have stood out to Baier since their return to campus, including Walker and sophomore guard Isaiah Wong, both of whom have added 10 pounds of muscle since last year.

Nysier Brooks, who has dropped four percent of his body fat, and fellow redshirt senior center Rodney Miller Jr., are also among those who have impressed in the weight room.

The Hurricanes’ two freshmen, forward Matt Cross and guard Earl Timberlake, have also made their mark early, despite dealing with an abnormal first offseason as collegians.

As a group, regardless of class, the Hurricanes have been working together to achieve maximum efficiency and performance during their workouts.

“Everything is team-oriented with us, everything, especially in the weight room,” Walker said. “If we see, for example, Harlond [Beverly] is pushing like 60-pound dumbbells and Zay picks up 50, we push Zay to pick up 55 or try to get to that 60 like Harlond did, like his partner did. We always try to push each other to be better.”

On the docket now for Baier is preparing his players for the start of official practices, which begin in just over two weeks, as the NCAA recently pushed that date back to Oct. 14. Once that time does come, Baier wants the Hurricanes ready for multiple hours of on-court work five or six days a week.

“I want to compliment our guys. Their level of attention to detail, their level of patience, their level of caring for keeping the facility clean and sticking to the program has been awesome. Like I said, kind of taking a very simple approach with some of these more advanced guys, they could’ve easily brushed it off and been like, ‘Man, I just want to lift big weights’ or ‘I just want to do this or that.’ But they have really done a great job of executing the plan really hard.”

The next step after that, of course, will be to get the team ready for the start of the season in late November.

“We’re going to continue to improve our strength and conditioning right up until the season and then we’ll switch to a maintenance program once we get there,” Larrañaga said. “But we’re not nearly in as good a shape now as we will be in another month and we won’t be in the kind of game shape we need to be in a month as we will be come November.”

In order to get into that game-ready shape as the days until the to-be-scheduled opener tick down, Baier will indeed continue to pick up the training intensity.

Each workout—conditioning, lifting or otherwise—will be done with the specific goal of having each player’s body ready for 40-minute contests when the 2020-21 campaign begins. 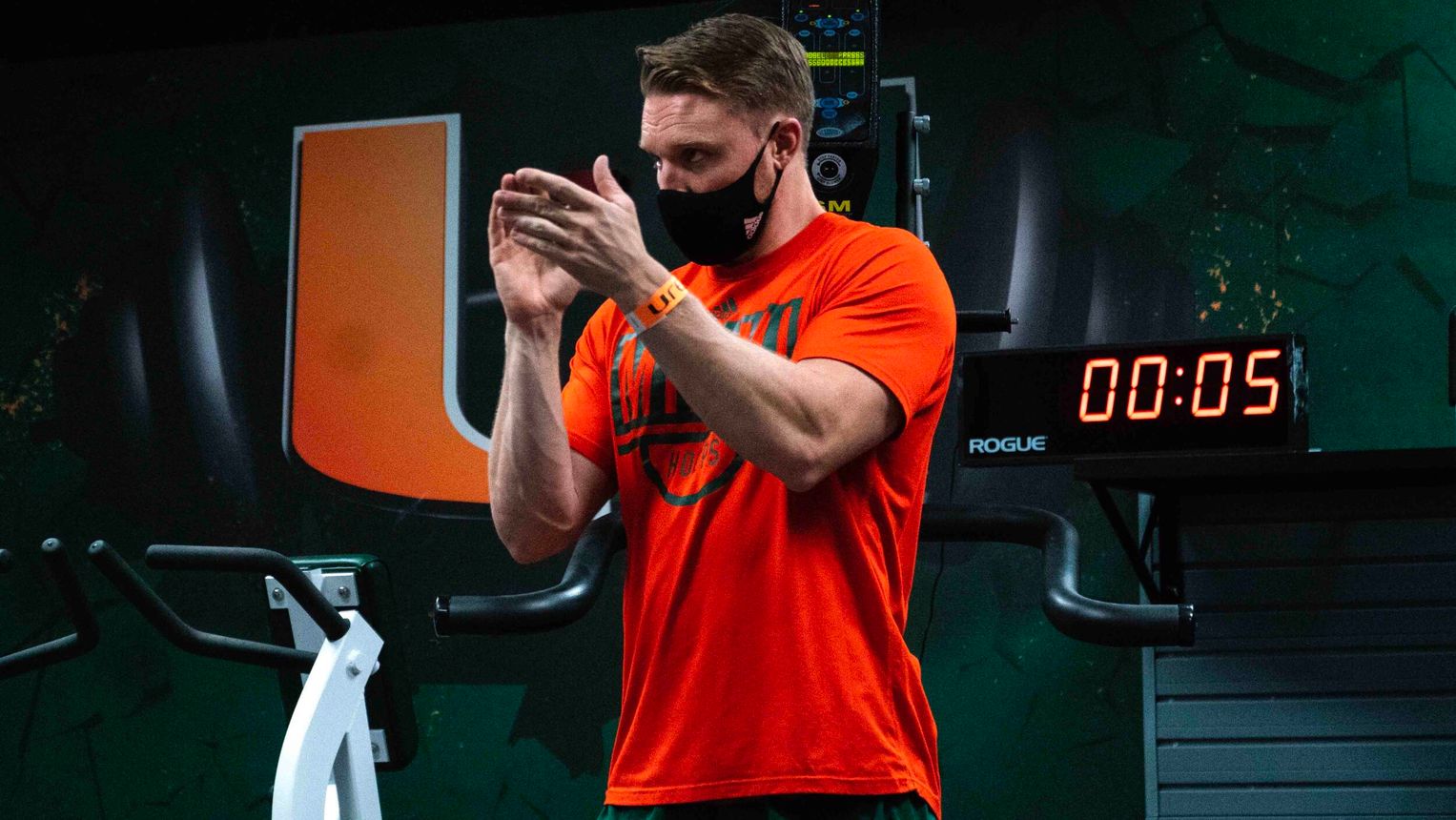 “Getting close to the season, everything we’ll do from a conditioning standpoint will be high velocity and competitive because that’s where we need basketball to be. That’s how the game is,” Baier said. “It’s one of the most dynamic games in the world in terms of sprints, jumps, change of direction. We’re going to train that way and we’re going to train them that way with a high intent, high effort and make sure we’re doing it frequently and being safe doing it, too.”

For the players themselves, regardless of the different training regimens over the past seven months, they are just ready to get back on the hardwood.

The Hurricanes are looking forward to the chance to compete and, through Baier’s assistance during an uncharted offseason, do so at full strength.

“This is the first time in a long time we get to practice and … we’ve got a lot of healthy bodies ready to play, ready to compete,” Walker said. “So, we’re just excited. We can’t wait.”