A searching Alicia Blagg arrived outside of the pool deck.

Wearing her hair in a ponytail, she swept a fly away hair out of her blue eyes and wore a soft smile.

A thick British accent came out of her mouth.

A small, red scar was stained on her left wrist, about the size of a penny. Five Olympic rings were tattooed on the palm side of the same wrist.

“I got it on my wrist that had all the surgeries on it because I made the Olympics through all the struggle,” she says.

She walked into the pool deck, swiping her student ID to get through the doors – a routine process.

She chose a shaded spot at a silver table to sit, placing a heavy English book down on the table.

Her favorite subject in school was kinesiology. She liked to learn about how to body moves. When she was younger, she wanted to be a physiologist. Blagg ended up as a criminal justice major.

She always wanted to join the criminology club, she just never had the time.  She chatted for a few minutes about the pressures of academics and athletics.

Her two year old Cavapoo, James, has helped her deal with pressures and manage her mental health.

She takes him everywhere.

“I got him the summer of 2018. I always wanted a dog. I was like ‘With everything going on, I just need a companion,’” she said.

Blagg still has a lot going on. 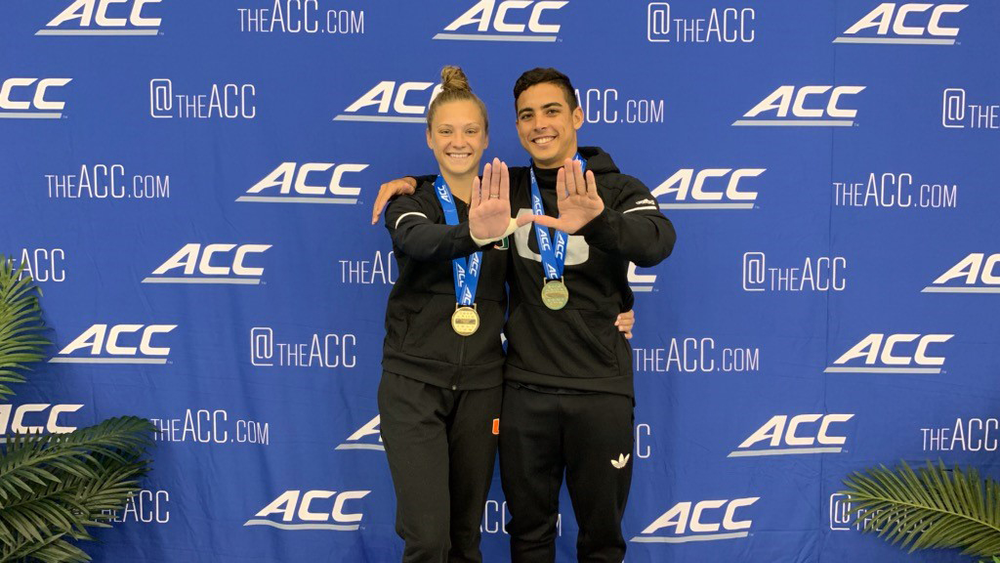 A diver who has traveled since she was nine years old, Blagg feels like she never had much of a “normal” childhood. Sure, she was able to travel all across the world. But, she does wonder what a “regular life” would be like.

A gymnast and swimmer to start, Blagg loved “sport.” In elementary school, she remembers being involved in everything.

She eventually tried diving and fell in love with it.

But, diving took up a lot of her time.

“I kind of really didn’t have a childhood, I couldn’t go on family vacations,” she said. “I started diving when I was seven years old, but I traveled a lot with Great Britain when I was about twelve years old.”

Her childhood routine of going to school, attending practice, and going to bed after dinner was still very much a part of her life during her time at Miami. And being an athlete never got any easier for Blagg.

After fracturing her left wrist in 2013, Blagg went onto the Olympics in Rio three years later – her second trip to the Olympics. Cortisone shots became her best friend, but, the pain in her wrist was still the same.

“They would inject me with the numbing thing twice a day, just so I could dive,” she said.

Eventually, the cortisone shots were not enough. Her ligaments had snapped, making her bones hit each other and leaving her with a pain she could not ignore.

“I had a chunk out of my radius bone,” she said. “The doctor said he would shave the bone off, but that was my second surgery on my wrist in less than a year.”

Being forced to redshirt for what was supposed to be her first season of diving at Miami, Blagg felt defeated. But, nonetheless, she persevered for the next season. Placing second in Europe, Blagg proved her ferocious approach to recovery and rehab.

And just when she was able to celebrate her victory, she tore another ligament in the opposite wrist. Shortly after, she tore her labrum in her right shoulder. Her dream of attending the Olympics in 2020 seemed like it was moving further away.

Countless surgeries later, Blagg is able to laugh it off.

“I asked my mom the other day, did you do something to me as a child,” she laughed. “It’s like I’m made of glass.”

Head diving coach Randy Ableman earned the right to represent the United States at the Olympics. And he saw Blagg fight her way through pain – more than just physical.

Blagg’s father was diagnosed with leukemia in September of 2017. Being far from home, Blagg had it rough.

“In the end, I’m really proud of the kind of person she is and her possibilities for the future. She’s had a great career in diving,” said Ableman. “I just can’t say enough good things about her.”

And Blagg feels the same.

“He was like a father figure through hard times. My second father.” 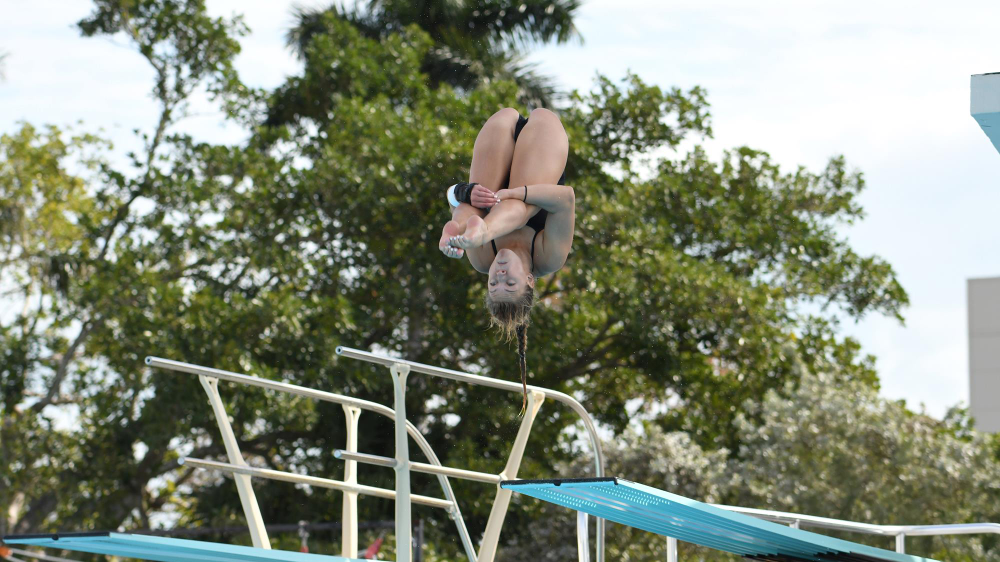 Blagg vividly remembers her father, John Blagg, dropping in weight when he came to visit her at school.

“We knew something wasn’t right,” she said.

A sad look came over her face. She knows pain. After the visit, her parents went back home and Hurricane Irma hit Miami shortly after. Blagg was juggling the health of her father, bad weather, and school. And her mom had to break the news.

“I stayed in bed for three days,” said Blagg. “Nothing goes through your mind except ‘I’m going to lose my dad.’”

Wanting to forget everything in front of her, Blagg was ready to go home. But, her father convinced her that everything would be okay and she should stay in school.

So, she did. And Blagg remembers having dark days where her mental health was suffering.

She thought about her mom, Helen, being alone during a difficult time. Both of her parents were unable to work. She describes the time as a “dark spiral.”

Yet, much like her injuries, she pushed through that, too.

And as for her father, well, he was right – everything would be okay.

“He has had clear scans and he has one more left.”

I have a whole new perspective on life. I woke up one day and knew that these things happen for a reason. This is just life."

Blagg graduated in May.  She is currently studying forensic psychology and criminology at Edinburgh Napier University in Scotland.

She sees a potential career as a detective, calling it her “main goal.”

Blagg predicts that, within ten years, she will have a family.

But her time in Miami stays close to her heart – and her teammates.

Sophomore diver Brodie Scapens had a tight bond with Blagg. Scapens says he will always be there for Blagg, as she has been there for him. But, he will miss her.

“Me and Liss had a really good relationship since I got here,” said Scapens. “She went through a tough time and I felt for her,” he said. “She sort makes the team, it’s not the same when she’s not there.”

But, Blagg is ready to get going with her life.

And through it all, Alicia still has a smile on her face.

“I wanted to be an NCAA Champion, but sometimes it just doesn’t happen,” she said.

Even if she was dealt some bad cards, Blagg has made peace with it.

“I have a whole new perspective on life. I woke up one day and knew that these things happen for a reason,” said Blagg. “This is just life.”

She flashes her right elbow. A word inked into her skin: