Mature Beyond Her Years

Now a University of Miami women’s tennis player, Tahan hails from Israel, where military service is mandatory. Once women turn 18, they must serve for two years, while men must do so for two years and eight months.

Tahan’s obligatory service delayed her college matriculation by two-and-a-half years, as she did not come to Coral Gables until January 2020, days before her 21st birthday.

“I felt like I had a responsibility about something way bigger than me and I [was a] part of something [for which] I had to do my part perfectly because the people around me trusted me,” Tahan shared. “It’s something really important for my country. So, I felt really proud when I wore the uniform.”

Her first stop after enlisting was to attend introductory training camp, where she learned about a variety of different topics important to her service.

Following a month of instruction, Tahan began her job as a secretary at a base in Tel Aviv, about one hour south from her home in Tel Mond.

Despite beginning her time in the military, Tahan still had the chance to continue practicing tennis. If an athlete in the IDF meets certain criteria, he or she is given special privileges to train and compete while serving.

“One of the rights is to travel during your service and for that you have 90 days that you can [use each year],” Tahan explained. “It’s like vacation days that you’re allowed not to count to the army and then you can compete and practice or whatever you want.”

Furthermore, Tahan had the option to tack on additional travel time each year, but those days would have to be made up and replaced, extending her overall service time. Thus, after utilizing that option during her second year in the IDF, Tahan did not finish until Sept. 5, 2019.

Although Tahan’s ability to continue training was certainly a benefit, it did make for a hectic schedule.

The 5-foot-8 right-hander would practice in the morning, drive to her base for a few hours of work and then make the trip back to Tel Mond to practice again in the evening.

“I was really busy during the day and I had really long days, but in Israel, everyone is in the same position,” Tahan said. “It’s tough, but we are the same.”

Tahan’s father, Gil, has spent much of his life in the IDF and currently serves as a colonel. 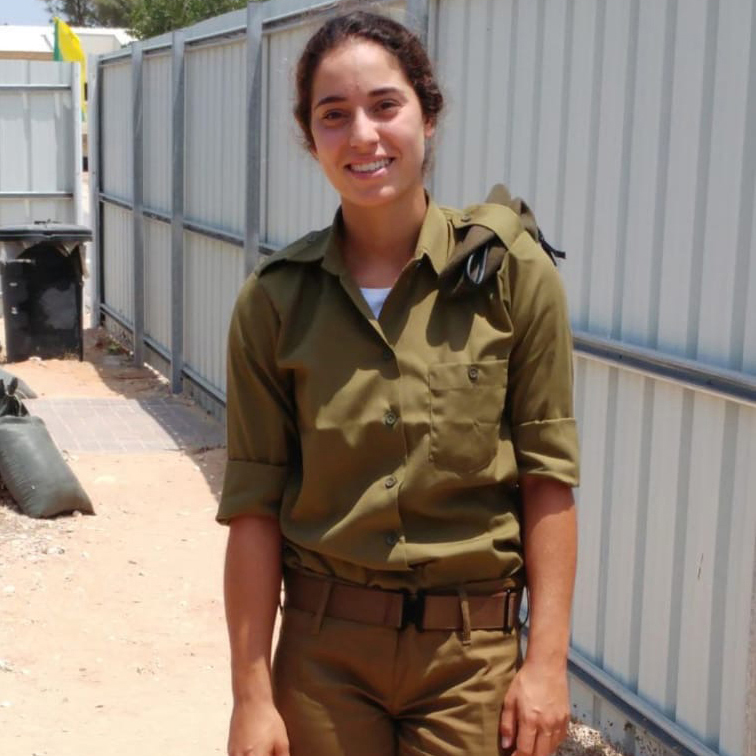 She received advice from him about how to handle her workload both on the court and in the office. That, paired with the knowledge she gained in training camp, helped prepare her for service.

“He told me to be effective with my job since my schedule is really busy and I have a lot of stuff during the day,” Tahan shared. “[He told me] the basic stuff because I actually learned a lot during the first month. They teach you everything, basically, but my dad told me to be more effective and to manage my time well.”

Despite the difficulty in juggling military service with training as a competitive tennis player, Tahan feels she did get better on the court.

She credits that advancement to variety of different factors, some internal and others to those around her along the way.

“I can tell you I did [improve]. It was tough, obviously, but I had the discipline for being better. My discipline was good; I was really motivated to succeed as a player,” Tahan shared. “I had the right support from my coach and my family. So, I think this is what helped me to be better during my service. And also the army really helped me.”

In June 2019, three months before her discharge, Tahan began the college recruiting process. She eventually selected the Hurricanes over offers from Baylor and Ohio State.

“I felt like I had a responsibility about something way bigger than me and I [was a] part of something [for which] I had to do my part perfectly because the people around me trusted me. It’s something really important for my country. So, I felt really proud when I wore the uniform.”

Tahan thinks her time in the military helped prepare her for the adjustment to both collegiate tennis and college as a whole.

“I feel like I grew up faster than [others] in some views and I experienced more than them in other situations,” Tahan said. “I was part of a big organization like the army and I met a lot of people, almost with every [background], different than me. Basically, I experienced situations that they are not familiar with. I think this is what helped me.”

That sentiment is one echoed by her head coach, Paige Yaroshuk-Tews, who has previously coached one other former IDF service member.

“Maya’s maturity and age have undoubtedly allowed her to make the transition to college tennis seamless,” Yaroshuk-Tews said.

While her military service aided the 5-foot-8 right-hander when she got to Miami, it did far more than that on a larger scale.

Those two-plus years taught Tahan about her aspects of life well beyond tennis.

“In Israel, the reality, I think it’s different from the whole world. It’s not only about the army,” Tahan shared. “I feel like I experienced more about the reality of life with as a result of the security situation in Israel. It makes us all grow up faster.”

Tahan’s military service is now behind her, but the experience of those two years and the lessons she learned will stay with her forever.