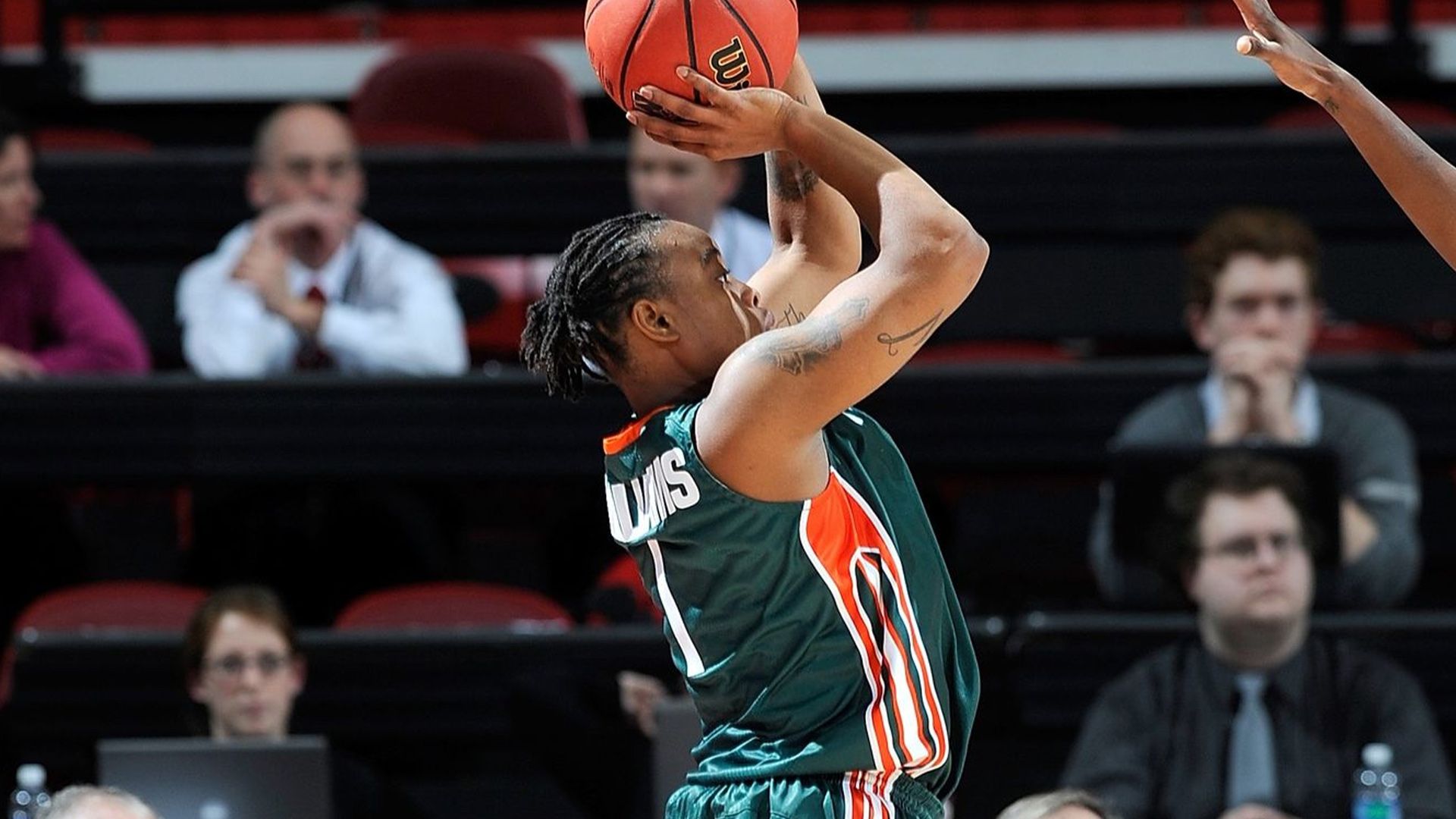 Gamers Get It Done

On a cold, clear January day in College Park, Md., two teams met with high stakes on the line.

The stage was set. All that remained was for the gamers to show up.

Charmaine Clark and Diane Barnes were the lone seniors on that Miami team. The rest of the team? All underclassmen, a group anchored by the backcourt of future All-Americans Shenise Johnson and Riquna Williams.

“We were still really establishing ourselves,” head coach Katie Meier said. “We had played a tough schedule and we definitely needed a signature win.”

The game at Maryland would provide the Canes with said win if they were able to pull off the upset of the Terps. Coming into the contest, Meier and the Canes had an advantage in their back pocket. They absolutely thrived in tough road game environments.

Sitting at 6-1 on the road so far that season, Meier recounted that the 2009-10 Canes garnered immense satisfaction in silencing the home crowd. When they were on the road and the home team was silent, that was Miami’s “standing ovation” and Meier and the Canes loved it.

Despite excelling on the road, nerves were still in play heading into the game.

“Coming into an atmosphere with a 48-game winning streak on the line, you don’t really know what to expect,” Miami alum Morgan Stroman said. “We just went in there thinking ‘let’s not make it 49’ and planned on doing what we had to do to win.”

The Canes’ offense was electric to start the game, posting a 10-0 run in the first five minutes of action, led by the senior duo of Clark and Barnes, who accounted for eight points. Miami continued to produce, extending its lead to 15 with 7:19 left in the half.

All of sudden, the Canes’ momentum came to a halt. The visitors could not buy a bucket during the waning minutes before halftime, going 2-of-14 from the field. Meanwhile, the Maryland offense recovered from its slow start, gradually chipping away at the Miami lead thanks to a 58-percent shooting clip in the final seven minutes of the half.

With 11 seconds remaining in the first half, Williams was called for a foul, sending Maryland’s Lori Bjork to the charity stripe. A pair of made free throws later, Maryland took the lead for the first time in the contest and headed into halftime up, 32-31.

“At halftime, Coach [Meier] just told us to fight and to not give up,” Stroman said. “We knew we had great players on our team so that wasn’t our issue. We just had to keep that mentality of ‘Just play ball, keep going and just don’t stop.’”

Both teams came out of their respective locker rooms ready to battle, quickly setting the tone for the second half, with four lead changes in the first three minutes of play. Miami and Maryland continued to parry back and forth and the lead for each team never exceeded more than four points.

After shooting just 18 percent (2-of-11) from 3-point range in the first half, the Canes’ sharpshooters found their rhythm in the second, knocking down 7-of-10 shots from beyond the arc. No 3-pointers were more important than the two taken by Williams in the final minute of the game. 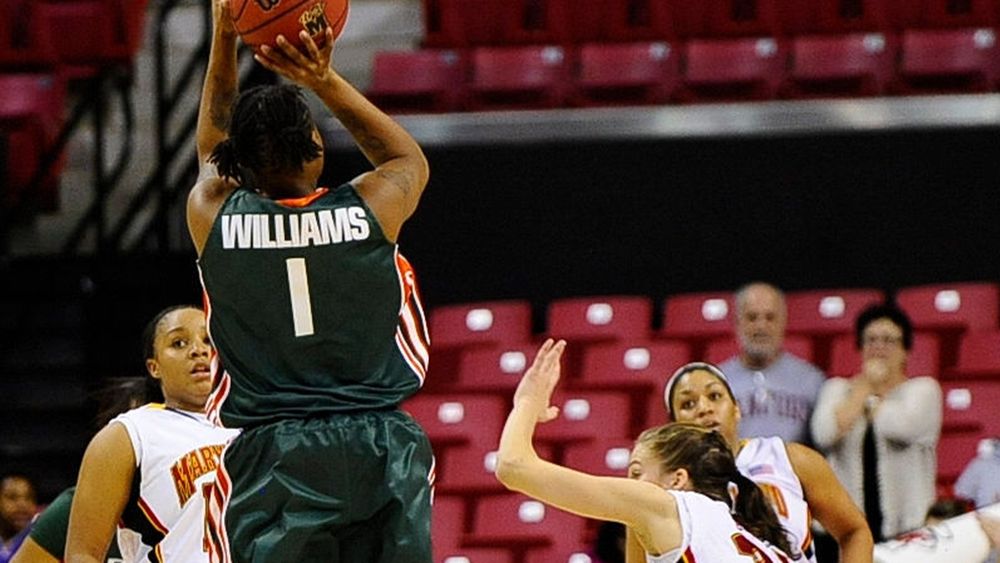 With just over a minute to play, Maryland’s Kim Rodgers hit a 3-pointer to put the Terps back on top by three. Meier called a timeout to set up a play for either Johnson or Williams and sent her team back on to the court.

Williams ended up being the open player and the sophomore poured in a critical three to tie the game at 77 with 48 seconds remaining. Maryland inbounded the ball and gave it to none other than Rodgers.

This time, Rodgers’ shot just missed the mark and Williams showed her true gamer personality, hauling in perhaps the most important rebound of the game to get the stop for the Canes.

“That’s one of those moments as a coach where everyone is wondering, ‘Do you call a timeout?’ Meier explained. “In that particular season, we had a lot of situations where I would remind them that I cannot call a better play than getting one of my players the ball in open space, in flow. So, when Riquna got the defensive rebound, there is not a coach in American who should have called a timeout in that moment. It would have been a nervous timeout.”

Meier put her trust in her team, knowing that her gamers would step up.

And step up, they did.

Williams took the ball down the court and, with three seconds remaining, pulled up and hit the game-winning 3-point shot.

For Williams, she knew it was her moment.

“I was coming off a screen and I had already made up my mind that I was going to shoot it,” Williams said.

“At that moment, you just feel nothing but joy and happiness for your teammate,” Stroman said. “The whole last minute was just a rollercoaster of emotions, but we got [Riquna] another shot and she hit that big-time shot. That was probably one of the best ACC games we could have won that season.”

The game was one for the record books as the Canes earned their first victory over Maryland since joining the ACC and just their second win against the Terps in program history. The victory was made even sweeter considering Maryland bested Miami by an average of 40.6 points in the last three meetings between the schools.

But most importantly, for Meier, it was a great basketball game.

“The Maryland coaches, the Maryland staff, the Maryland fans, the Miami fans, it was a great moment,” Meier said. “There was a ton of respect in the postgame press conferences and from the Maryland crowd. When you lose a 15-point lead, it takes a great amount of composure and sophistication to come back, so they had mad respect for our resilience. 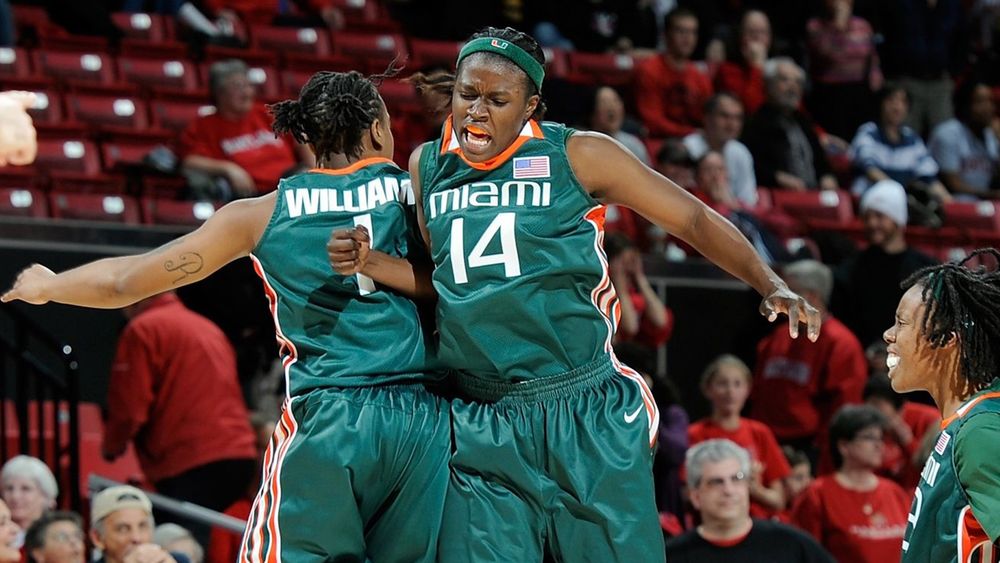