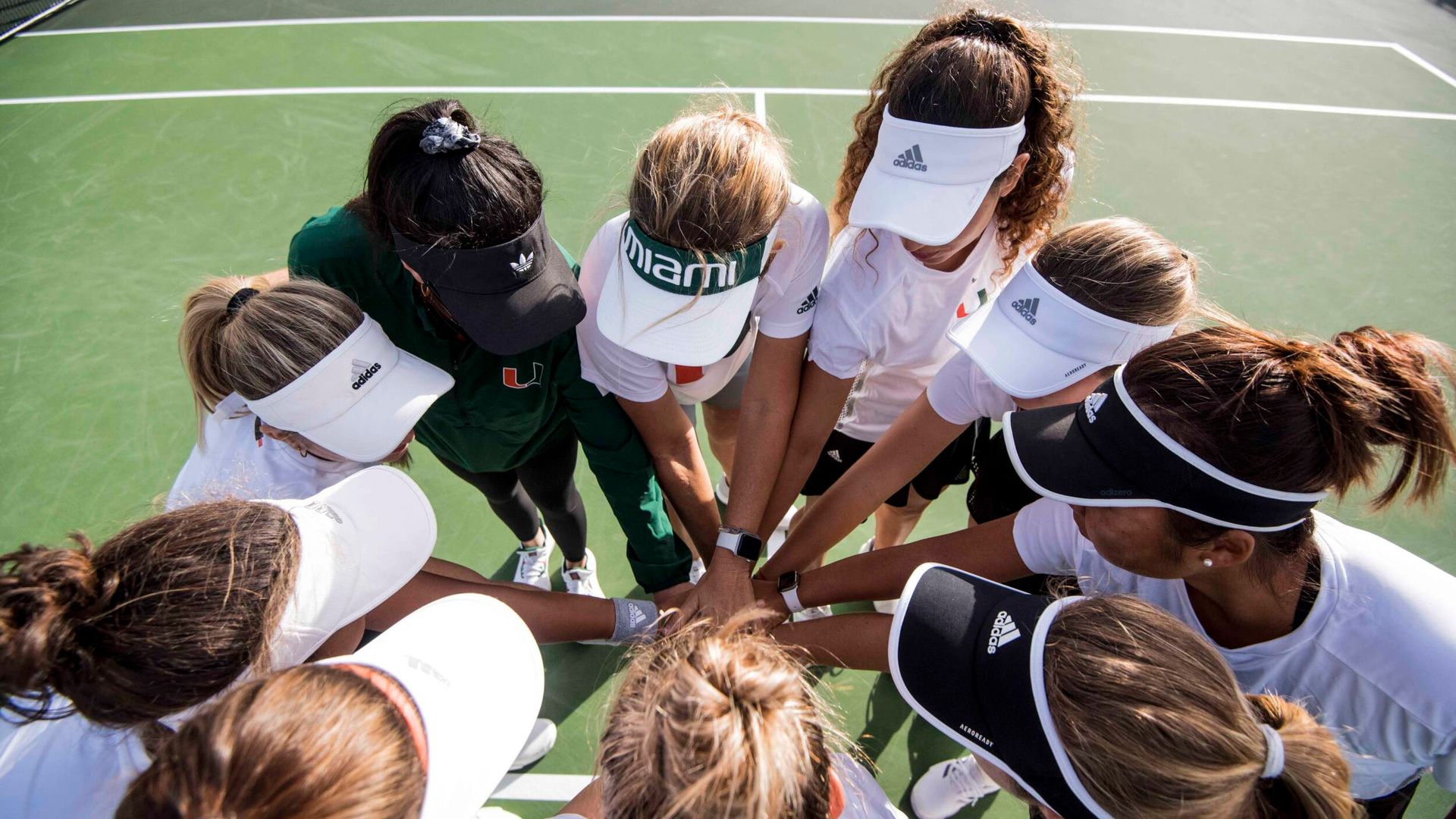 CORAL GABLES, Fla. – It was a rocky fall for the University of Miami women’s tennis team.

The Hurricanes simply did not have the mindset 19th-year head coach Paige Yaroshuk-Tews is used to seeing in her storied program.

“From a coaching perspective, we kind of had a culture on the team that, quite honestly, I didn’t love,” she said. “I did not love our culture. We were divided in the fall.” 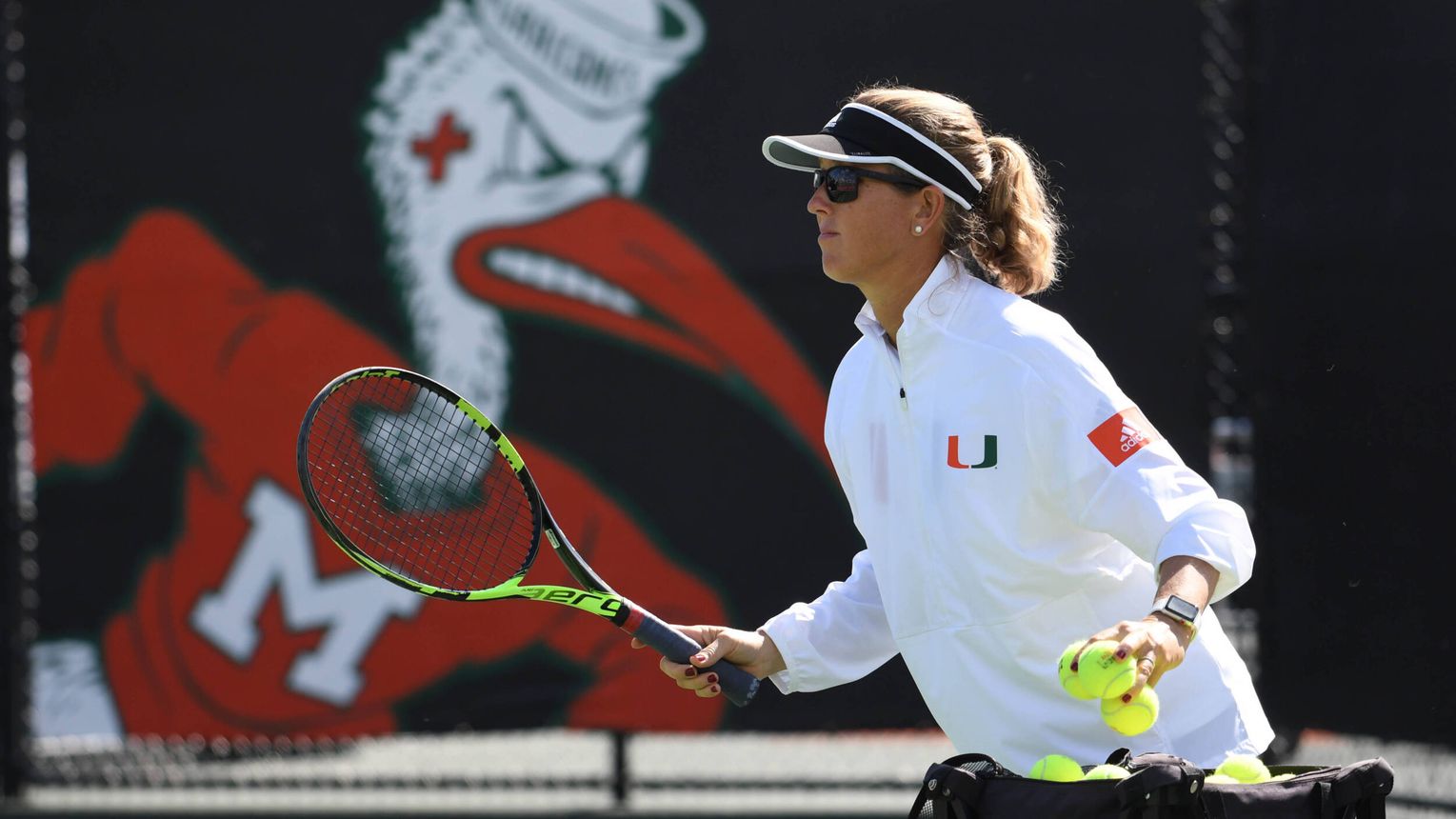 The Hurricanes also had two other freshmen—Nada Dimovska and Selma Cadar—on the eight-player roster, giving them five total first-year student-athletes.

For reigning NCAA singles champion, Estela Perez-Somarriba, one of just two upperclassmen on the team, the youth brought a degree of uncertainty.

“Honestly, I didn’t know what to expect because it’s not easy being a freshman,” the senior said. “There are a lot of things going on and, especially during the season, they had to adapt very quickly.”

The freshmen themselves did not know what to expect either. All college newcomers face a difficult transition, but for these three it was even more difficult.

Each of them had to adjust not only to college, but also to life in a foreign country, playing tennis in a team format and competing for a new coach, all with under three weeks to prepare for the start of the season.

“Before [coming to Miami], I was practicing with a few teammates, but it was different because I was competing alone,” Tahan said, “My problems were only mine. Now, when I got to UM, I had a responsibility to play for something bigger than me, like for my teammates and for my coach and for my university. So, it was very special for me.” 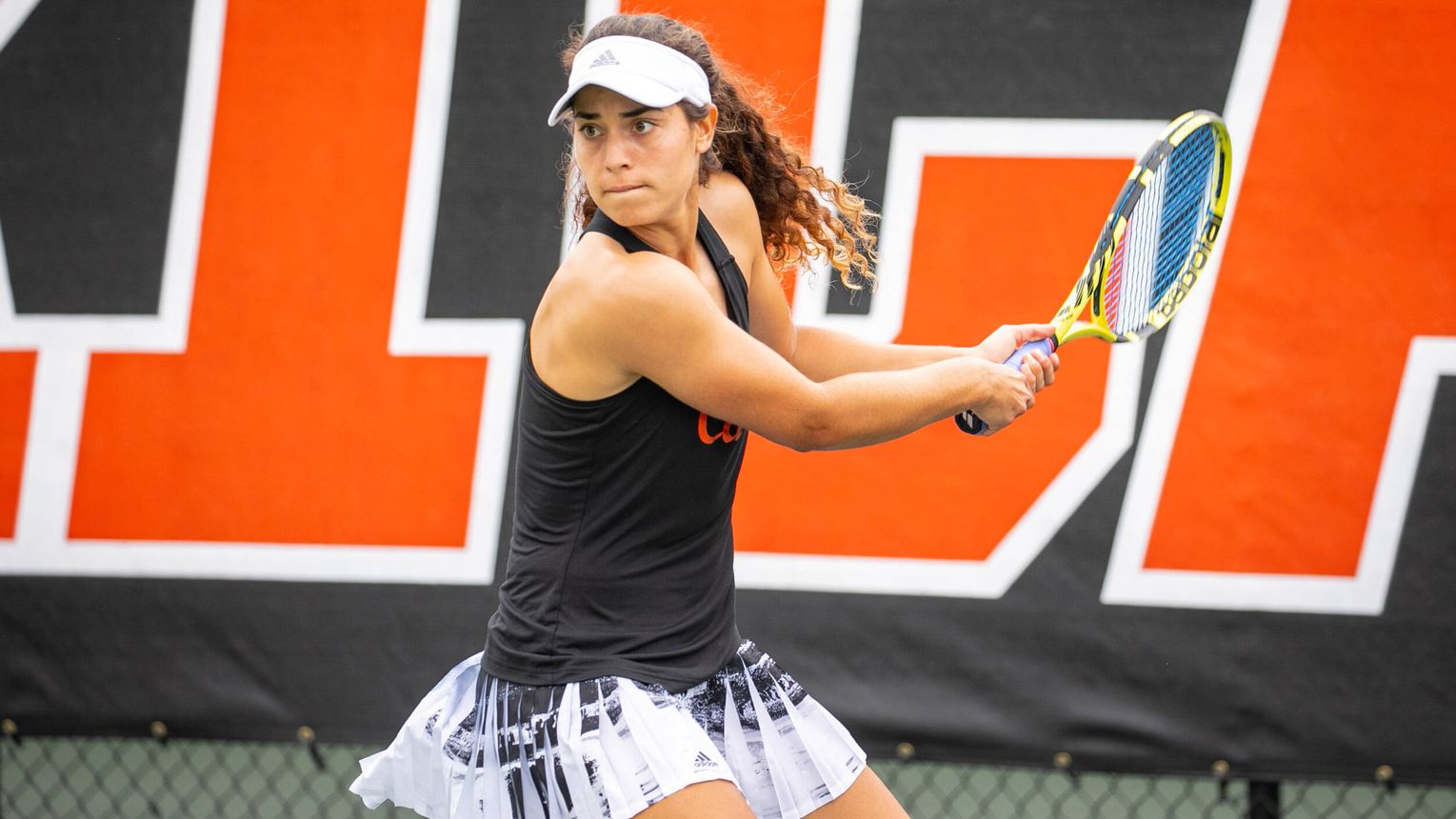 Progressively, the Hurricanes began to gel as a unit. The bad habits from the fall started to disappear, the newcomers began to understand the situation and the culture began to change.

Nonetheless, the results took a while to show. Miami opened the dual match slate with a 1-2 mark, although both losses were to top-20 foes away from home.

The tide began to change Feb. 14, when Miami went on the road to play No. 17 Georgia Tech in Atlanta. The Hurricanes, then unranked, pulled off a 5-2 victory over the Yellow Jackets to begin conference play in stellar fashion.

Furthermore, three of Miami’s freshmen picked up singles wins in the decision, with Urrutia clinching the road triumph.

“I think that after that, everybody kind of connected a little bit more and that was the moment where I was like, ‘We got this. Everybody is on board, everybody is on the same page,’” Perez-Somarriba recalled. “Every player was bringing something to the team at that point and I have never experienced that at Miami in my four years. Just having that feeling was great.” 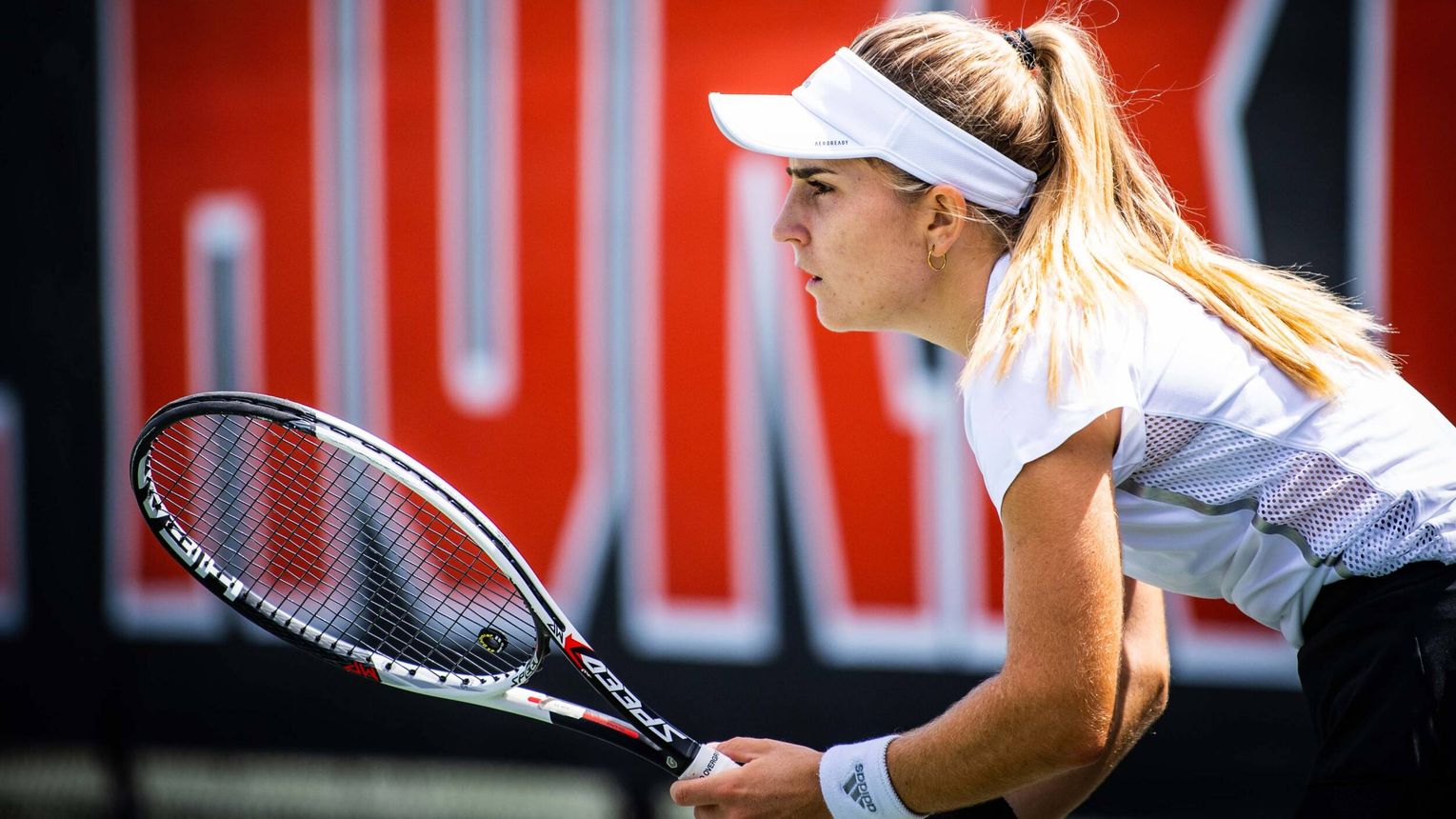 Next, the Hurricanes nearly upset fourth-ranked Florida State, dropping a 4-3 decision. They proceeded to go 3-1 in their next four matches, with the lone setback coming against undefeated, top-ranked North Carolina.

Miami moved into the top 20 of the ITA rankings for the first time all spring before heading to Louisville for a conference clash on the final day of February.

"When I got to UM, I had a responsibility to play for something bigger than me, like for my teammates and for my coach and for my university. So, it was very special for me." -Maya Tahan

The Hurricanes dropped the doubles point, but swept all six singles matches, with four freshmen bringing in a victory.

“After this match, I felt more connected to everyone and [felt like] the vibe was better than before,” Tahan said. “I kind of understood what they were expecting from me.”

Tahan, however, did not get the chance to display that understanding on the court.

Miami’s next match was set for March 13 against Yale, but it never happened. The spring season, for all teams in all sports, halted the second week of March because of the COVID-19 pandemic.

For the Hurricanes, the cancelation meant that just as they began to fully bond, they had to break apart.

“Obviously, the season ended not the way we wanted it to, especially because we were just coming [together],” Dimovska said. “We were doing really [well] and then it just had to end like that, but another perspective is, I think the situation, it’s just going to make us stronger for the next couple of years that we have in front of us, as a team.” 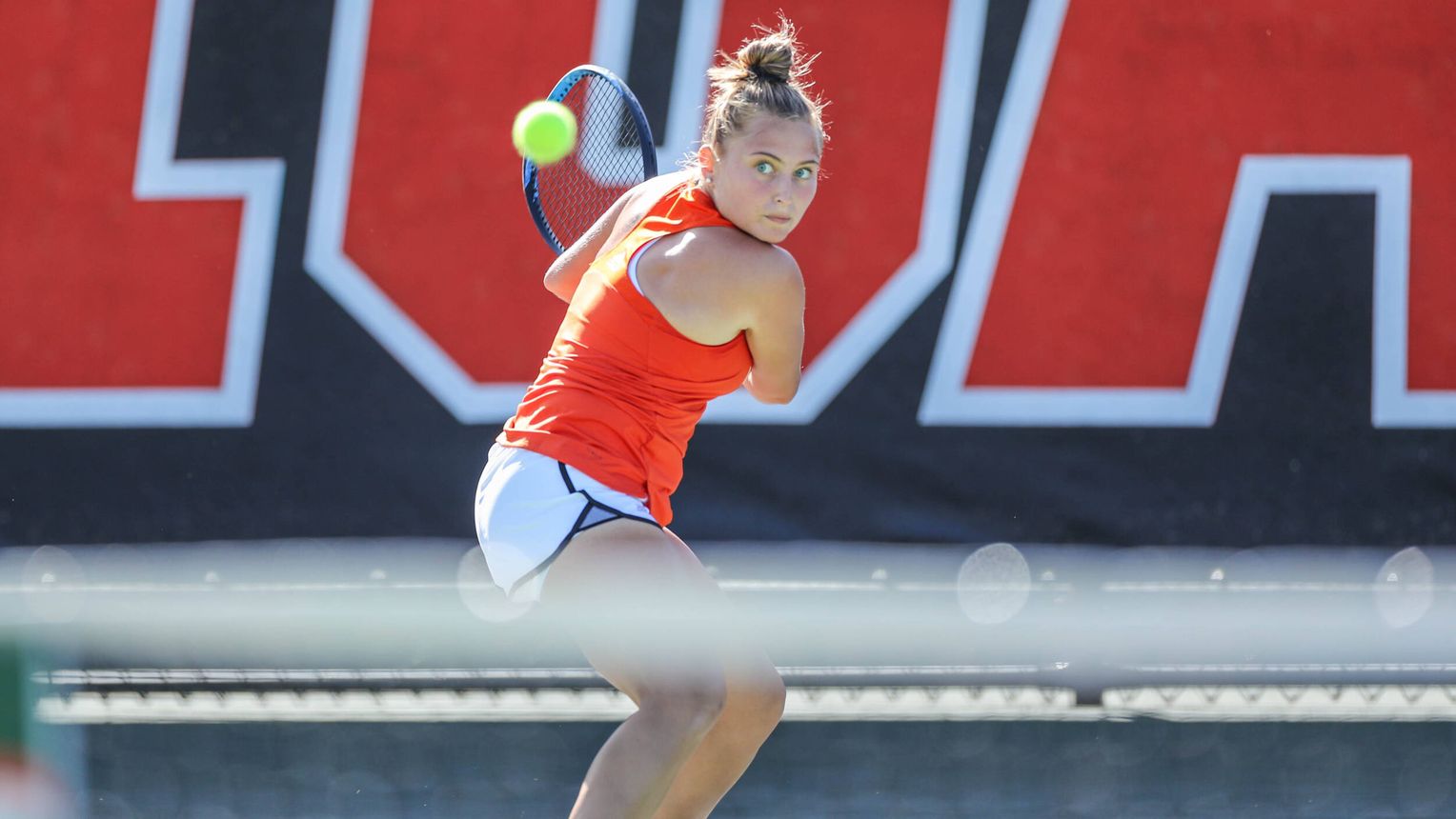 That is indeed the hope for the Hurricanes, that the unity they found in February will still be there when they resume play, whenever that may be.

For Yaroshuk-Tews, though, it is more than just a hope.

“Quite honestly, I expect everybody to come back exactly how they left in terms of their mindset,” she said. “I can’t expect them, physically, to come back like they left. I can’t expect them to be playing the same tennis. Those expectations I really don’t care about. I want them to be responsible when they come back and I want their mindset to be exactly where it was when they left. These are conversations I’ve had with them.”

The players have been doing their part in working towards achieving that. 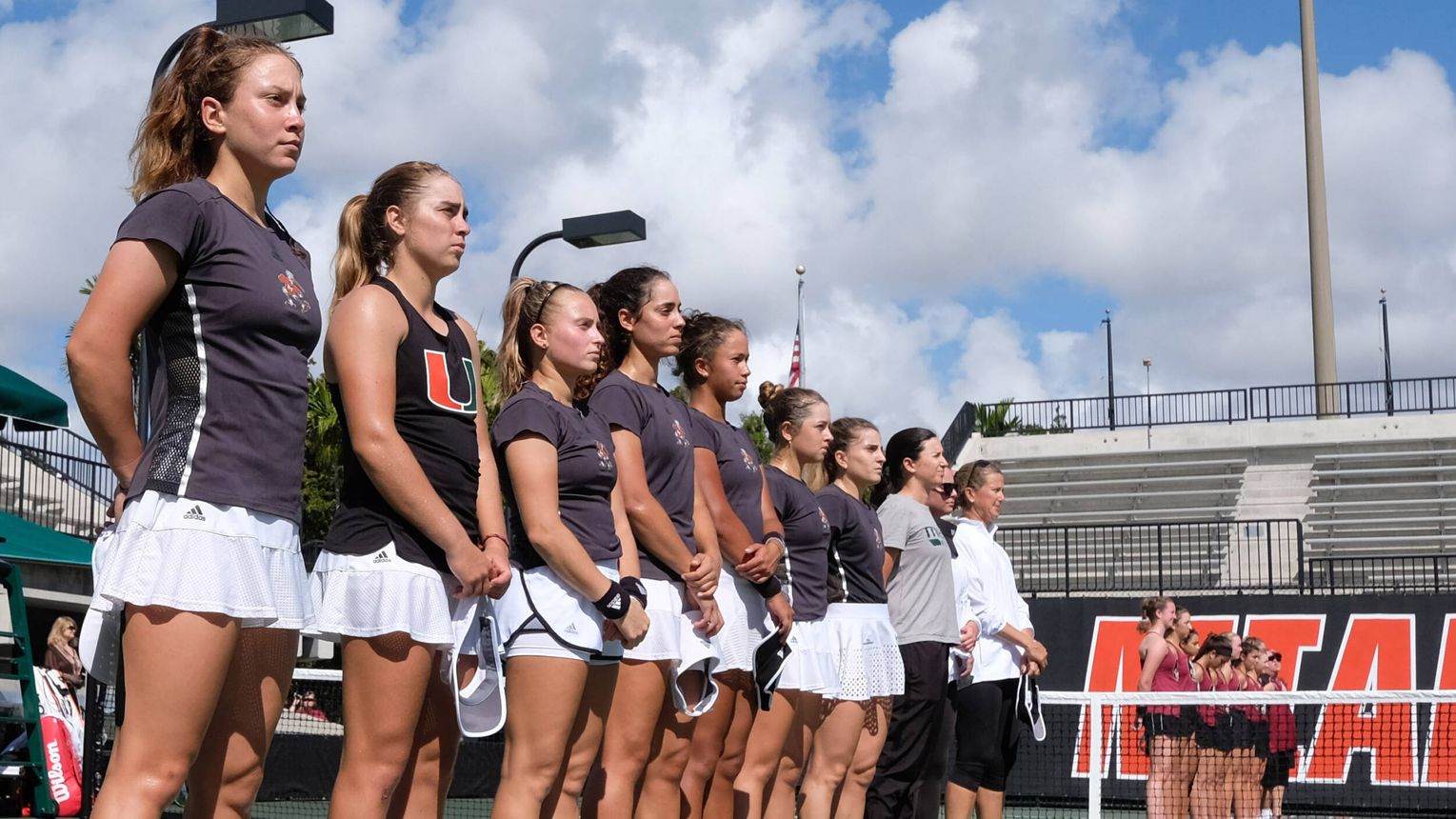 Tahan thinks the primary reason for their improved cohesion was the way they connected off the court and became closer friends. Now, even though many have gone months without seeing a teammate in person, they continue to communicate frequently, both via Zoom calls and by phone.

In fact, Tahan, all the way from Tel Mond, Israel, has made an effort to check in with each of her teammates at least once a week.

“These eight kids are close and that’s so important,” Yaroshuk-Tews said. “It’s so, so important. They care about each other. They’re asking what’s going on and we didn’t have that in the fall.”

The change from December to March was undoubtedly drastic.

Although the Hurricanes never got to fully demonstrate their growth during the stretch run of the season, they will bring all they learned into their next campaign.

“I think that starting where we ended is definitely going to be a goal, just because we ended on a good note. Regardless of the situation, we still ended on a good note as a team,” Dimovska said. “I think that bringing that back once we get back on campus, start training, potentially start matches again and [begin] competing, I think that we already have that [togetherness]. We’ve already been through it, we know what’s going to come and we’re just ready for it.”