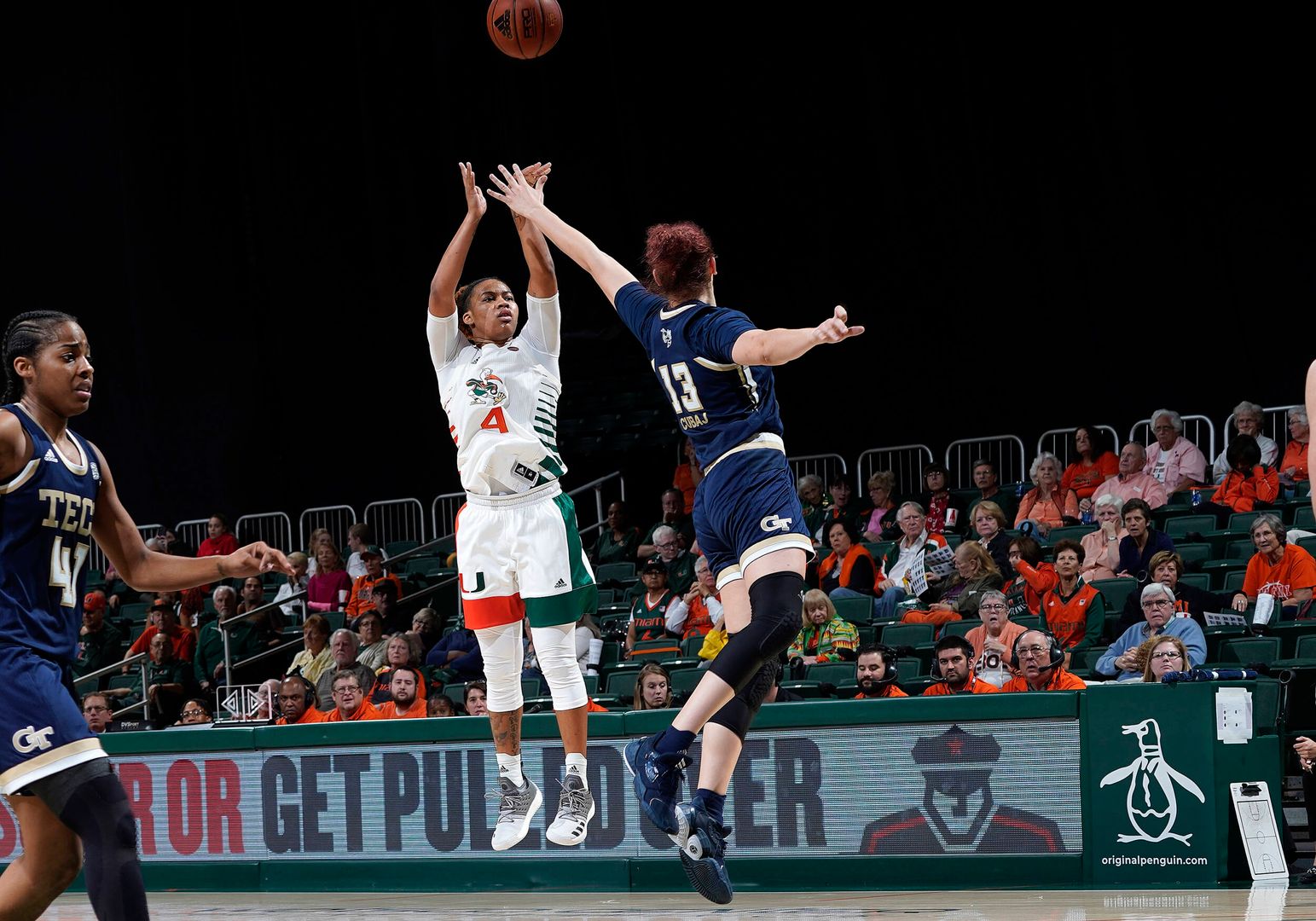 A Comeback Full of Gamers

“Within three minutes of the third quarter, I said, ‘Oh my God, we are going to win this game.’” 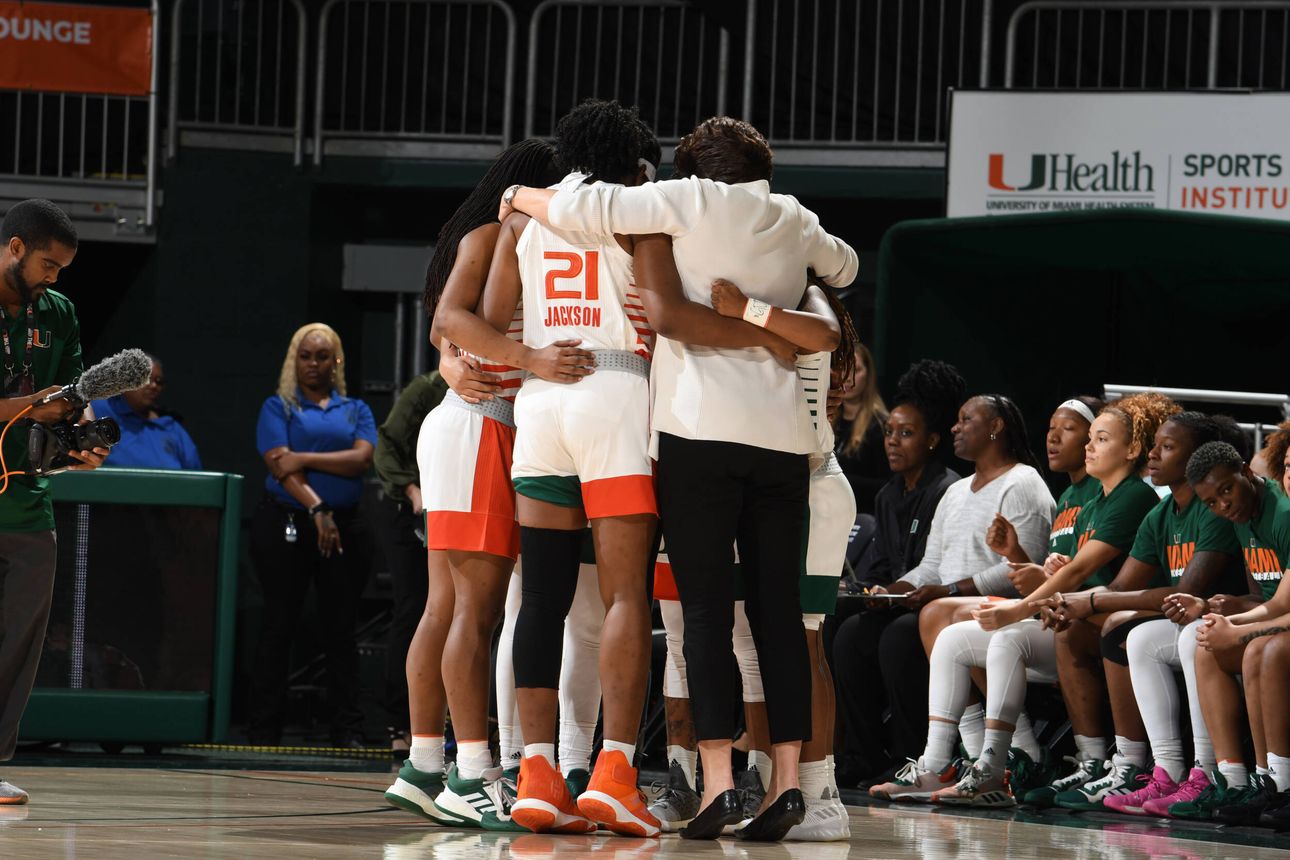 Miami and Georgia Tech were set to square off for the second time of the 2019-20 season. The Yellow Jackets won the previous meeting, mounting a 16-point comeback in the second half to capture the victory in Atlanta.

With an ugly loss to the Yellow Jackets fresh in their mind, the Canes were out for redemption, though they would have to do it without preseason ACC Player of the Year Beatrice Mompremier, who was sidelined with a foot injury.

The game started as a back-and-forth affair, with the teams trading baskets and the lead. A slew of turnovers and missed baskets by the Canes prompted a quick 10-0 run for the Yellow Jackets to close out the first quarter and put the visitors up by six. 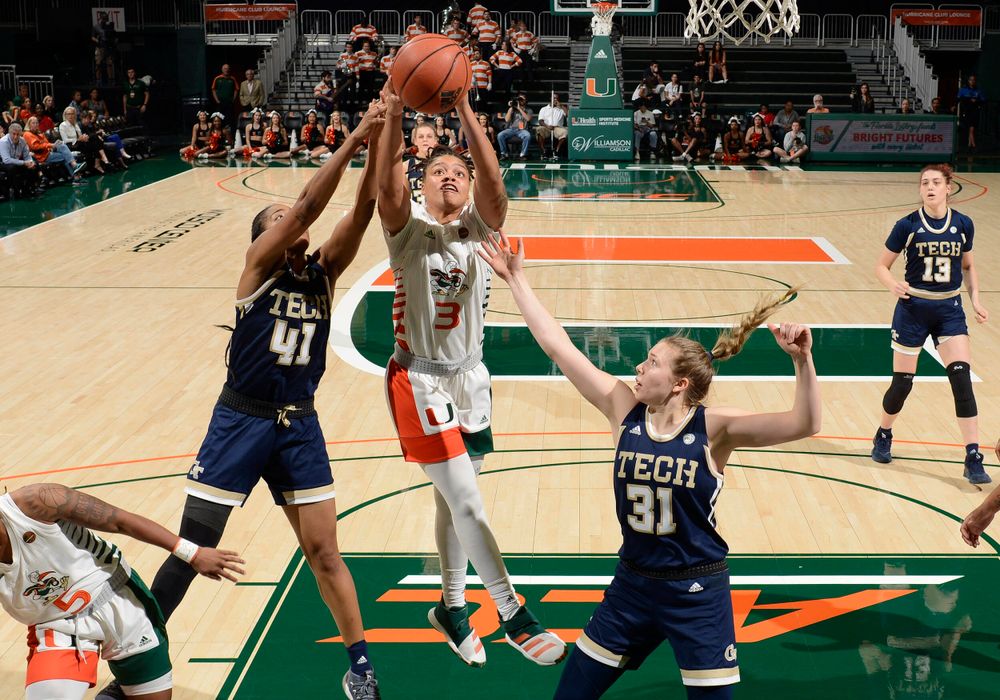 The Canes did not fare much better in the second quarter, as Georgia Tech extended its lead to 18, outscoring Miami 18-6 in the frame to take a 32-14edge at the break. Despite the seemingly insurmountable deficit in the score, the Miami gamers were still playing.

“Endia [Banks] and Jamir [Huston] were out there battling and they were producing,” Meier said. “Those two are completely selfless and would do whatever Miami needs. They listened, they were supportive and they just kept the team faithful.”

Banks finished the first half with four points and five rebounds, leading the team in boards.

Huston tallied four points on 2-of-3 shooting to go along with a pair of rebounds in the first half.

The support of Banks and Huston was critical, as Miami’s more prolific scorers, Mykea Gray and Kelsey Marshall, were both scoreless at halftime. Despite the team’s offensive woes, Meier did not have much to say to her players in the locker room. The reads were there and the plays were being executed, but the shots just were not falling for the home team.

“I was scared because we were down 18 and I didn’t have a lot of new ideas,” Meier said. “But I had faith in what we were doing and the players had faith and that translated to confidence.”

"Your confidence can come and go, but faith stays.”

More than just faith and confidence, the players had passion.

The attitude change was palpable in the air as the players came alive from what Meier called their “zombie state” of the first half.

The full-court press began as Miami worked to claw its way back into the game. The grit and determination by the Canes translated to 15 consecutive defensive stops.

Georgia Tech did not score until the 1:17 mark in the third quarter.

With every defensive stand came more confidence, fueling the Canes’ offense. Redshirt sophomore Destiny Harden started off with a bang, knocking down a 3-pointer 12 seconds into the second half.

Gray and Marshall both got on the board for the first time in the game, finishing the quarter with six and five points, respectively. Their offensive production was a direct result of the confidence they had, not only in the team, but also in themselves.

“We just had to stay faithful,” Gray said. “ I was kind of down, not being able to score in the first half, but my coaches and my teammates just told me to keep my head up, keep pushing and that the next one’s going to fall.”

The Canes’ faithfulness paid off, as the deficit was cut to eight heading into the final 10 minutes of regulation.

It was time for the gamers to move into full gear.

A huge jumper by Harden, a critical layup from Huston, a pair of steals by Gray—the parts were all working for the Canes as they inched their way back into the game. But no gamer moments were bigger than the ones made in the final 16 seconds of the game.

As Meier has said, a gamer is someone who gets stops and hits shots.

Gray exemplified the first part of this saying at the 16-second mark in the fourth quarter, knocking the ball out of Kierra Fletcher’s hands on the baseline under the Miami basket. While the play required further review, it was determined that the ball bounced off Fletcher’s knee and would be the Canes’ basketball.

Get a stop: check.

With 11 seconds on the clock, Banks inbounded the ball to Huston on the wing. With tension in the air, Huston bobbled the pass, but Banks the ball, turned around and rose up for the shot.

“Endia grew up in Atlanta, so it was a special moment for her,” Meier said. “If you wanted someone to pull a shot out of their backside, Endia was that person. She’s a true gamer.”

While getting stops and hitting shots is an important part of being a gamer, Meier made it clear that sometimes, the gamers are also the supporting players.

“Our bench, early in the first half, had a lot of turnovers and missed box outs, so we had to stay with our veterans,” Meier said. “Taylor Mason cannot be forgotten because she was the one that really came through for us. We basically played with six in the second half and Taylor allowed us that rotation.”

Despite the fireworks during the closing seconds of regulation, the gamers could not celebrate quite yet. There was still basketball to be played.

Georgia Tech began the overtime period on a 5-0 run, quickly putting the Canes back in the hole. However, Miami’s situation was not quite dire just yet, as the Yellow Jackets were in serious foul trouble.

The Canes took advantage of the bonus, getting to the charity stripe five times in the overtime period, receiving free-throw contributions from Banks, Mason and Gray. At the 1:12 mark in the frame, Gray drove to the baseline and pulled up for an off-balance jumper, sinking the shot and putting Miami back on top.

With ice in her veins, Gray connected on her four final free throws to solidify the win for the Canes. 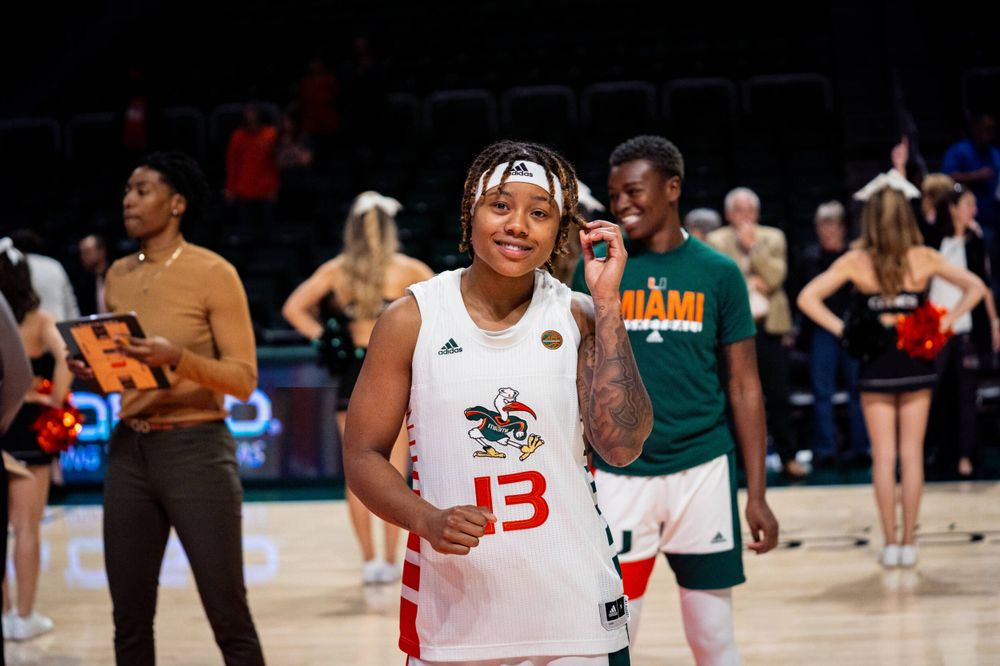