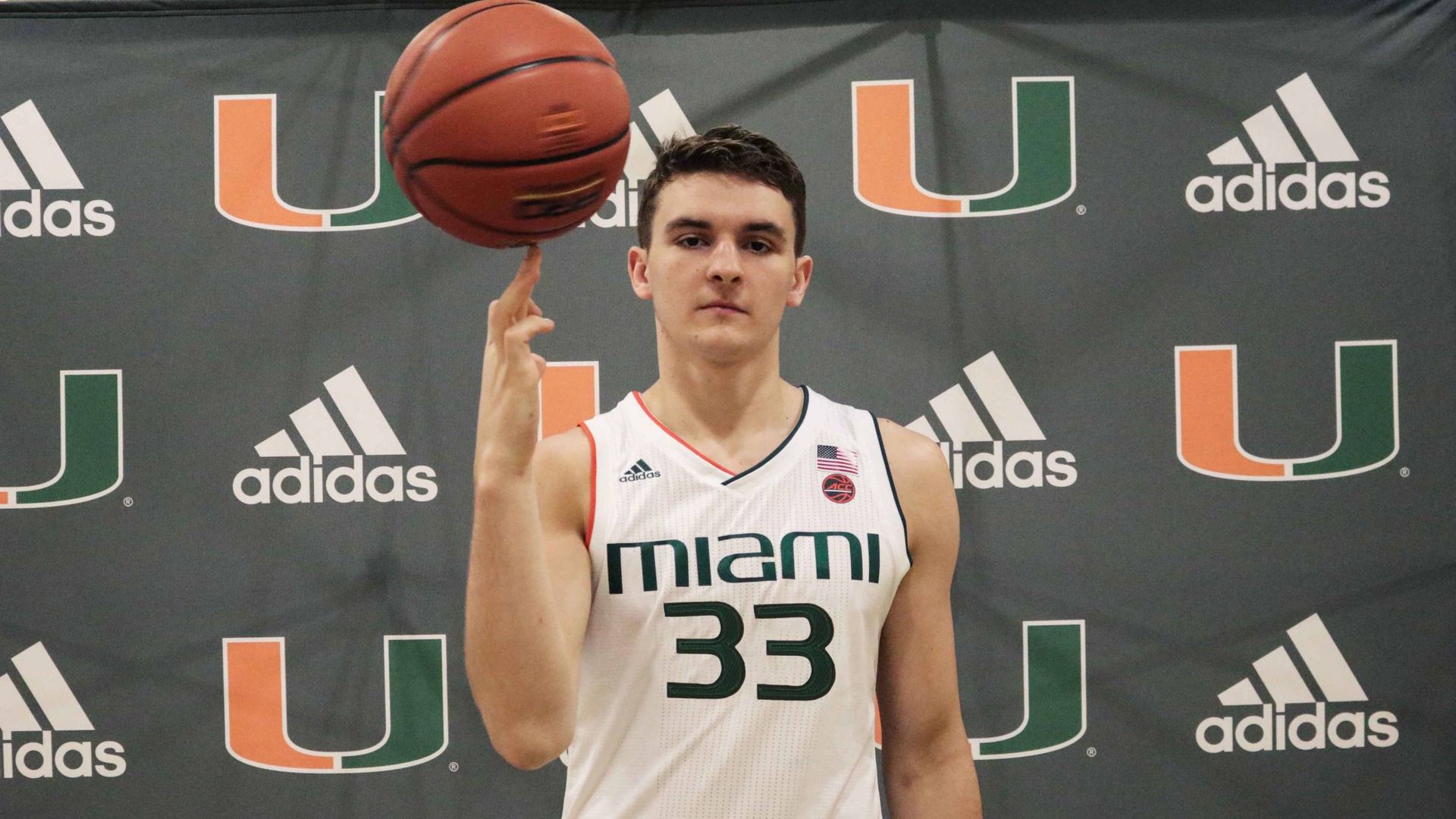 CORAL GABLES, Fla. – When it comes to recruiting, relationships are frequently of the utmost importance.

In the University of Miami men’s basketball team’s pursuit of top-100 prospect Matt Cross, that was especially true.

The most prominent example is a pair of ties to Cross’ AAU organization, BABC. Miami head coach Jim Larrañaga has a long-standing connection with its director, Leo Papile, while former Hurricane standout Bruce Brown, Jr., starred for the program during his high school days.

When Cross came on his official visit to Miami in June 2019, the importance of those links proved to be essential.

“On the visit, when I really got to know the coaching staff, I just liked them more, my kind of style . . . of people and I liked Larrañaga a lot,” Cross said. “He’s more of an older-school guy, which I tend to get along with better. And he’s very close with my AAU coach, whose word means a lot to me. He said Larrañaga was a good dude and when he says that, that kind of means a lot to me.

“And just the chance to come in and, I thought, play right away under a coach [like] that,” Cross added about his decision to choose Miami. “When I asked all the guys and players that have played for him . . . like Bruce Brown, all the guys had no bad things to say and just said they love it there.”

Brown, now a guard for the Detroit Pistons, began his high school tenure at Wakefield Memorial High School, located about a half-hour east of Cross’ coastal hometown of Beverly, Mass.

Cross did not know Brown personally during the latter’s prep days, but their contact picked up as Cross got older.

“I looked up to him, but never really knew him,” Cross said. “Just kind of when I was younger, he was the star, but then when I got older and played for BABC, I kind of met him through Leo and talked to him here and there.”

Brown is one of several recent BABC alumni to make the NBA, alongside players like Michael Carter-Williams, Jake Layman and Nerlens Noel. Rick Brunson and Chris Herren are also BABC products.

“On the visit, when I really got to know the coaching staff, I just liked them more, my kind of style . . . of people and I liked Larrañaga a lot. He’s more of an older-school guy, which I tend to get along with better. And he’s very close with my AAU coach, whose word means a lot to me."

Papile, who also scouts for the Los Angeles Clippers and previously spent time with the Boston Celtics, has been with BABC that entire time. His tenure there extends all the way back to 1977, when Larrañaga was a first-year head coach at American International College, a Division II school in Springfield, Mass.

“Matt was recommended to us by Leo Papile. The first time I saw Matt play, it was after a text message from Leo saying, ‘Hey, you ought to come take a look at Matt Cross. I think you’ll like him,’” Larrañaga shared. “And . . . when I first saw him, I immediately recognized the things that Leo had shared with me in the text as to why he thought I would like him and it was the physical toughness, his ability to shoot the three, his defensive fundamentals and his competitive spirit.”

While Papile may have sparked Miami’s interest in Cross, BABC is far from the only tie the 6-foot-6, 225-pounder has to the Hurricanes.

The two forwards were not at the school at the same time, but still share a common bond. When Cross came on his recruiting trip, the coaching staff had him chat with Walker after practice.

“We were just talking about some things about Brewster because we can relate there and he was just telling me the differences at the next level,” Cross said. “He . . . [was saying that] it’s a different level and he needs to get used to it. He was just saying how good coach is and everything; he feels like he made a good choice. It was another player that I haven’t heard anything bad from, which you don’t hear a lot anymore.”

Another link between Cross and the Hurricanes is between he and his lead recruiter, associate head coach Chris Caputo.

Although Caputo hails from Elmhurst, N.Y., he spent his college years at Westfield State University, just 120 miles from Beverly.

“We actually knew a few of the same guys that he knows down here,” Cross shared. “So, when you have all these connections, it just makes it a lot easier and just makes it seem more right.”

Despite all their ties to Cross, the Hurricanes still faced stiff competition to land his signature. A consensus four-star recruit who places No. 85 nationally in the 247Sports Composite rankings, Cross also considered Butler, Florida, South Carolina and Texas A&M. 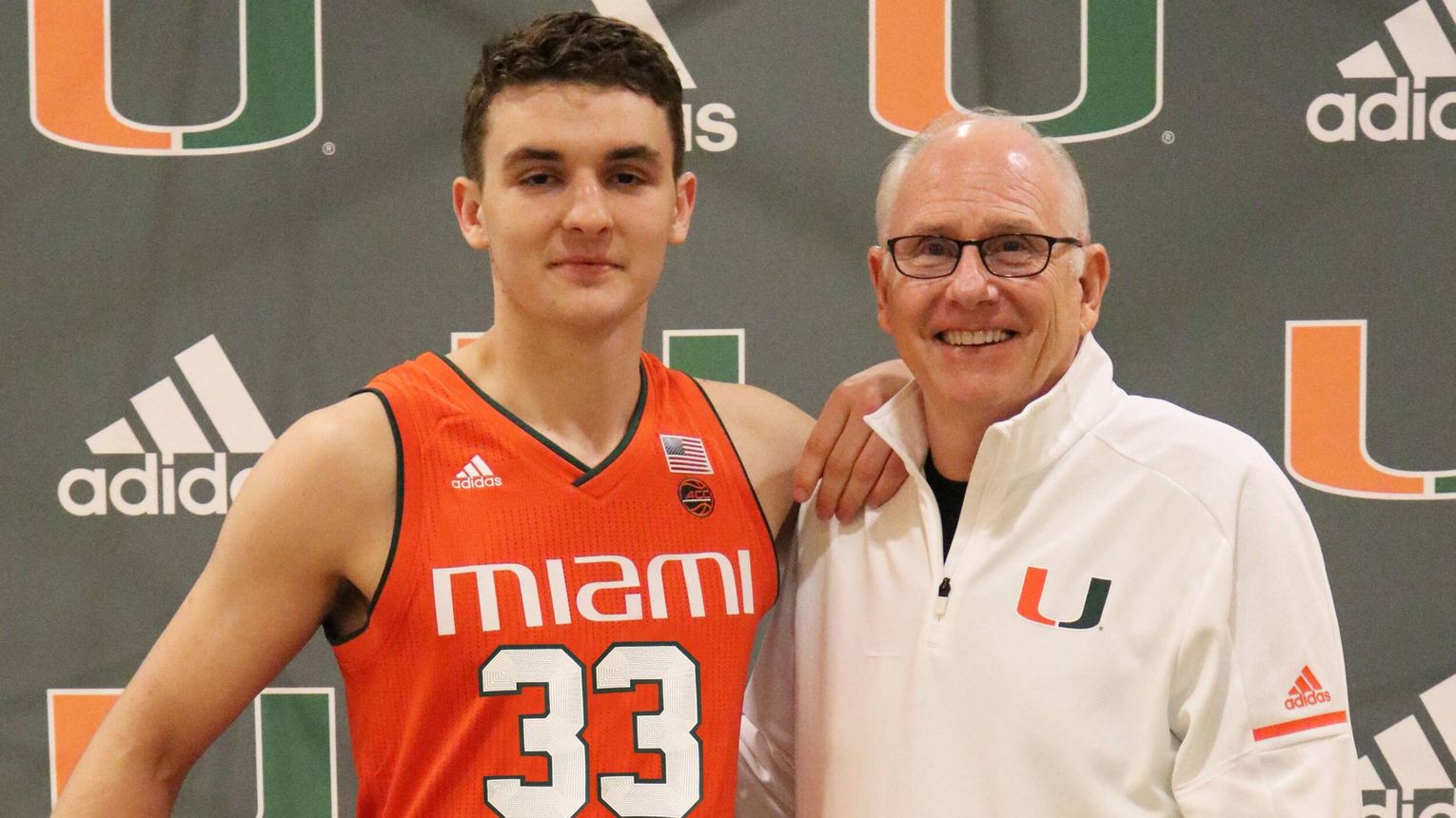 He heard many great things about Miami entering his official visit there, but was still not positive how it would play out once he arrived. Ultimately, what he experienced synced up with what others previously told him.

“When I went down, everything I saw and was hearing [was great], even just how the guys interact when I can see from a distance, when they’re not faking it,” Cross said. “I could just tell that it was the deal [maker] after I went there.”

In Cross, Miami is getting someone ESPN recruiting analyst Adam Finkelstein describes as “an ultra-tough competitor who loves contact, stretches the floor with his shooting range and has a great nose for the ball coming off the glass.”

Cross prides himself on that physical style of play. He feels, for anyone, toughness can makes you known on the hardwood and get in the head of an opponent.

Toughness, range from deep and a winning mentality…

That’s what @matthewcross35 is bringing down from Massachusetts to Miami. pic.twitter.com/aEr2DXuGen

Larrañaga is looking forward to bringing that type of player to the Watsco Center this fall.

“Matt’s not like the typical high school player who is real thin and needs to put on 25 pounds of muscle. He’s already thick and strong, and has the personality to use it regularly,” Larrañaga said. “So, in watching a game, when he was blocking someone out, you could tell that guy was going to be blocked out. If he got a rebound in traffic, you knew no one was going to take the ball off of him. He just seemed to have a really good physical presence.”

Beyond that, Cross displays an all-around game that allows him to play multiple positions. Larrañaga described him as someone who can play either forward spot offensively, while defending positions beyond that at the other end of the court.

In this era, versatility on the court is more important than ever and that is one of the calling card for Cross.

“Sometimes I’m used as a mismatch guy, depending if they’re going small,” Cross shared. “[If I] have a smaller guy on me, I can kind of take advantage of that down low [by using] my strength. Or if I have a taller guy on me, bring him out and be able to stretch the floor with my shot. I’d say my two best attributes are shooting and rebounding.”

During the 13-game regular season, Cross finished seventh in scoring (23.4) and sixth in rebounding (9.5) among players with at least five appearances. The only other players to place top-10 in both categories are quintet of lottery picks: DeAndre Ayton, Marvin Bagley III, RJ Barrett, Miles Bridges and Michael Porter, Jr.

“I think the EYBL compares to the ACC in the sense that the EYBL has the most NBA prospects [compared to] . . . any other AAU organization and the ACC has the most NBA prospects in college basketball,” Larrañaga said. “So, anybody that’s been able to succeed at a very high level in the EYBL should be able to make the jump to college basketball and, especially, the ACC without tremendous difficulty.”

Cross, who hopes to help the Hurricanes “get deep into March Madness” feels ball-handling and communication are areas he wants to improve.

"[If I] have a smaller guy on me, I can kind of take advantage of that down low [by using] my strength. Or if I have a taller guy on me, bring him out and be able to stretch the floor with my shot. I’d say my two best attributes are shooting and rebounding."

Nonetheless, Larrañaga sees Cross as someone who has what it takes to make an impact from day one in Coral Gables.

“I think he’s physically and mentally ready to compete at the college level. I think, like most freshmen, they’re going to have to learn a whole new style of play, new offense, new ways to play defense,” Larrañaga explained. “He’s got a good foundation because he played for Leo Papile [with] BABC, he played for Jason Smith at Brewster Academy. So, he’s got a very strong fundamental background, but there’s still a lot things freshmen have to learn before they’re totally comfortable and confident.”

Papile and Smith have already seen former players take their talents to Miami and now Cross is next in line.