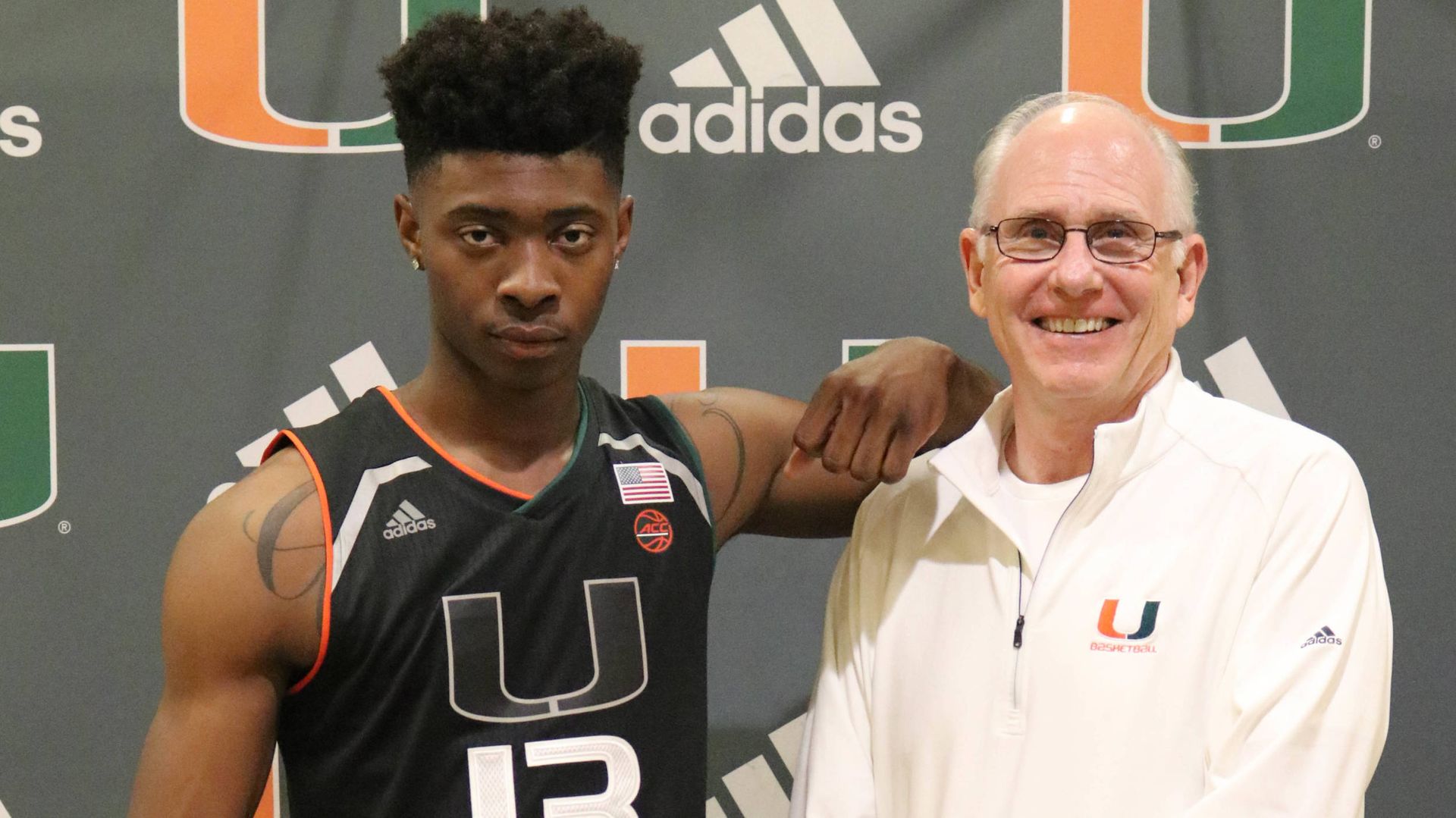 “In Love” with UM, Timberlake Readies to Win

CORAL GABLES, Fla. – Although not fully evident at the time, Sept. 13, 2019, proved to be a vastly important date in shaping the near future of the University of Miami men’s basketball program.

Timberlake, a 6-foot-6, 215-pound guard from Washington, D.C., readily admits that he did not head into that trip with particularly high expectations.

“Going into the visit, I just thought I was taking a visit just to go to Miami,” Timberlake shared. “I didn’t really think I was going to like it that much, as much as I did.”

Like many others, Timberlake thought Miami was a big-city school. Then, however, he arrived to see a gorgeous, suburban campus with countless palm trees, a charming lake and modern architecture.

Timberlake quickly “fell in love” with Miami, but it was not simply because of the campus. The DeMatha Catholic (Md.) High School star and his family felt a distinction connection with those inside the basketball program.

“It was a good vibe with the players and the coaches. Our dinner was all laughs and stuff,” Timberlake said. “I felt like I was at home. Coach L and my family [got along well and that is big] because if you impress my family, that’s saying a lot. So, he impressed them. He left [more of a] mark on them than the other coaches on my other visits.”

Head coach Jim Larrañaga seconded the importance of family in the recruiting process. It was clear just how much Timberlake’s family cared for him and wanted him to find the right fit.

Furthermore, the 2013 AP National Coach of the Year could sense that things were going well during the second weekend in September.

“His family invested . . . time and money into supporting Earl’s visits. So, they went on all the visits with Earl to evaluate each school thoroughly,” Larrañaga said. “While they were here, they spent a lot of time with me and my wife, and ended up realizing that the relationship that my coaches and I had with all the players was different than the other schools he was looking at.

“They really liked the atmosphere at dinner, the interaction that my coaches had with my players, the positive energy,” Larrañaga continued. “[They liked that there] was not a lot negativity, at all, in watching us practice. I think that became very significant to them.”

What they saw on the visit was backed up by what they heard from people who knew Larrañaga, a man with deep connections to the “DMV” area—District of Columbia, Maryland and Virginia—after spending 21 years across five decades as a coach in the Old Dominion State.

“Going into the visit, I just thought I was taking a visit just to go to Miami. I didn’t really think I was going to like it that much, as much as I did.”

One of those ties is currently at Miami in the form of standout guard Chris Lykes, who played in the same high school conference as Timberlake, as well as for the same AAU program.

“I had a relationship with him because he’s from this area,” Timberlake said. “He went to Gonzaga, I went to DeMatha. He played with Team Takeover; I was an eighth-grader when he was playing 17U. So, I knew him and that’s what made Miami a little more [like] home, knowing that there’s a guy from this area that goes there.”

While Lykes may have helped with the initial appeal, Larrañaga still believes others were key in confirming the authenticity of the visit.

“The idea that Earl felt comfortable because we had a player from his league that he came from was obviously important initially, but I think what became most important to Earl was that his family felt very, very comfortable with me and my staff because they knew a lot of people who had played for us at George Mason,” Larrañaga shared. “And they inquired through Chris Lykes’ parents and through several of our former players’ parents, and there was just a trust developed during the process that allowed us to feel like we had a very good shot at him.”

How Miami came to initially feel it could land a player of Timberlake’s impressive pedigree—something it has succeeded in doing quite a few times of late—is a bit of a different story, but one that also features relationship building and links to the nation’s capital.

“My assistant coaching staff is outstanding at identifying the very talented players, whether they are highly regarded nationally or not. And they are not only able to identify them, but get us involved with them and pursue them in such a way that we become one of the four or five that they want to seriously consider,” Larrañaga explained. “And Bill Courtney did that with Earl. He knew he was being very highly recruited, he knew he was going to have a lot of great choices, but he felt like Miami could be one of them. 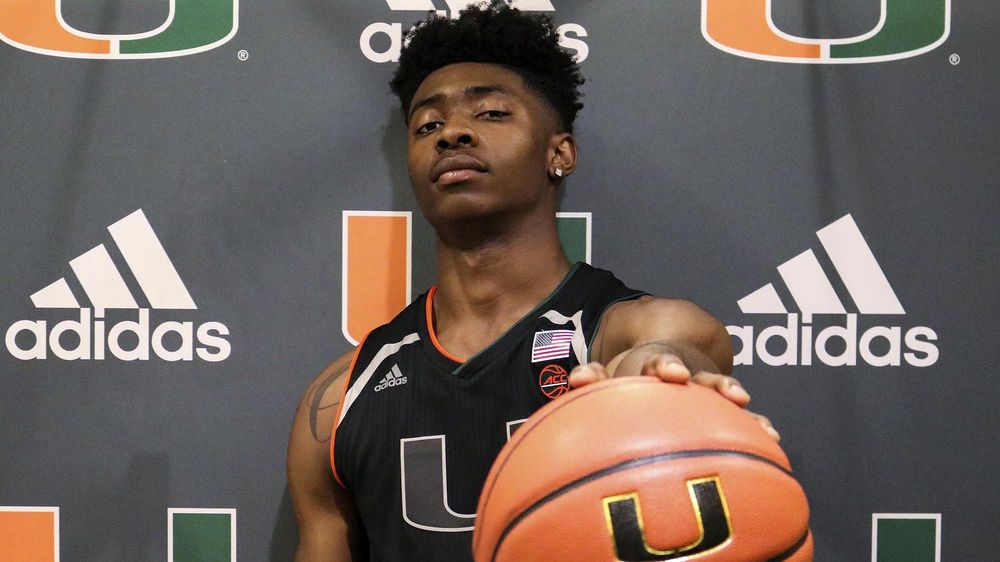 Timberlake, a consensus top-35 prospect, indeed had numerous schools recruiting him. Along with Miami, he took official visits to Pittsburgh, Providence, Seton Hall and South Carolina. Alabama and North Carolina were also in the mix.

Eventually, it became obvious to Timberlake that Miami was the place for him. In fact, he says he did not even have a runner-up, as Miami was so clearly the choice.

In November, under two months after visiting Coral Gables, Timberlake announced his verbal commitment to the Hurricanes. While his decision to then not sign a National Letter of Intent in the fall concerned some Miami fans at the time, Timberlake explained that was his plan no matter what school he picked.

Timberlake signed the first chance he had in the coronavirus-delayed late signing period, inking his paperwork exactly seven months after wrapping up his official visit to The U.

In addition to pushing back his signing two weeks, the COVID-19 pandemic has also extended Timberlake’s wait to enroll at Miami.

Once he is permitted to matriculate to Coral Gables, Timberlake will bring a well-rounded game to his new team.

“I’m going to go hard. I leave it all on the court,” Timberlake said. “I can pretty much do everything on the court. I can guard the best player, I can score, I can rebound, I can pass. I can do anything my coach needs me to do to win.”

While he knows he needs to work on his jump-shot, Timberlake says he has been doing just that and feels it coming along nicely.

Regardless of what he does offensively, it is Timberlake’s defense that has been a calling card for him ever since he started playing basketball. In fact, unlike many, the 2019-20 The Washington Post First Team All-Met selection prefers the defensive side of the ball.

“When I really first started taking basketball seriously, that’s all I did was play defense. I didn’t really have much of a skill set, so I guess that kind of like stuck with me through now,” Timberlake said. “So I just play as hard as I can on defense. Defense wins basketball games. I hate getting scored on. There’s something about getting scored on that makes me fired up.”

That passion for defense is something Larrañaga saw in Timberlake when evaluating him and he elaborated on what he feels makes the Miami signee so prolific at that end of the floor.

“Well, the game is physical, mental, emotional and spiritual. Earl has all the physical qualities: size, strength, speed, quickness, jumping ability. In addition, he has all of the mental [attributes], which is the determination that ‘I am going to play, I am going to stop my man,’” Larrañaga said. “And then, most importantly, he has the emotional mindset that ‘I’m going to fight to the bitter end.’ And there’s an anger about, ‘If you score on me, that’s just going to make me more determined to stop you the next time.’

“And then the spiritual is, he’s very team-oriented. He’s got that team spirit that he doesn’t want to let anybody down. So, he knows he’s always going to be given a tough assignment, a tough guy to match up with and he’s going to want to win that matchup to help his team win.”

Although his defense may be a prime component of what makes Timberlake such an elite recruit, his mindset is another.

In fact, when asked what initially stood out to him when watching Timberlake play, Larrañaga mentions very little of his impressive physical tools.

“Well, the very first thing was his competitiveness. He attacks the game of basketball at both ends of the court,” Larrañaga said. “He defends with a relentless toughness and he attacks the basket with speed, quickness, strength and clear determination that he’s not going to be stopped.”

That assessment is backed up by Eric Bossi, the national basketball analyst for Rivals, which ranks Timberlake No. 31 overall prospect in the country, tops among four-star recruits.

“Earl Timberlake is one of the toughest and most versatile wing players in the class of 2020,” Bossi said. “He is a skilled competitor who never backs down from a challenge. He has been well prepared in high school and on the grassroots circuit to be an impact player in the ACC.”

Like Bossi, Larrañaga also feels that Timberlake will be able to aid the Hurricanes right from the start of the upcoming campaign.

It is not just on defense or with intensity, though, where the two-time ACC Coach of the Year feels Timberlake can help Miami from the jump.

If all of the explanations of Timberlake’s game make one think of another multi-dimensional wing playing in Miami, it would indeed make sense.

The scouts love what @easyyyooo is bringing down to The U. pic.twitter.com/CYmoScVIfI

“This year, people have been comparing my game to a little bit of a Jimmy Butler,” Timberlake said. “So, I watch him and I watch a lot of [Russell] Westbrook [since he is] my favorite player, the way he plays hard, takes no plays off.”

Larrañaga feels the comparison of Timberlake, who lists James Harden and Kawhi Leonard as his other favorite players, to Butler is an apt one.

“I think that’s a tremendous comparison because not only are they the same height and the same build [with] the same competitive spirit, but they also have that hard edge to them,” Larrañaga explained. “They don’t back down from anybody and that they’re all about playing hard and winning.”

Indeed, winning is of the utmost importance to Timberlake. He is not focused on his stature as a top recruit or what will come after college.

He simply wants to win.

“I don’t really think about [any individual goals]. I just want to win as many games at Miami [as I can] and get us back on track,” Timberlake said. “Anything I achieve, it’s just a blessing.”

There is no doubt the Hurricanes’ chances of winning games in 2020-21 are set to increase with the addition of Timberlake.

Both the Miami staff and Timberlake himself have a September visit to thank for pairing the two together and making that possible.