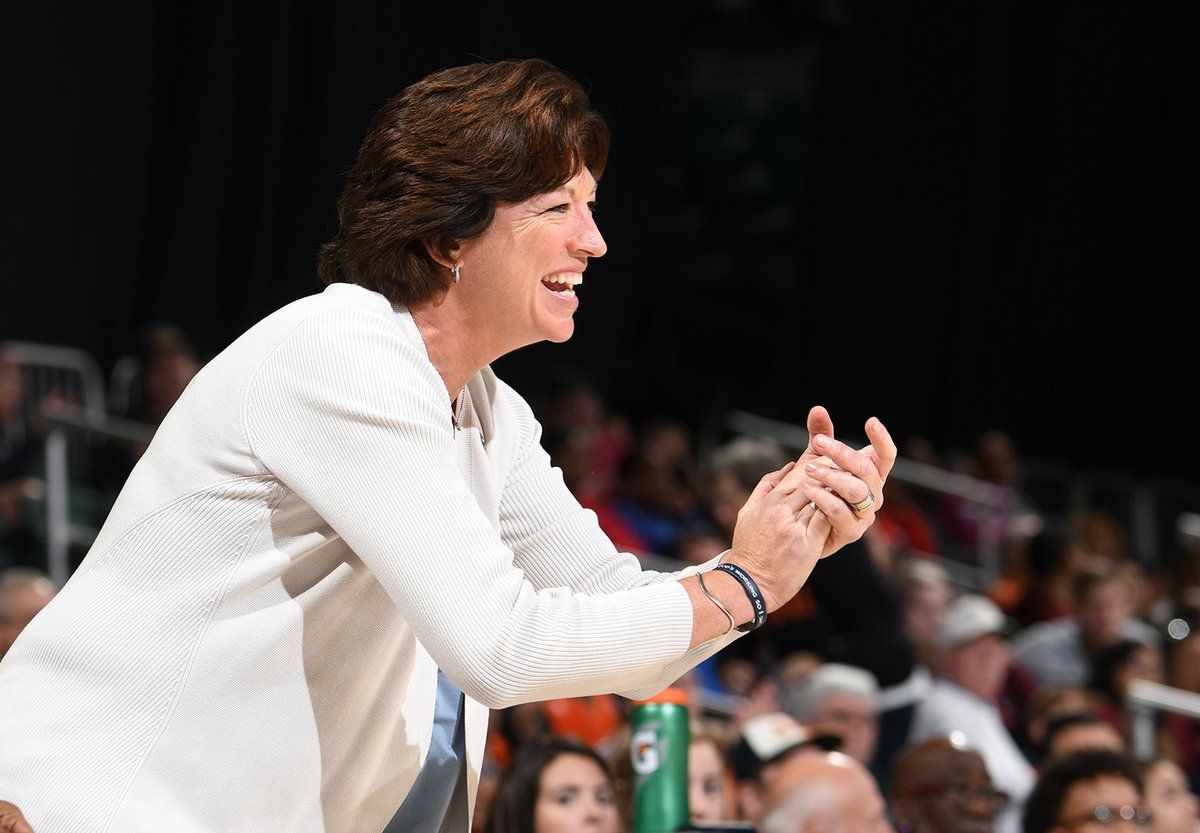 Hailing from a small town in northeast Illinois approximately 25 miles west of Chicago, with a population of less than 55 thousand, Katie Meier is one of many impressive names in a long list of accomplished individuals that were either born, or lived in and went to school in Wheaton,  Illinois.  Katie, however, is the only one that can say she has the best jump shot out of all of them.  Only Randy Pfund – former Miami Heat General Manger and former Los Angeles Lakers assistant coach with ties to Wheaton by way of Wheaton College, may have something to say about that, maybe. 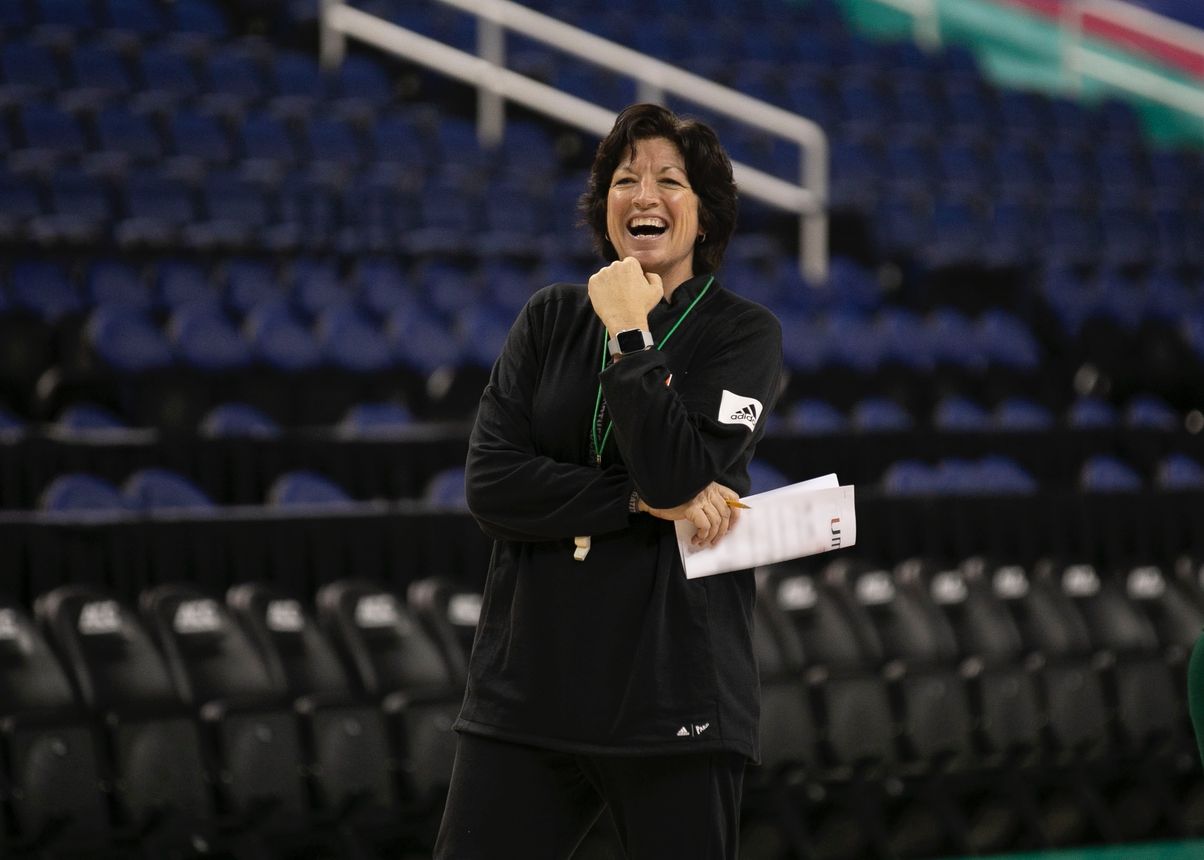 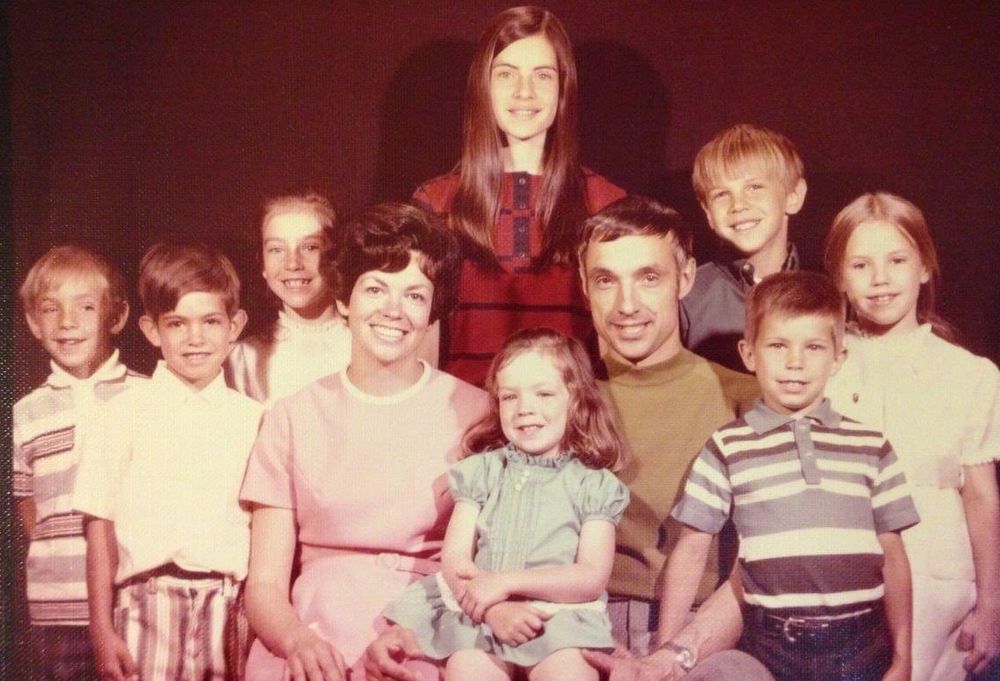 Born Kathleen, Katie has that “what you see is what you get” type of demeanor.

That demeanor is what helped her claw and fight her way to push barriers and play little league basketball as an eight-year-old when girls were not allowed to play at the time.  That demeanor is part of what drove her to beat all the boys in her neighborhood on the hoop in her front yard and at school.  That demeanor comes from growing up in a loud, chaotic, yet loving home on Elm Street, while learning to have tons of energy because she was the baby growing up as the youngest of eight in a blended family.  That demeanor comes from never having met her biological father, as he perished in a plane accident when her mother Phyllis was pregnant with her.

Those are some experiences that are at the foundation of the woman she is today.  When coach Meier speaks, everyone listens.  And being raised in that home on Elm Street also taught her how to have a voice, because in that home you either did, or you did not. 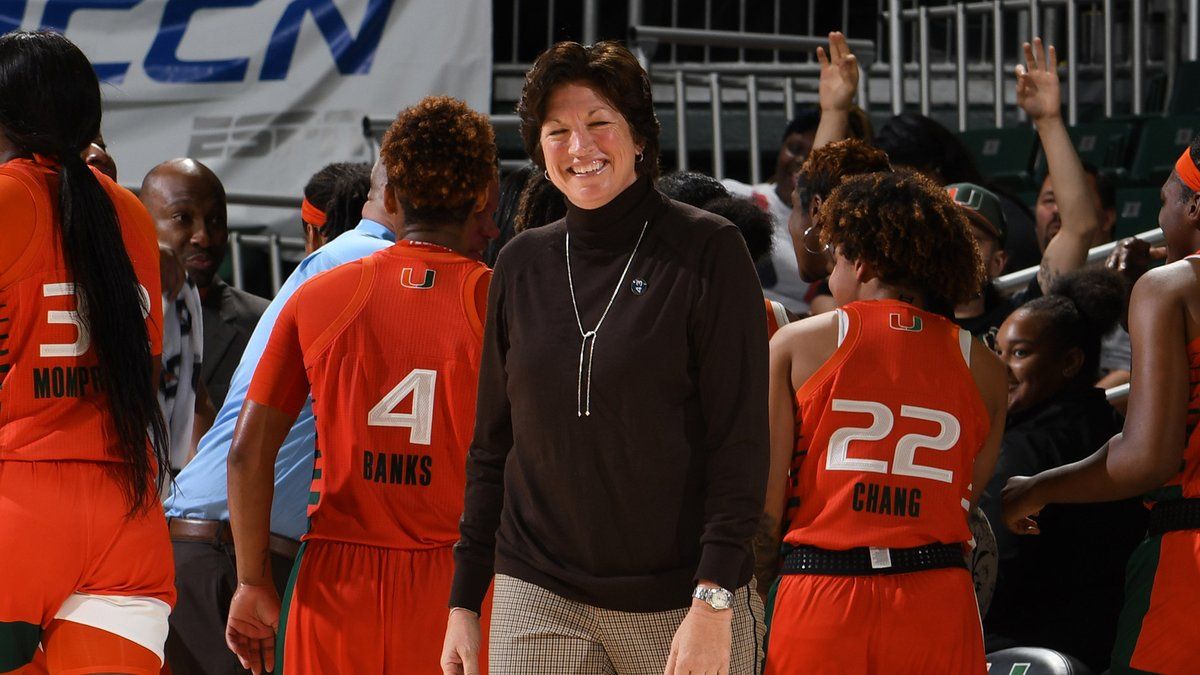 Meier does not think twice about establishing herself when she knows she belongs in a certain environment.  She proved this when earning her respect on the basketball court as a young girl, but she also has a hankering for passing that same mindset down to her players.

When speaking on what it takes to be a leader of young women as the head coach of women’s basketball at the University of Miami, there was no secret sauce or hidden formula for how she gets through to her players.  She had five freshman this past season and whenever she heard any of them use the excuse about just being a freshman on the team, coach Meier’s response simply was “So what, they’re THREE years older than you!”  Her mentality is simple:

Coach Meier has always been a go-getter that fought to get what she felt was hers – not in a literal sense.  “I was respectful, I was polite.  But if, you know, something was going down and I had a different opinion or whatever, I didn’t just do it.  I still had a voice; I was polite about it, but I knew what I thought was right.”

Katie is a well-rounded, calculated individual that is continuously generating as many opportunities as she can, in any situation she is in.  No matter what the circumstance, she is constantly trying to make the best of the moment, and she is also a great quote.  Since she has a penchant for being quotable, it was interesting to gain her perspective about a well-known Will Smith quote that reads “You should never have a plan B because it distracts from plan A”, Meier responded in typical, matter of fact, Katie fashion, “I completely disagree with that actually.  I really do.” 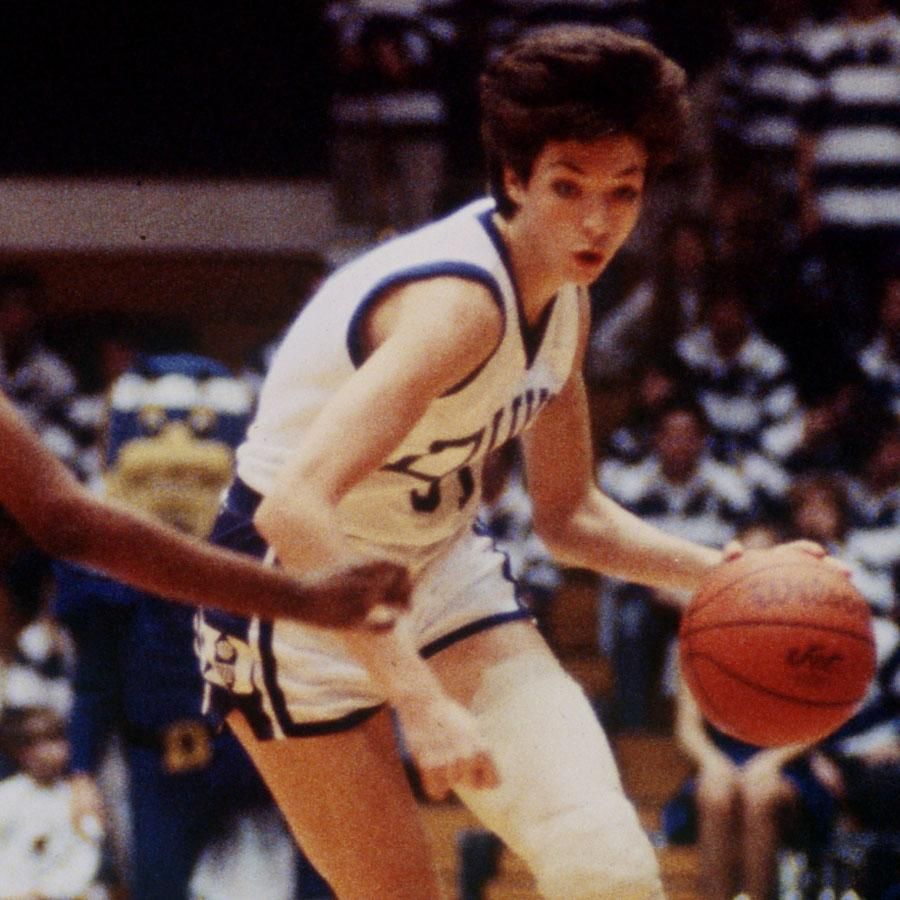 She loved the game of basketball but did not always have being a head basketball coach at the top of her list.  As it turns out, she was awarded an athletic scholarship to play basketball at Duke University and earned her degree in English.  Inspired by a female teacher at the ripe young age of eight years old, she knew that teaching was something she really wanted to pursue.  Always taking advantage of any given moment, different opportunities arose at Duke and Meier earned her Master’s in Teaching after a knee injury sidelined her for 16 months.  Meier also decided to forego law school at Duke even though she had the chance to attend.

She went on to explain how having a single plan A to focus on, was not necessarily conceivable for her because growing up, there was no such thing as woman earning a scholarship to go play division one basketball and have school paid for.  “There was plan zero.”  Making sure to not be misquoted because it has happened plenty regarding the subject of setting goals, she elaborated further by saying she absolutely sets them, but for a female growing up in the era she did, she HAD to have more than one plan and sticking to just a plan A may not have resulted in the best of decisions.

Her plan A was to become a teacher, and she would eventually do so in Belgium after playing overseas, learning the language, and teaching English for a year. But if she stuck to only having one plan, setting one goal, or not having a plan B how the quote says one should not do, then she would have missed out on several life experiences that helped shape her be the person she is today.

Basketball was one of those life experiences that if she decided to stick with one plan, would have perhaps prevented her from becoming one of Duke’s all-time best players, playing overseas, establishing relationships with the likes of Jay Bilas, Mark Alarie, Tommy Amaker, Billy King, Danny Ferry, Quinn Snyder, Mike Krzyzewski, Lisa Stockton, etc. and becoming one of the most respected head coaches in women’s college basketball.

In four years at Duke, Katie compiled some eye-popping stats that rank among the best in program history.  She ranks fifth in points in a game (36), is tied for third all-time in field goals made (15), tied for seventh in assists (12), ranks sixth in steals with eight (twice), and recorded a 16-11-10 triple double – only one of eight in school history.

Her freshman season was mentioned by former ACC rival and longtime friend Lisa Stockton.  Stockton, currently serving as head coach of women’s basketball at Tulane University confirmed Meier’s presence on the hardwood by describing her as a long, lanky, and tall guard – at the time, a six-foot guard was not the norm.  “She was a really good freshman” said Stockton who was a senior at Wake Forest while Meier played her first year at Duke.  The two cultivated what has turned out to be wonderful friendship after Meier, who was Stockton’s very first hire, was named assistant coach at Tulane.

From wine country, to the Florida Keys, Miami, New Orleans, and countless other vacation destinations, the two are part of a group of friends that stay in touch and travel when they can.  The coaching tandem of Stockton and Meier catapulted the Green Wave to its highest ranking in school history (13) and helped accumulate an overall record of 164-52, including a seven-year run in the NCAA tournament. 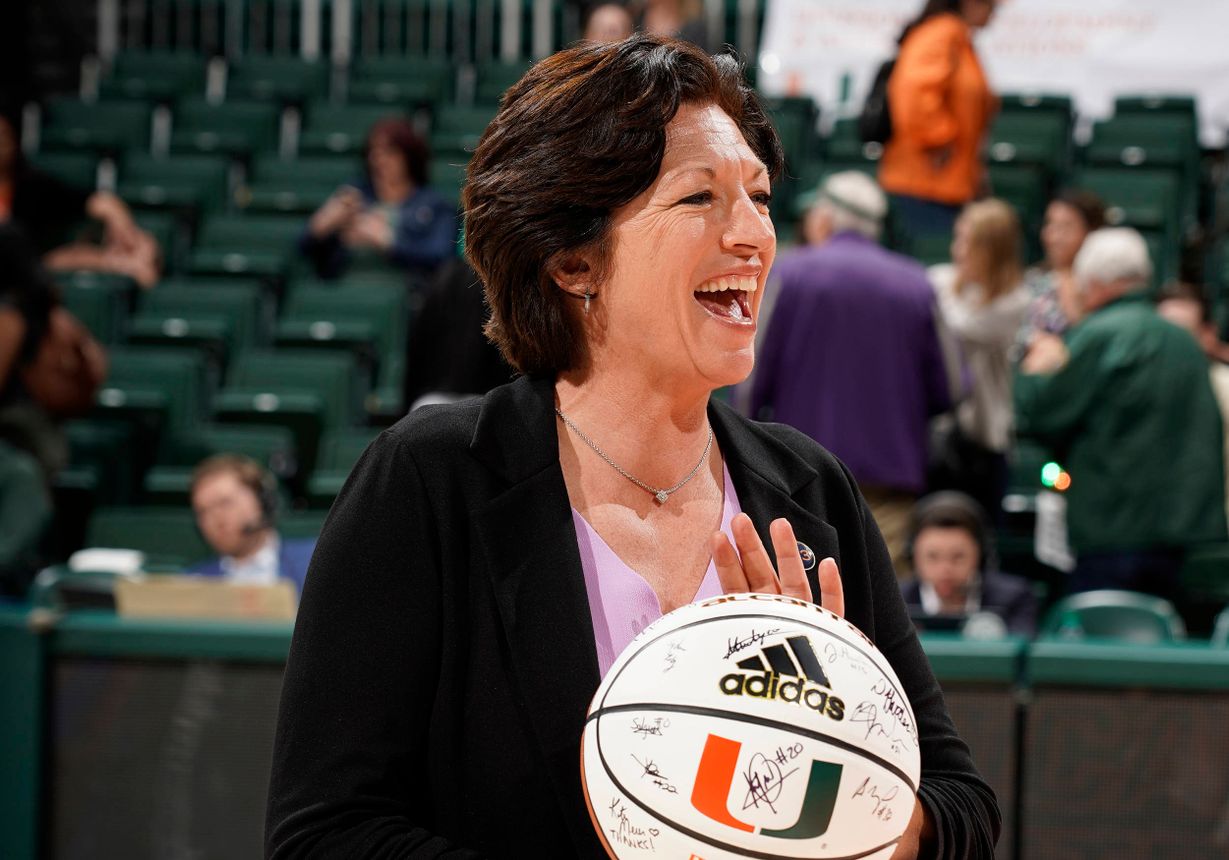 When questioned about Meier’s competitive fire, Stockton shared a comical story.  It was gameday morning for the Tulane women’s team and the school was about to tipoff an alumni basketball game.  There were not enough alumni to play the game so both ladies decided to lace up and play.  Anyone that knows Meier knows she goes hard for anything she is involved in, this game was no different.  Just because this was an exhibition match did not mean it was to be taken lightly or not play hard.

During the game, Meier turned her ankle badly yet continued to play.  The injury was so severe that at one point, she turned to Stockton and said, “I’m really hurt.”  However, this still did not stop Meier from playing, at least not until she was convinced to stop and have her ankle treated.  Coach Stockton could not recall if they won the game, but she was able to confirm that Katie did in fact coach in the women’s game later that day – on crutches.  There has not been an alumni game since.

Meier’s competitive spirit did not always come across as fierce and fiery – sometimes cooler heads prevailed but the goal was the same, get what you deserve.  As is the case with most young basketball players, her affinity for sneakers was as important as anything else.  You played how you looked, and if you looked good, you just might have played that way.

While she recounted her story about how she just had to have a pair of Adidas Top 10’s she saw one day with her high school friend Steve, Meier’s innate ability to work for and get what she wanted all came together.  She detailed going to Sport Mart in Chicago and her friend was hinting about how likely she was to earn a basketball scholarship.  When they saw the sneakers, he urged her to call her parents and ask if they would buy them being that they were on sale for $88.  Meier smooth talked her way into getting them, saying she would pay her father back.  Years later, with sneaker prices astronomically higher than what they were in the 1980’s it’s safe to say that the debt has been repaid.

As a teacher, mentor, coach, friend, daughter, fighter, and lifelong learner, Katie Meier has forged her path to where she is today.  From being that young girl that was beating the best boy basketball players in the neighborhood, to making sure her voice was heard in a rambunctious yet loving home, being an accomplished college basketball coach, model citizen, and dependable mother figure of young women that trust her with precious years of their young lives, the University of Miami should be elated that it has a one of a kind personality in Katie Meier as head coach for women’s basketball, and even more elated that she does believe in plan B’s, even if they involve coaching in crutches.