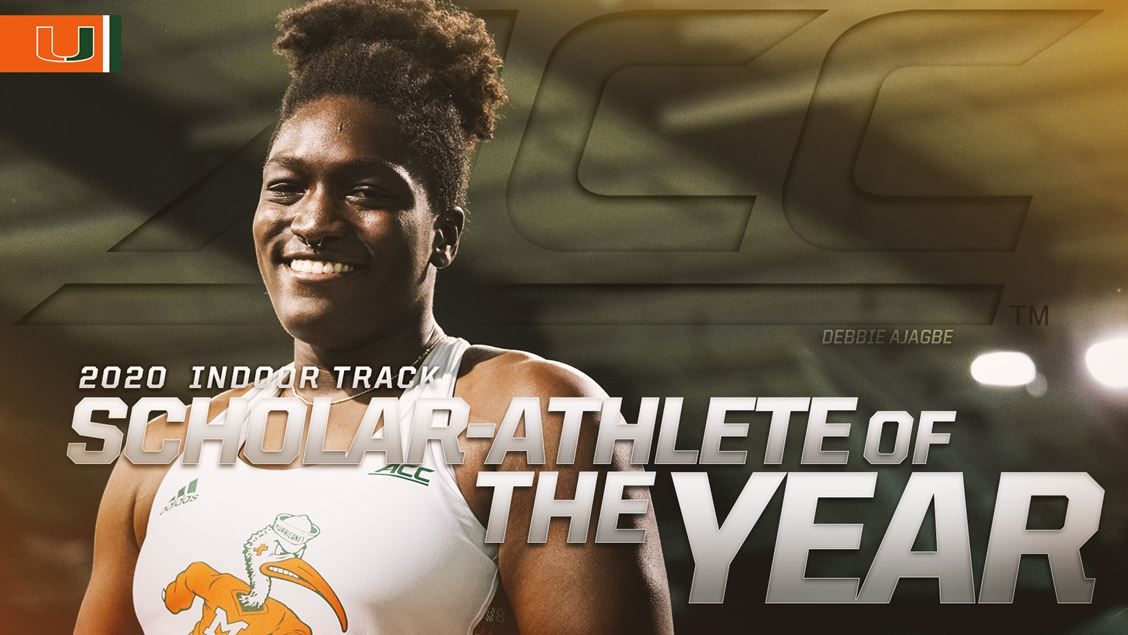 CORAL GABLES, Fla. – Debbie Ajagbe was named the 2020 ACC Indoor Track Scholar-Athlete of the Year, while five other Miami women joined her on the All-ACC Academic Team for Indoor Track & Field as announced by the conference Friday morning.

The ACC Scholar-Athlete of the Year awards were established in September of 2007 to be awarded annually to the top junior or senior student-athlete in their respective sports. Candidates for the awards must have maintained a 3.0 grade point average for their careers, as well as a 3.0 for each of the last two semesters.

Ellis, earning her masters in Health Informatics, maintained a 4.0 during graduate school. The Gurnee, Ill., native is a five-time ACC Honor Roll member, has been named to the Provost’s list four times, Dean’s List eight times and is a ODK National Honor Society member. Ellis finished the season with a second place finish in the 400 meter dash at the conference championships and set season-best times in her final four races as a Cane.

Lubin finished her career as a Hurricane with her top finish at a conference meet, posting a personal-best throw in the shot put at 16.15 meters that ranks fifth in Miami history. Lubin has now been named to the ACC Academic Honor Roll twice, Dean’s List once, and was Book Buster Club member six times in her collegiate career.

Patterson concluded her junior season reaching the 60m final at the ACC Championships after a personal-best time of 6.35 in the prelims. The Haines City, Fla., native finished sixth overall in the final with a time of 7.46 seconds. Patterson has been named to the conference Honor Roll twice, the Dean’s List once, listed on the AD’s Honor Roll and Book Buster Club this year.

A freshman who made a name for herself scoring 17 points at the conference meet, Sears continues to shine both on and off the track. The Palm Beach Gardens, Fla., native set a new personal-best time in the 60-meter dash with a time of 7.25 seconds, which is tied for the third-fastest time in Miami history. Just minutes later, she produced another podium-level performance, finishing third in the 200 meters with a time of 23.68 seconds, the fifth-fastest time in program history. Sears is also a member of the Book Buster Club.

Steele, a graduate student studying Liberal Studies, recorded a fourth-place finish in the women’s 60-meter dash at the ACC Indoor Championships with her time of 7.28 seconds. With a 3.35 overall GPA, Steele is a two-time ACC Honor Roll and AD’s Honor Roll member and has earned Book Buster Club honors five times in her career.