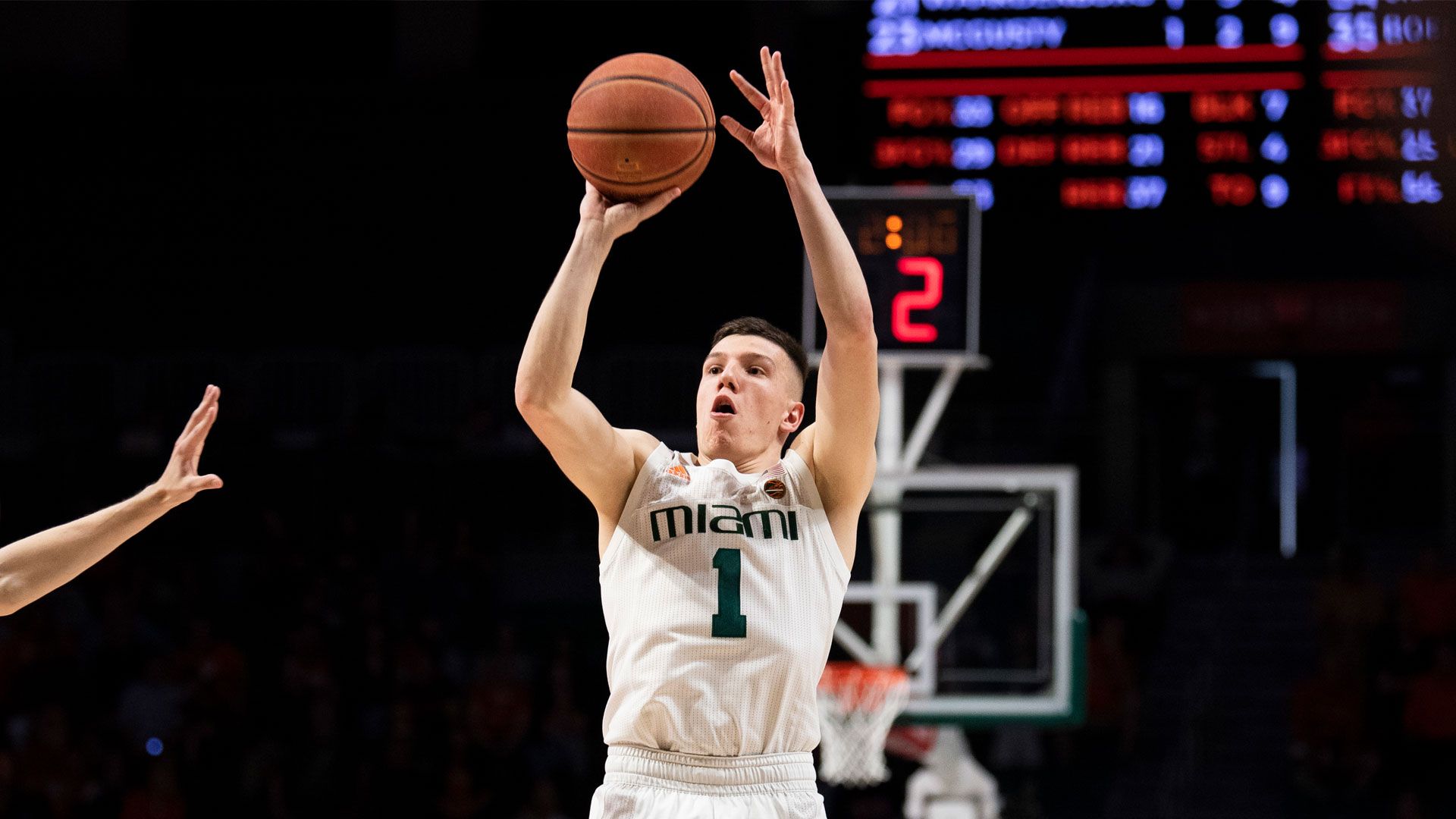 Freshman guard Isaiah Wong scored a game-high 18 points to pace the Hurricanes, who picked up a rousing victory in their final game of the 2019-20 regular season.

“One of the things that happens in these close games is players need to step up and make big plays. DJ [Vasiljevic] did, Isaiah Wong did and Kam McGusty did,” Miami head coach Jim Larrañaga said. “I thought Keith Stone’s defense and rebounding were a huge key. Isaiah Wong had nine rebounds, so that obviously was very, very important. The defense—we were able to really guard their 3-point shooters very well, which was a real stumbling block early in the season.”

After missing 11 of its first 12 3-pointers, Syracuse made one seconds before the first-half buzzer to trim its deficit to two, 26-24, at the intermission. Miami (15-15, 7-13 ACC) posted a nearly identical mark from beyond the mark in the first half, finishing 2-of-12.

Syracuse stretched its edge to six, 39-33, with 9:22 to go, but senior guard Dejan Vasiljevic, in his final home game, hit back-to-back 3-pointers to tie the score with 7:27 on the clock.

The Hurricanes went on to take a four-point lead, 56-52, with 16 ticks remaining, but Syracuse freshman guard Joseph Girard III closed on a personal 4-0 run in the final 11 seconds to force overtime.

Miami took control early in the extra session, as Wong hit a 3-pointer to make it 63-58 with 3:29 to play. Syracuse closed back within three, but redshirt senior forward Keith Stone, also in his last game at the Watsco Center, upped the edge back to five on a fast-break dunk with 28 ticks remaining.

The Orange closed back within two with 10 seconds left, but Miami made all four of its free throws the rest of the way to seal its third overtime triumph of 2019-20.

Wong added nine rebounds and a career-high four assists to go along with his game-leading point total. Vasiljevic finished with 17 points and connected on five 3-pointers, his third time reaching that number this season.

McGusty totaled 13 points in the win, while Stone dished out a game-high six assists to double his prior career high. As a team, Miami finished with 18 assists on the night to set a season best.

Junior forward Marek Dolezaj led the Orange with 17 points, while Girard posted 13 and sophomore guard Buddy Boeheim added 12. Junior forward Bourama Sidibe paced all players with 10 rebounds before becoming the first Miami foe in 2019-20 to foul out, doing so with 16 seconds left in regulation.

The teams led for nearly identical amounts of time, with the Hurricanes ahead for 18:50 and Syracuse in front for 18:18. The game featured 10 ties and seven lead changes.

Miami will now head to Greensboro, N.C., for the ACC Tournament. It is the No. 9 seed and will begin play Wednesday at noon against eighth-seeded Clemson at the Greensboro Coliseum, live on ESPN.

MIAMI HURRICANES POSTGAME NOTES
– The Hurricanes moved to 9-19 all-time against Syracuse, including 5-10 at home and 4-5 in Larrañaga’s tenure.
– Larrañaga, who entered the game with the 10th-most victories of any active Division I coach, is now 660-446 in 36 years as a head coach, including 190-112 in nine seasons at Miami.
– The Hurricanes are now 11-9 in overtime games under Coach L, including 8-5 in ACC play and 3-1 this season.
– With 190 victories as an ACC coach, Coach L tied Paul Hewitt for No. 19 on the conference’s all-time leaderboard.
– For the first time this season, Miami used a starting lineup of McGusty, Vasiljevic, Stone, Wong and redshirt junior center Rodney Miller, Jr.
– As announced prior to tip-off, Lykes is out indefinitely due to face injuries sustained in Wednesday’s game against No. 22 Virginia.
– Before the game, Miami recognized its two seniors, Stone and Vasiljevic, as well as a trio of managers: Roy Casanova, Jacob Klee and Max Wiviott.
– Miami is now 15-0 when leading or tied at halftime and 0-15 when trailing through 20 minutes this season.
– The entire game was played within a 12-point window, as both teams’ biggest lead of the night was six points.
– This is the 10th time in 2019-20 that Miami has allowed a sub-40 percent field goal clip and it is 8-2 in those games, including 5-2 in ACC action.
– Saturday was the eighth time this season the Hurricanes shot under 40 percent and the first time they won when doing so.
– With five made 3-pointers in the game, Vasiljevic now has 269 in his career, passing Virginia Tech’s Malcolm Delaney (264), Duke’s Bobby Hurley (264), North Carolina’s Joel Berry II (266), Virginia Tech’s AD Vassallo (267) and Duke’s Kyler Singler (267) for sole possession of No. 17 on the ACC’s all-time list.
– In addition, Vasiljevic passed Steven Edwards for second place on the Hurricanes’ career leaderboard.
– Vasiljevic, who made his 75th start and  surpass150 free-throw attempts at Miami, registered his 64th double-digit point total and became the 21st Hurricane to tally 1,250 points.
– Wong tallied double-figure points for the 10th time, all of which have come in the last 12 games.
– McGusty notched his 48th double-digit scoring performance.
– Waardenburg, who moved past 50 blocked shots as a Hurricane, tied his career high with three blocks and set a new top mark in ACC play.