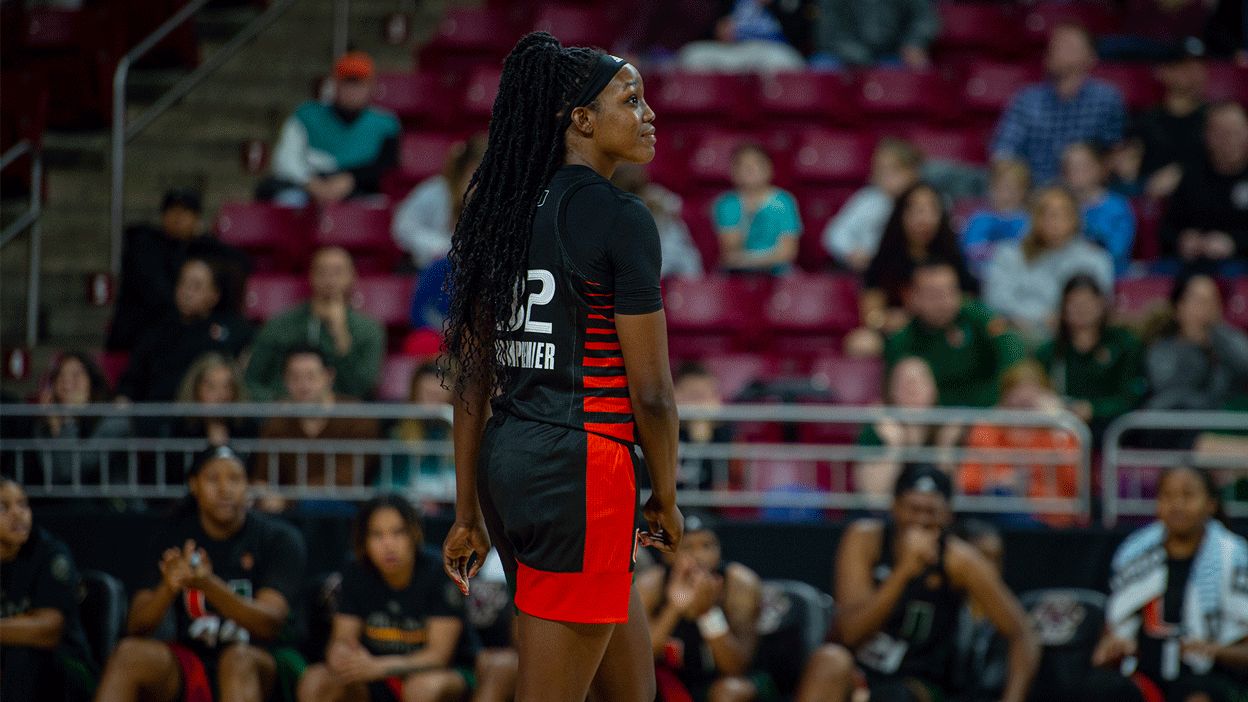 CORAL GABLES, Fla. – The expectations, both for her and the Hurricanes, were sky-high.

Beatrice Mompremier was tabbed the ACC Preseason Player of the Year. Miami took the court in November for its opener against Jackson State ranked in the top 20 of both major polls.

There was, in Coral Gables and across women’s college basketball, the sense that the Hurricanes would, more than likely, be an NCAA Tournament team for the sixth straight year.

Mompremier suffered an acute foot injury that would, it turned out, sideline her for weeks. And with their top player and one of their leaders unable to do little more than watch and cheer her teammates on from the bench, the Hurricanes struggled.

A series of losses knocked Miami out of the polls. A disappointed Mompremier tried to work through the recovery and rehabilitation process as quickly as possible, but Miami’s athletic trainers, team doctors and Hurricanes coach Katie Meier were adamant: the forward would not return to action until she was truly ready.

Mompremier, finally, is back.

The redshirt senior returned to the Miami lineup on Sunday when the Hurricanes traveled to Boston College and wasted little time in making an impact.

Though she played just 17 minutes in the loss to the Eagles, Mompremier scored 15 points and pulled down six rebounds. While she may have battled through some pre-game nerves, there’s no doubt she was ready to do what she could to help the Hurricanes.

“It felt good. I had jitters because I hadn’t played in 10-plus games, but just coming out there to try and help my team was exciting for me,” Mompremier said. “My first basket, I was like, ‘Maybe I’ve still got it. Maybe I’ve got it back.’ I was happy. But then I remembered I had to get back on defense.”

The hope now is that Mompremier and the Hurricanes can build on this first game back, especially with Miami set to play its final two regular-season games this week before turning its focus to the ACC Tournament.

Despite playing in just 13 of the Hurricanes’ 26 games before her injury, Mompremier still entered Sunday’s game as Miami’s leading scorer, averaging 16.3 points and 10.4 rebounds.

And though she missed a large stretch of the season, she’s still regarded one of the top players in the country, earning recognition in early February as one of the 10 finalists for the Lisa Leslie Award, which is given annually to the nation’s top center.

Mompremier’s teammates and coaches expect as she continues feeling more comfortable, she’ll play with a newfound determination. That will only pay off for her – and the Hurricanes.

“A beast. She’ll be a beast,” Meier said of what she expects to see from the Miami star in the final weeks of the season. “Bea is a tough, tough competitor and she’s been frustrated. She’s been trying. She’s been rehabbing. She’s done everything. If Bea has a chance to compete, she’s going to compete, to the fullest. I think there’s a beast that’s going to emerge.”

Added Hurricanes guard Mykea Gray, “Spirits will definitely come alive having Beatrice back. She’s an amazing player to play with. … And we all want Beatrice back with us. She’s an important part of our team.”

As happy as the Hurricanes are to have her back, though, no one is happier than Mompremier herself, who, until this year, had never dealt with a serious in-season injury.

Initially, she hoped her absence would be a short one. But as weeks went on and decisions had to be made about her recovery and rehabilitation process, she found herself fighting feelings of frustration.

It was then Mompremier’s support system came through to try and lift her spirits.

Conversations with Meier – who dealt with a serious injury during her own college career at Duke – helped. So, too, did the opportunity to disconnect a bit and spend time with both her brother and her high school basketball coach.

“It’s meant everything to me, just being back home with my family and friends,” said Mompremier, who transferred to Miami in 2017 after spending two seasons at Baylor. “Everyone gets to come and see me. I’m not really far from everybody. … I’m glad I came home. My high school coach, we’re really close. When I’m down on myself, or if I have a bad game, he’s always there for me. My brother, also. Just being around him is what guides me every day to be the person that I am today.”

While she knows her career at Miami is winding down and her redshirt senior season hasn’t exactly gone the way she’d hoped, Mompremier is determined to make the best of what’s left.

And though the tournament odds may be stacked against her team given its tough losses, she says that with everyone on the roster finally feeling healthy, the Hurricanes are far from finished.

“All the pieces are together now. We went through a long season of ups and downs, but with everyone healthy in the beginning of the season, we showed pretty much what we have,” Mompremier said. “So I think the ACC Tournament, we could have a long run there and show what we’re capable of. … My goal now for the rest of the season is to help my team as best I can. … Whatever I can do to help, I’ll do.”