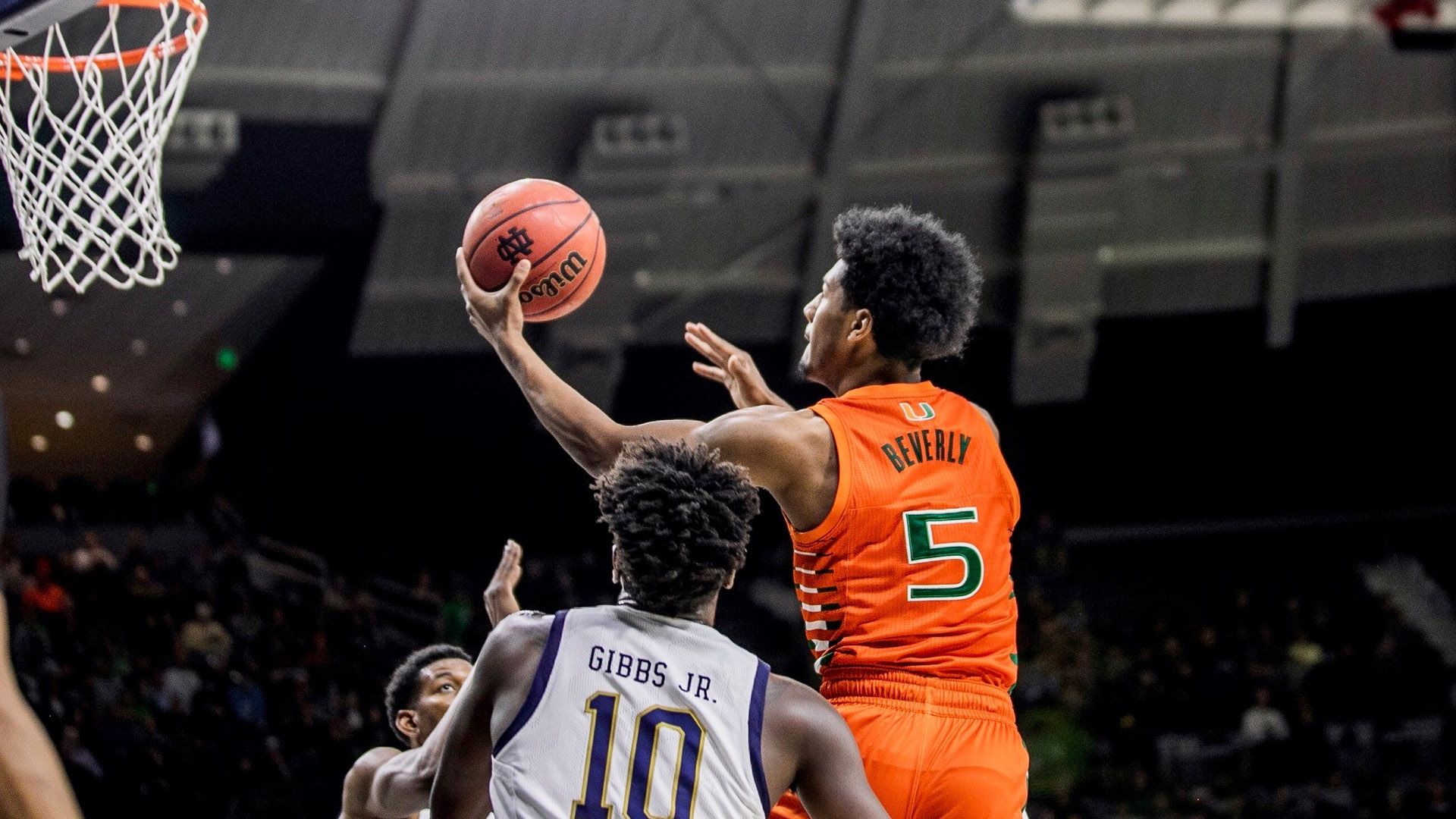 Three players scored 12 points apiece for the Hurricanes, who were unable to overcome the Fighting Irish’s blistering long-range shooting.

“Well, I thought Notre Dame did a great job of sharing the ball, getting assists, making threes—and we had a very hard time, as they have so many 3-point shooters,” Miami head coach Jim Larrañaga said. “When you have that many weapons, if one guy lets up, they are going to find that open man and he is going to make that shot.”

After the Fighting Irish missed 15 of their first 20 shots, they connected on nine of their next 13—including hitting six straight 3-point attempts—to take a 14-point lead, 39-25, with 3:37 left in the opening half.

“Giving up 10 threes is more than we wanted to give up in the game and they already had it at halftime,” Larrañaga said.

The Hurricanes, who won the first triple-overtime game in program history Wednesday night at Virginia Tech, were unable to cut the deficit any lower than 14 in the second half and saw their three-game winning streak come to an end.

Senior guard TJ Gibbs and senior forward John Mooney co-led all scorers with 19 points apiece for the Fighting Irish. Gibbs shot 7-of-10 from the floor, including 5-of-6 on 3-pointers, while Mooney grabbed a game-high 12 rebounds.

The Fighting Irish made half of their first 28 shots from deep before finishing 14-of-31 (45.2 percent) beyond the arc. That set a new top tally for made 3-pointers in a game by a Miami foe this season.

The Hurricanes now have a midweek bye before heading to Atlanta, where it meets Georgia Tech Feb. 29 at 8 p.m., live on ACC Network from McCamish Pavilion.

MIAMI HURRICANES POSTGAME NOTES
– The Hurricanes moved to 12-12 all-time against Notre Dame, including 5-6 on the road and 5-4 in Larrañaga’s tenure.
– Larrañaga, who entered the game with the 10th-most victories of any active Division I coach, is now 659-444 in 36 years as a head coach, including 189-110 in nine seasons at Miami.
– For the third time this season, Miami used a starting lineup of Stone, Vasiljevic, Wong, junior guard Chris Lykes and redshirt junior center Rodney Miller, Jr.
– The Hurricanes moved to 11-5 this season when they have nine healthy scholarship players, including 7-2 when Stone is a part of that group.
– Miami is now 14-0 when leading or tied at halftime and 0-13 when trailing through 20 minutes this season.
– The only other time this season Miami allowed zero turnovers in a half was in the second frame Feb. 19 at Virginia Tech.
– Prior to allowing 10 makes in the first half Sunday, the only other time Miami conceded even nine made 3-pointers in a half this year was Jan. 21 at then-eighth-ranked Duke.
– Sunday marked the fifth time this season, including the third time it happened against a team other than Louisville, that Miami allowed two opposing players to post a double-double.
– Vasiljevic, now with 262 made 3-pointers, surpassed Darius Rice for sole possession of third place on Miami’s all-time list and tied Virginia’s Joe Harris for No. 22 on the ACC’s career leaderboard.
– Vasiljevic, who moved past 3,250 minutes played as a Hurricane, recorded his 63rd double-digit scoring output.
– In addition, Vasiljevic passed Guillermo Diaz for fifth place on Miami’s ACC-only career scoring list, now owning 634 such points.
– Beverly, who eclipsed 200 points in his young career, logged his ninth double-figure scoring performance.
– Stone, who surpassed 350 rebounds as a collegian, tallied his 22nd double-digit point total.
– Wong, moved past 200 points at Miami, registered his ninth consecutive double-figure scoring performance after never previously hitting that mark.
– Miller eclipsed 750 minutes played in his career,
– Redshirt junior forward Sam Waardenburg surpassed 400 points as a Hurricane.