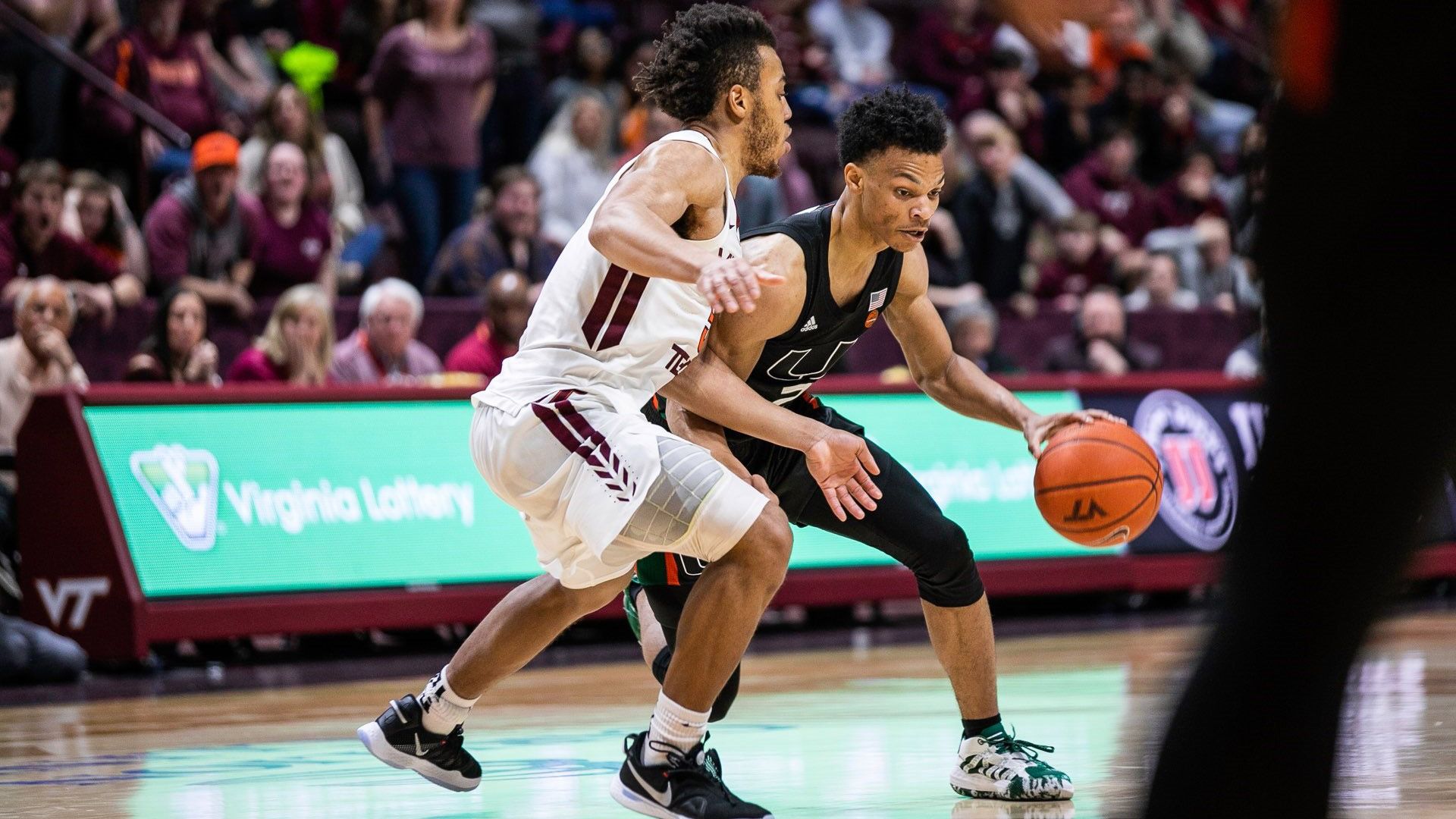 Freshman guard Isaiah Wong, who made key plays at the end of each frame, paced the Hurricanes with a career- and game-high 27 points in the program’s first-ever triple-overtime outing, which also served as the first by any teams in ACC play since Dec. 20, 2003.

“I thought we played a great first half, really shared the ball, scored 41 points and defended them very well. However, in the second half we fouled too often and gave them a chance to make a comeback with no time running off the clock,” Miami head coach Jim Larrañaga said. “But then, in the late stages of the game I put out Isaiah Wong at the point and Isaiah was able to drive the ball to the basket, get fouled and make all his free throws, and that is basically what forced the first overtime. And then we kept it rolling and it was a very good team effort in the second and third overtime.”

The Hurricanes answered right back with nine straight points to begin a 13-2 run, grabbing a 30-22 edge with 5:30 remaining in the half. Nine of the 13 points came from junior guard Chris Lykes, who helped Miami go up by as many as 12 points before taking a 41-32 lead into the intermission.

Miami shot 45.2 percent (14-of-31) from the floor in the opening 20 minutes, connected on all 10 of its free throws and committed just three turnovers.

Virginia Tech then scored five straight points and led, 77-74, with 13 seconds left, but redshirt junior guard Kameron McGusty converted on a three-point play with 5.0 on the clock to tie the score. Redshirt senior forward Keith Stone blocked the Hokies’ attempt at the other end, sending the game to overtime.

The Hokies led by four points for much of the extra session, but Wong scored the final points of the frame in the closing minute, including a jump-shot with six seconds to play, to send it into double overtime even at 84.

Wong once again extended the game for another frame by hitting a game-tying jump-shot with 16 ticks left in double overtime, which the Hurricanes followed up with a defensive stop.

Miami took a 98-92 advantage with 56.8 ticks to go in the final period before Cone hit a 3-pointer at the other end to slice the lead in half just 7.2 seconds later. The Hurricanes, however, scored the final four points of the game in the closing 20 seconds to seal the victory.

“I think all the ACC games are a challenge. There are so many overtime games and games that are decided by five or less points,” Larrañaga said. ” . . . We were on the road [recently and] we lost a very close game to Pittsburgh. So, we expect every ACC game to be a struggle and then you just have to find a way.”

Wong, who grabbed a career-best 12 rebounds to notch his first double-double, hit all 14 of his free throws, tying the second-most makes without a miss in program history, and scored all but six of his points in the final 20 minutes.

McGusty and junior guard Chris Lykes also finished with 20-plus points, registering 21 and 23, respectively. It marked the first time the Hurricanes have had three 20-point scorers since Jan. 25, 2009, also against the Hokies.

Stone finished with 12 points and career-high 18 rebounds, good for the most ever by a Hurricane in an ACC contest, and redshirt junior center Rodney Miller, Jr., added 10 points to give Miami a quintet of double-digit scorers for the third time this season.

Redshirt freshman guard Tyrece Radford posted a career-high 26 points and added 12 rebounds to log a double-double for the Hokies.

Redshirt freshman guard/forward Landers Nolley II also had a double-double, finishing with 18 points and 11 boards, but Miami held him to 4-of-21 shooting from the floor. Meanwhile, Cone notched a career-high of his own, totaling 20 in the Hokies’ setback.

Miami concluded the game 29-of-32 (90.6 percent) at the stripe and connected on its first 25 attempts of the night before missing three of its first five in the third overtime session. Virginia Tech, meanwhile, had a stellar 24-of-28 mark (85.7 percent) from the line in its own right and the teams combined for just 21 turnovers across the 55 minutes.

The Hurricanes had a 55-45 edge on the glass and tied their highest total in any league game since joining the ACC. The only other time they logged 55 boards in an ACC contest was Jan. 10, 2007, in a win at No. 25 Maryland.

Miami, which set a program record for points in an ACC game and posted 100-plus points against a Division I foe for the second time since joining the league, resumes play Sunday in Notre Dame, Ind., with a 6 p.m. matchup at Purcell Pavilion against Notre Dame.

MIAMI HURRICANES POSTGAME NOTES
– The Hurricanes moved to 24-17 all-time against Virginia Tech, including 8-9 on the road and 14-7 in Larrañaga’s tenure.
– Larrañaga, who entered the game with the 10th-most victories of any active Division I coach, is now 659-443 in 36 years as a head coach, including 189-109 in nine seasons at Miami.
– Miami is now 10-9 in overtime games under Coach L, including 7-5 in ACC competition, 2-1 this season and 4-1 in two-plus overtimes.
– For the second time this season, Miami used a starting lineup of Lykes, Miller, Stone, Wong and senior guard Dejan Vasiljevic.
– The Hurricanes moved to 11-4 this season when they have nine healthy scholarship players, including 7-1 when Stone is a part of that group.
– Miami is now 14-0 when leading or tied at halftime and 0-12 when trailing through 20 minutes this season.
– This is the eighth time in 2019-20 that Miami has allowed a sub-40 percent field goal clip and it is 7-1 in those games, including 4-1 in ACC action.
– Wednesday marked the first road victory of the calendar year for Miami, snapping a six-game skid after a Dec. 31 overtime victory at Clemson.
– The Hurricanes have won three straight ACC games for the first time since closing the 2017-18 regular season with four straight from Feb. 19 to March 3.
– Miami’s 21-of-21 mark from the line in regulation was the best by any ACC team this season, surpassing Florida State’s 17-of-17 ledger against North Alabama.
– The Hurricanes’ 90.6 percent free-throw clip was its best in an ACC game with 25-plus attempts, its third-best with 20-plus tries and its fifth-best with 15-plus shots from the line.
– The 29 made free throws were the third-most Miami has ever posted in an ACC game, while its 33 made field goals tied for the seventh-most and the 79 field-goal attempts set a program record in ACC competition.
– In addition, the 29 makes tied Duke (Feb. 1 at Syracuse) and Georgia Tech (Feb. 19 vs. Wake Forest) for the most by an ACC team this year.
– The Hurricanes 102 points and 55 rebounds are both the most by any ACC team in league competition in 2019-20.
– The only other time Miami scored 100 points against a Division I opponent since joining the ACC was Nov. 19, 2015, when it tallied 105 versus Mississippi State in San Juan, P.R.
– In the aforementioned last outing with three Miami players logging 20-plus points on Jan. 25, 2009, against Virginia Tech, Dwayne Collins had 23, Brian Asbury posted 21 and Jack McClinton logged 20.
– The last time Miami had five double-digit scorers in a game was Dec. 17, 2019, in the win over Temple at the Barclays Center in Brooklyn, N.Y.
– The last time two Hurricanes tallied double-doubles in the same game was March 5, 2019, when Anthony Lawrence II and Ebuka Izundu did so against Pittsburgh.
– This is the fourth time in 2019-20 an opposing team had two players post double-doubles, including the second time a team other than Louisville did so.
– Stone notched his 21st double-digit scoring output, second double-figure rebound total and first double-double.
– Before Stone grabbed 18, the program record for rebounds in an ACC contest was 17, a mark held by Tonye Jekiri who reached that figure twice.
– Stone’s 18 boards tied Notre Dame’s John Mooney for the second-most by an ACC player this year.
– Lykes, who surpassed both 1,150 points and 150 made 3-pointers at Miami, recorded his 61st double-digit scoring performance and 15th 20-point game.
– McGusty, who eclipsed 900 points as a collegian, registered his 46th double-figure point total and 10th 20-point performance.
– Wong, who moved past 500 minutes played, logged his eighth consecutive double-digit scoring outing after never previously achieving that feat, as well as posted his third 20-point game and, as aforementioned, first double-double.
– This is the first time a Miami freshman posted a double-double or a 10-rebound game since Bruce Brown, Jr., achieved both feats against George Washington on Dec. 22, 2016.
– Wong is the 13th Miami freshman, including the 11th true freshman, since the program rebirth in 1985-86 to tally at least three 20-point outings in a season.
– Wong, who scored the 10th-most points by a Miami freshman—ninth-most by a true freshman—is the 13th Miami freshman—11th true freshman—since the program rebirth in 1985-86 to tally at least three 20-point outings in a season.
– Wong is the ninth freshman—eighth true freshman—since the rebirth with a 25-point game and the fifth—fourth true freshman—to do it on the road.- The only other players in program history to make 14-plus free throws in a game without a miss are Jack McClinton (16-of-16, vs. NC State, 3/7/09) and Lykes (14-of-14, vs. Wake Forest, 1/12/19).
– Wong’s 14 makes tied North Carolina’s Cole Anthony for the most by an ACC player without a miss this season and also matched him for the second-most by an ACC player regardless of attempts this year.
– The last Power Five player with 27-plus points, 12-plus rebounds and 14 made free throws in a game without a miss was USC junior Nikola Vucevic on Dec. 29, 2010, at home against Washington.
– No other Division I freshman has recorded a 25-point, 10-rebound game while making 10-plus free throws without a miss in the past 10 seasons and only one other player regardless of class, Washington State sophomore CJ Elleby, has done so in 2019-20.
– Miller amassed his 10th double-figure point total, all of which have come this season, with seven coming in his last 10 appearances.
– Stone (47), Vasiljevic (44) and Wong (42) all set career highs in minutes, while McGusty (44) tied his top total.
– Freshman forward John Ojiako totaled five blocked shots for the Hokies, the second-most by a Miami foe this year.
– Radford’s 26 points were the second-most by a Miami opponent this season and he now has two of the four 24-plus-point performances by a Hurricane foe in 2019-20.