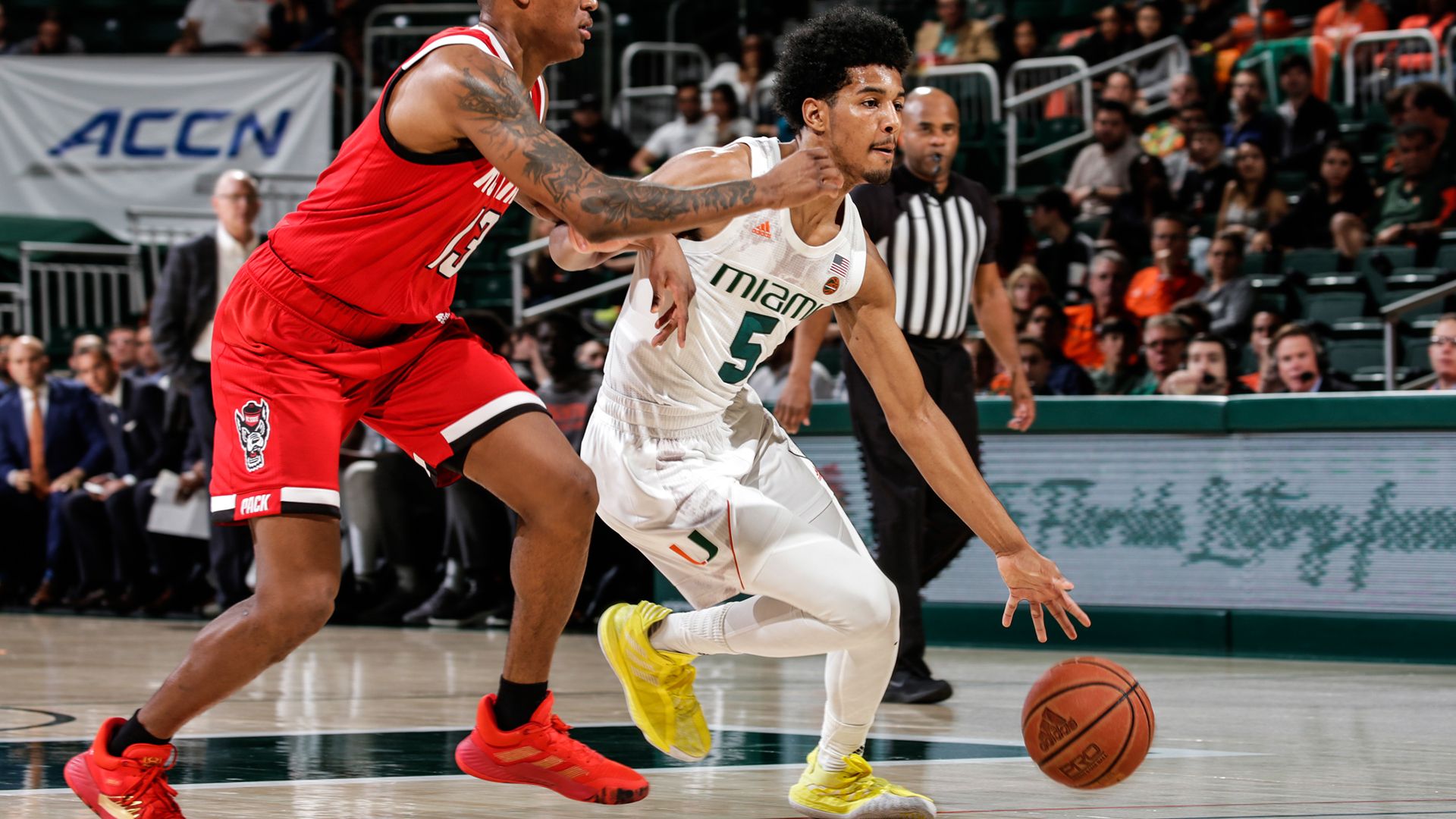 Freshman guard Harlond Beverly paced the Hurricanes, who cut an 18-point second-half deficit down to three, with a career-high 20 points in the setback at the Watsco Center.

“I thought we showed a lot of character fighting back so hard in the second half, cutting the lead to three,” Miami head coach Jim Larrañaga said. “And then Markell Johnson just elevated himself, his game and his team, and was able to make all the key decisions and plays.”

The Hurricanes twice trimmed their deficit down to five, but the Wolfpack scored the next nine points before a Miami basket to close the half made it a 12-point game, 44-32, at the intermission. Miami shot 1-of-6 (16.7 percent) beyond the arc and 5-of-12 (41.7 percent) from the line in the opening 20 minutes.

Redshirt senior guard CJ Bryce (18) and redshirt junior guard Devon Daniels (14) combined for 32 first-half points for the Wolfpack, with Bryce’s total the most by a Miami foe before the break this season.

NC State extended its cushion to 18 points on four occasions in the second half, but the Hurricanes would not go away. Miami went on a 16-2 run, including scoring nine consecutive points, to make it a four-point game, 65-61, with 7:44 to play.

From there, the Hurricanes cut the deficit down to three, three times, including twice having a chance to tie the score, but were unable to pull any closer.

Beverly, who became the first Miami freshman with a 20-point game since Jan. 27, 2018, when Lonnie Walker IV did so against Florida State, shot 7-of-12 from the floor and 5-of-6 at the line, also setting a new top mark in made field goals. He scored 13 points in the second half and played 40 minutes for the first time.

Bryce finished with a game-high 22 points, as Miami held him to just four on 2-of-7 shooting in the second session. He added a game-best 11 rebounds to notch a double-double.

Johnson also compiled a double-double, totaling 19 points, including 16 in the second half, and 12 assists, the most by a Miami foe since Providence’s Kris Dunn notched 13 on Dec. 22, 2014. He scored NC State’s final eight points and went 6-of-6 from the line in final minute.

Junior guard Braxton Beverly added 14 points for the Wolfpack, as did Daniels, while redshirt freshman forward Manny Bates chipped in 10.

Up next for the Hurricanes is a trip to Tallahassee, Fla., where they meet eighth-ranked Florida State Saturday at noon, live on ACC Network from the Donald L. Tucker Civic Center.

MIAMI HURRICANES POSTGAME NOTES
– The Hurricanes moved to 11-15 all-time against NC State, including 5-6 at home and 7-8 in Larrañaga’s tenure.
– Larrañaga, who entered the game with the 10th-most victories of any active Division I coach, is now 656-442 in 36 years as a head coach, including 186-108 in nine seasons at Miami.
– For the fourth game in a row, Miami used a starting lineup of Beverly, Vasiljevic, Wong, redshirt junior center Rodney Miller, Jr., and redshirt junior forward Sam Waardenburg.
– As announced prior to the game, Lykes, a junior, did not play for the four straight outing due to a groin injury after competing in the first 82 contests of his career.
– As also announced before tip-off, McGusty, a redshirt junior, missed his third game in the past four due to back spasms after starting the first 18 affairs of the year.
– Miller, who scored Miami’s first four points, was limited to just 21 minutes after suffering an ankle injury during the game.
– Miami is now 11-0 when leading or tied at halftime and 0-11 when trailing through 20 minutes this season.
– The Hurricanes logged double-digit steals for the first time this season, notching exactly 10.
– The last time a Miami opponent had five players score in double figures was Nov. 5 in the season opener against fifth-ranked Louisville.
– NC State is the first team other than Louisville, which did so twice, to have two players log a double-double in the same game against Miami in 2019-20.
– Johnson is the first Hurricane foe to log double-figure assists in a game since Syracuse’s John Gillon recorded 11 on Jan. 4, 2017.
– Bryce’s 18 points in the first frame tied the total Louisville’s Jordan Nwora put up in the second session Nov. 5 as the most the Hurricanes have allowed in half this season.
– Beverly notched his seventh double-digit point total, including his third in a row.
– Waardenburg eclipsed both 100 free-throw attempts and 1,750 minutes played as a Hurricane.
– Vasiljevic, who surpassed 400 made field goals at Miami, registered his 60th double-figure scoring performance.
– Wong posted his fourth consecutive double-digit scoring total after not reaching that mark in any of his first 18 outings.