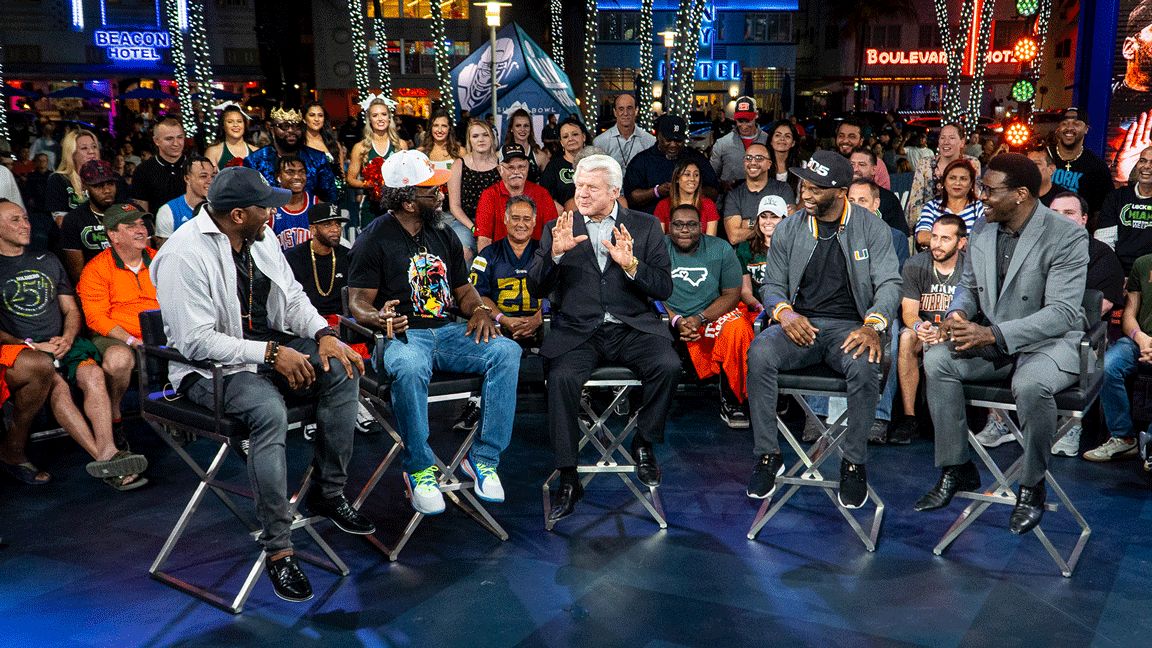 Hurricanes greats Michael Irvin, Ray Lewis, Ed Reed and Reggie Wayne sat on a South Beach stage Wednesday evening for more than an hour and surrounded by some of their fans, revisited their time at Miami as part of a Fox Sports pre-Super Bowl special dubbed fittingly enough “The ReUnion.”

And while they celebrated their respective pasts and were surprised on set with a visit from former Hurricanes coach Jimmy Johnson, the four greats also looked to Miami’s future and expressed hope that the younger Hurricanes paid attention to the stories they shared.

“This was an epic moment. This is a moment in time that needed to be done and it couldn’t have been done in a greater place than the city of Miami, where we built this,” said Reed, who was inducted into the Pro Football Hall of Fame last year after a 12-year career with the Baltimore Ravens, Houston Texans and New York Jets. “We did everything to get to the point where we’re at in this city and to do this with my roommate [Wayne], I’m tearing up. This is my bro right here. And Ray was my brother in Baltimore. I can’t put this into words.

“We also wanted to do this for the youngsters to see how it was. That’s what this was about.”

During the 75-minute show, Irvin, Lewis, Reed, Wayne spent time reflecting on everything from their respective recruiting processes, the reasons they chose to play at Miami and how the culture in Coral Gables was built as the Hurricanes won five national championships between 1983 and 2001.

They recalled, too, how more often than not, the competition on the Greentree Practice Field was so fierce they refused to head to the sideline, even if that meant battling through exhaustion or minor injuries.

“You didn’t want come off that field because of who was behind you,” Reed said. “You’re not tired, you’re not hurt. You had to be dying to get off that football field.”

Added Wayne, “Me and Santana Moss were the starting receivers. We had our own substitution. When you’d get tired, you’d tap the helmet and then, the backup would come in. I had Andre Johnson behind me. I ain’t coming out, because I ain’t getting back in there. I hurt my ankle, right? [Former UM assistant coach] Curtis Johnson was like, ‘Reggie, come out, come out.’ And I was like, ‘No, I got this.’ I was not letting him in the game.”

As much as the former Hurricanes greats laughed, though, the show featured several emotional moments, including when Johnson thanked the former players for what they’d done for the Miami program and when Irvin, Lewis, Reed, and Wayne reflected on how their families had helped them all grow into the players and men they were.

The group also paid tribute to the late Kobe Bryant, who died earlier this week.

“How are you affecting everybody else? … He affected everybody’s life, whether you knew it or not. That’s the one thing I’m going to remember,” Wayne said.

Before wrapping up their time on the stage, the four Hurricanes legends also shared their favorite memories of their time at Miami and engaged in some friendly banter about who was truly the greatest player to wear orange and green before eventually getting serious again.

“They did a panel about this already. We can pull up an article,” Reed informed the others on stage.

As Lewis, Wayne and Irvin pressed him for details, the former safety smiled.

“They said yours truly,” Reed eventually laughed as Lewis stomped on the stage.

Reed continued, “But, I disagree with that because of this – and Reggie said it, we all said it. I would’ve been nowhere without my teammates pushing me. … I wouldn’t have had the interceptions I had without this dude [Wayne]. … It wasn’t about the one guy. All of us had teammates that drove us, that pushed us to where we are now. Those battles of offense versus defense were like no other. … That’s all it was about.”

Added Lewis, “I don’t think you can rate Hurricanes. You can’t rate us. We’re one. We think alike, we hunt alike. We’re only one. Only one.”

While Irvin, Lewis, Reed and Wayne will spend the rest of their respective Super Bowl weeks at various engagements around South Florida, they all expressed hope reunions like the one they just shared continue, even off camera.

“As they would say, this was hashtag epic. I think we need to do it more. I think this is a game-changer,” Wayne said. “To sit back and share the stories, and there were so many stories that were untold, we could have stayed out here until midnight. … This is amazing. It just goes to show the family we have. The brotherhood. And that’s all we were ever about.”