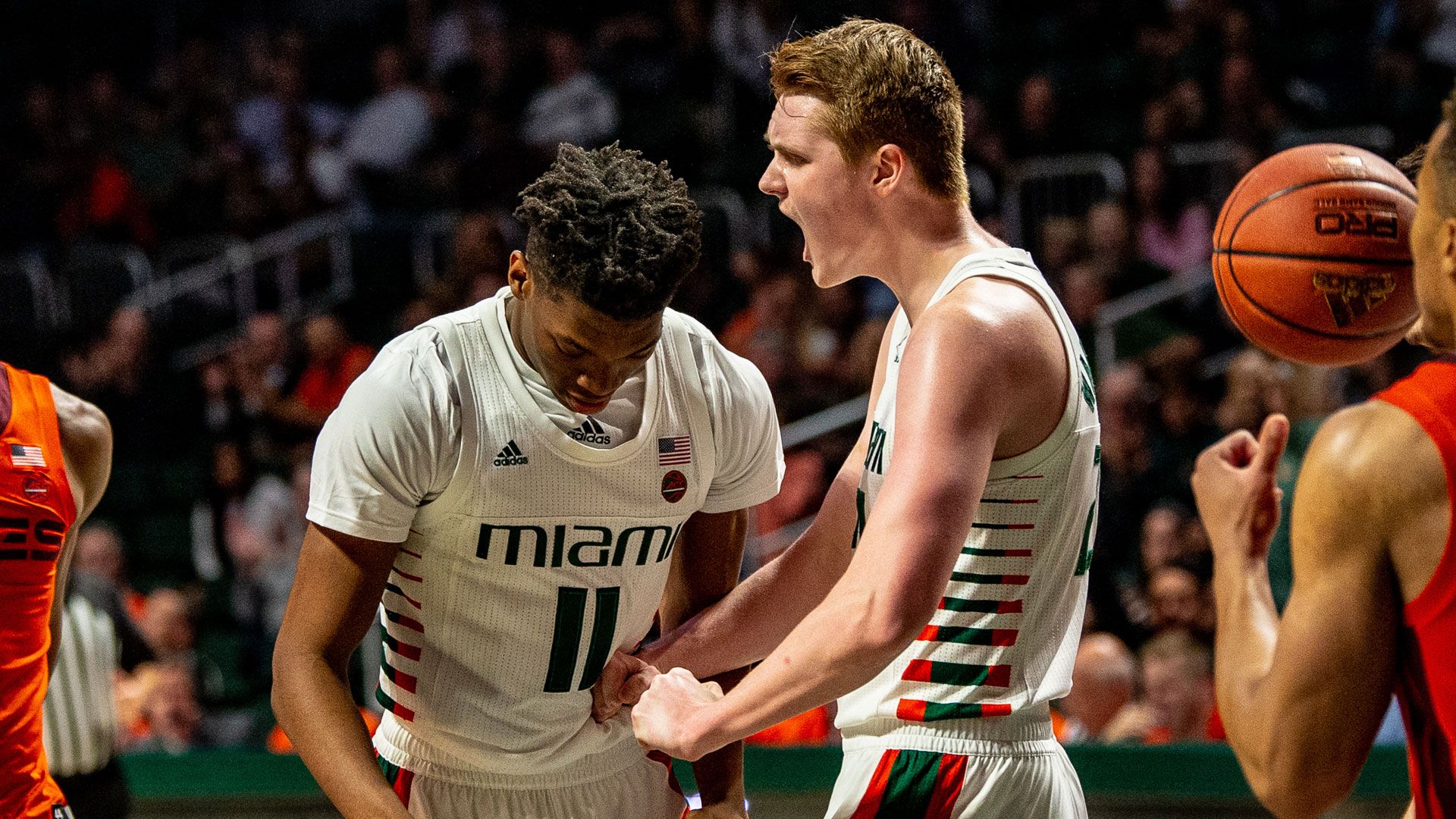 Miami (11-9, 3-7 ACC), paced by 18 points from senior guard Dejan Vasiljevic, led for over 36 minutes and by as many as 22 points in an impressive showing at the Watsco Center.

Both teams got off to hot starts offensively, with Miami taking a 14-12 lead after just five minutes of play. The Hurricanes connected on six straight shots after missing their first attempt.

After a slow second-half beginning on the offensive end that featured a five-minute scoring drought and only two points in the first 6:46, Miami saw its lead dwindle down to 11, 54-43, with 8:16 remaining.

The Hokies trimmed the deficit all the way down to four with 1:01 on the clock, but Miami closed the game on an 8-2 run to notch its first double-digit win in ACC play.

In addition to his team-high 18 points, Vasiljevic added seven rebounds in 37 minutes of action. Freshman guard Harlond Beverly, making his second consecutive start, totaled 13 points, including six in the final 42 seconds, to go along with a career-high-tying six assists.

“As our freshmen get more and more comfortable and more confident, playing more and more minutes, they get better,” Larrañaga said of Beverly and Wong. “Harlond played 31 minutes. Isaiah played 29 minutes. They both scored the ball—they both got in double figures—and that has to give them confidence because it certainly gives me confidence.”

Redshirt freshman guard Tyrece Radford scored a career- and game-best 24 points for the Hokies, posting a 10-of-13 clip from the field. He added a team-high eight rebounds in the setback.

Redshirt freshman guard/forward Landers Nolley II added 14 points, seven of which came in the final 3:16. The ACC’s third-leading scorer entering the day at 17.9 points per game, Nolley shot 6-of-15 from the floor and had his fourth-lowest point total in ACC action.

Up next for the Hurricanes is a visit to Pittsburgh, where it plays Sunday at noon at the Petersen Events Center, live on ACC Network, against Pittsburgh.

MIAMI HURRICANES POSTGAME NOTES
– The Hurricanes moved to 23-17 all-time against Virginia Tech, including 12-5 at home and 13-7 in Larrañaga’s tenure.
– Larrañaga, who entered the game with the 10th-most victories of any active Division I coach, is now 656-440 in 36 years as a head coach, including 186-106 in nine seasons at Miami.
– Miami now has 200 wins at the Watsco Center, posting a 200-77 (.722) overall record, including a 105-33 (.761) ledger under Coach L and a 55-13 (.809) tally in the past 68 contests.
– For the second game in a row, Miami used a starting lineup of Beverly, Miller, Vasiljevic, Wong and redshirt junior forward Sam Waardenburg.
– As announced prior to the game, Lykes (groin injury) did not play for the second straight outing after competing in the first 82 contests of his career.
– Redshirt senior forward Keith Stone returned to action after missing the past six games with a left knee injury.
– Miami is now 11-0 when leading or tied at halftime and 0-9 when trailing through 20 minutes this season.
– Tuesday marked the fourth time this season, including the second in ACC play, that Miami allowed just two double-digit scorers.
– The prior game in which the Hurricanes led by 19 at the break this season was Dec. 2 at Illinois.
– From the 11:54 mark of the first half to the 12:43 mark of the second half, a span of 19:11, Miami held the Hokies without a made 3-pointer.
– Five Miami players scored at least five points in the opening half, led by the 11 from Miller, the most he has scored in a half as a collegian.
– Miller, who went 5-of-5 in the first half and recorded his seventh double-figure scoring outing, played in his 50th game at Miami.
– Vasiljevic, who reached 1,150 points and eclipsed 3,000 minutes played as a collegian, entered the game with one missed free throw in 38 attempts this season, but missed two of his four against the Hokies.
– Vasiljevic, who registered his 58th double-digit point total, also tied his ACC high with seven made field goals and his overall career high with 16 attempts.
– Waardenburg surpassed 300 rebounds in his career.
– Wong, who did not score in double figures in the first 18 outings as a Hurricane, has now logged 10-plus points in back-to-back games.
– Beverly, who moved past 50 made field goals in his young career, finished with a career-high tying four rebounds, his new top mark in ACC play.