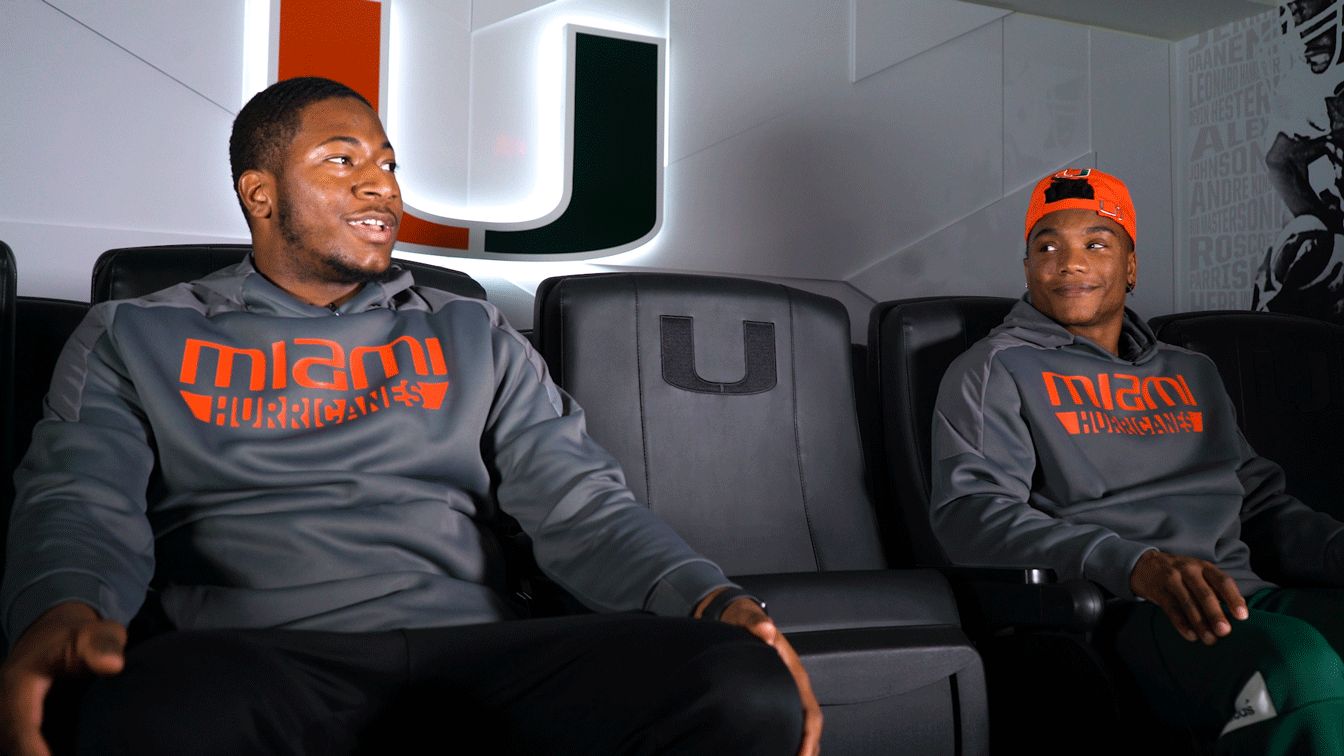 King, Roche Joining Forces at The U

D’Eriq King and Quincy Roche shared a conference during the first parts of their respective college careers. And that meant, given their positions, understanding what each did well.

It also meant trying to find ways to neutralize those strengths.

“He was in the game plan every single year. We tried to know where he was at all times. … Just getting away from him is a task. You have to do the best you can do,” said King, a quarterback.

The good news for both the signal caller and the pass rusher? The only place they’ll have to worry about containing each other these days is on the practice field at Miami, where they’ve now joined forces to play their final season of college football together.

They’re plenty happy about that fact. The Hurricanes might be even happier.

Earlier this week, King and Roche – two of the nation’s top graduate transfers – set the college football world abuzz when each decided to join the Miami program.

To some, their decisions might have been surprising, given the fact the Hurricanes will take the field this fall looking to bounce back from a tough 6-7 season.

But both King and Roche see the opportunity to make a difference in Coral Gables and both believe they can each have significant roles in helping second-year coach Manny Diaz get the Hurricanes back to competing for the ACC Coastal Division title.

“I kind of played in a fast, aggressive defense,” said Roche, who was the American Athletic Conference Defensive Player of the Year last fall after totaling 49 tackles, 13 sacks, 19 tackles for loss and two forced fumbles at Temple. “So, [Miami] reminds me of a lot of the same things. Fast, aggressive, high-energy, that’s what I’m used to. I think that will kind of make this transition smooth.”

Roche’s addition to the defense is expected to give an already-talented front a boost, particularly if he’s lined up with another of the nation’s top pass rushers, Greg Rousseau, whose 15.5 sacks last fall ranked second nationally and helped him earn ACC Defensive Rookie of the Year recognition.

While an impending quarterback competition looms this spring, King’s addition, too, is big.

Though the former four-star prospect played in just four games last season before deciding to redshirt at Houston, King was an absolute force in 2018.

He completed 64 percent of his passes and threw for 2,982 yards with 36 touchdowns and just six interceptions. He ran for another 674 yards and 14 touchdowns and earned numerous honors for his play, including a spot on the American All-Conference Second Team.

Those are just two of the big reasons King expects he’ll feel comfortable at Miami, even as the Hurricanes, as a whole, are preparing to adopt a new offensive system and he’ll personally have to adjust to playing for another set of coaches.

“Coach Diaz is a great guy. That’s the first thing I noticed about him. He’s real genuine. He’s not loud and screaming. He’s just a good guy. And Coach Lashlee [who came to Miami from SMU], he was also in the same conference as me and Quincy, so I kind of knew his offense a little bit playing against him and kind of had a relationship,” King said. “We just built on that relationship.

“I’m very excited. I played in an offense pretty similar to it in Houston … just coming down here, in this offense, I’m ready to go. I’m ready to work.”

While both King and Roche are established playmakers at their respective positions, the two know that with their level of experience, they’ll be called on to provide something more than just touchdowns and sacks.

With the departures of linebackers Shaquille Quarterman and Michael Pinckney, the Hurricanes know they are going to need veterans to step up and lead the defense. The same applies on the offensive side of the ball, which lost veteran receiver K.J. Osborn and running back DeeJay Dallas, who was widely regarded as one of Miami’s heart-and-soul players last season.

King and Roche know that as redshirt seniors they’ll be counted on to set examples.

Neither is shying away from that reality.

“I feel like I’m a lead-by-example type of guy, but [I can] also be vocal at times. I’m not a big ‘rah-rah’ guy, but I come into the building every single day to try and do as much work as possible to get better and build a relationship with the guys,” King said. “I also feel that’s important, just having a relationship in the locker room and everybody being on the same page, I think that can help a team win. That’s what I bring.”

Added Roche, “I want to come in and just mesh with the team, start building the chemistry. My leadership style is that I’m a leader by example. … I just want to exhibit the right thing so people can look at me and say, ‘I want to go that way. I want to do the right thing.'”

For both King and Roche, the past few weeks have been plenty busy.

After visiting Miami and deciding to join the Hurricanes, they’ve had to relocate to South Florida from Houston and Philadelphia, respectively. They’ve gone through the process of enrolling in Miami’s graduate program. They’ve worked to meet as many of their new teammates and coaches as possible, all while trying to get settled in their new homes.

Soon enough, they’ll be diving into offseason workouts. And in the coming weeks, they’ll join their new teammates on the practice field. Before long, the season will be upon them and they know they’ll truly step into the spotlight and make that famed run through Miami’s smoke for the first time when the Hurricanes return to action in September.

It will be a moment – and a season – they won’t be taking for granted.

“There’s a lot of history here, a lot of winning traditions and I was excited they even wanted me, to be honest with you,” King said. “Just being here, and making the best of the year I have here. … It’s a big deal. I don’t take it lightly. I know the history of the program is winning, has always been winning. I’m coming here just ready to work, get to it and try to win as many games as possible.”

Said Roche, “It’s a big deal. This program is historic. It has a lot of history and the ‘U’ on the side of your helmet, that’s a big deal to me. I’m just trying to make the best of it.”