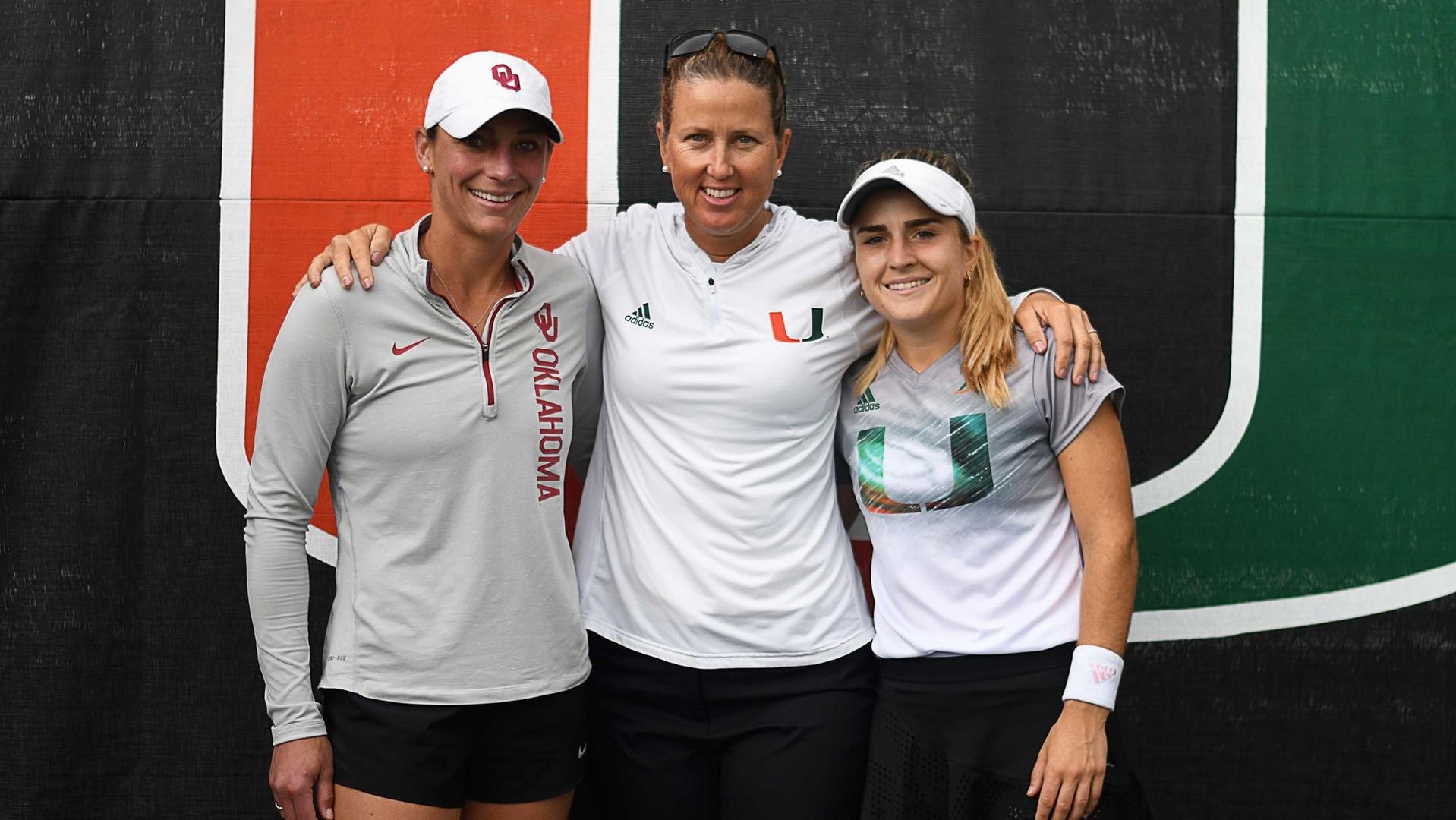 CORAL GABLES, Fla. – It was, for Paige Yaroshuk-Tews, a memorable few days.

As the Hurricanes played their way through the Miami Spring Invite last weekend, Yaroshuk-Tews found herself in a unique spot – coaching one of the Hurricanes’ two national champions through her matches while working against the other.

On Court 1 at the Neil Schiff Tennis Center, Miami senior Estela Perez-Somarriba, who, last May, won the second national singles championship in program history and is, in her final season as Hurricane, moving closer to clinching the school record for individual wins.

On the other side of the Schiff, Oklahoma coach Audra Cohen, who, during her time as a player at Miami put together one of the most dominant resumes in program history, winning the Hurricanes’ first singles national title in 2007, and earning both the ITA National Player of the Year and ACC Player of the Year awards in both 2006 and 2007.

No wonder Yaroshuk-Tews, who coached both of Miami’s champions and is in the UM Sports Hall of Fame along with Cohen, kept smiling.

“It’s unbelievable. It makes me feel old, that’s for sure,” she laughed. “But, you know, I have so much respect for Audra and what she brought to our program as a player and the heart and passion she brought to her tennis every single day. The way she competed was completely in line with how I coached. …

“And then, gosh, I’m still lucky to have Stela here. I’m just so blessed to have great people around our program. … Her ability to always find such a high level of tennis in such an important moment and consistently bring the physicality to the game that she does, I’ve never seen anything like it.”

As meaningful a moment as it may have been for Yaroshuk-Tews, Miami’s two national champions appreciated the moment they shared, too.

For Cohen, a South Florida native who took over as Sooners coach in 2016, any trip home is memorable.

The former St. Thomas Aquinas standout had her family in attendance at last weekend’s matches, there was time to enjoy a little bit of home with a Publix run or two and she had the opportunity to catch up, even if it was briefly, with both her former coach and the young player currently adding to the Hurricanes’ rich tennis history.

“It’s kind of a surreal feeling, but at the same time, it’s truly a special feeling and an honor to walk through here and see your team that got to the finals of NCAAs [in 2006] and just the history and the memories on this court right here,” Cohen said, gesturing to Court 1. “I don’t think I lost a singles match on that court and I feel like it’s so cool now to see Stela just killing it there, too.

“It’s such a special feeling you have when you’re the No. 1 player here and you’re able to walk on that court like it’s yours. Stela’s done an unbelievable job of doing that, too, and I have so much respect for her and what it takes to do that.”

For Perez-Somarriba, having the chance to meet with Cohen was just one part of what made the weekend special.

The reigning national champion helped Miami close a dominant weekend with a 6-3, 4-6, 6-4 win over Vanderbilt’s Christina Rosca, who, last year, notched a win against Perez-Somarriba in the same tournament.

With her win, the third-ranked Perez-Somarriba has now picked up a win over all five of the players who handed her losses during her championship season last spring and 11 of the mere 21 she has fallen to in her career.

“I’ve known for the last three years that each player wants to beat me really, really bad. And honestly, I always expect their best tennis,” Perez-Somarriba said. “When you always expect that, I think there are no surprises. You always expect a fight and there’s always a lot on the table. … this player beat me last year, in two sets, so it feels really nice to get revenge. That’s always a nice feeling. … In the third set, I was down 2-0 and honestly, at that point, I knew I had to play tougher, play more aggressive. I didn’t want to leave the court with any regrets. … In order to beat these players, I need to play like that. You need to play to win. You can’t play not to lose. I was just able to fight back and that’s what I did. I’m real proud.”

That approach to the game, that drive, is something Yaroshuk-Tews knows both Perez-Somarriba and Cohen share.

It’s visible, she says, even as Cohen now coaches herself. And it will be an asset as Perez-Somarriba looks to repeat as champion.

“It’d be fun to put them side-by-side, honestly, and look at their strengths and weaknesses,” Yaroshuk-Tews said. “Audra’s done a great job and she’s going to be successful wherever she ends up, I’m sure of it. There’s no doubt. And Stela, I think people probably get bored of me saying the same thing there, but I’ve watched this girl compete and every time, it touches me because it’s incredible. … As a coach, I sit there and I’m wowed.”