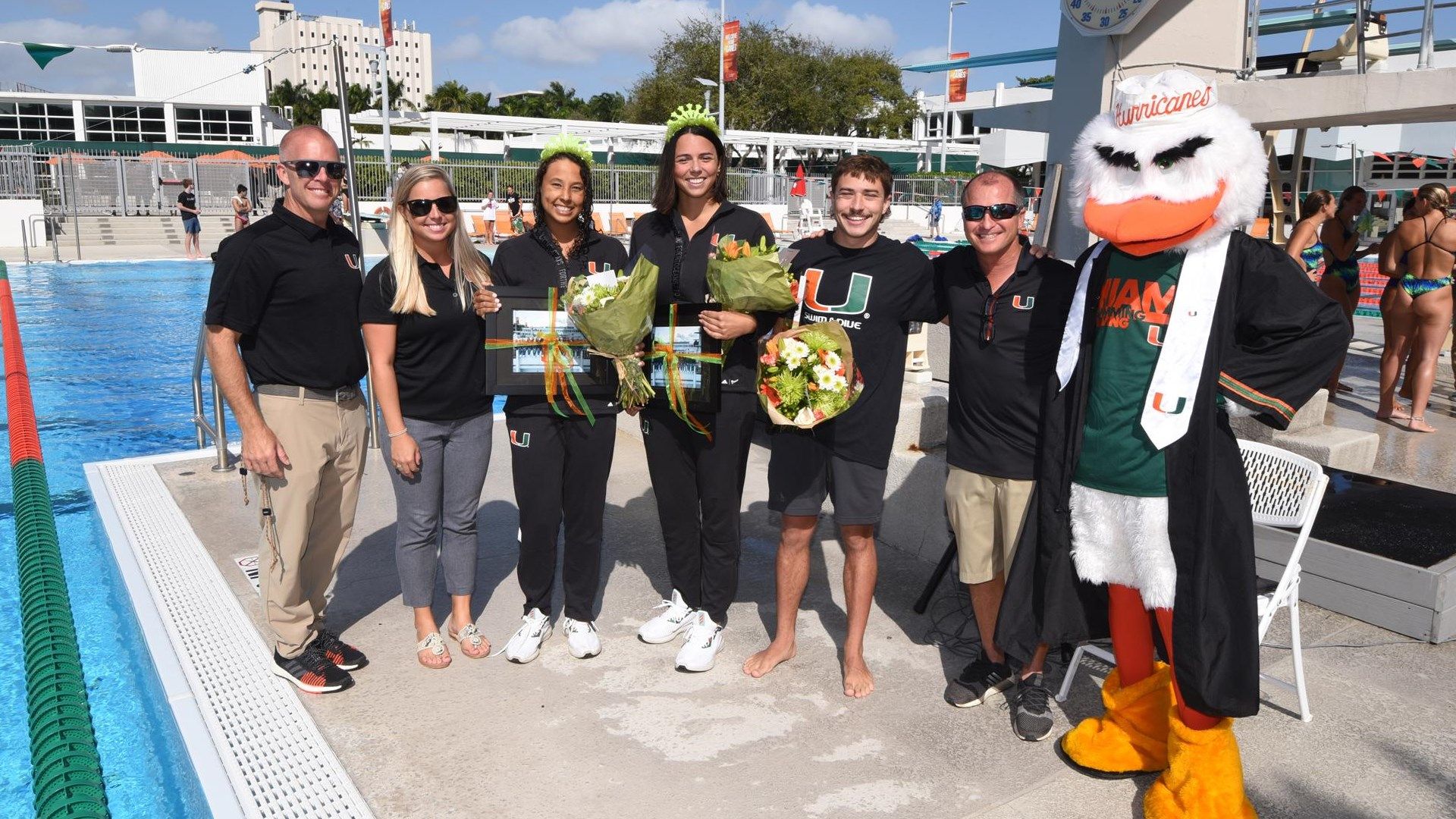 Miami Cruises to Win vs. FGCU on Senior Day

Miami was in command from the start, earning its third straight victory over the Eagles in dominating fashion. After the Hurricanes won the 400-yard medley relay in a time of 3:49.21, Miami ripped off individual wins in seven of the next eight events to take a sizable lead.

“It’s gratifying and I’m happy for them,” Kershaw said. “As I told the team beforehand, for me, these two seniors represent perseverance. They’ve been through injuries, through hard times and low moments in their careers – as most do – but they’ve come through. They never give in.”

“I’ve never seen an athlete in the world, in diving, that has such mental strength,” di Fazio said. “This sport is 90-percent mental. You can be physically fit and have all the right skills, but if you go to a meet and can’t control the situation, the pressure…many people just fall apart. David is a rare breed.”

Appropriately enough, Dinsmore emerged victorious in a platform exhibition, edging out teammate Zach Cooper. Freshman Mia Vallee picked up top performances in the 1-meter (317.40) and 3-meter (334.95), with teammate Millie Haffety taking second in both events (316.13, 308.63) to add points for the Hurricanes.

Shortly after being recognized in the pre-meet festivities, McGinnis opened individual action by winning the 1,000-yard freestyle (10:35.05) and would pick up another win later on in the day in the 500-yard freestyle (5:06.24).

Freshman Isabel Traba was a standout once again, winning the 200-yard butterfly (2:01.43) against stiff competition from FGCU’s Petra Halmai (2:04.74). She came right back in the next event to take second in the 500-yard freestyle (5:09.85), just behind McGinnis

“It was solid. It was well-rounded. It’s hard to pick any individuals out today,” Kershaw said. “They were executing the training that they’ve been working on, and it was clear they were able to put it into their races.”

The Hurricanes have only two meets remaining before the ACC Swimming & Diving Championships take place in Greensboro, N.C., in February.

“The key for us is to stay together and continue to build our confidence,” Kershaw said. “That’s going to come from the training, and putting that into competitions. As we do that, we just keep getting better and better. I’m looking for them to keep doing what they’re doing and continue to elevate the level they’re doing at.”