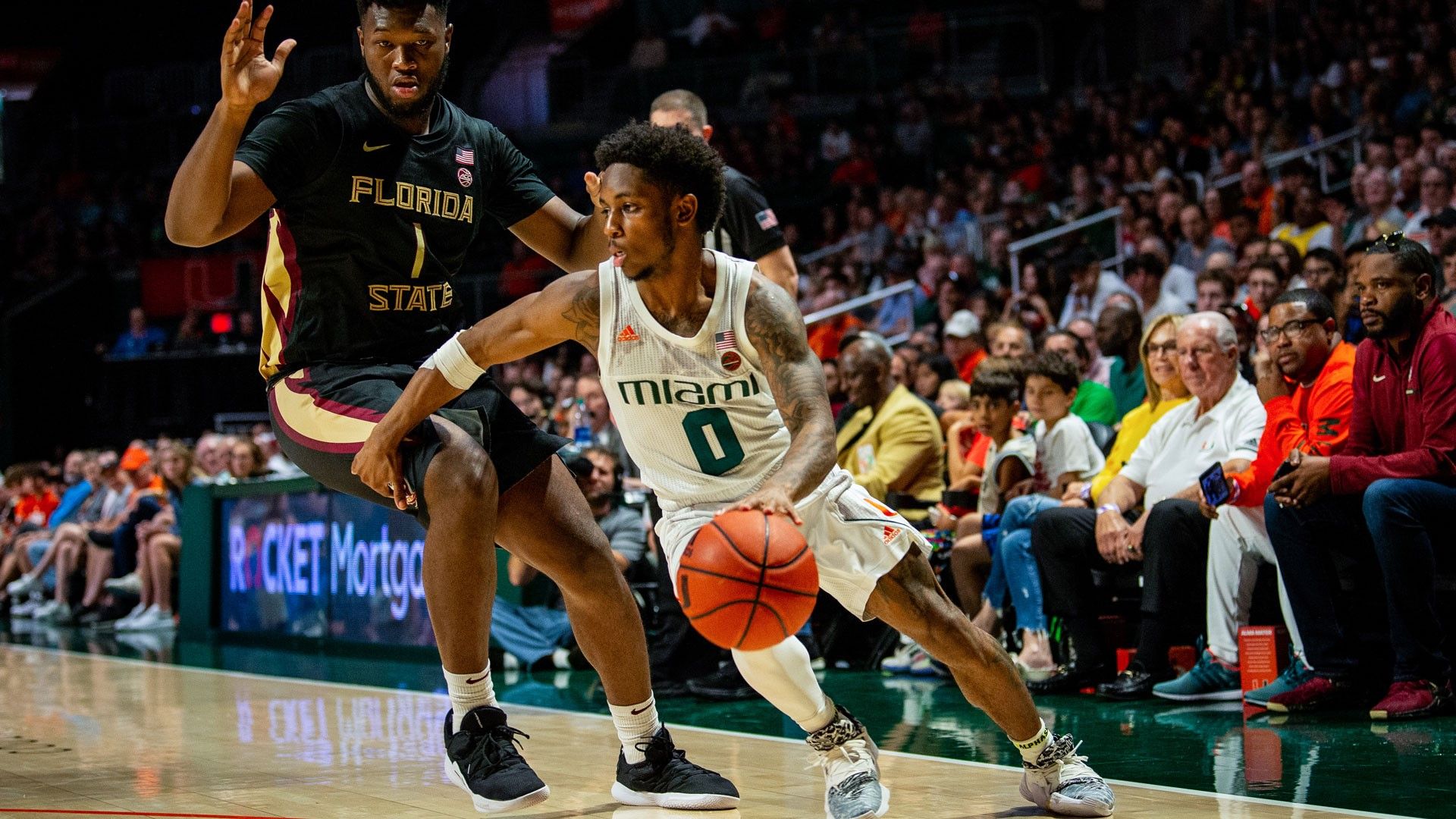 “I thought we did everything it took to win the game except win,” Miami head coach Jim Larrañaga said. “. . . We’ve been pretty darn good at the end of close games, finishing. Today, we weren’t able to close.”

Both teams shot 40 percent or below from the field and exactly 50 percent at the line, as well as committed eight-plus turnovers in a sluggish opening 20 minutes that was played within just a seven-point window.

The Hurricanes went on a 9-2 run, capped by a trio of free throws from senior guard Dejan Vasiljevic, in a span of 2:01 midway through the second half to take a 55-49 lead with 9:49 remaining. They upped their lead to a game-high nine, 65-56, with 5:20 left, this time after a fast-break layup by Vasiljevic.

The Seminoles then outscored Miami, 13-4, over the final 4:33 of regulation, including a game-tying 3-pointer by junior guard MJ Walker with 40 ticks left, to send the game to overtime.

Florida State took a 76-71 advantage, its largest lead of the day, with 1:27 to go in overtime, but Lykes countered with a 3-pointer to make it a two-point game just 12 seconds later. The Hurricanes, however, could not claw all the way back and fell just short of a top-10 triumph, dropping a four-point decision.

“I thought our defensive effort was terrific. I liked the way they hustled, challenged shots, challenged rebounds and pulled together as a team,” Larrañaga said. “I thought they did a great job of building a lead. Unfortunately, Florida State did a good job of forcing some turnovers and making some key shots down the stretch.”

Lykes’ 24 points came on 9-of-18 shooting, including a 6-of-10 clip from 3-point range in a career-high 42 minutes. He also blocked multiple shots in a game for the first time, plus surpassed Dwayne Collins for fifth place on Miami’s all-time ACC-only scoring list, now with 628 points.

Vasiljevic totaled 19 points, finishing 6-of-11 from the floor, 4-of-6 beyond the arc and 3-of-3 at the line in 40 minutes. Redshirt junior guard Kameron McGusty added 15 points on 6-of-10 shooting to go along with a career- and game-high six assists. Redshirt junior forward Sam Waardenburg tied a career best with a co-game-high 11 rebounds in a career-best 41 minutes..

Up next for the Hurricanes is a visit to Durham, N.C., where they face third-ranked Duke Tuesday night at 9 p.m., live on ESPN from Cameron Indoor Stadium.

MIAMI HURRICANES POSTGAME NOTES
– The Hurricanes moved to 37-48 all-time against Florida State, including 28-15 at home and 8-10 in Larrañaga’s tenure.
– Larrañaga, who entered the game with the 10th-most victories of any active Division I coach, is now 655-438 in 36 years as a head coach, including 185-104 in nine seasons at Miami.
– The Hurricanes are now 9-9 in overtime games under Coach L, including 6-5 in ACC play and 1-1 this season.
– For the 17th time in as many games this season, Miami used a starting lineup of Lykes, McGusty, Vasiljevic, Waardenburg and redshirt junior center Rodney Miller, Jr.
– Prior to Saturday, the Hurricanes were 6-0 in games decided by singles digits, including 4-0 in contests decided by five or fewer.
– Miami is now 10-0 when leading or tied at halftime and 0-7 when trailing through 20 minutes this season.
– This is the first time in 2019-20 the Hurricanes have lost when leading with two minutes left and just the 12th time in Larrañaga’s nine seasons they have done so.
– The Hurricanes had both a five-minute scoring drought and a 5-of-5 stretch from the floor in the first half.
– Miller surpassed 500 minutes played as a Hurricane.
– McGusty, who tallied his 42nd double-digit scoring performance, reached 50 steals in his career.
– Lykes recorded his 58th double-figure point total and his 14th 20-point performance.
– Along with setting career highs in minutes and blocks, Lykes matched his career best in made 3-pointers.
– Vasiljevic, who registered his 56th double-digit scoring total, eclipsed 1,100 points at Miami.
– Over the last three games, Vasiljevic has played 119 of a possible 126 minutes.
– Waardenburg, who eclipsed 350 points as a collegian, logged his fifth double-figure rebounding outing, all of which have come in 2019-20.
– The 11 rebounds set a new career high for Waardenburg in ACC play.
– After playing 11 total minutes in Miami’s last five games, freshman forward Anthony Walker saw 13 minutes of action Saturday.