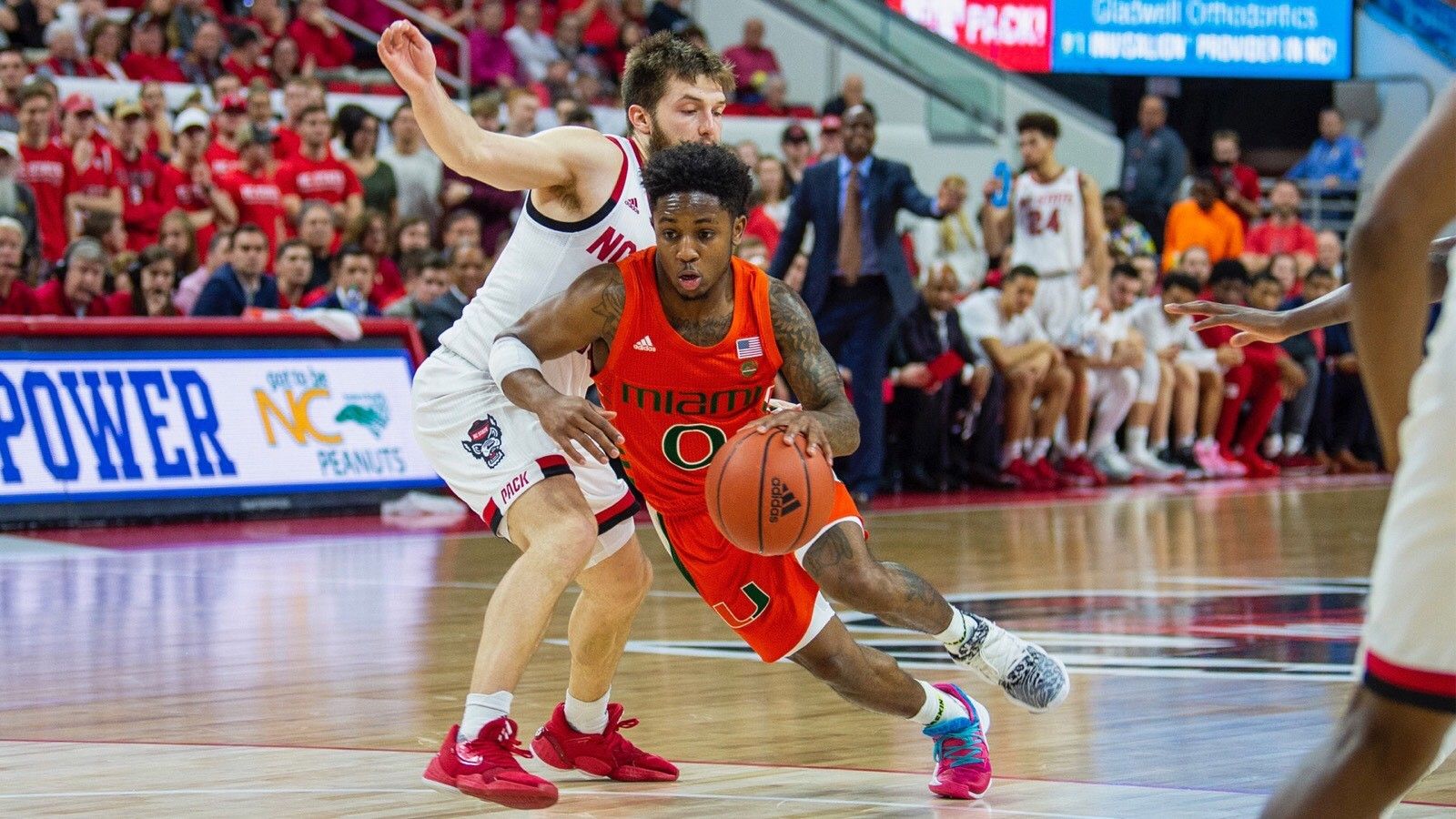 “When our two big guys get in foul trouble and without Keith Stone or Deng Gak, we just don’t have any depth to be able to match up with bigs. And they just dominated . . . inside scoring,” Miami head coach Jim Larrañaga said. “They had 16 interior first-half points in the paint, but we also fouled them a half a dozen times that led to free throws. So, we’ve got to figure out how to keep Rodney [Miller, Jr.] and Sam [Waardenburg] in the game at the same time, so that we can play three guards and rotate the guards.”

Miami scored the first four points of the second half to quickly pull back within four, but never got any closer, as the Wolfpack shot 64.3 percent (18-of-28) in the second stanza and the Hurricanes continued to battle foul trouble.

Lykes’ 20 points came on a 6-of-14 clip from the floor and a perfect 7-of-7 tally from the stripe, while he added four rebounds, equaling his season and ACC highs. Senior guard Dejan Vasiljevic totaled 16 points in 39 minutes and went 6-of-7 at the line, missing his first free throw of the season, but setting ACC highs in both makes and attempts.

Redshirt junior center Rodney Miller, Jr., set career highs in points (16), made field goals (six) and made free throws (four), finishing 6-of-8 from the field and 4-of-5 at the line.

NC State went 9-of-20 (45.0 percent) on 3-point attempts, the third-best mark Miami has allowed this year, and held the Hurricanes to just 3-of-16 shooting (18.8 percent) for their second-lowest clip of the season.

The Hurricanes now return home to Coral Gables, Fla., where they host ninth-ranked Florida State Saturday at 1 p.m. at the Watsco Center, live on ACC Network.

MIAMI HURRICANES POSTGAME NOTES
– The Hurricanes moved to 11-14 all-time against NC State, including 4-8 on the road and 7-7 in Larrañaga’s tenure.
– Larrañaga, who entered the game with the 10th-most victories of any active Division I coach, is now 655-437 in 36 years as a head coach, including 185-103 in nine seasons at Miami.
– For the 16th time in as many games this season, Miami used a starting lineup of Lykes, Miller, Vasiljevic, redshirt junior guard Kameron McGusty and redshirt junior forward Sam Waardenburg.
– Miami is now 10-0 when leading or tied at halftime and 0-6 when trailing through 20 minutes this season.
– In addition to 3-point percentage, as aforementioned, Miami logged its second-lowest marks of the year in made field goals (20) and field goal percentage (36.4).
– Miami also had a season low in assists (three) and matched its season low in steals (three) and blocks (two).
– The Hurricanes’ 25 points in the first half tied for their least in a session this season, including solely their fewest before the break.
– Miami’s eight made field goals and 29.6 percent clip (8-of-27) from the floor in the first half were both its second-lowest marks in a half this year and its lowest in the opening 20 minutes.
– NC State redshirt senior guard CJ Bryce returned to action after missing the past four games due to injury, but Miami held the Wolfpack’s leading scorer to six points.
– After making 33 straight free throws dating back to the 2018-19 finale, including his first 28 of this season, Vasiljevic missed his opening attempt Wednesday night.
– Lykes, who eclipsed 2,250 minutes played at Miami, notched his 57th double-figure point total and 13th 20-point showing.
– Lykes also passed Dwayne Collins and Sheldon McClelland for third place on Miami’s ACC-only career made free throws list, now with 143.
– McGusty surpassed 200 rebounds as a collegian.
– Vasiljevic, who tallied his 55th double-digit scoring performance, ended a stretch of 73 minutes and 45 seconds of consecutive court time over three games with 14:06 left in the first half.
– Vasiljevic, who left the court for just 19 seconds at that 14:06 mark, also played a total of 107 minutes and six seconds over a span of 107 minutes and 25 seconds.
– In addition, Vasiljevic became the first Hurricane to play 79 minutes in a two-game stretch, excluding overtime affairs, since Shane Larkin did so in Miami’s ACC Tournament semifinal and championship victories on March 16 and 17, 2013.
– Miller, whose eight points in each half tied his highest total in any session as a Hurricane, reached double-digit points for the fourth time.
– Additionally, Miller reached 100 rebounds in his career.