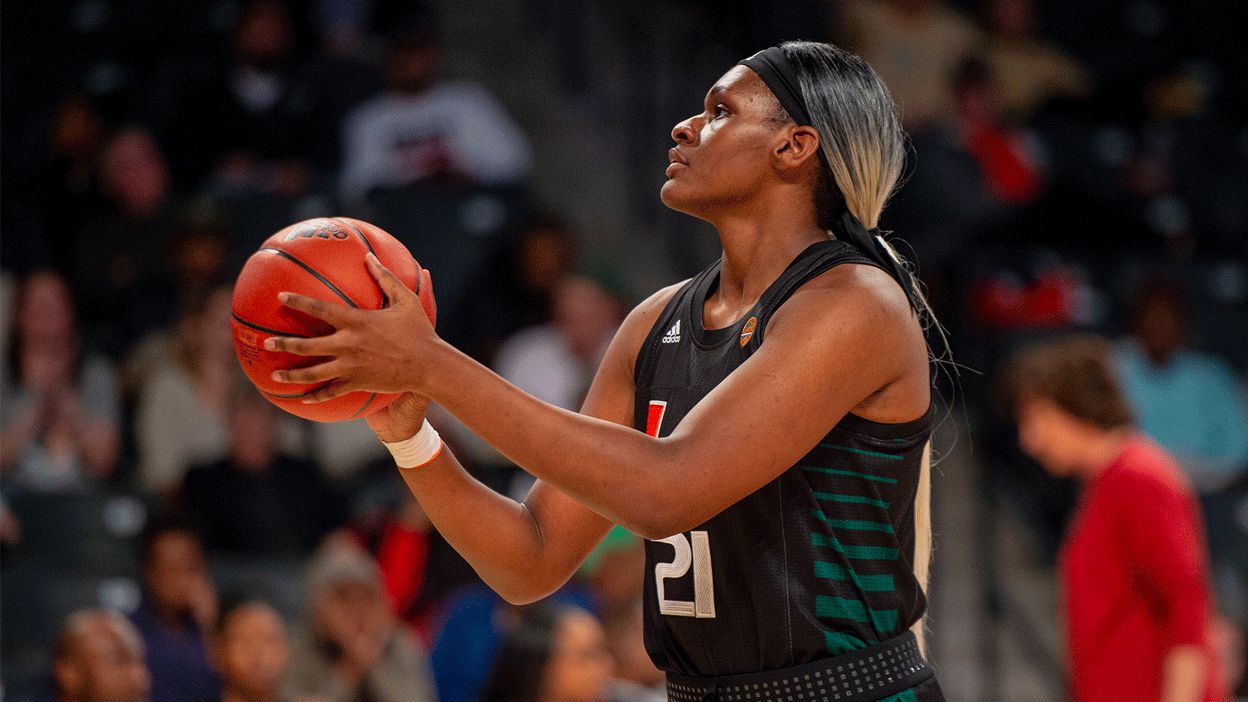 She knew that as a freshman, she’d have to prove herself, especially given that she’d be playing alongside the preseason ACC Player of the Year, fellow forward Beatrice Mompremier.

Still, as a four-time state champion and the winner of multiple Player of the Year awards in her native Virginia, Jackson has always welcomed challenges.

She’s never shied away from any of the responsibilities placed on her shoulders, whether they were put there by her coaches on the basketball court or by her family at home.

Her willingness to do more and make her presence felt did more than help her build a stellar high school basketball resume – it helped make her a steadying, calming force to her two younger siblings, Brian and Jada, both of whom have special needs, both of whom Jackson has helped care for for much of her life and both of whom are her inspiration.

“My youngest sister, Jada, she’s 15 and we found out around the age of one that she was blind. … She just brings positivity everywhere she goes. She’s practically the light for me sometimes. I get down on myself and she’s like, ‘Big Sister, hey!’ To hear her cheering for me at my AAU or high school games, was special. Me and her, we have a pretty good connection,” Jackson said. “My little brother we found out he was blind and autistic, too. … He doesn’t really get to sit at my games, but there was one game where my parents surprised me and brought him to one of my games and I started crying during warm-ups because he never gets to come to my games.

“Really, for me, I play basketball because I want to make it big and help them in life.”

Jackson is hoping her time as a Hurricane will help her reach that goal.

A former star at Princess Anne High School in Virginia Beach, the 6-foot-3 forward received offers from the likes of Virginia Tech, Florida and DePaul, among others, before committing to Miami and Hurricanes coach Katie Meier.

One of the biggest reasons Jackson said she felt comfortable joining the Hurricanes was because of how Meier, from the start, made it clear she’d have the necessary support to accomplish her own goals while helping move the Hurricanes forward.

“I just felt a connection with her when she came in for my home visit. Another coach asked me what I wanted to do as a freshman for her team and I said, ‘I want to be Freshman this, Freshman that. I want to be impactful my first year’ and they were like, ‘Sweetie, you’re reaching too high,'” Jackson said. “So then when I met with Coach Meier, I just told her I wanted to help the team as best I could and she said, ‘No. What do you want? What are your individual goals? What do you want to do on our team?’ and I knew she was really a coach that wanted to help me and wanted to listen to what I had to say. That was the first start of my connection with her.”

Now at the midpoint of her freshman year, Jackson has been called on in an unexpected way.

With Mompremier sidelined by a foot injury during a stretch of crucial conference games, Jackson has been called on to not only log more minutes, but to give the Hurricanes both a scoring boost and a defensive presence.

And while things didn’t go Miami’s way against top-10 opponents Florida State and Louisville last week, Jackson was a bright spot in both games, putting together a 14-point, 10-rebound effort against the Seminoles and scoring a team-high 13 points against the Cardinals. She added another four points, four rebounds, three blocks and a steal in Sunday’s win over Syracuse.

Those performances have been encouraging, her coaches say.

“She was so good when she first arrived and we were really excited about her. She was better than we anticipated and that rarely happens, that you get a big-time recruit and then they’re better than you thought. I always knew she’d be a great defender and a great rebounder and she was hitting putbacks and really doing some good work early on, when things were really simple,” Meier said. “And then, it happens to all freshmen, things get complicated and they have to think and act and there’s a pause and that pause kind of got to her. It was just a bunch of repetition and now she’s back … the game seems simple again for her and that’s helping.”

Added assistant coach Octavia Blue, who works with Miami’s post players, “She’s done a tremendous job. Just think about what she’s had to do. She had to step in and play a lot of minutes against Georgia Tech. Then she had a double-double against FSU. … I think she really prepared herself well during the week and it showed on the court.”

For Jackson, the focus now is on continuing to improve, even after Mompremier returns.

And she knows that for the rest of the season and beyond, her cheering section is behind her.

“The whole reason I’m playing right now is for my family. Sometimes, I get down on myself. I’ll get tired or wonder if I want to play, but you know a mother’s intuition? My mom always seems to call every time I doubt myself,” Jackson said. “And it’s like, ‘Hey Baby, how are you doing? How are you feeling?’ and I’m like, ‘This is why I’m playing. I’m going to be okay.'”