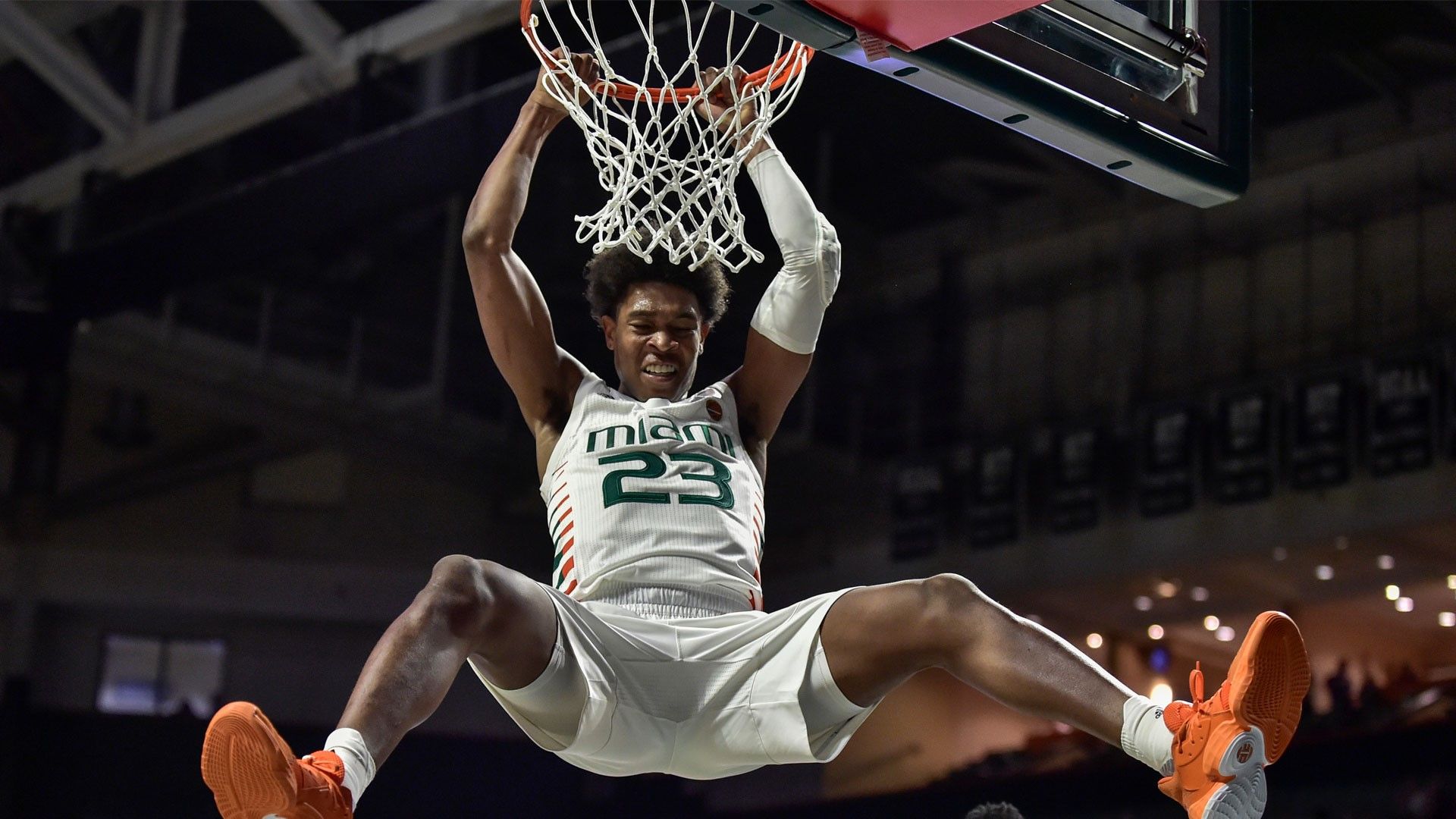 CORAL GABLES, Fla. – The University of Miami men’s basketball team wrapped up its non-conference slate in style Saturday afternoon at the Watsco Center, turning in a resounding 91-60 victory over Coppin State.

Redshirt junior guard Kameron McGusty paced a quartet of Miami (8-3, 0-1 ACC) 15-point scorers with a career-high 28, as the Hurricanes logged their largest win since Nov. 22, 2018, and set a program record with 18 made 3-pointers.

“I think it was a very unusual game; the guys just had to make plays,” Miami head coach Jim Larrañaga said. “We didn’t really run much offense as much, as just attack and take what the defense gave us. They gave us a lot of opportunities to shoot threes . . . and we finished the pre-Christmas schedule with four wins in a row, which is very nice.”

The Hurricanes held the Eagles scoreless for the opening 5:23 and allowed just one field goal in the first 9:55, taking a 9-0 lead that ballooned to 19-3.

Miami, behind 14 points from senior guard Dejan Vasiljevic, went on to take a 34-20 edge into the locker room after holding Coppin State to 21.9 percent (7-of-32) shooting.

Early in the second half, McGusty went on a personal 11-2 run, featuring eight unanswered points and three consecutive 3-pointers, in just 2:02 to extend Miami’s edge to 50-24 with 15:49 to go.

Miami pushed its advantage as high as 40 and eventually earned the 31-point decision after posting its top point total since Nov. 13, 2018, against Stephen F. Austin (96).

McGusty’s 28-point outing came on 9-of-11 shooting from the floor, including 5-of-7 from deep, and a 5-of-6 mark from the line. The nine makes tied a career high and the five 3-point makes set a new top mark for the Katy, Texas, native, who added five rebounds and a season-best three steals. In the second half alone, he scored 22 points and hit all five of his 3-pointers.

“I think he was very ready to play and very ready to shoot the ball,” Larrañaga said of McGusty. “When you make a three and then the same shot materializes the very next time down the court, well of course you’re going to look for it again and when you make it you feel like ‘Oh I’ve got the hot hand.’ Then you hit another and another. He made [three] in a row and that not only gets him going, but the whole team.”

Vasiljevic finished with 21 points went 8-of-8 from the stripe, setting career highs in both makes and attempts. Lykes added 16 points on 5-of-8 shooting and a season-high-tying four rebounds.

Redshirt junior forward Sam Waardenburg amassed his first collegiate double-double, finishing with a career-high 15 points and career-high-tying 11 rebounds. He also set a new high in made field goals and tied his top mark in made 3-pointers, finishing 6-of-8 and 3-of-5, respectively.

In addition to setting the program record for 3-point makes, Miami also set a new high in attempts with 38, finishing a stellar 47.4 percent from long range. In addition, Larrañaga’s team went 17-of-20 (85.0 percent) from the stripe.

The Hurricanes, who have now concluded non-conference action, will resume ACC play Dec. 31 at 4 p.m. against Clemson at Littlejohn Coliseum, live on ACC Network, in Clemson, S.C.

MIAMI HURRICANES POSTGAME NOTES
– The Hurricanes moved to 3-0 all-time against Coppin State, including 3-0 at home and 1-0 in Larrañaga’s tenure.
– Larrañaga, who entered the game with the 10th-most victories of any active Division I coach, is now 653-434 in 36 years as a head coach, including 183-100 in nine seasons at Miami.
– For the 11th time in as many games this season, Miami used a starting lineup of Lykes, McGusty, Vasiljevic, Waardenburg and redshirt junior center Rodney Miller, Jr.
– Thirteen of the first 17 shots in the game, including all seven by Miami, over the course of the first 5:40 of action came from beyond the 3-point line.
– The Hurricanes did not make their first shot inside the arc—on their third such attempt—until a tip-in by Waardenurg with 13:23 left in the opening half.
– Coppin State did not make its first shot inside the arc—on its eighth try—until just 10:05 remained before the break.
– The last time Miami allowed 20 or fewer points in a half was Nov. 22, 2018, in the first frame against La Salle (18) in Fullerton, Calif., which was also the last time they won by 30-plus points (36).
– Vasiljevic, who eclipsed 350 made field goals and 50 steals as a Hurricane, registered his 51st double-digit point total and ninth 20-point performance.
– Waardenburg, who tallied a double-digit scoring output for the 10th time, surpassed 300 points in his career.
– McGusty, who moved past 750 points and reached 150 free-throw attempts as a collegian, notched his 37th double-figure scoring total and ninth 20-point game.
– Lykes, who played in his 75th game and reached 200 made free throws at Miami, scored 10-plus points for the 53rd time.
– Guard Harlond Beverly compiled the first five-assist outing of his career, logging six, and became the first Miami freshman to notch five-plus in a game since Lykes did so on Jan. 31, 2018, versus Pittsburgh.
– The prior program record for made 3-pointers in a game was 17, set Jan. 27, 2018, in an overtime contest at Florida State.
– The previous program record for 3-point attempts in a game was 36, set Nov. 27, 2010, versus FGCU.
– Miami last had four 15-point scorers on Nov. 13, 2018, against Stephen F. Austin.
– The Hurricanes have now show 85.0 percent or better from the free-throw line three times this season.
– Three different Hurricanes have combined for four double-doubles this season, with Vasiljevic and Waardenburg having one apiece and McGusty owning two.
– McGusty’s 28 points points matched the top total by a Miami player this year, tying Lykes’ mark versus Illinois.
– Waardenburg’s 11 rebounds tied the highest mark by a Hurricane this season, which Waardenburg also totaled in the matchup against Florida Atlantic.
– Saturday marked the second time this season two Hurricanes have scored 20-plus points in a game, joining the victory at Illinois when Lykes (28) and Vasiljevic (20) did so.