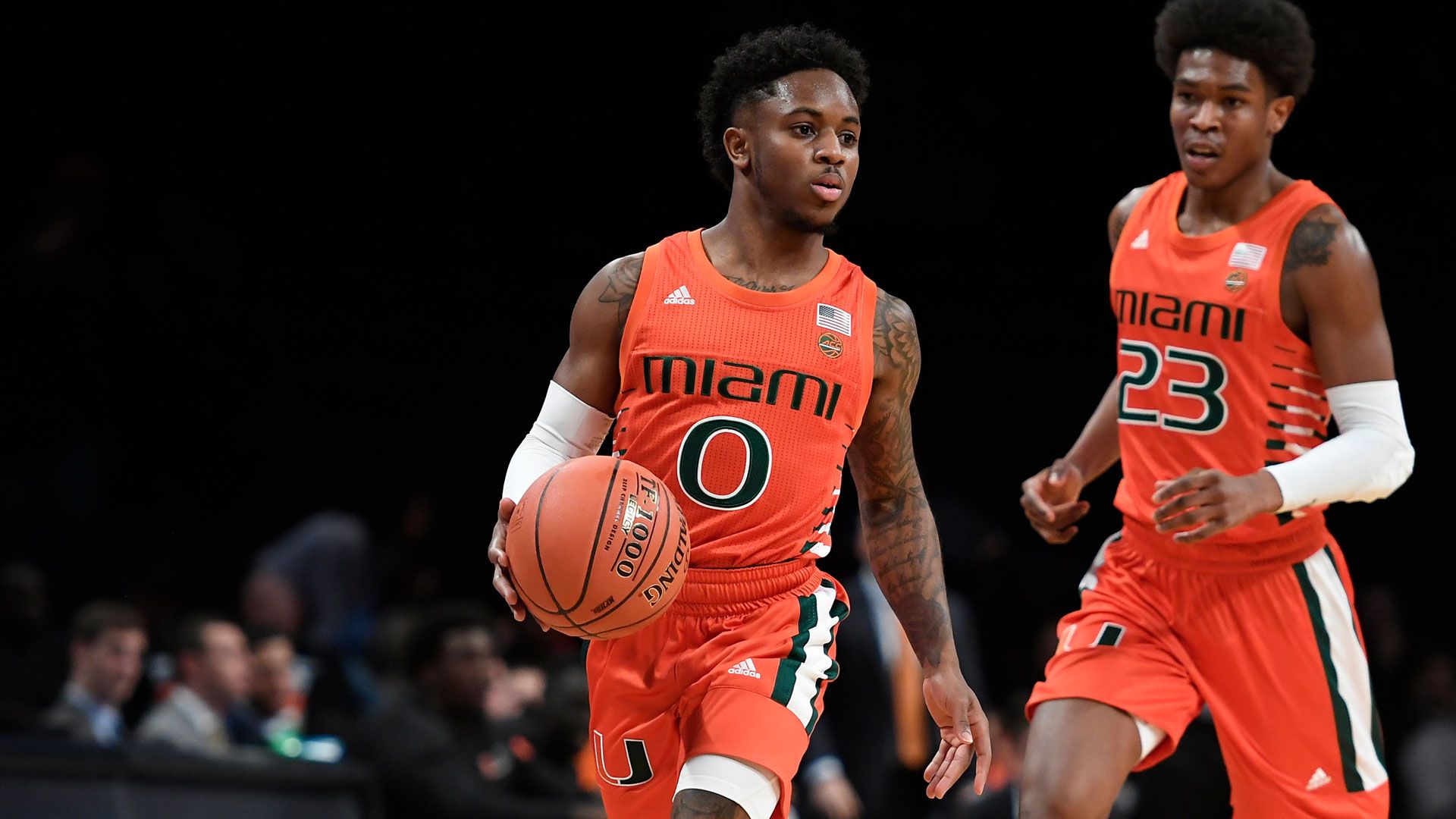 “Well, I told the team at halftime, to win the game, we were going to have to play great,” Miami head coach Jim Larrañaga said. “It was a great game. We had played a great first half, but Temple was playing great as well, so we needed a lot of guys to step up and make plays, and they did.”

The Hurricanes made four of their first five shots, with the first two coming from New York native Rodney Miller, Jr., a redshirt junior center, to take an early 9-3 edge just 2:42 into the game.

The Hurricanes shot 53.1 percent (17-of-32) in the opening 20 minutes, with redshirt senior Keith Stone posting a 4-of-5 mark to pace the team with nine points. Miami, which did not trail in the first half, also logged a 24-14 advantage in paint points, but the Owls scored 11 on the fast break and held the Hurricanes to none.

After closing the first half with five straight points, Temple opened the second on a 9-2 run to take a 47-41 lead. Miami, however, countered with seven consecutive points to go back in front by one with 15:33 to play.

A putback basket by Miller put Miami ahead with 1:08 to go and he added another point from the line with 54 ticks left to make it 76-74. Temple then regained the lead on its ensuing possession on a corner 3-pointer by junior forward De’Vondre Perry with 34 seconds left.

Following stops by both teams on the following possessions, Lykes drew a foul on a jump-shot with 4.4 on the clock and calmly sank both free throws to give Miami the lead for good after senior guard Quinton Rose’s shot at the buzzer sailed off the mark.

“At the end of a close game . . . you’ve got to give yourself a chance to make a shot and, if you miss it, get an offensive rebound. And that happened, where we missed the shot and Rodney Miller tipped it in. That was a huge bucket late,” Larrañaga said. “At the defensive end of the floor, you don’t want to . . . put guys on the foul line, which allows them then to set their defense and [we did not foul]. Basically, you’ve got to stay poised. In the game plan every game, the last comment that the coaches make is ‘poise down the stretch’ and we had poise tonight.”

Along with his team high in points, Lykes added a season-best six assists and career-high five steals, en route to claiming MVP honors.

Redshirt junior guard Kameron McGusty recorded a double-double with 12 points and a team-high 10 rebounds, the latter matching his career bests, while Stone finished with 13 points after going 4-of-5 from the field and 5-of-7 at the line.

Miller had 11 points and a career-high-tying boards, while senior guard Dejan Vasiljevic, who eclipsed 1,000 points in the win, posted 11 points and eight rebounds, giving Miami five double-digit scorers for the second game in a row.

Perry paced all scorers with 18 points, finishing 4-of-6 from beyond the arc for the Owls, and Rose notched 14 points, but Miami held him to four on 1-of-5 shooting in the second half.

The Hurricanes also totaled a 42-24 edge in paint points and had more made free throws (14) than Temple had attempts (12).

Miami will now return home to face Coppin State Saturday at 2 p.m. at the Watsco Center, live on ACC Network, in its final game of the non-conference slate.

MIAMI HURRICANES POSTGAME NOTES
– The Hurricanes moved to 3-2 all-time against Temple, including 3-0 at neutral sites and 2-0 in Larrañaga’s tenure.
– Tuesday marked the second consecutive meeting between the Hurricanes and Owls at an NBA arena in New York, as they last met in the 2015 NIT semifinals at Madison Square Garden, a 60-57 Miami win.
– Larrañaga, who entered the game with the 10th-most victories of any active Division I coach, is now 652-434 in 36 years as a head coach, including 182-100 in nine seasons at Miami.
– Miami is now 8-10 at NBA arenas—seven venues across eight different seasons—under Larrañaga, including 2-3 at the Barclays Center.
– For the 10th time in as many games this season, Miami used a starting lineup of Lykes, McGusty, Miller, Vasiljevic and redshirt junior forward Sam Waardenburg.
– Vasiljevic eclipsed 1,000 points—the 40th Hurricane to do so and the ninth under Coach L—on a jump-shot with 9:32 left in the first half.
– Vasiljevic registered his 50th double-figure point total and surpassed 300 rebounds as a collegian.
– Additionally, Vasiljevic moved past Robert Hite for sole possession of fourth place on Miami’s career made 3-pointers list, now owning 229.
– Miller eclipsed 100 points at Miami.
– Lykes recorded his 52nd double-digit scoring game and 15th five-assist outing.
– Stone tallied his 20th double-figure scoring output, including his first as a Hurricane.
– McGusty notched his 36th double-digit point game and second double-double.
– Miller registered his third double-figure point output.
– Waardenburg set a career best with a game-high three blocked shots.
– Stone became the first Hurricane to foul out of a contest this season, doing so with 2:10 remaining.
– Miami’s back-to-back games with five players scoring 10-plus points came after a stretch of 36 contests in which it did not do so even once.
– The Hurricanes used fewer than nine players (eight) for the first time all season.
– Miami has won at least seven of its first 10 games in five of the past six campaigns, with 2018-19 being the lone exception.