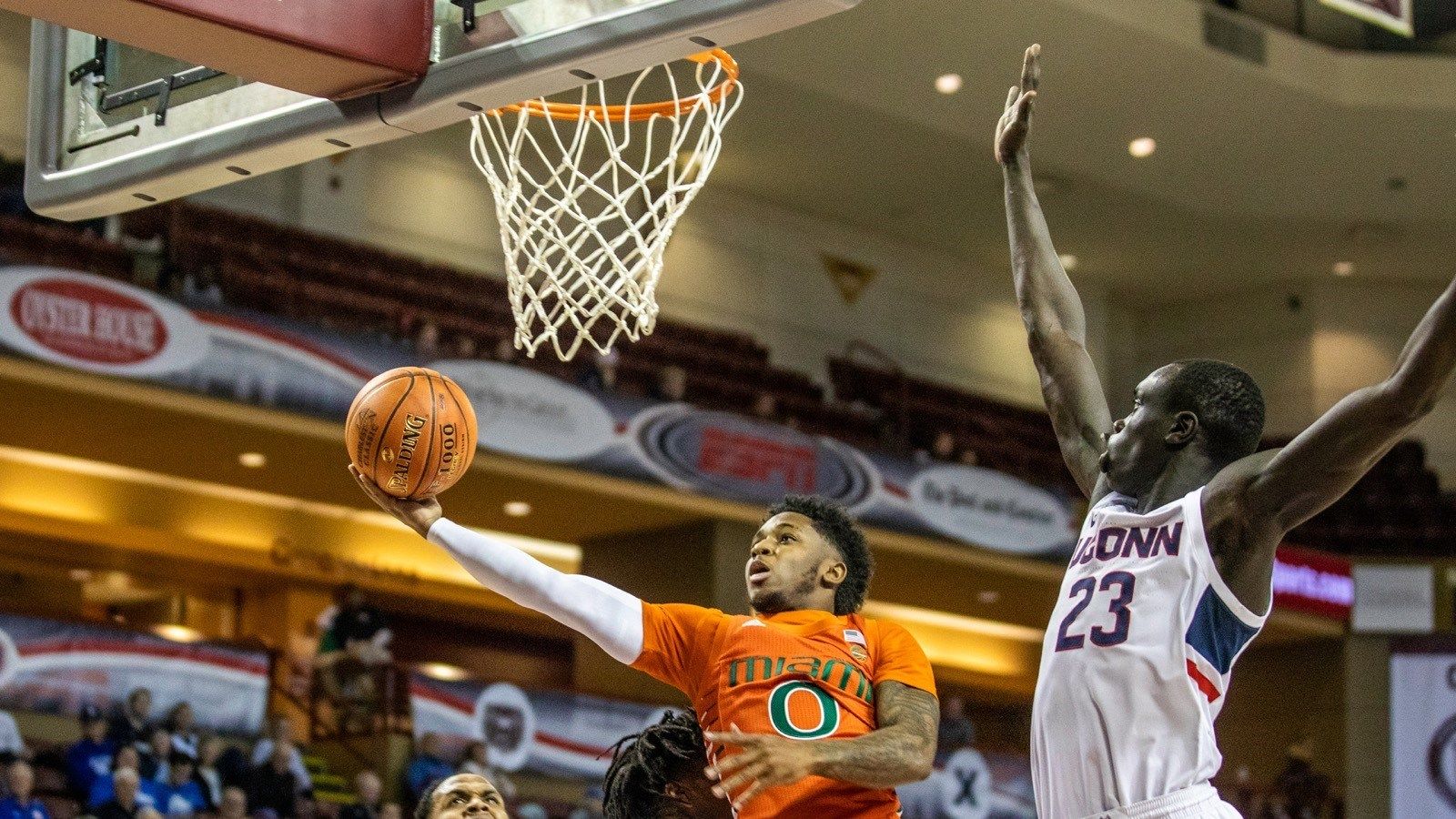 Miami (4-3, 0-1 ACC) was unable to overcome a strong mid-game shooting barrage by the Huskies in the setback at TD Arena.

Neither team led by greater than four points for the majority of the first half, but the Huskies made eight of their final nine shots before the break, while Miami missed five of its last six. With the late burst, UConn (4-2, 0-0 AAC) took a 36-27 advantage into the locker room.

The Huskies outscored Miami by 16 in the second half to earn the 25-point victory, the Hurricanes’ largest defeat since a 30-point loss at No. 3/2 Duke on March 2.

UConn committed just six turnovers and went 9-of-12 (75.0 percent) from the free-throw line, while Miami had twice as many giveaways and finished 1-of-2 at the stripe.

The Hurricanes will now have seven days without a game before taking on Illinois at the State Farm Center in Champaign, Ill., Dec. 2 at 7 p.m. ET in the Big Ten/ACC Challenge, live on ESPN2.

MIAMI HURRICANES POSTGAME NOTES
– The Hurricanes are now 8-17 all-time against UConn, including 0-2 at neutral sites and 0-1 in Larrañaga’s tenure.
– Sunday marked just the third time Miami has played the Huskies in a non-BIG EAST game, with UConn winning each of those matchups.
– Larrañaga, who entered the game with the 10th-most victories of any active Division I coach, is now 649-434 in 36 years as a head coach, including 179-100 in nine seasons at Miami.
– Sunday was the first time Coach L has faced UConn since leading No. 11-seed George Mason past the top-seeded Huskies, 86-84, in overtime on March 26, 2006, in the NCAA Tournament Elite Eight in Washington, D.C.
– Miami moved to 8-2 all-time in Charleston Classic play, including 7-2 in the tournament’s bracketed games.
– For the seventh time in as many games this season, Miami used a starting lineup of Miller, Vasiljevic, junior guard Chris Lykes, redshirt junior guard Kameron McGusty and redshirt junior forward Sam Waardenburg.
– Vasiljevic recorded his 47th double-figure scoring output as a Hurricanes, as well as eclipsed 950 points.
– Miller posted the second double-digit scoring game of his career, both of which have come this season.
– McGusty, who tallied a career- and team-high four assists, surpassed 1,500 minutes played as a collegian.
– Freshman forward Anthony Walker moved past 100 minutes played in his young career.
– Redshirt sophomore forward Deng Gak played a career-high 20 minutes for the Hurricanes.
– Lykes finished with a single-digit point total for the first time since March 5, snapping a nine-game streak.
– UConn redshirt freshman forward Akok Akok blocked six shots in the game, becoming the first Miami opponent with six-plus since Minnesota’s Reggie Lynch logged seven on Nov. 29, 2017.
– The Huskies made 10 of 11 shots in a span of 9:04, featuring the last 7:36 of the first half and the first 1:28 of the second.
– Miami’s opponent has shot 50-plus percent from the floor in both halves all three of its defeats this season, while that has not happened in any of its four wins.
– This is just the second time—first in the regular season—in Larrañaga’s tenure that the Hurricanes have dropped back-to-back games by 20-plus points, joining the final two games of the 2016-17 season against sixth-ranked North Carolina (78-53) in the ACC Tournament in Brooklyn, N.Y., and Michigan State (78-58) in the NCAA Tournament.