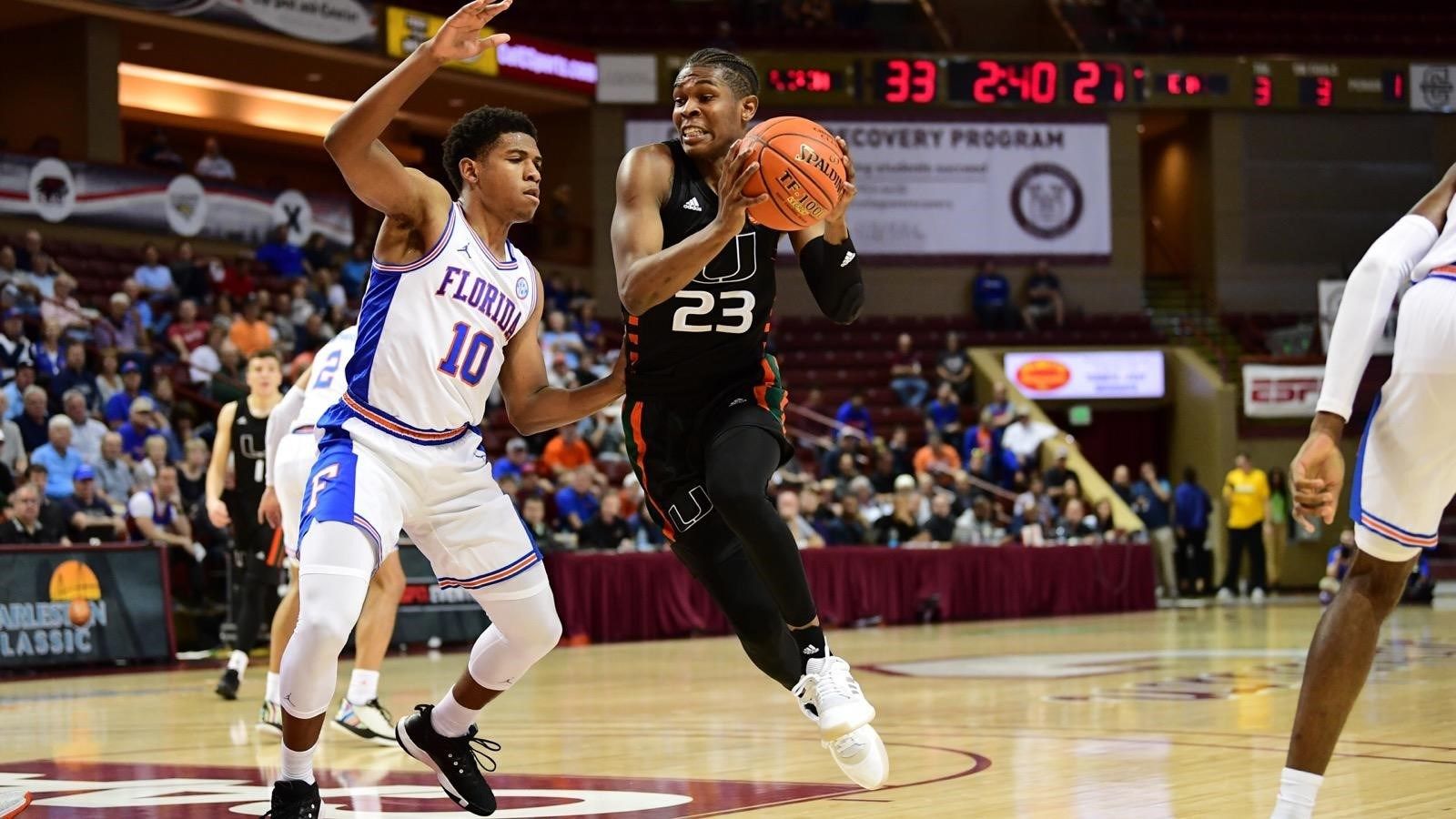 CHARLESTON, S.C. – The University of Miami men’s basketball team fought out of a 12-point hole to pull even against Florida Saturday afternoon, but ultimately dropped a 78-58 decision at TD Arena.

“Florida is a very well-balanced team, both offensively and defensively. We were really having a hard time stopping them,” Miami head coach Jim Larrañaga said. “So, we needed to keep scoring and keep pace, which we did [early] in the second half—actually tied the game up after trailing by 12—but they were able to pull away because we stopped making shots.”

The Hurricanes jumped out to an early 14-8 lead, with redshirt senior forward Kerry Blackshear, Jr., scoring all eight points for Florida (4-2, 0-0 SEC). The Gators, however, countered with 17 straight points to go up by 11, as Miami went scoreless for over six minutes.

Miami answered back with a 10-3 run, including scoring eight straight points, to cut its deficit to four, 28-24, with 5:38 left in the half. Florida went on to take a five-point advantage, 38-33, into the break after a buzzer-beating jump-shot by redshirt junior guard Kameron McGusty, his second of the year for Miami.

The Gators, who entered the day shooting 25.7 percent on 3-pointers, made seven of their first 10 shots from long range and finished the half 7-of-12 (58.3 percent). Blackshear, who entered at 2-of-9 on the year, connected on all three of his attempts in the opening 20 minutes.

Miami came all the way back to tie the score at 45 with 15:48 to play after making four straight shots, including back-to-back 3-pointers by McGusty and Lykes to cap the stretch.

Florida responded again, though, tallying a 19-4 run to go ahead by a then-game-high 15 points with 7:39 on the clock, as the Hurricanes again went scoreless for six-plus minutes. Miami was unable to come back a second time and dropped a Charleston Classic outing for the first time in nine tries.

“We stopped taking good shots and we started forcing some things offensively, and when you do that not only do you not score, but you give your opponent a chance to score before you get your defense back,” Larrañaga said. “Florida took advantage of every one of our mistakes and every turnover ended up leading to an easy basket.”

McGusty was the lone Hurricane to join Lykes in double figures, as the Katy, Texas, native finished with 10 points and a career-high-tying three assists to pace the team.

Blackshear led all players in both points (20) and rebounds (11) to finish with a double-double. Freshman guard Scottie Lewis posted 13 points, while sophomore forward Keyontae Johnson had 12 and freshman guard Ques Glover registered 11 for the Gators. In addition, sophomore guard Andrew Nembhard added eight points and a game-high nine assists, the most by a Miami opponent since Syracuse’s Tyus Battle had the same total on Jan. 24, 2019.

The Hurricanes will now meet UConn or No. 18/21 Xavier Sunday at 1 p.m., 3 p.m. or 3:30 p.m. in the Charleston Classic third-place game, live on to-be-determined channel within the ESPN family of networks.

MIAMI HURRICANES POSTGAME NOTES
– The Hurricanes are now 24-47 all-time against Florida, including 0-3 at neutral sites and 2-2 in Larrañaga’s tenure.
– Larrañaga, who entered the game with the ninth-most victories of any active Division I coach, is now 649-433 in 36 years as a head coach, including 179-99 in nine seasons at Miami.
– Miami fell to 8-1 all-time in Charleston Classic play, including 7-1 in the tournament’s bracketed games.
– For the sixth time in as many games this season, Miami used a starting lineup of Lykes, McGusty, redshirt junior center Rodney Miller, Jr., senior guard Dejan Vasiljevic and redshirt junior forward Sam Waardenburg.
– From the second half of Miami’s game against Quinnipiac through the first half of its matchup with Florida, an 80-minute stretch also featuring Thursday’s victory over Missouri State, the Hurricanes shot 53.2 percent (25-of-47) from 3-point range.
– Just six games into his third season, Lykes surpassed both 900 points and 300 made field goals as a Hurricane, as well as recorded his 49th double-digit scoring total.
– Waardenburg moved past 200 rebounds and reached 1,250 minutes played as a collegian.
– Vasiljevic eclipsed 2,250 minutes played in a Miami uniform.
– Miller surpassed 250 minutes played in his career.
– McGusty, who reached 50 assists as a collegian, totaled his 33rd double-figure point total.
– Blackshear is just the second player to tally 20-plus points against Miami this season, joining Louisville’s Jordan Nwora, who had 23.
– In both of Miami’s defeats this year (Florida and Louisville), its opponent has shot over 50.0 percent from the floor in both halves, while that has not happened in any of its four wins.