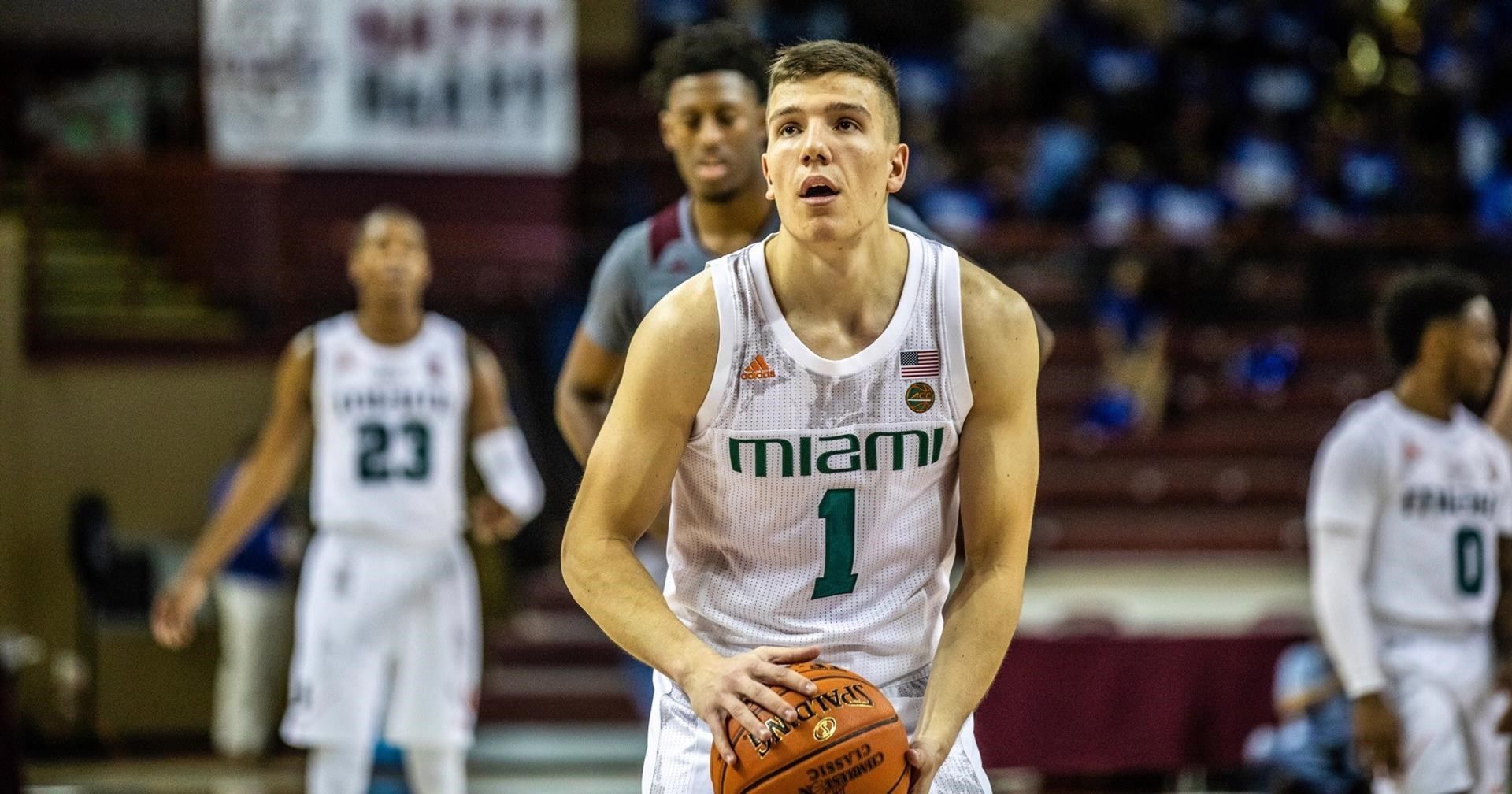 CHARLESTON, S.C. – Behind 55 points from its starting backcourt trio, the University of Miami men’s basketball team posted a 74-70 win over Missouri State in the opening game of the Charleston Classic.

“DJ is one of the best shooters I have ever coached. I am more surprised if he ever misses,” Miami head coach Jim Larrañaga said. “He is someone that, when he releases, you think it is going in. That is when he is shooting a three, a two or a free throw. He is just an outstanding shooter.”

After back-and-forth basketball through the first 10 minutes, the Hurricanes used a prolonged 19-6 run to take an 11-point advantage, 32-21, with 3:24 left before the break.

The stretch featured four 3-pointers, including two from Vasiljevic, and a trio of free throws after redshirt junior guard Kameron McGusty got fouled on a long-range shot. Miami, behind 13 points on 5-of-7 shooting from Vasiljevic, went on to take a 38-30 edge into the locker room.

Missouri State answered with 12 straight points in a span of 2:15 to cut its deficit to six, 64-58, with 6:38 to go. The Bears eventually cut Miami’s lead to two with 1.8 seconds on clock, but Vasiljevic hit a pair of free throws with 1.2 ticks left to seal the Hurricanes’ fourth straight win.

Vasiljevic, who hit nine of his first 11 shots and set a career high in made field goals, was joined in double figures by McGusty and junior guard Chris Lykes, who posted 19 and 11, respectively. Redshirt junior center Rodney Miller, Jr., notched eight points and a team-high eight rebounds in the victory.

Da Silva finished with a game-best 17 rebounds, the most by a Miami opponent since Georgia Tech’s Gani Lawal had 18 on Feb. 10, 2010. Overall, the Bears registered a 45-25 edge on the glass.

“The first thing is we made a point of emphasis to rebound; we knew Missouri State was an outstanding rebounding team. Unfortunately we were not able to keep them off of the offensive boards,” Larrañaga said. “They got 20 offensive rebounds, but fortunately we were able to counteract that with a lot of good offense from a bunch of different guys. We were able to maintain a lead throughout the second half. I don’t think they ever took a lead in the second half, so that was good.”

Despite Missouri State’s rebounding edge and both teams finishing within one percent of each other from the floor, the Hurricanes’ long-range shooting proved to be the difference. Miami went 9-of-22 (40.1 percent) from deep, while the Bears posted a 4-of-15 (26.7 percent) clip.

Up next for the Hurricanes is a matchup with either Florida or St. Joseph’s Friday at noon in the Charleston Classic semifinals, live on ESPN2 or ESPNU.

MIAMI HURRICANES POSTGAME NOTES
– The Hurricanes are now 2-0 all-time versus Missouri State, including 1-0 at neutral sites and 2-0 in Larrañaga’s tenure.
– Larrañaga, who entered the game with the 10th-most victories of any active Division I coach, is now 649-432 in 36 years as a head coach, including 179-98 in nine seasons at Miami.
– With the victory Thursday, Larrañaga tied Cliff Ellis for the No. 20 on the all-time wins list by an ACC coach while in the league (179).
– Thursday marked just the fifth time in Larrañaga’s tenure the Hurricanes have tipped off before noon and the team is now 4-1 in such contests.
– Miami moved to 8-0 all-time in Charleston Classic play, including 7-0 in the tournament’s bracketed games.
– For the fifth time in as many games this season, Miami used a starting lineup of Lykes, McGusty, Miller, Vasiljevic and redshirt junior forward Sam Waardenburg.
– The Hurricanes held Missouri State without a point for the first 2:55 of the game.
– Vasiljeic has scored 12-plus points in each of Miami’s last three halves, including the second session of the outing against Quinnipiac, shooting 13-of-21 from the floor, 7-of-11 on 3-pointers and 5-of-5 at the line.
– In the 102nd outing of his career, Vasiljevic logged his 50th start, 46th double-digit scoring game and seventh 20-point performance.
– Vasiljevic is the first Hurricane to amass 25 points in a game since Anthony Lawrence II had 27 against Pittsburgh on March 5, 2019, as well as the first to do so away from home since Lykes scored 26 at Wake Forest on Feb. 26, 2019.
– McGusty, who compiled his 32nd double-digit scoring output and , eclipsed 1,750 minutes played, 150 rebounds and and 100 made free throws as a collegian.
– Freshman guard Harlond Beverly surpassed both 50 points and 100 minutes played in his young career.
– Lykes tallied his 48th outing with 10-plus points and reached 75 steals as a Hurricane.
– Miller moved past 50 rebounds in his Miami tenure.
– Miami posted its second-best total this season in free-throw percentage, makes and attempts, after finishing 15-of-17 from the line, an 88.2 percent clip.
– The Hurricanes have scored exactly 74 points in three of their first five games of the season.
– The last time a Miami opponent had 15-plus rebounds before Da Silva was Feb. 20, 2016, when North Carolina’s Brice Johnson pulled down 15.