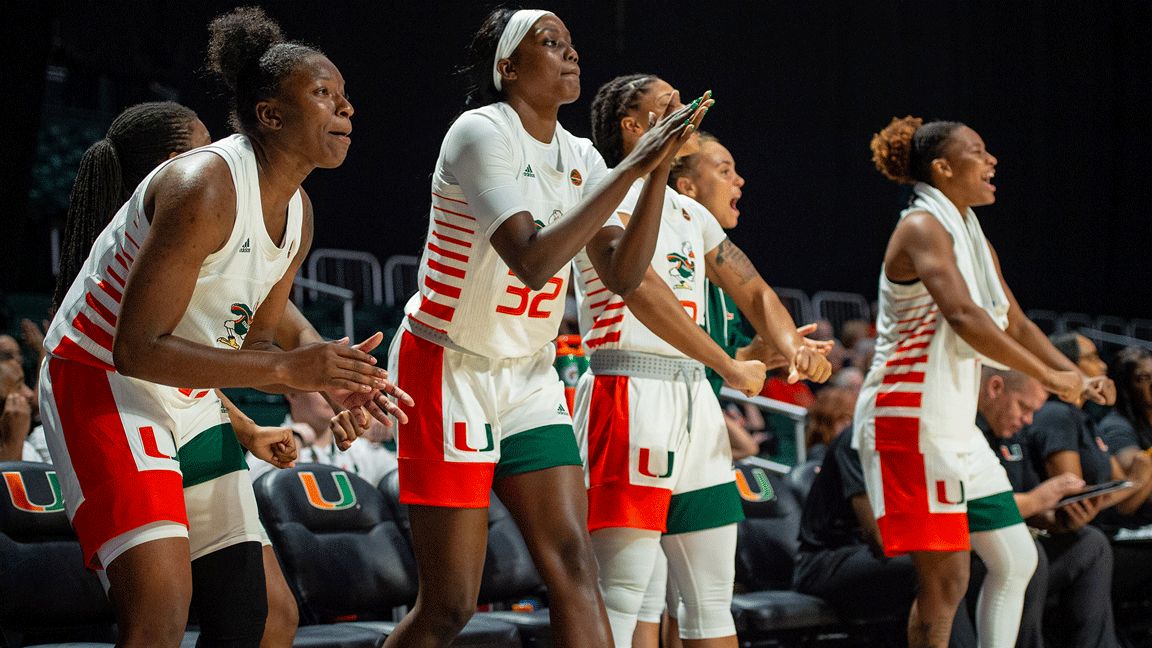 CORAL GABLES, Fla. – They’ve made 10 straight postseason appearances. Their roster features the preseason ACC Player of the Year. And they’ve notched at least 20 wins in 10 of the past 11 seasons under a veteran coach who has helped reshape the Miami program.

No wonder the Hurricanes, once again, face some high expectations.

When Miami’s women’s basketball team takes the floor at the Watsco Center on Sunday for its season opener against Jackson State, it will do so ranked as the No. 18 team in the nation in the Associated Press Top 25. The league’s coaches have picked the Hurricanes to finish fourth in the ultra-competitive ACC. And redshirt senior Beatrice Mompremier, who averaged 16.7 points and 12.2 rebounds last season, has collected a bevy of individual honors herself, including recognition as both a preseason AP All-American and the preseason ACC Player of the Year.

Now, the Hurricanes say, it’s time for Miami to prove it is worthy of all the accolades and for this new crop of players to add to the Hurricanes’ history of success.

“I believe this team, if we come out every night, focused and ready to play, we’ll continue to be the team everybody believes that we are,” said junior guard Endia Banks. “We’ve got five juniors that have been here and played in games. We’ve got five freshmen that are coming in and contributing to everything we do. … We really can be the team everyone wants us to be, as long as we come out and give it our all every night.”

With all the talent and depth on the roster, Hurricanes coach Katie Meier has discovered early on that one of her biggest challenges this season will be putting together effective lineups to handle the challenges Miami will face this season.

Add in four more promising freshmen and a core of veterans who contributed as Miami put together a 25-9 season and an NCAA Tournament run and it’s easy to understand why Meier has spent plenty of time in recent weeks analyzing which of her players will work together best in certain situations.

“The freshmen bring a lot of answers to some of our needs, but obviously, we return a lot of talent. So, it’s a matter of how do you blend it all? How do you maximize the depth? I’ll have to do a lot of lineup studying because whoever’s been playing with a great sense of urgency is what’s going to pop out at me,” Meier said. “Nobody’s taking anything for granted. Nobody’s too casual and seeing that urgency has been exciting for me. In our exhibition game, I was demanding it and you saw it. I want them to play with pressure. I’m not going to take that away, so whoever can handle that is going to be very successful.”

Along with working to find ways to maximize the talent on Miami’s roster, Meier believes another challenge facing her team as it prepares for the season is discovering which of the Hurricanes will step up to fill the leadership void left by the departures of Laura Cornelius and Emese Hof, both of whom set the tone for Miami on and off the court last season.

To help on that front, Meier has been having weekly leadership training meetings with Mompremier and Miami’s juniors. Each, Meier said, expressed a desire to step up as a leader, but the coach wants to make sure her players understand what that truly entails.

“In their own words, they basically said, all five of them, that they wanted to lead, but they weren’t sure how,” Meier said. “And I said, ‘Wow. That’s awesome. You guys willing to do this with me then?’ and they said yes, so we’re doing it.”

Said Banks, “I know I have to be one of the team’s leaders. I tried to shy away from it a little bit, but eventually, I just stepped up and accepted it. We need to get everyone together and huddling. But it can’t just be me. We’re all juniors. We all have places where we can fit in. I’m the disciplinarian. Kelsey’s the one who goes and cuddles people. Beatrice is the silent leader. She’ll whisper in your ear or tell you real soft and then go about her business. Mykea [Gray] is the same type of way and Taylor [Mason] is like a dog out there. We all have our different ways of leading and we have to bring it together.”

If all of that comes together, Meier – like her players – believes the Hurricanes can be successful again and keep that postseason streak going.

“You talk about culture, but I think it’s also more like a routine,” Meier said. “We know this has worked. This formula is good. Trust us on game day when we ask you to behave this way and it helps. In recruiting, people are now choosing to be part of a winning program that plays a lot of players. We have a history. We’ve shown it works and I think we’ve got the athletes this year for that system to continue working.”