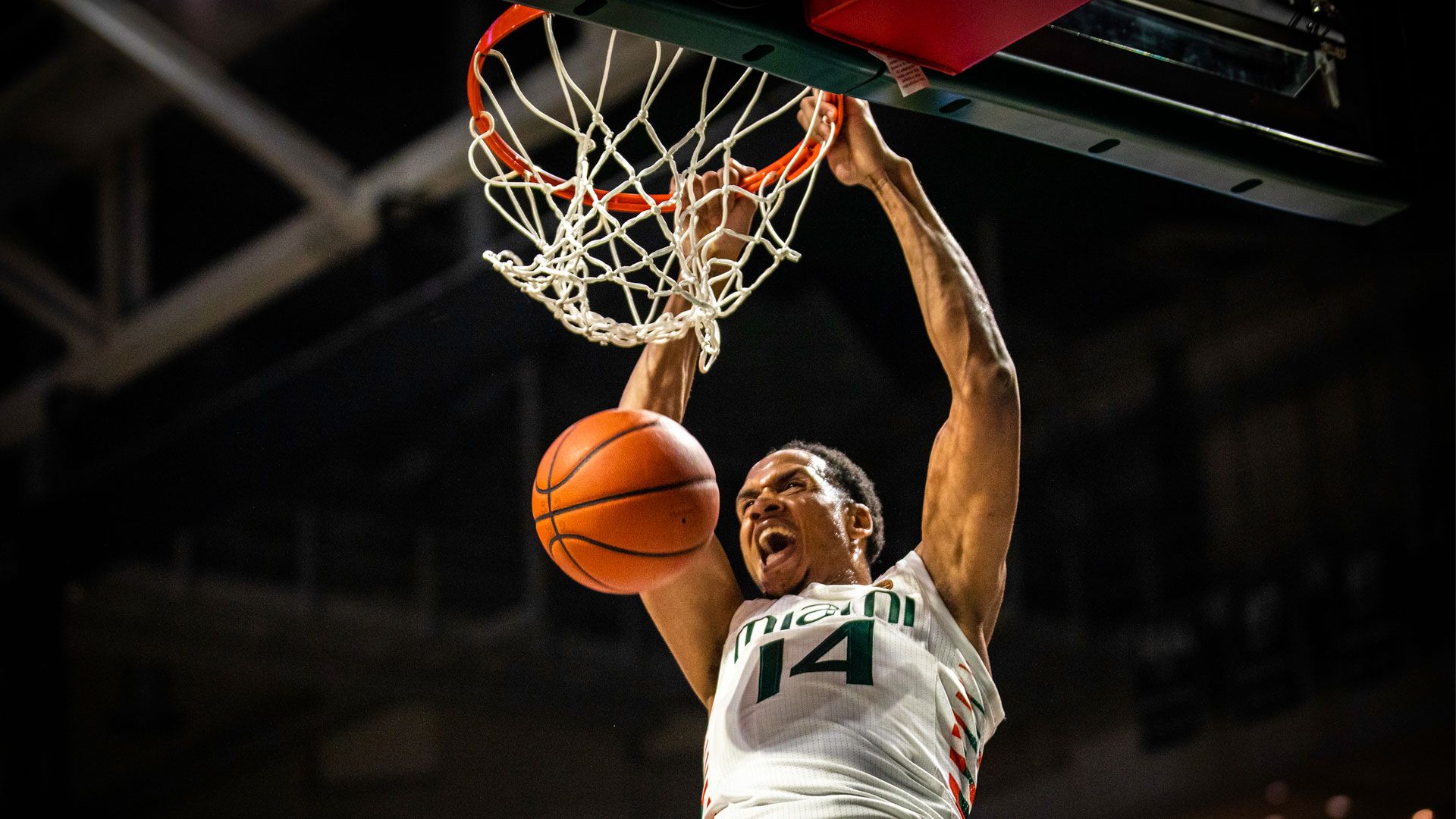 “I thought, offensively, the ball was shared quite frequently,” Larrañaga said. “I’d like to shoot the three a little bit better and get to the foul line a good bit more. The only way to do that is to move the defense and create an advantage; we haven’t learned to do that well enough.”

Neither team led by greater than three points in the first 17-plus minutes of the opening half until an 8-0 surge in 1:34 put Miami ahead by nine, 33-24, with 1:14 to go before the break. The Hurricanes went on to take a 35-26 edge into the intermission.

Redshirt junior forward Sam Waardenburg tallied team highs in points (nine) and rebounds (seven) before the break, while redshirt junior center Rodney Miller, Jr., scored more points in the opening half (eight) than he previously totaled in any full game. Defensively, Miami held the Owls to just 11-of-35 (31.4 percent) shooting in the first 20 minutes.

Miami, however, responded with a 16-2 run to stretch its edge back up to a game-best 17, 67-50, with 5:08 to play. The spurt was capped by back-to-back 3-pointers by freshman guard Harlond Beverly and senior guard Dejan Vasiljevic.

“I think any time a team makes a run and you respond to it, that’s a very good sign that you pulled together instead of pulling apart,” Larrañaga said. “When you come together, guys are willing to do what’s necessary to win the game and our guys did that tonight.”

The Owls never pulled any closer than 14 the rest of the way and that proved to be the final margin of victory for Miami.

Beverly scored 14 points on 6-of-9 shooting in his second collegiate game, while redshirt junior center Rodney Miller, Jr., logged a career-best 12 points on 5-of-6 shooting for his first double-digit outing.

Waardenburg finished the game one point shy of his first double-double, notching nine points and a career-best 11 rebounds, the latter mark leading all Hurricanes.

Up next for the Hurricanes is another in-state clash, as Miami is set for its road opener Tuesday at 9 p.m. against UCF at Addition Financial Arena in Orlando, Fla., live on CBS Sports Network.

MIAMI HURRICANES POSTGAME NOTES
– Miami improved to 24-1 all-time against the Owls, including 16-0 at home and 4-0 in Larrañaga’s tenure.
– This is the 21st time the Hurricanes have defeated Florida Atlantic by double figures and the average margin of victory across all 24 wins is 18.9 points per game.
– Miami’s 24 victories against Florida Atlantic are tied with Boston College and Florida for its fourth-most against any Division I foe, trailing only Stetson (49), Florida State (36) and Jacksonville (27).
– Larrañaga, who entered the evening with the 10th-most victories of any active Division I coach, is now 646-432 in 36 years as a head coach, including 176-98 in nine seasons at Miami.
– Larrañaga improved to 100-31 (.763) in home games at the helm of the Hurricanes, including 51-8 (.864) in non-conference action.
– For the second time in as many games this season, Miami used a starting lineup of Lykes, Miller, Jr., Vasiljevic, Waardenburg and redshirt junior guard McGusty.
– Vasiljevic recorded two made 3-pointers to up his career total to 205, passing Adrian Thomas for sixth place on Miami’s all-time list.
– Waardenburg, who totaled all of his points in the first half and matched a career high with four made field goals, reached 250 points in his college career.
– Lykes surpassed 850 total points and recorded the 45th double-digit scoring game in his 66th outing as a Hurricane.
– Miller, Jr., reached 50 points as a collegian, 18 of which have come in the first two games of the 2019-20 season, as well as posted the first two assists and steals of his career.