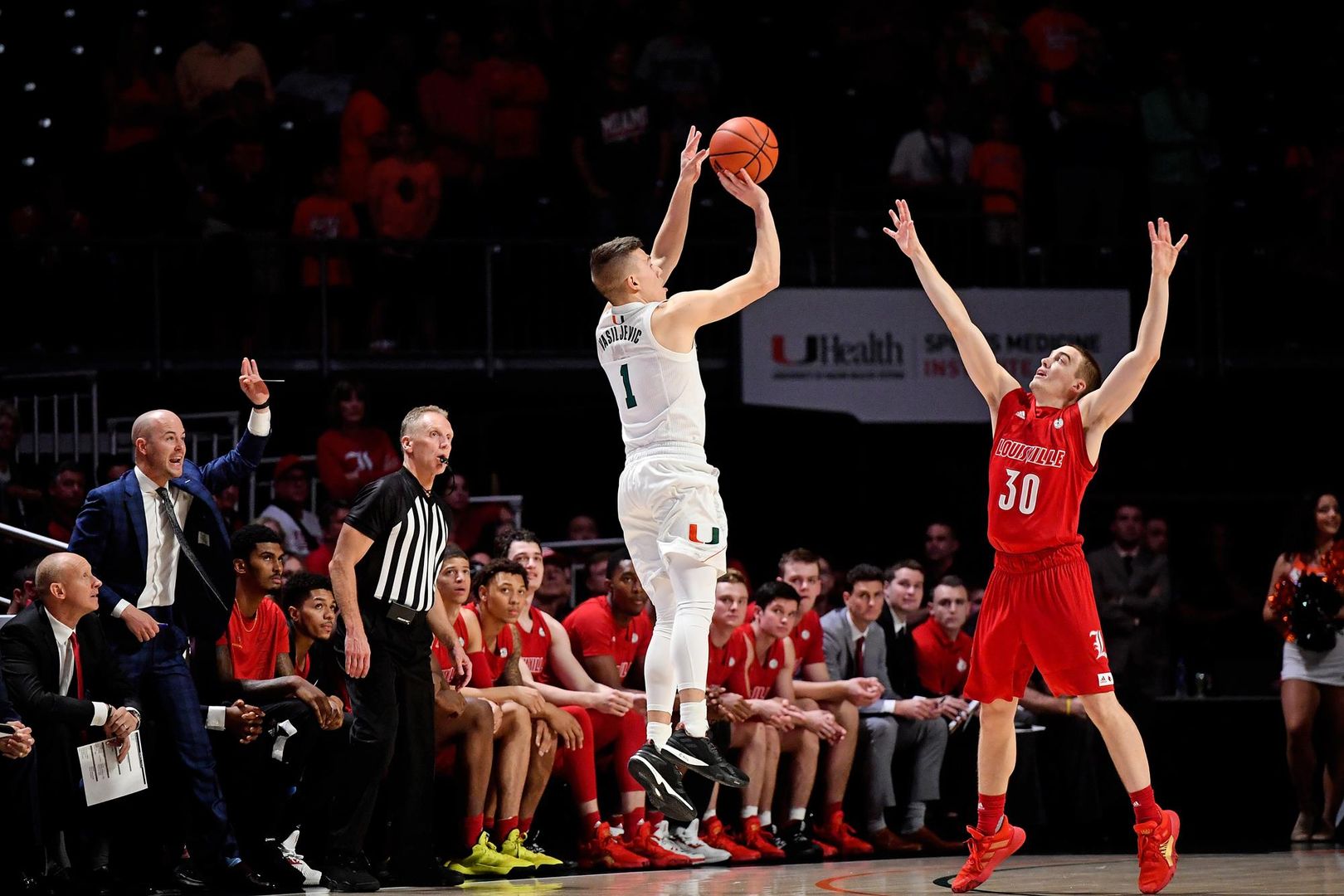 “Well, I thought Louisville’s defense was outstanding, especially in the first 30 minutes,” Miami head coach Jim Larrañaga said. “They combined terrific defense with really running their offense extremely well. They have got a lot of veteran guys, and they found the open man and made shots. They certainly deserve their high ranking.”

Louisville junior forward Jordan Nwora, the Preseason ACC Player of the Year, scored 18 of his game-high 23 points in the second half to help the Cardinals maintain their separation. Miami closed the contest on a 14-0 run in the final three minutes to make it a 13-point final margin.

Senior guard Dejan Vasiljevic totaled 16 points on 6-of-10 shooting, including a 4-of-7 mark from 3-point range to become the eighth Hurricane with over 200 makes from long range in a career and the fourth with over 100 in ACC play.

Nwora added a co-game-high 12 rebounds to his leading point total to finish with a double-double. Redshirt senior center Steven Enoch also posted a double-double for the Cardinals with 11 points and 12 boards.

Miami will be back in action on its home court Friday at 7 p.m. when it takes on Florida Atlantic, live on RSN.

MIAMI HURRICANES POSTGAME NOTES
– Miami fell to 4-12 all-time against Louisville, including 4-6 at home, 2-5 since the Cardinals joined the ACC and 2-5 under Coach L.
– Jim Larrañaga, who entered the season tied for the ninth-most victories of any active Division I coach, is now 645-432 in 36 years as a head coach, including 175-98 in nine seasons at Miami
– Miami used a starting lineup of Lykes, McGusty, Miller, Vasiljevic and redshirt junior forward Sam Waardenburg.
– Vasiljevic scored the first points of Miami’s season on its first possession with a 3-pointer, the 200th of his career, 47 seconds into the game.
– Vasiljevic moved into seventh place on Miami’s all-time list of 3-point makes with 203, passing Davon Reed, and reached 300 made field goals as a Hurricane.
– McGusty eclipsed 600 points in his collegiate career, which includes two seasons at Oklahoma.
– Lykes notched the 44th double-digit scoring outing of his career, while Vasiljevic recorded his 43rd, tallying 10 points in the first 17 minutes, and McGusty had his 29th.
– Four Hurricanes saw their first official action and tallied their first points in a Miami uniform: McGusty, Walker, Wong and freshman guard Harlond Beverly.
– Nwora and Enoch became the first pair of teammates to log double-doubles against Miami since Duke’s RJ Barrett and Marques Bolden did so March 2, 2019.
– This is the first time Miami has dropped a season opener since 2013 when it fell to St. Francis Brooklyn, 66-62, in overtime.
– Miami not only opened with a league game for the first time ever, but started with a high-major (ACC, BIG EAST, Big 12, Big Ten, Pac-12 and SEC) opponent and a ranked opponent for the first time since 1987 (No. 9 Michigan).
– This was the earliest season opener in program history, surpassing the Nov. 8 start date in 2013.