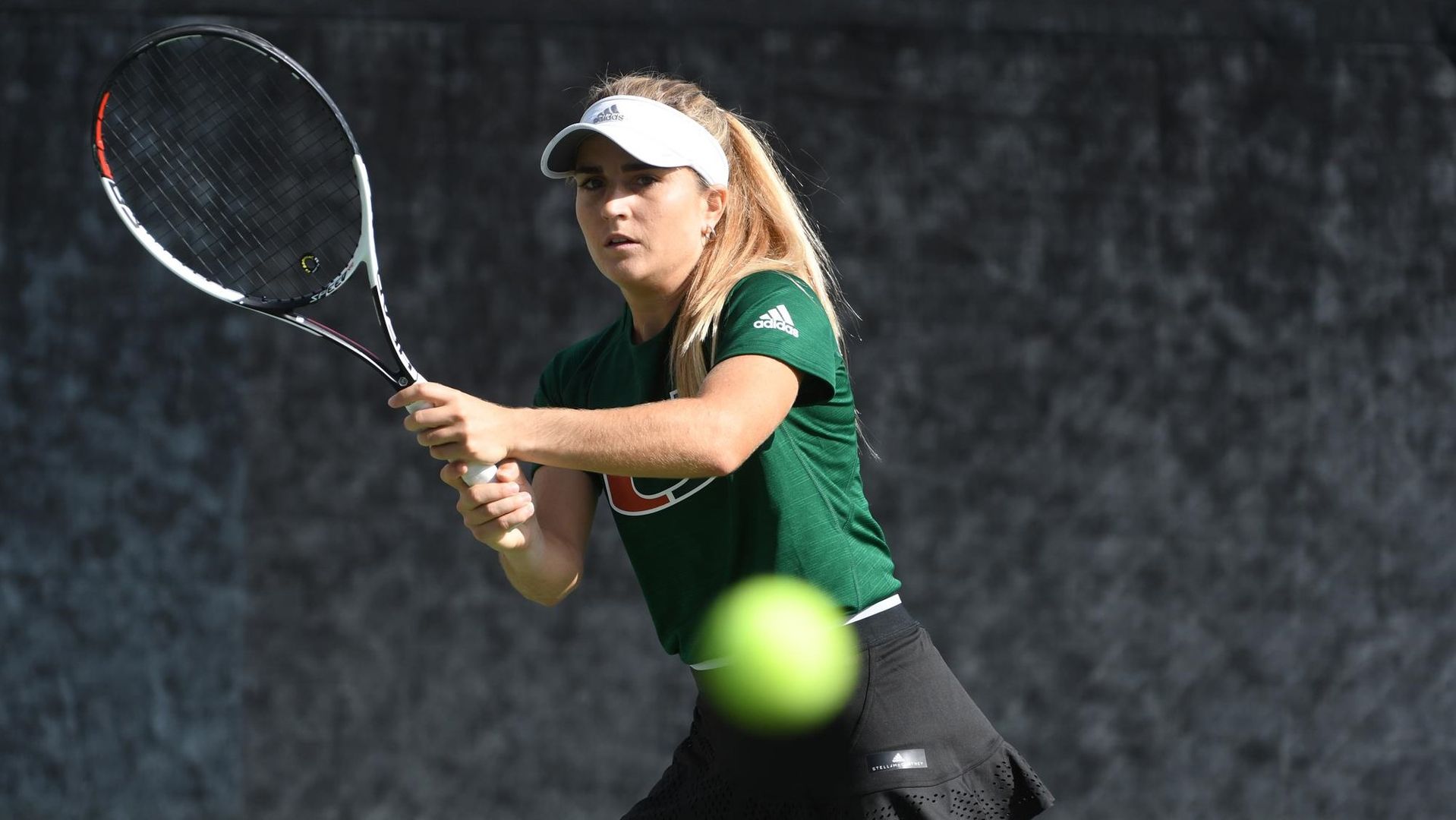 TYLER, Texas – Estela Perez-Somarriba of the University of Miami women’s tennis team had an outstanding showing this week at the Tyler $80K.

Competing as an amateur at the Tyler Athletic and Swim Club, Perez-Somarriba played her way into the main draw of the event and then logged a top-200 WTA victory once there.

“Estela is coming back home with a couple of great wins under her belt,” Miami associate head coach Laura Vallverdu said. “She has continued to grow as an athlete this week, which was the goal.”

After receiving a wild-card spot in the qualifying draw, Perez-Somarriba met ninth-seeded Claire Liu, ranked No. 390 in the world, Monday in the opening round. The American, who won the 2016 Wimbledon Juniors title and reached the second round of the US Open and Wimbledon last year, took the first set, but Perez-Somarriba fought back for the win, a 6-7 (1-7), 6-4, 1-0 (10-2) decision.

For the second Tuesday in a row, Perez-Somarriba then clinched a spot in an $80K main draw, this time by defeating WTA No. 680 Chanelle Van Nguyen, a former UCLA standout. Perez-Somarriba lost the first set to the American, but once again took a three-set decision, this time in a 2-6, 6-4, 1-0 (12-10) result on her fourth match point opportunity.

Rain canceled Wednesday’s competition, so Perez-Somarriba resumed play Thursday against WTA No. 189 Anhelina Kalinina, who made the second round of the 2018 US Open. The Miami senior needed just two seats to defeat the Ukraine native, tallying a dominant 6-2, 6-4 triumph over the top-200 foe.

Following the impressive win over Kalinina, Perez-Somarriba saw her run come to an end Friday against WTA No. 116 Whitney Osuigwe, an American who competed in the US Open and Australian Open this year. Despite a valiant effort, Perez-Somarriba dropped a 2-6, 4-6 result to the tournament’s fourth seed.

In addition to Perez-Somarriba being in Texas alongside Vallverdu, former Miami standout Stephanie Wagner also competed at the Tyler $80K. The three are all top-five in singles wins in Miami history, as well as sport a combined 11 ITA All-America honors and five NCAA Final Four berths.

Perez-Somarriba will now resume play in college tournaments, as she is set to wrap up the fall Nov. 6-10 at the Oracle ITA National Fall Championships in Newport Beach, Calif.

“We are excited to head to Newport next week and end her season on a high note,” Vallverdu said.”