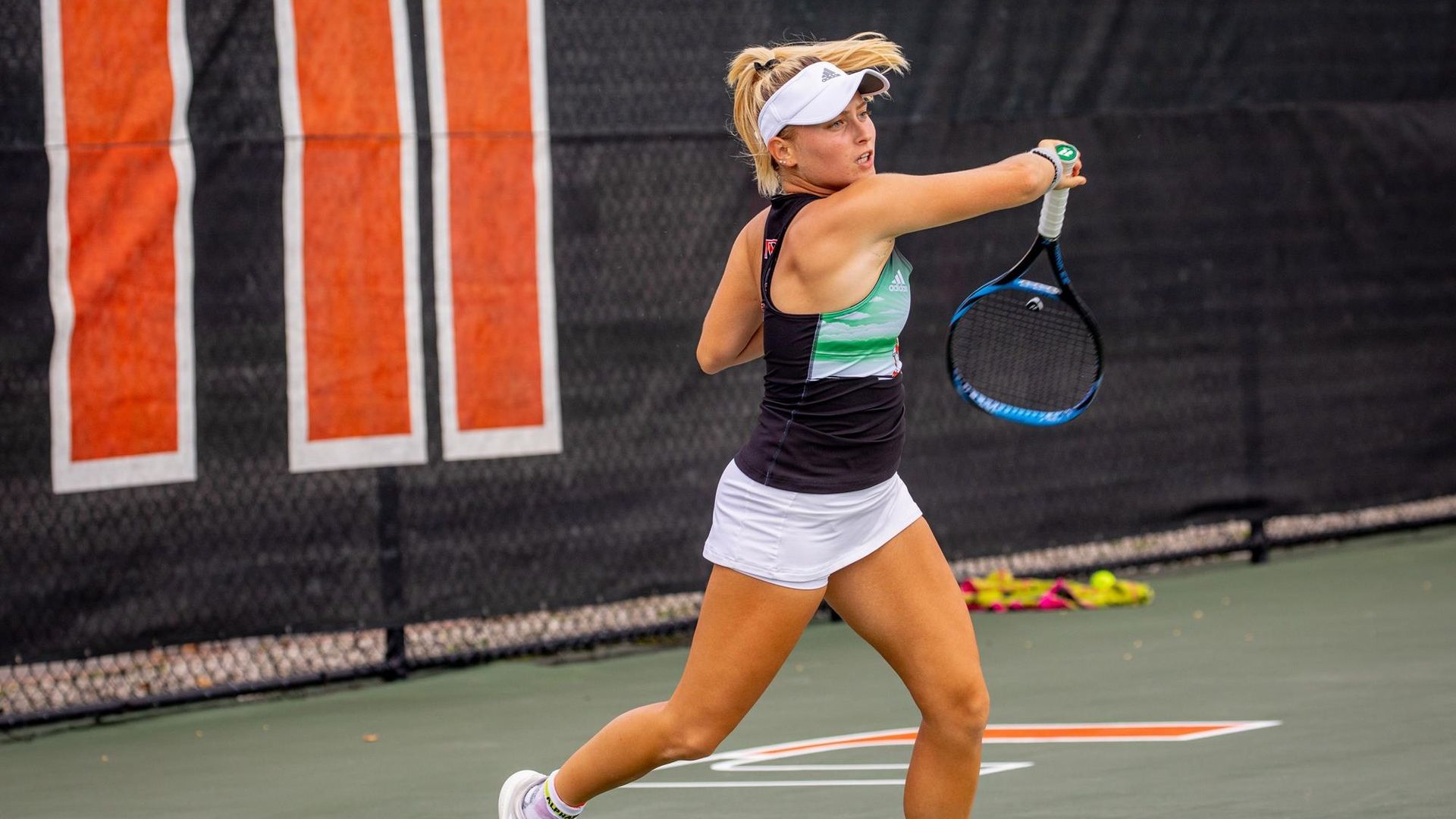 CORAL GABLES, Fla. – The University of Miami women’s tennis team turned in a dominant showing on its home court Friday to begin the 2019-20 season in dazzling fashion.

Five Hurricanes combined to post a 10-1 record, including a 9-1 ledger in singles action, on the opening day of the Miami Fall Invite at the Neil Schiff Tennis Center.

“This is a fun group, they were excited to compete,” Miami head coach Paige Yaroshuk-Tews said. “We want to play. Happy to get out there, happy to have a great first day.”

The tournament started with doubles competition, which featured two weather delays for a total of 50 minutes, and just one duo took the court for Miami. Senior Yuna Ito and sophomore Lucia Marzal notched a 6-3 decision over Georgia State’s Andreea Stanescu and Aleksandra Stromova for the Hurricanes’ first victory of the season.

After a two-hour delay early in singles action, second-ranked Estela Perez-Somarriba returned to the court and needed just seven minutes to finish off Georgia State’s Angel Carney. The reigning national champion posted a 6-1, 6-1 tally to begin her senior campaign.

Needing to rally back from a 5-6 second-set deficit, Marzal did just that to defeat FGCU’s Satomi Momose, 6-2, 7-6 (7-3). Freshman Nada Dimovska, in the first action of her college career, followed suit with a dominant 6-1, 6-0 win against Mara Pop of Georgia State.

Ito capped off a perfect opening round of singles action for the Hurricanes by defeating Georgia State’s Aleksandra Stromova, 6-3, 6-2. Then, to begin the second round of competition, Perez-Somarriba picked up another straight-set win, topping FGCU’s Sara Kelly, 6-4, 6-2.

Marzal turned in the first ranked triumph of the year by a Hurricane, registering the fourth such decision of her career by rolling past No. 103 Eva Chivu of Georgia State, 6-0, 6-1. The lone game she dropped in the stellar performance came on a deciding point.

Shirokova suffered the first defeat of the season by a Hurricane, coming up just short in her comeback bid against Florida Atlantic’s Loui McLelland in a 5-7, 6-4, 0-1 (9-11) decision.

Ito got Miami back to its winning ways by easing past Maya Ornberg of FGCU, 6-1, 6-0, marking the third singles match of the day in which a Hurricane dropped just one game. Dimovska then wrapped up the day with another thorough victory, downing Florida Atlantic’s Lauren Randle, 6-2, 6-1.

“Really happy with Nada’s start. It’s not very often that you see a freshman hit the courts like she did today,” Yaroshuk-Tews said. “She raised her level; I haven’t seen Nada play this well. So, I commended her in the team meeting, [saying] that you want to be a match player, not a practice player.”

Saturday’s action will open with doubles play at 8 a.m. Ito and Marzal meet No. 55 Whitney Hekking and Madison Tattini of Utah, while Dimovska and Shirokova face Ida Ferding and Lourdes Ramalle of FGCU.

Singles competition will begin not before 9 a.m., with four Hurricanes set to play in the semifinals of their respective draws. Perez-Somarriba takes on Natalia Boltinskaya of Florida Atlantic, while Marzal and Ito square off in the other matchup of the Orange bracket.

Dimovska’s opponent in the Green semifinals is not yet determined, as one match was left unfinished Friday due to weather, and Shirokova will take on Hekking in a consolation contest.