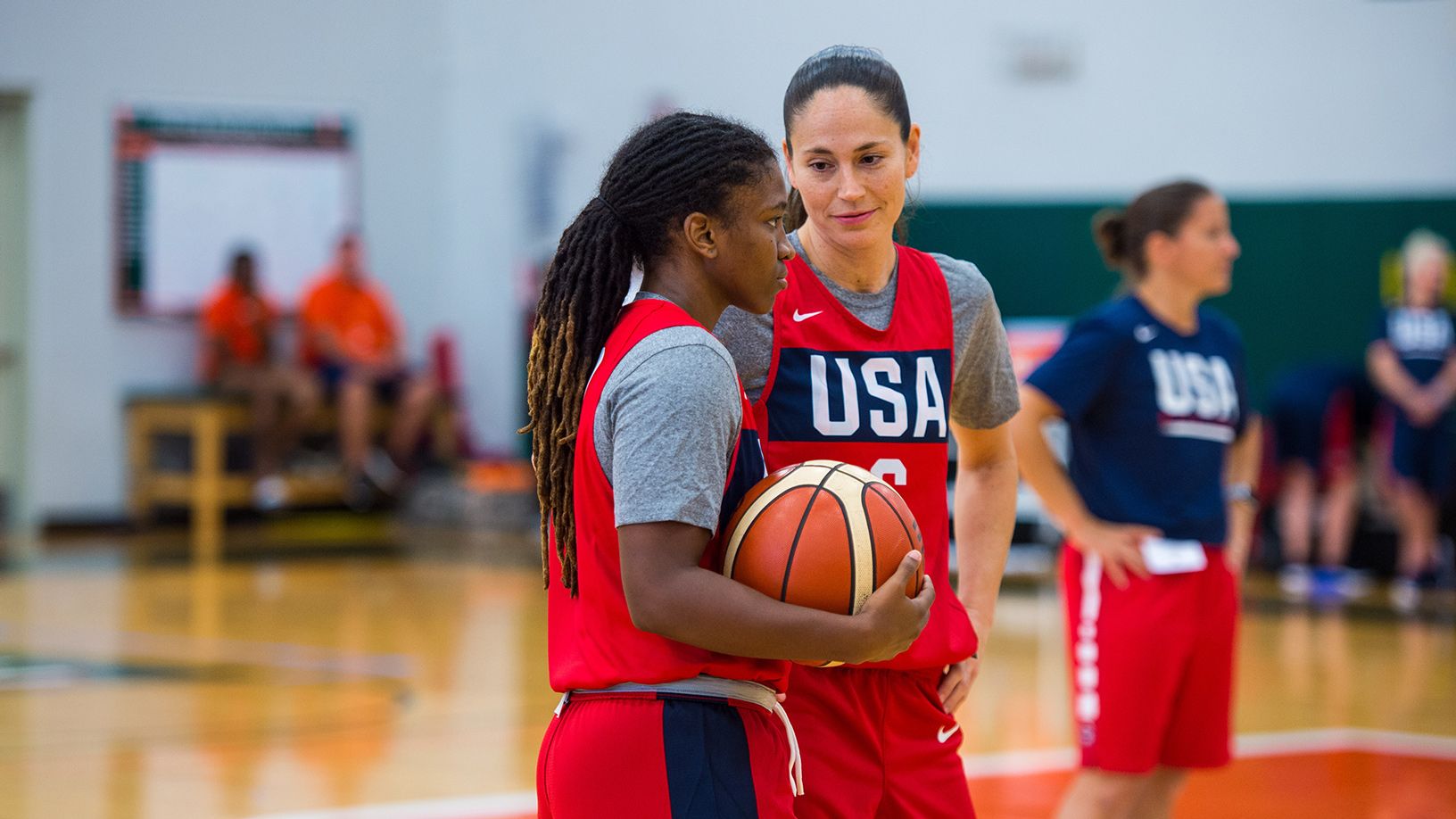 CORAL GABLES, Fla. – Mykea Gray can’t even begin to imagine how many hours she’s spent on the practice court at the Watsco Center Fieldhouse; how many free throws she’s taken in the gym.

But Tuesday morning, the Hurricanes guard found herself in somewhat unfamiliar territory.

She may have been standing in a spot she knew well, but across from her, rebounding as she put up shot after shot was one of her heroes, Dallas Wings guard and former three-time All-American Skylar Diggins-Smith, who led Notre Dame to three Final Four appearances and is regarded as arguably one of the best players in that program’s storied history.

Earlier that morning, Gray had run drills with several other members of the USA Basketball Women’s National Team, which is holding training camp at the University of Miami before heading to Puerto Rico for next week’s FIBA AmeriCup, a 10-team tournament where eight teams will earn berths in November’s FIBA Americas Pre-Olympic Qualifying Tournament.

She’d gotten personalized instruction from the likes of Seattle Storm guard Sue Bird and Phoenix Mercury guard Diana Taurasi. And before practice began, both Gray and Hurricanes forward Beatrice Mompremier spent time with two-time WNBA champion Sylvia Fowles, a Miami native who’d gave both collegians a pep talk of sorts before it was time for them to take the court with some of the best women’s basketball players in the world.

“To me, this is all still so unreal,” said Gray, one of seven college players who, along with Mompremier, is helping Team USA train before its trip to San Juan. “When Sue Bird says anything, I’m like, ‘Yes, yes, yes,’ even if I don’t know half the stuff she was saying. But just her being able to talk to me and teach me things, it was a shocker. I just tried to take it in and learn. And Skylar Diggins, wow. She used to be my favorite player. It was like, ‘Wow. I’m with the Skylar Diggins. That was amazing.”

Added Mompremier, “I’m just trying to take in everything they’re telling us. They’re veterans. They’ve been here before. Whatever they’re saying is going to be right in my book. I’m just really listening and taking it all in.”

As wide-eyed as they may have been Tuesday, Gray and Mompremier have some experience with the national program, Mompremier playing for Team USA in the Pan American Games this summer and both Hurricanes participating in the 2019 USA Basketball Women’s 3X3 National Championship in Las Vegas earlier this year.

“Just getting up and down the court, showing I could keep up with the pace and that I’m right there, that was probably the biggest shocker,” Gray said. “I thought to myself, ‘Maybe I do belong with the pros.’ But this isn’t over. We’ve got two days left. Today was tough. I’ve just got to take care of my body so I can push through the rest of these days.”

While Gray and Mompremier may have wondered how they’d fit in on Team USA, some of the group’s veterans said both more than held their own during the fast-paced, two-hour workout.

“It’s intimidating. I can remember the first time I stepped on the court with Lisa [Leslie], Dawn and Sheryl Swoopes while I was still a little kid in college,” Taurasi said. “I think they did great today. Not only did they compete, they showed well. They showed they belonged out here. And you know, [Wednesday], they’ll feel more comfortable. What a great opportunity for them to come out here and be able to do this, in their gym, at their school. It’s a pretty cool thing.”

Said Fowles, “I came in early and they were here with me and we were talking about what’s to be expected. I just let them know it’s going to be fast. Because we’re only here a couple hours, you’ll get thrown in the fire, but just be yourself. Make your shots. Don’t rush, because sometimes we tend to rush when we’re trying to keep up. I think both of them did an extremely good job. They played good defense, they scored some buckets, they made some great passes and I think Bea blocked a couple shots. They did well.”

Gray and Mompremier may be the only two Hurricanes on the floor this week with Team USA, but they won’t be the only Miami players learning from the best.

More than a few Hurricanes stopped into the gym to watch practice, a fact that made Miami coach Katie Meier – a former coach with USA Basketball herself – smile.

“I hope they’re watching,” Meier said. “The main thing you see is how much communication there is, how much positive talk. I think the really cool thing is to see Sue and Diana standing on the sidelines, coaching. They know what it takes. They know the goal. They know how to get it and they’re instructing. They don’t wait for a coach to talk and fix and solve things. And that’s what’s cool for me to see. Really cool.”