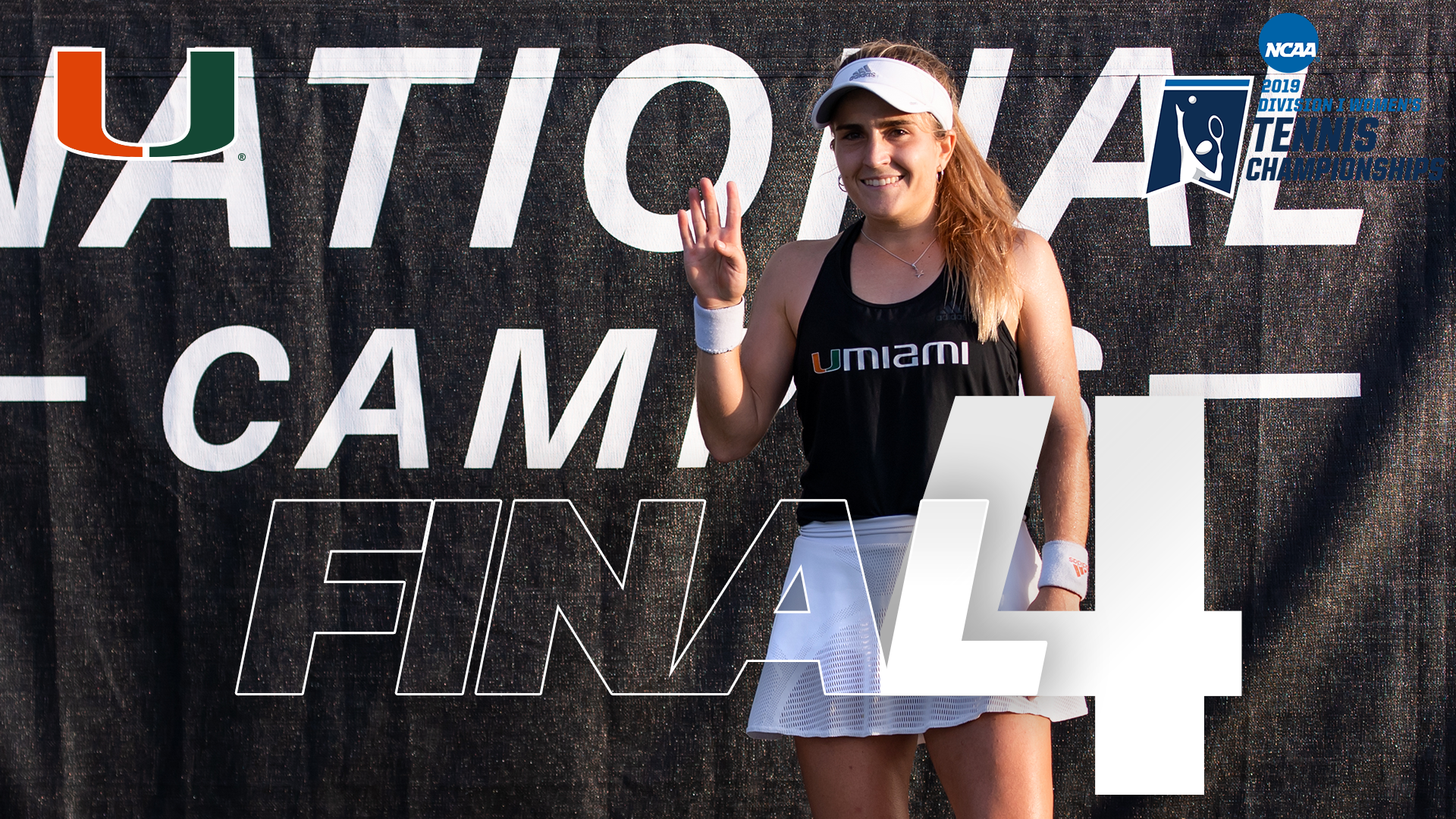 ORLANDO, Fla. – For the second time in three years, Estela Perez-Somarriba of the University of Miami women’s tennis team is headed to the NCAA Singles Championship Final Four.

The top-ranked and top-seeded player in the country, Perez-Somarriba defeated No. 43 Asuka Kawai of Illinois, 6-4, 6-4, Thursday evening at the USTA National Campus in the quarterfinals.

The junior joins Miami associate head coach Laura Vallverdu as the lone players in program history with two semifinal berths. Perez-Somarriba will face No. 46 Cameron Morra of North Carolina at 5 p.m. Friday for a spot in the title match.

“I think Stela took a little bit of time to get her rhythm, [but it was once] again another great match for a tournament,” Miami head coach Paige Yaroshuk-Tews said. “You’ve got to win them all different types of ways and we’re starting to see her [do just that]. I think that’s good. Moving forward, you put it in your back pocket and you gain confidence from it. So, all in all, a great day.”

After six consecutive holds to open the match, Perez-Somarriba recorded the opening hold to take a 4-3 edge in the first set. The Madrid native then extended her lead to 5-3, but Kawai fought off a set point at deuce in the ninth game to make it 5-4.

Perez-Somarriba capitalized on her second opportunity to close out the set, as she held to take the opener, 6-4.

“Once we got her . . . playing more aggressive and just playing the ball out of that girl’s strike zone a little bit better and having more of a first-punch mentality, she did a better job,” Yaroshuk-Tews said. “I’ve got to give credit to Kawai because she’s tricky. She serves big, the ball stays low, [she has a] big backhand [and is] streaky. So, she’s a tough player to get your rhythm against.”

Kawai, who defeated 2017 NCAA champion Brienne Minor in the Round of 32, won the first game of set two, but Perez-Somarriba countered with a pair of games to go in front, 3-2.

The next two games went to Kawai, who built a 4-3 edge. Service then went back to Perez-Somarriba and she seized control of the match from there on out.

Perez-Somarriba won each of the final three games, the only time in the match either player took three in a row, to close out the contest with a 6-4, 6-4 decision.

“Went down, 4-3, in the second and then just started ripping forehands, stepped up, took the first punch and didn’t let that girl take advantage of her first, which is what she needed to do,” Yaroshuk-Tews said. “To be able to do it up a set and down, 4-3, says a lot about her belief and confidence. I think, at that point, the match changed a little bit and then she was able to serve it out.”

Perez-Somarriba is set to make the 10th NCAA Singles Championship semifinal appearance in program history, including the ninth of Yaroshuk-Tews’ 18-year tenure and the fourth in the past five seasons. She is the 30th multiple-time semifinalist in the 38-year history of the NCAA Singles Championship, including the 18th from a school besides Stanford and fourth from the ACC.

The two-time reigning ACC Player of the Year upped her 2018-19 singles record to 41-5, taking sole possession of third place on Miami’s single-season leaderboard. In addition, she moved to 10-2 in her career in NCAA Singles Championship play, becoming the third Hurricane to reach double-digit victories.

“You’ve got to think that athletes learn from past experiences. I see a different look in her eye in this tournament than, for instance, we saw last year or even her freshman year,” Yaroshuk-Tews said of Perez-Somarriba having prior semifinal familiarity. “Of course, with each day, the stakes grow a little bit and it gets a little bit more interesting, but you’ve got to think that being in this situation before will do nothing but help her.”

Three ACC players advanced to the Final Four, as Perez-Somarriba, a 2017 semifinalist in Athens, Ga., and Morra are joined by No. 21 Kelly Chen of Duke, who is set to play second-ranked and second-seeded Katarina Jokic of Georgia.

The last time any conference had three semifinalists was 2016, when Miami’s Sinead Lohan was one of three to get there from the ACC.