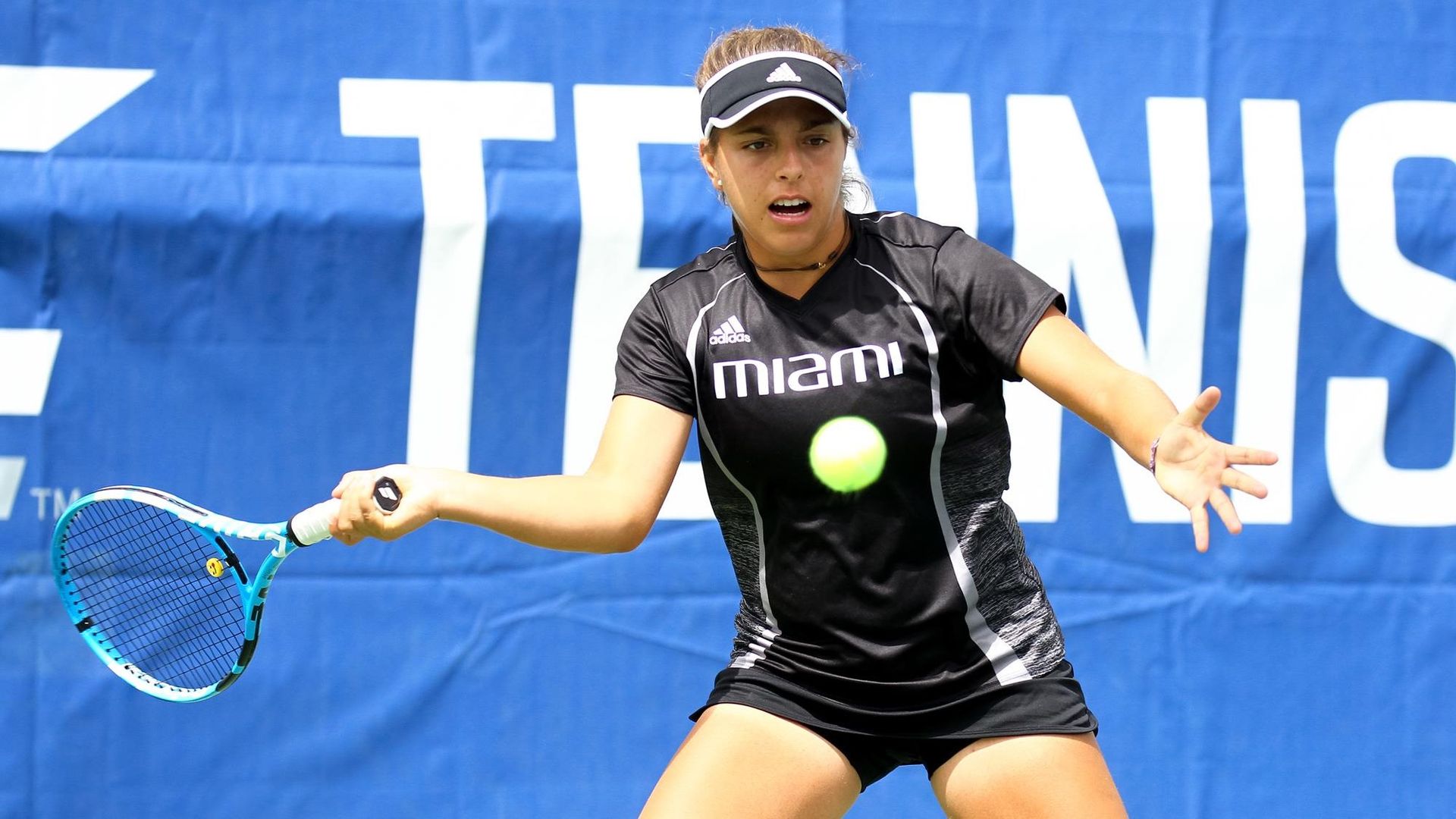 CARY, N.C. – The fifth-seeded University of Miami women’s tennis team rallied for victories after dropping the doubles point in its first two ACC Championship matches, but could not do so a third time.

“I think that UNC just played a great match. They completely outplayed us,” Miami head coach Paige Yaroshuk-Tews said. “When we played them [and lost, 4-3, on the road] during the season, it was their first match outside. They were a different team with a different ball coming at us. I have to give a lot of credit to UNC. If they keep playing like that, I don’t see many teams beating them.”

North Carolina (28-1, 14-0 ACC) got off to a fast start in doubles, as Sara Daavettila and Alle Sanford logged a 6-1 decision over Yuna Ito and Ana Madcur.

Sixth-ranked Makenna Jones and Cameron Morra eventually followed that with a 6-2 triumph over junior Estela Perez-Somarriba and sophomore Ulyana Shirokova, as the Tar Heels remained undefeated in doubles on the season.

In a top-20 matchup that went unfinished, Miami’s No. 16-ranked duo of freshman Daevenia Achong and senior Daniella Roldan held a 5-4 edge on seventh-ranked Jessie Aney and Alexa Graham.

No. 41 Morra doubled North Carolina’s lead to begin singles competition, as she recorded a 6-2, 6-1 decision over Roldan.

No. 118 Aney staved off a late comeback bid by Shirokova to post a 6-2, 6-4 win and move the Tar Heels one point from victory.

Seventh-ranked Graham clinched the match, as she took the final three games against Achong to seal it with a 6-2, 7-5 triumph.

When play was halted, second-ranked Perez-Somarriba held a 6-3, 2-5 edge on sixth-ranked Jones in a top-10 showdown.

“I think we made some changes in the second sets. We definitely made some adjustments,” Yaroshuk-Tews said. “That’s how we wanted to come out of the gates and, for whatever reason, we didn’t. I was happy with some of the adjustments we made, we just, unfortunately, made them too late.”

Saturday’s match marked the 11th time in its 15 years as a league member that Miami has reached the ACC Championship semifinals, including the fourth in a row. The Hurricanes now sport a 19-14 overall mark in the tournament, including an 18-12 ledger in Cary.

This was the first match in 2019 in which Miami did not log a point, just the second in which it did not tally multiple points and only the third it did not record at least three.

“Our first time as a team this season, I think, in kind of a big match situation, truly, [with this being the] semifinals of the ACC tournament,” Yaroshuk-Tews. “[There was] a lot going on and a lot they haven’t seen before. We didn’t play at National Indoors this year. We haven’t been in a lot of these situations, so I think it was a first for some kids. We could’ve, obviously, responded better, but a lot of credit to UNC.”

Miami will now await word on its destination for the NCAA Team Championship, as it is set to make a 24th consecutive appearance in the field.