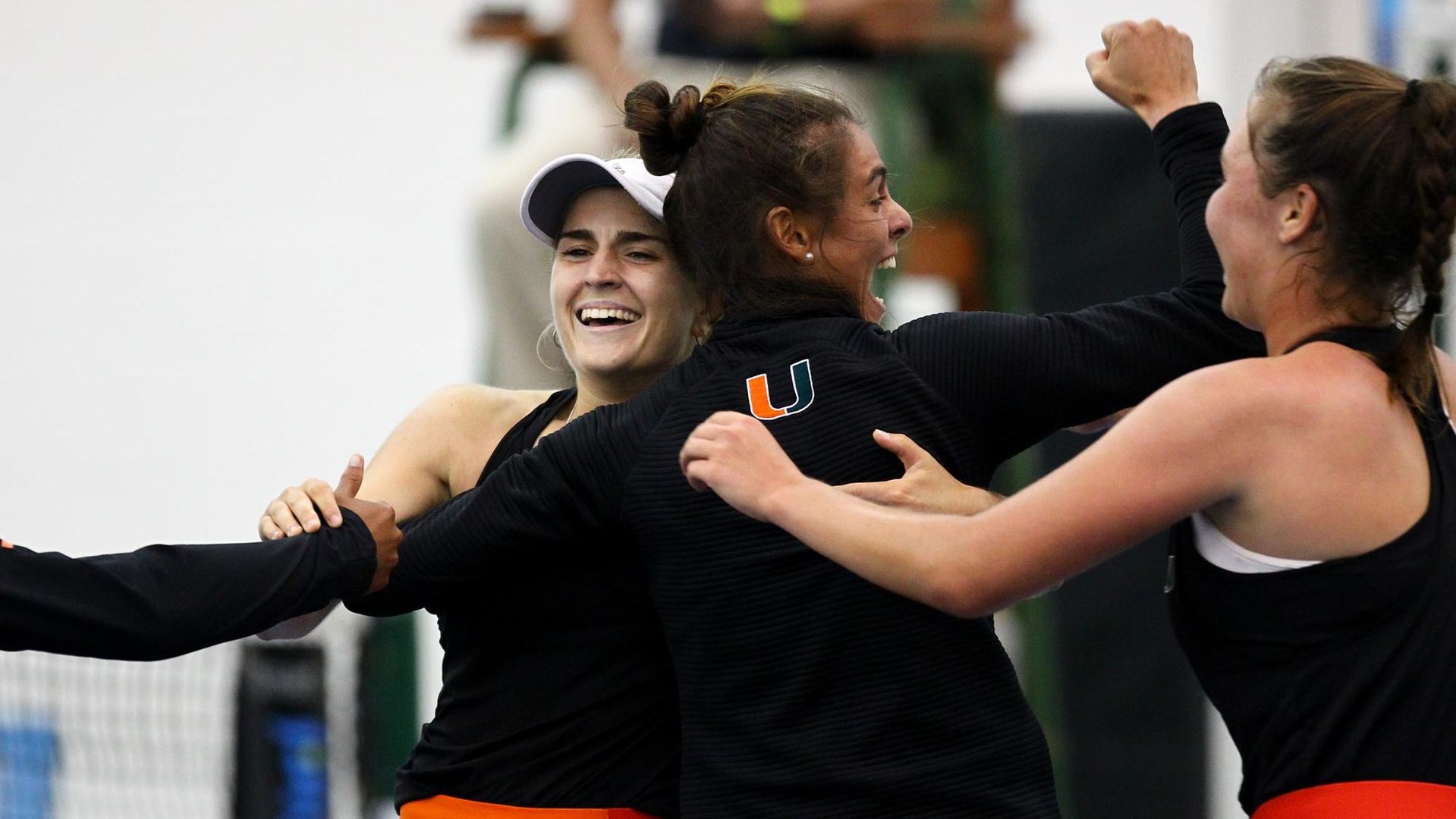 For the second straight day, fifth-seeded and No. 21-ranked Miami (18-6, 9-5 ACC) dropped the doubles point and then won four singles matches to advance. The Hurricanes’ triumph over fourth-seeded NC State inside Cone-Kenfield Tennis Center was its first of the season over a top-10 foe and fifth over a top-25 team.

Up next for the Hurricanes is a matchup with top-seeded and second-ranked North Carolina Saturday at 2 p.m. at Cary Tennis Park, live on ACC Network Extra.

“I believe that these young ladies are capable of moments like this and I’ve believed in them all year. I’ve gotten on them all year because we haven’t been connecting, we haven’t been completing and to see it happen today, in this scenario, [was great],” Miami head coach Paige Yaroshuk-Tews said. “No one would take Miami in this scenario today. I told the kids before the match started, it’s days like this why I coach and why I’ve stayed in this as many years as I have. It’s because I wanted to go to war with these kids in adverse situations.”

Just 12 minutes after doubles play began, action was halted for one hour and three minutes due to a tornado warning in the area.

After the teams returned to the court, NC State (22-6, 11-3 ACC) took control of two contests to earn the opening point.

When play stopped, junior Yuna Ito and senior Ana Madcur were in a 4-4 deadlock with Bianca Moldovan and Liz Norman.

Needing to win four singles matches, Miami took four of the six opening sets and eventually got splits in each of the other two matches.

“To come in here, in these conditions, I think we were a little bit shocked in doubles, quite honestly. The balls were coming off the court so fast,” Yaroshuk-Tews said. “Those girls play good doubles, they squeeze the middle. To get smoked and just turn it around in singles and truly bring great tennis to the table and compete in a big moment, that is what we’ve been talking about all year.”

Achong tallied Miami’s first point by recording the first top-75 win of her young career against No. 68 Smith, whom she lost to in three sets earlier this year. In a matchup of two of the ACC’s top rookies—they combined for nine ACC Freshman of the Week honors—the Geleen, Netherlands, native earned a 6-3, 6-2 decision.

For the second day in a row, freshman Lucia Marzal then gave Miami a 2-1 advantage, as she logged an identical 6-2, 6-2 result against Amanda Rebol.

Shirokova put the Hurricanes back in front for good by finishing off an impressive three-set victory against Moldovan, 6-3, 2-6, 6-3.

“As a coach, I’m so happy for them because they learned something about themselves,” Yaroshuk-Tews said. “We’re walking out of this facility as stronger women than we walked in and that’s what makes me happier than a win over a top-10 program.

Miami is now in the semifinals of the ACC Championship for the 11th time in its 15 years in the league. The Hurricanes sport a 19-13 all-time mark in the tournament, including an 18-11 mark in Cary.
In addition, Miami improved to 17-1 all-time against NC State, avenging its first loss to the Wolfpack earlier this season.

“I know we’re capable of beating teams like this. We’ve come close all season, but today we completed it in a big moment and a tough environment for us,” Yaroshuk-Tews said. “Words really can’t describe how happy I am for them because in order to believe it, you have to experience it in sports sometimes. So, today they earned that experience and now I think the ball is rolling. The future is going to be bright.”