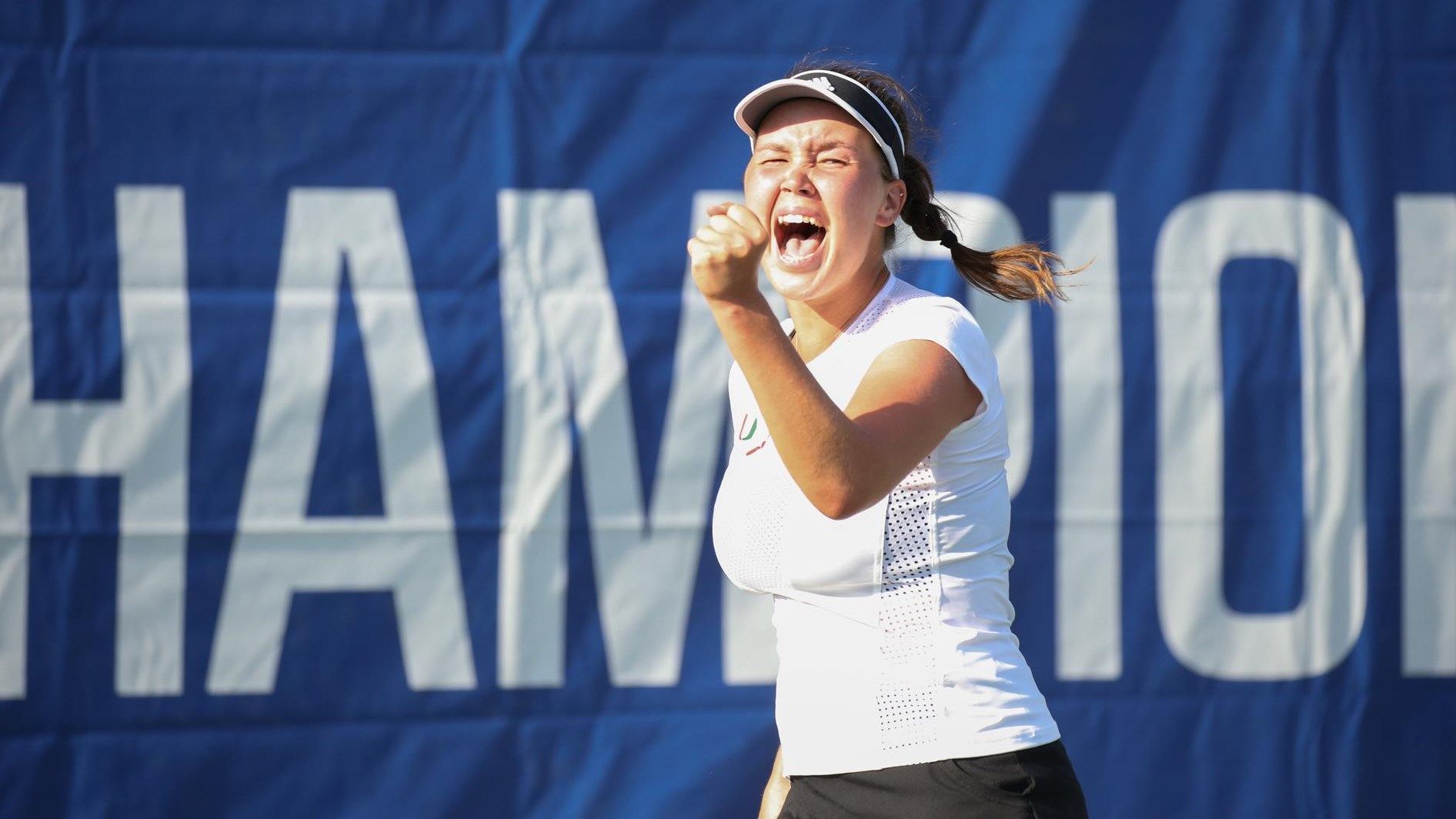 No. 21 Miami (17-6, 9-5 ACC) dropped the doubles point, but rebounded to take four singles matches in a hard-fought contest that lasted over three hours and 20 minutes. The Hurricanes advance to take on fourth-seeded and ninth-ranked NC State in the ACC Championship quarterfinals, with the match set to take place indoors Friday at 3 p.m.

“If you want to do anything in the postseason, it’s about bringing everything you did in-season and shining. If you’re going to play scared and play without energy and play afraid to lose, it’s going to end fast,”  Miami head coach Paige Yaroshuk-Tews said. “We were very lucky to get by today. Virginia Tech competed well. We were just, I think, playing to the level of the kids in front of us. I could break it down, player by player, to find positives, but the team effort—we figured it out, we got the job done and a postseason win postseason is a postseason win, but I’m not happy at all today with the way our team looked.”

The Hurricanes countered with a 6-3 victory from junior Estela Perez-Somarriba and sophomore Ulyana Shirokova over Nika Kozar and Nina Sorkin.

In the decisive match, senior Ana Madcur and junior Yuna Ito won back-to-back games to take a 5-4 lead, but then dropped each of the last three. The 7-5 triumph by Elizabet Danailova and Samantha Gillas gave the Hokies the opening point.

Second-ranked Perez-Somarriba evened the match with a quick 6-3, 6-1 decision against No. 88 Novotna, good for her 12th top-100 win of the spring.

“Stela prepares correctly every week. She keeps it pretty simple and pretty straightforward,” Yaroshuk-Tews said of the reigning ACC Player of the Year. “I think that when it’s time to do it in a big situation, on a big day, it’s a whole heck of a lot easier when you’re preparation is [the way] her preparation is.”

Freshman Lucia Marzal followed that by giving Miami a lead that it would not relinquish, as she topped Pinto, 6-3, 6-4.

All three remaining matches went to a third set, with Miami forcing two of the three splits. Shirokova was the first to win five games in the decisive set, but it was Ito who ultimately clinched the match.

The Kanagawa, Japan, native registered a 6-3, 6-7 (5-7), 6-3 decision versus Gillas to send the Hurricanes into the ACC Championship quarters.

This is the second year in a row Miami has opened postseason play by defeating a No. 13-seed Virginia Tech, last year topping the Hokies, 5-1, in the quarterfinals. With Thursday’s triumph, the Hurricanes are now 21-1 all-time against Virginia Tech.

In addition, Miami improved to 18-13 in ACC Championship action, including 17-11 in Cary. Yaroshuk-Tews’ team has reached the quarterfinals in every year of the tournament.

“This is no different than last week and if you make it different then this is what you get and you’ll have your butt handed to you,” Yaroshuk-Tews said of postseason play. “Those are decisions and . . . luckily, we had four kids make good decisions. We had a good handful of kids make bad decisions. That afforded us a [close] win, but overall, as far as a team goes, we’ll be on a first flight out if we play that way against NC State.”