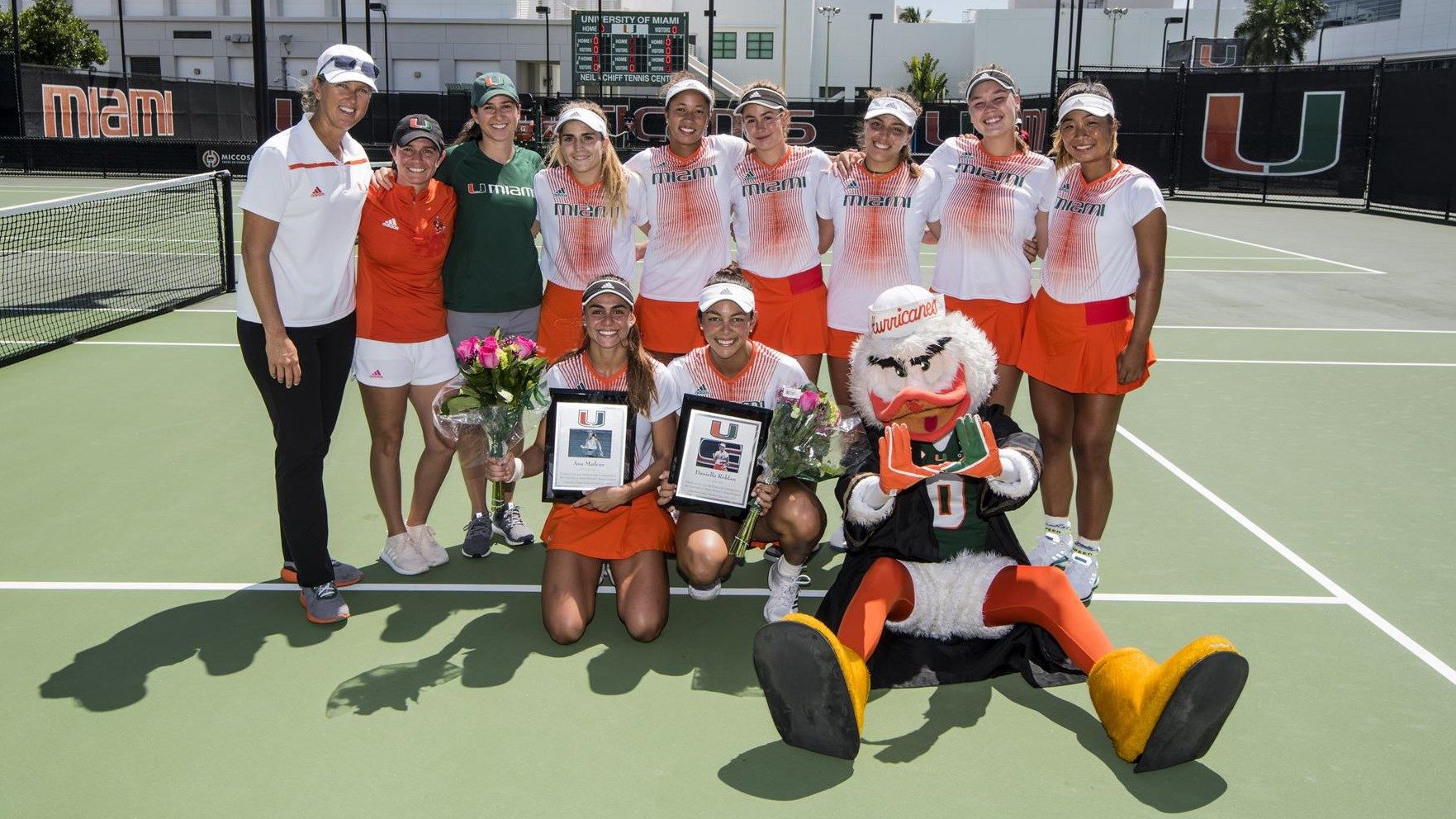 CORAL GABLES, Fla. – The University of Miami women’s tennis team concluded the regular season in style Saturday afternoon, logging a 6-1 victory over No. 19 Virginia at the Neil Schiff Tennis Center.

After honoring its two seniors, Ana Madcur and Daniella Roldan, No. 25 Miami (16-6, 9-5 ACC) picked up the first six points of the match and registered its third top-20 triumph of the spring.

“I have felt over the course of the last couple weeks that we’re competing better. We’re accepting coaching in matches better,” Miami head coach Paige Yaroshuk-Tews said. “We’re connecting with each other as a team, understanding how matches are won and understanding where matches turn. Winning a college tennis match and coming up with your point is an interesting process, coming from being an individual to a team. I feel like we’ve been burned in almost every situation this season and lately, the last couple weeks, I feel like these kids have been figuring it out. They seem more comfortable with the feel of the match.”

Madcur and junior Yuna Ito got Miami off to a strong start in doubles with a 6-1 victory over Hunter Blester and Meghan Kelley. The triumph was the 150th in combined singles/doubles play for Madcur, making her the 21st player in program history to reach that mark.

Vivian Glozman and Sofia Munera of Virginia (16-7, 8-6 ACC) held off a rally by junior Estela Perez-Somarriba and sophomore Ulyana Shirokova to even the doubles tally with a 6-4 decision.

All eyes then turned to the ranked matchup on Court 1, where Roldan and freshman Daevenia Achong, ranked No. 20, capped off a comeback win over No. 68 Chloe Gullickson and Amber O’Dell. The Miami duo took six of the final eight games to notch a 6-4 win and give the Hurricanes the opening point.

“The inside-in forehand from Roldan at 30-40 to close out the match was unbelievable. I told her she couldn’t play singles because she had to end on that ball,” Yaroshuk-Tews said with a smile.

Second-ranked Perez-Somarriba quickly doubled Miami’s lead with a dominant showing in a 6-1, 6-1 victory over No. 24 Kelley, her fifth top-25 triumph of the spring. The two games lost were her fewest since a 6-0, 6-1 decision against then-No. 58 Zoe Spence of then-No. 42 Notre Dame on March 15.

Freshman Lucia Marzal then upped the Hurricanes’ advantage to 3-0 with a 6-2, 6-4 win against Munera.

Ito followed that with a 6-3, 6-4 win over No. 90 O’Dell, her second ranked win as a Hurricane and her first in dual match competition.

Madcur tacked on the Hurricanes’ final point of the day by downing Camille Favero, 7-5, 6-2, in her last collegiate home match. The San Juan, Argentina, native was rushed by her teammates to celebrate after Favero’s final ball went long to conclude the match.

“Ana, she’s all fight, all heart, all about this program, all about her coaches and all about her teammates,” Yaroshuk-Tews said. “When you see a kid play a match [on senior day], you’re happy, but at the same time, you’re a little sad because you hate to lose a player like that.”

After Saturday’s decision, the Hurricanes have won five of their past six matches, including two over top-20 teams. They have outscored their foes by a 33-9 margin during those contests, including a 30-5 ledger in the five victories.

“We’re not focusing on the tennis; it’s not about tennis at this time of the year. It’s about managing heads, managing minds, keeping the enthusiasm high and ending strong,” Yaroshuk-Tews said. “Nobody cares what kind of season you have, it’s all about how you end. We’ve, for so long, been on the other end of that where we’ve had exceptional seasons and you’ve got to keep it going. It’s kind of a breath of fresh air, honestly. In our opinions, we haven’t had an amazing season, so we’re kind of right now starting to get it and keeping our foot on the gas. We’re just talking about being enthusiastic and enjoying it. They did that today. They did that on Thursday. I’m pretty happy with what I saw.”

With the regular season complete, the Hurricanes will now head to Cary, N.C., for the ACC Championship. Seeded fifth, Miami begins play Thursday against a to-be-determined opponent.